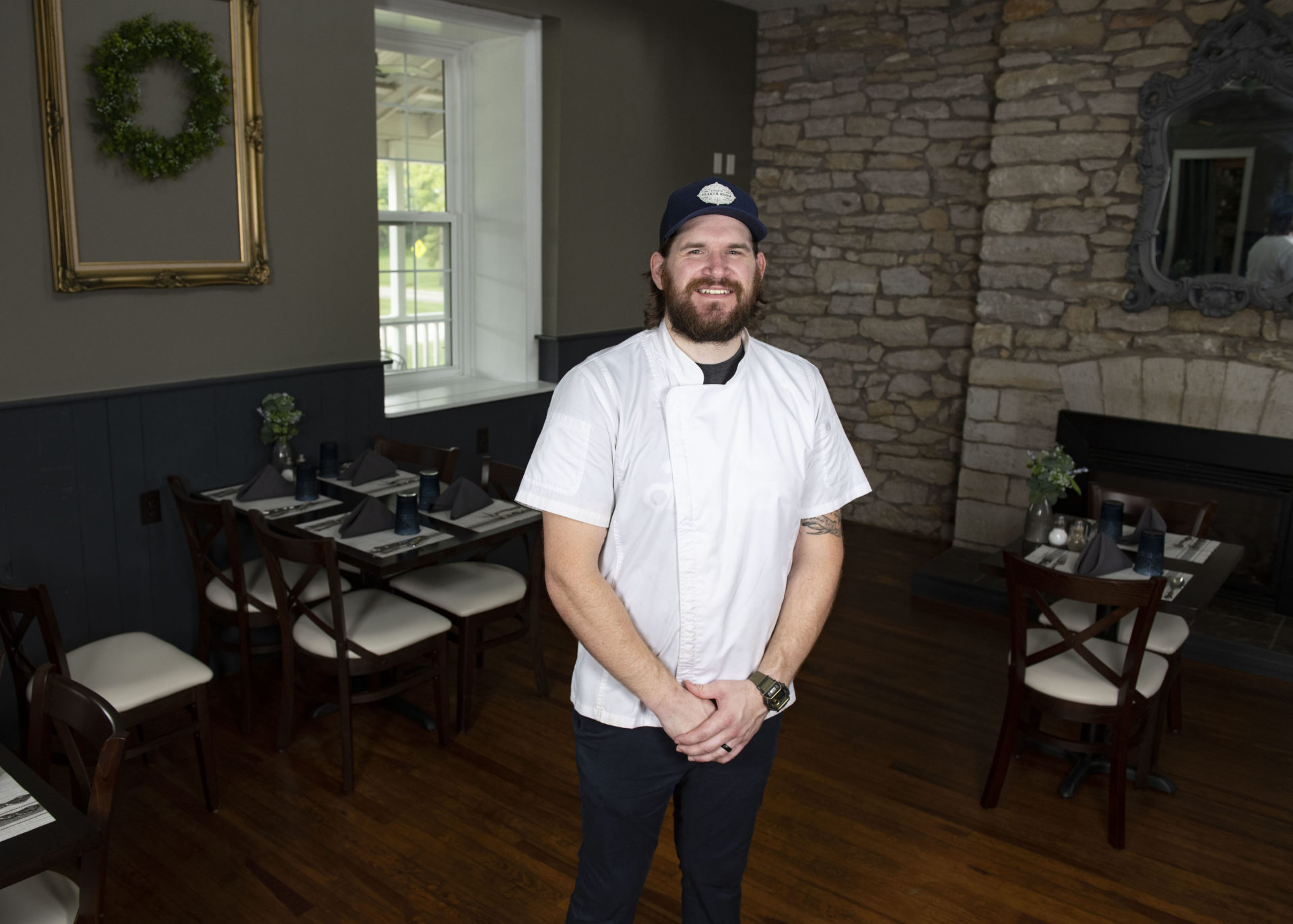 A chef, mixologist and former professional fighter, Coltin Cole may not have known his road would lead to Palmyra but he was always destined for the kitchen. Starting with summer cooking classes as an 8-year-old and eventually working his way through the St. Louis bar, brewery, restaurant and nightclub scenes in adulthood, he reached a point where he wanted to strike out on his own to start a bar and restaurant. He found what he was looking for online in the form of a nearly 200-year-old stone building surrounded by the Palmyra Greenwood Cemetery and soon to become Cole’s Hearth Room.

“I was looking for a place in St. Louis, but it was very difficult trying to find a building or neighborhood to start,” the owner-chef recalls. His wife, Deidra, a Hannibal native, was familiar with the area and the striking structure, which was most recently the former Old Stone House Inn prior to Cole’s Hearth Room. “We came up here to see it and I thought, ‘Oh, this is perfect.’ ”

Formerly a farmhouse, Civil War-era hospital and cemetery caretaker’s residence, the building was purchased by the husband-and-wife duo in February 2020. After some much-needed renovations including the addition of a commercial kitchen and bar, Cole’s Hearth Room opened that July and immediately began drawing hungry diners from Palmyra and the nearby population hubs of Hannibal and Quincy, Illinois.

The name of the restaurant, Coltin says, was inevitable. The single dining room is bookended by the building’s pair of original stone fireplaces, and along with the bar area seats up to 68 diners. A wraparound porch seats an additional 50 customers, rivaling the main seating area for popularity especially on temperate evenings.

Matching the atmosphere of the locale is an attention to detail on the part of Coltin and his kitchen crew that’s apparent in every bite.

“I try to take your classic American things people maybe would have eaten when they were young and try to elevate them to where the flavors are familiar, but the presentation is maybe a little bit more unique,” Coltin says.

Coltin and his team do as much as they can in-house or by hand, including creating all of the sauces and dressings used as ingredients. This includes a three-day process for making the creme fraiche used in the ranch dip that accompanies the Truffle Fries appetizer, or handcutting all of the steaks that form the restaurant’s beef entree selections. This focus on process and ingredients creates a menu trim with options but bursting with unique flavors.

What might seem like a time-consuming method of doing things the hard way is how Coltin prefers to cook, giving him greater control over the end results. Take the Toasted Ravioli from the appetizer menu — a St. Louis standard paying homage to Coltin’s culinary proving grounds. Every part of creating the dish, from the filling to the breading, is handmade.

“I get more pleasure out of having my hands in as much of everything on the menu as I possibly can,” Coltin says. “When I’m buying a product in that is completely prepared and all I do is put it on a plate and give it to you, there’s no satisfaction for me.”

Northeast Missouri might not be where you’d expect to find world-class takes on seafood, but the chef says they are some of the most popular choices  on the entire menu. The top spot on his appetizer menu has earned praise from visiting East Coast diners: Crab Cakes served with dill high bearnaise sauce and red pepper remoulade. Seafood also is the owner-chef’s favorite type of food to try out in the kitchen. While the restaurant offers different seafood specials depending on the catch, the week and the season, several customer favorites from the sea are offered year-round.

For Cole’s Salmon, an 8-ounce fillet of cold-water salmon is seasoned with salt and pepper and chargrilled. The fish is finished with a garlic bourbon glaze and topped with a flash-fried mustard green tossed with lemon juice and Parmesan cheese. All entrees are plated and paired with a vegetable — in this case, grilled asparagus and a sweet potato puree. The dish is then given the finishing, showstopping touch: When served tableside, the dish is covered and smoked with a citrus fog.

“You get the sweetness from the salmon with the glaze, and that green on top gives it that nice little spice and saltiness that goes with the sweetness of the salmon,” Coltin says. “Then the citrus fog is like your lemon juice over your seafood.”

Gulf shrimp are the centerpiece of the Bistro Shrimp. Five jumbo shrimp are first marinated in lemon garlic olive oil, then pan seared in butter, salt, pepper and red pepper flakes. The shrimp simmer in ground garlic, a spicy marinara sauce and white wine. Coltin finishes the dish with balsamic marinated tomatoes, which is made in house and similar in taste to a thick bruschetta.

“That balances the sweetness and the acid of the red sauce with the nice cool sweetness of the tomatoes on top,” Coltin adds. 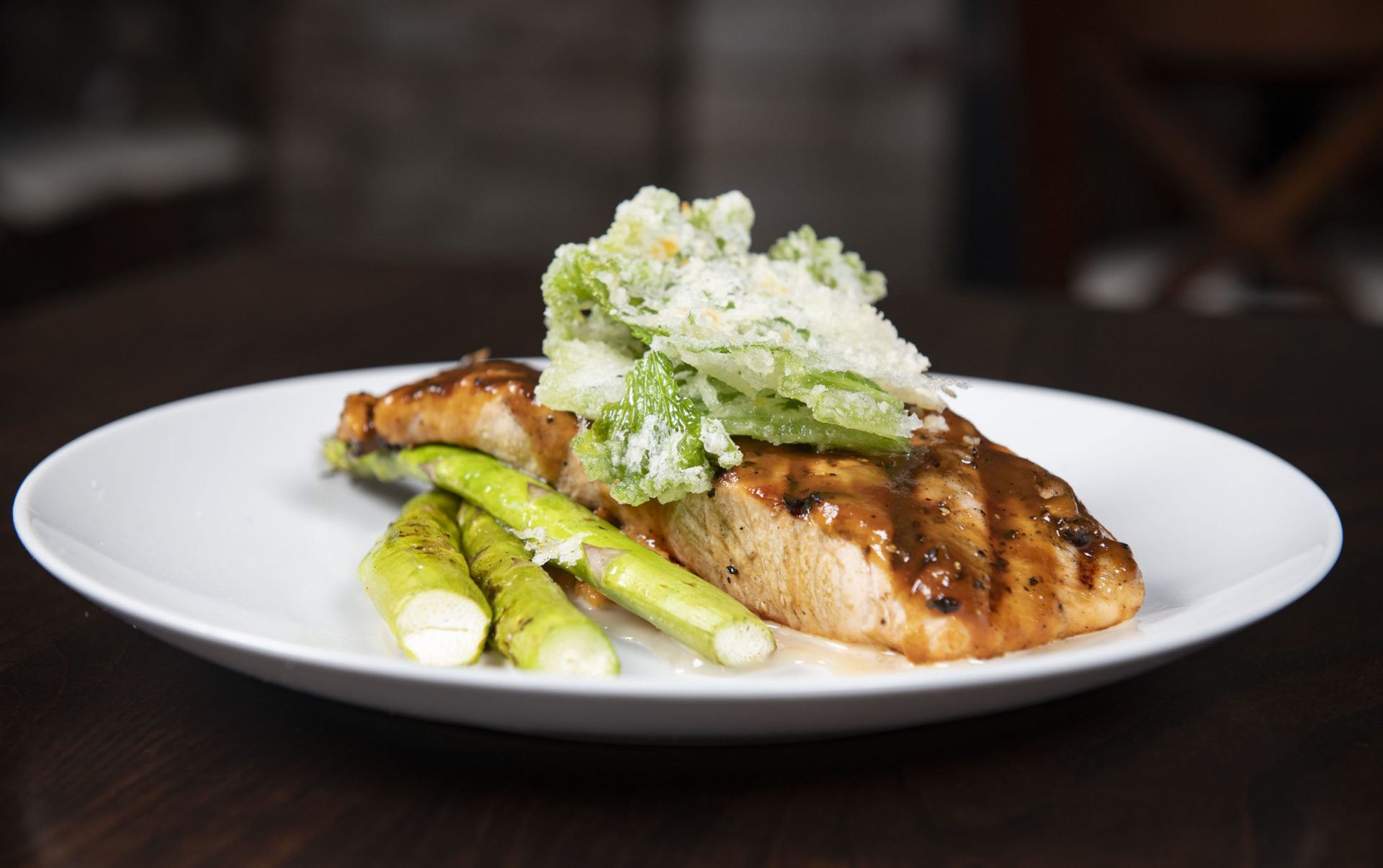 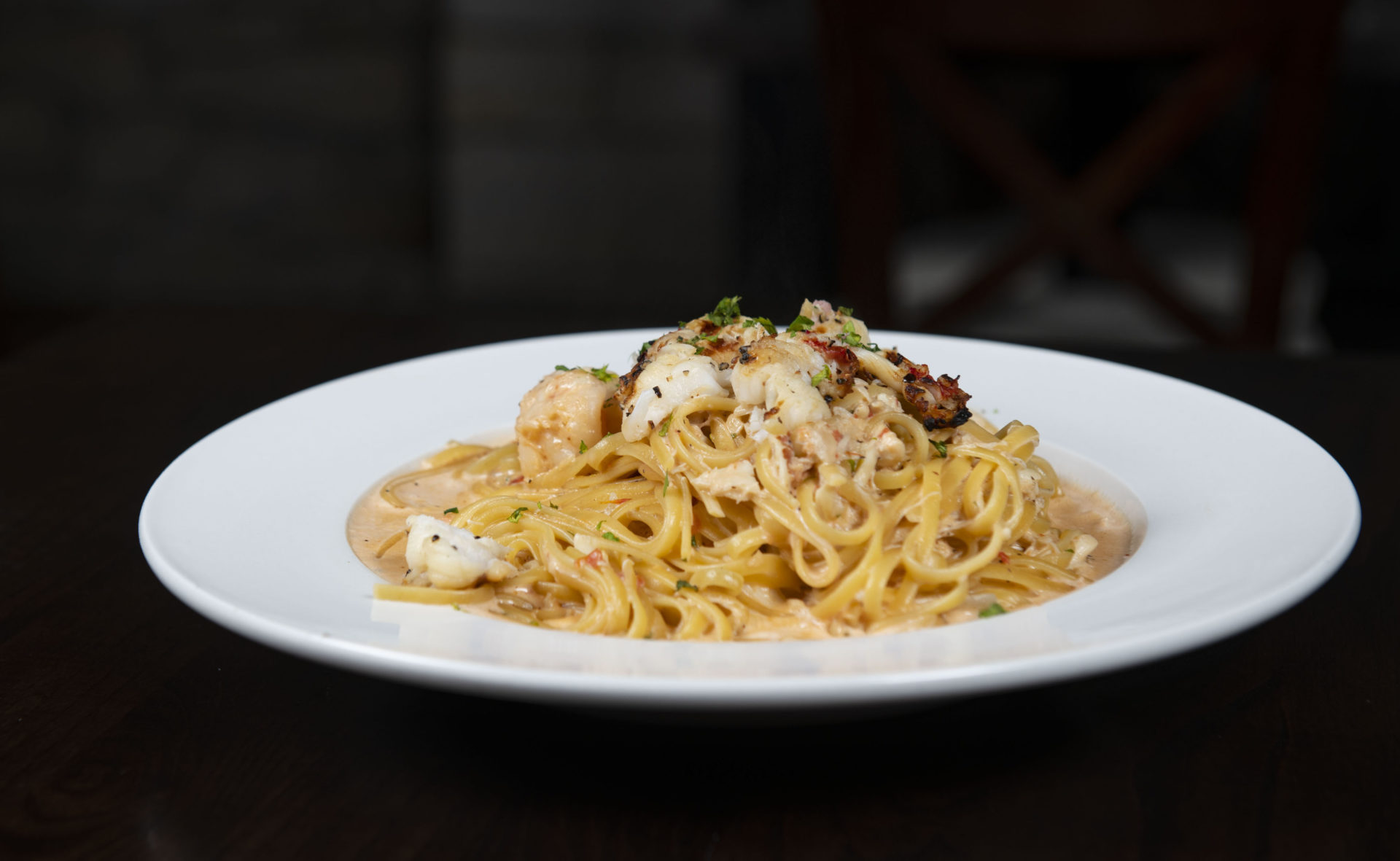 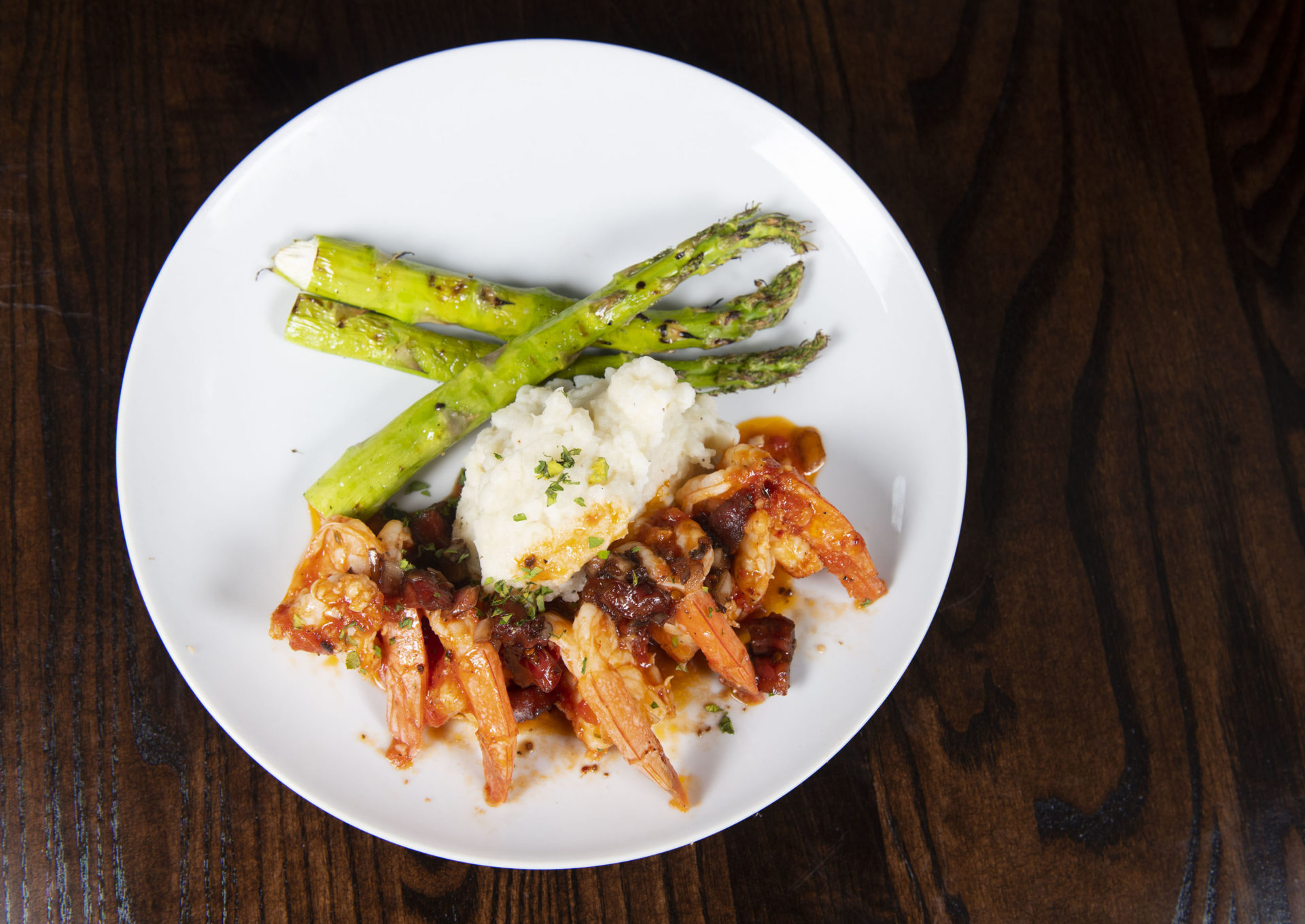 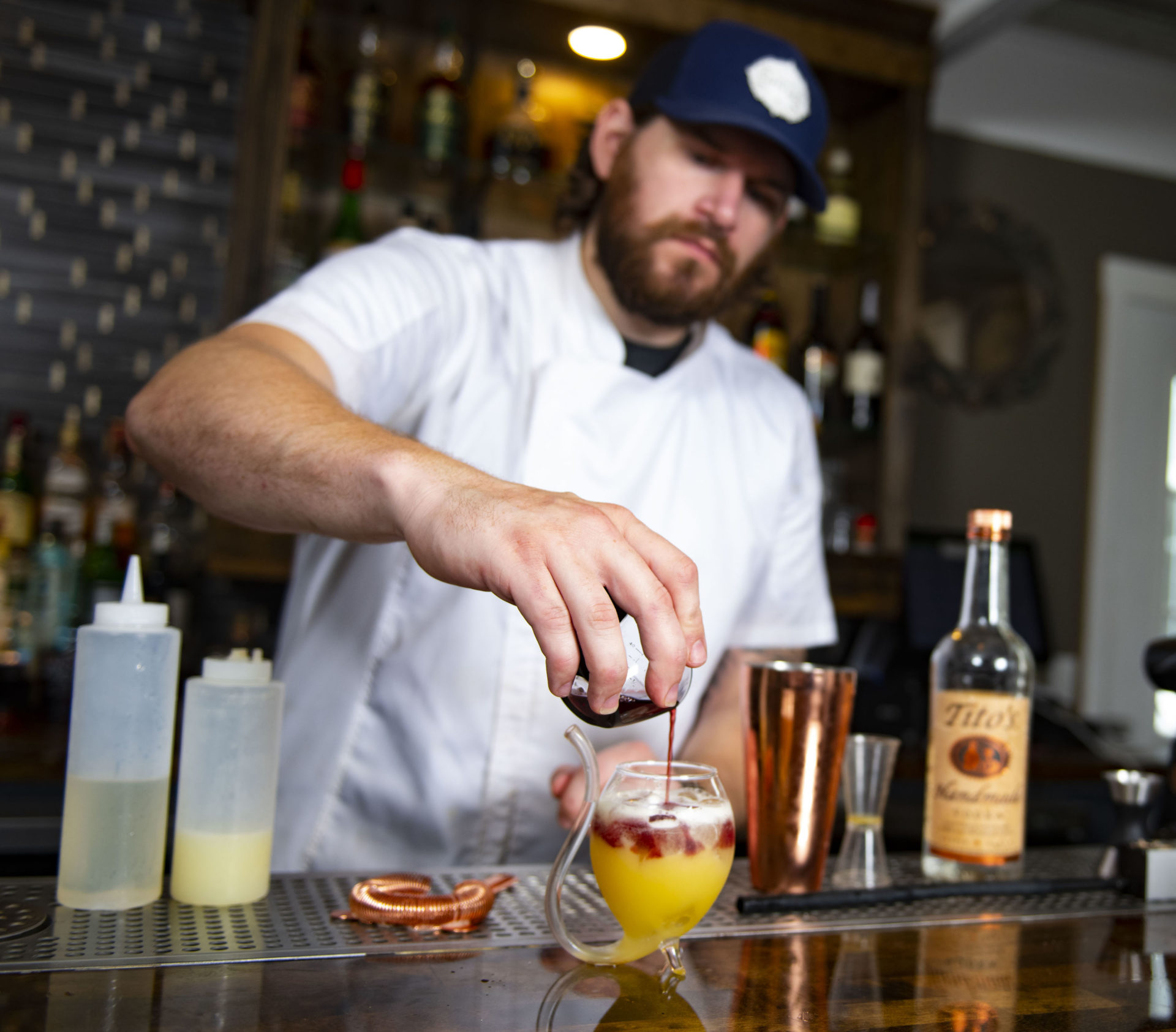 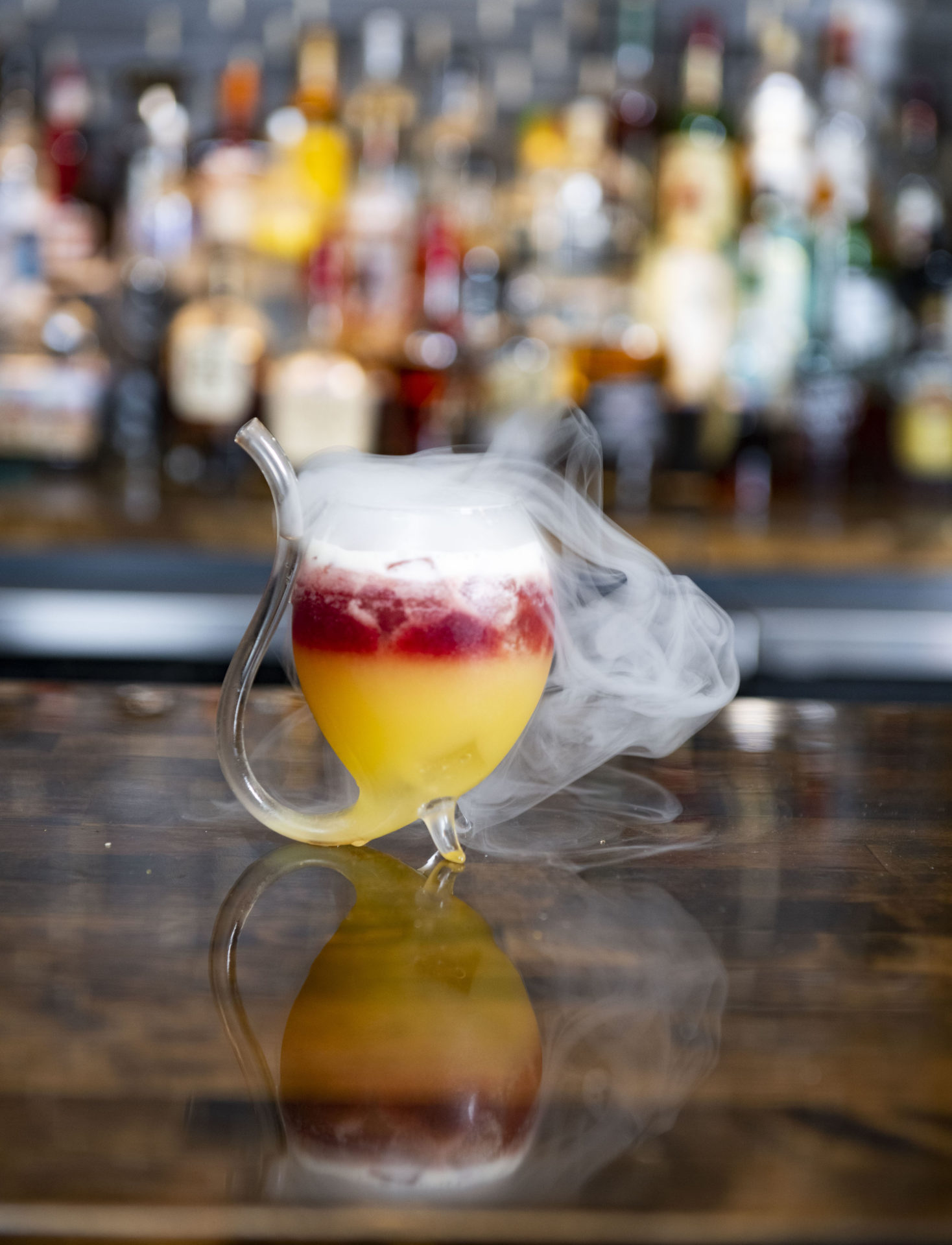 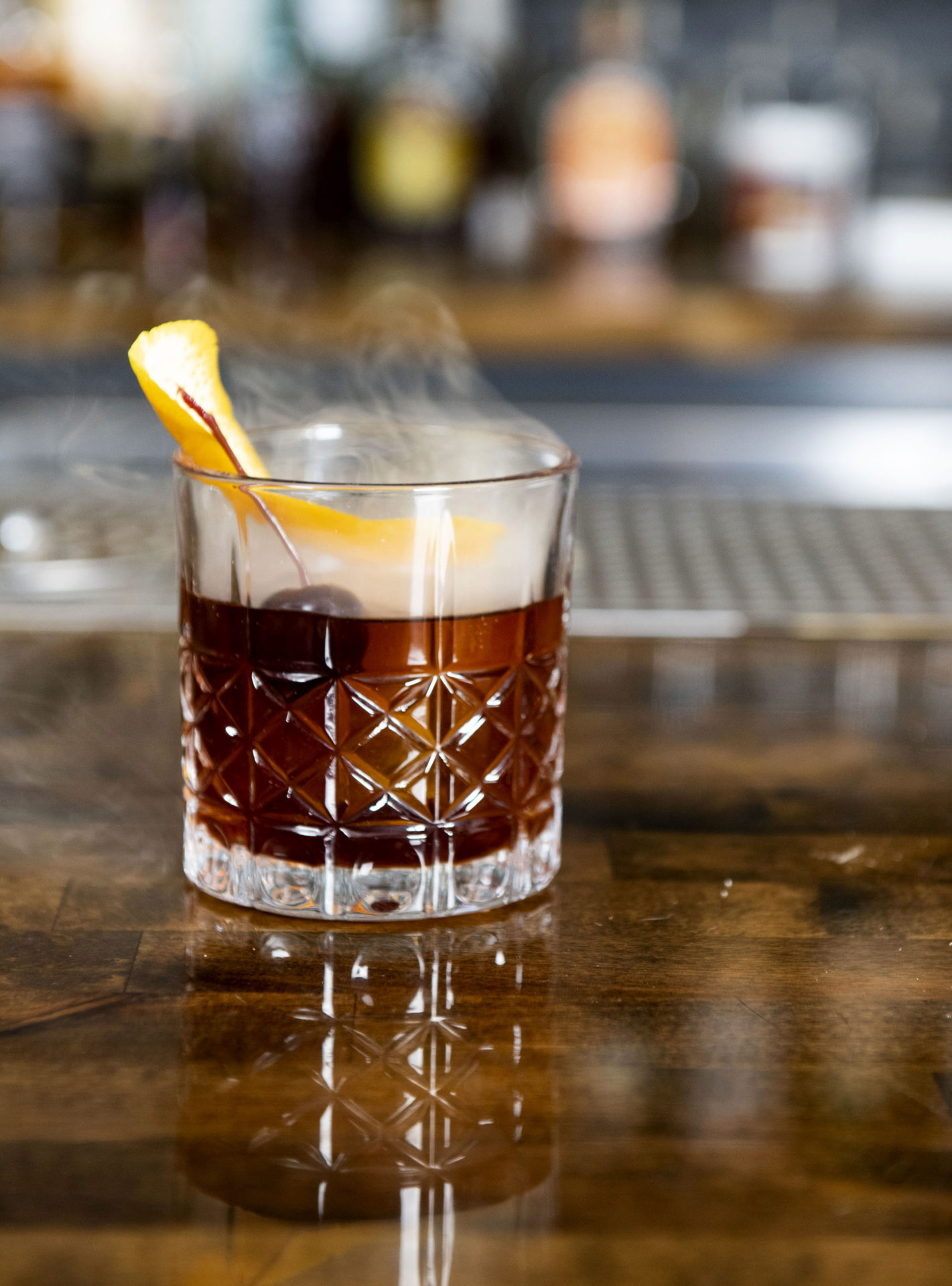 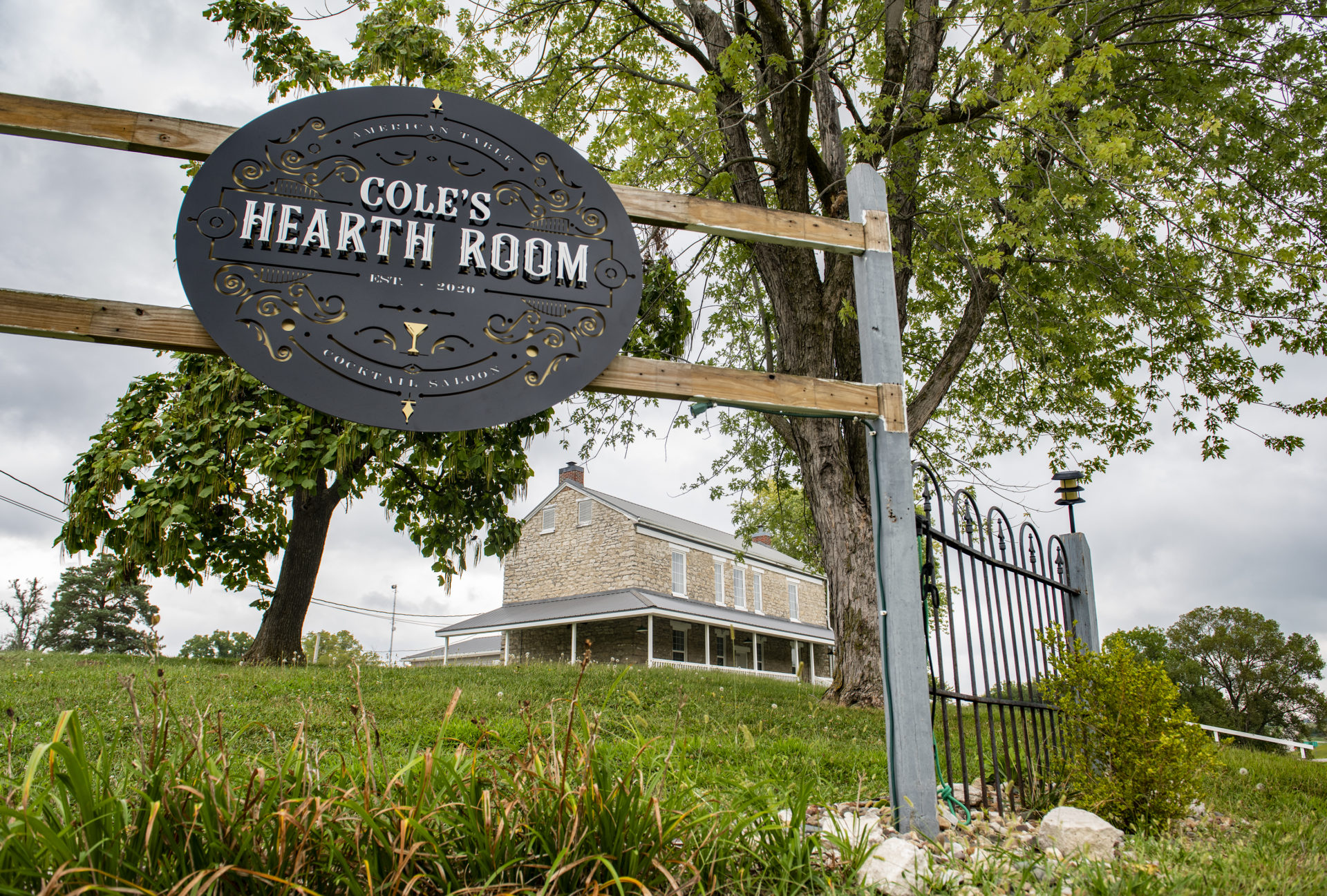 Pasta lovers will find a trio of offerings from which to choose, the king of which is Seafood Linguine. Coltin pulls out all the stops for this selection, sauteing white onion before adding shrimp, garlic, parsley, sherry, cream, marinara sauce and jumbo lump crab meat. Next comes the linguine, a light seasoning of salt, pepper and butter and a finishing touch of Parmesan. The heaping helping of pasta, shrimp and crab finally is topped with a 6-ounce grilled lobster tail.

Seafood may be Coltin’s favorite food group to cook with, but his own personal favorite item on the menu is the Chicken Kindaccata. The dish gets its unique name from Coltin’s description that it “kinda” resembles Chicken Piccata. His take on the dish begins with a pan-seared 10-ounce chicken breast topped with a garlic and caper white wine sauce and is finally finished with a bourbon mushroom compote.

If you prefer a libation before dinner, Coltin puts his prior bartending and mixing experience to good use crafting some truly unique cocktails at the restaurant bar. Bourbon enthusiasts will enjoy his Smoked Maple Man-Fashioned — a cherry wood-smoked and maple imbued combination of a Manhattan and Old Fashioned.

For something even more adventurous and eye-catching, try The Sherlock. Tito’s vodka and fresh citrus juices are mixed and strained over ice into a pipe-shaped glass. To this is added red Burgundy, which floats in a layer over the vodka, and finally a rosemary smoke bubble as the pipe topper.

“It’s almost like when you’re a kid with the bubble pipe and it blows out,” Coltin says with a laugh. “It’s like that, but the adult version.”

With a tried-and-true dinner menu, dessert is the one thing that will surprise even regulars to Cole’s Hearth Room. Cheesecakes, turnovers with seasonal fruit or cakes with liqueur buttercreams and different coulis could be the chef’s choice of the week, and all are homemade. From the first sip of your cocktail to the last bite from the cake fork, an evening at Cole’s Hearth Room is designed to highlight the dinner experience in an intimate setting.

“There’s nothing on my walls that is going to distract you from the person you’re spending time with,” Coltin says. “If you’re going on a date night and you’re an hour away, I can promise you a unique experience.”