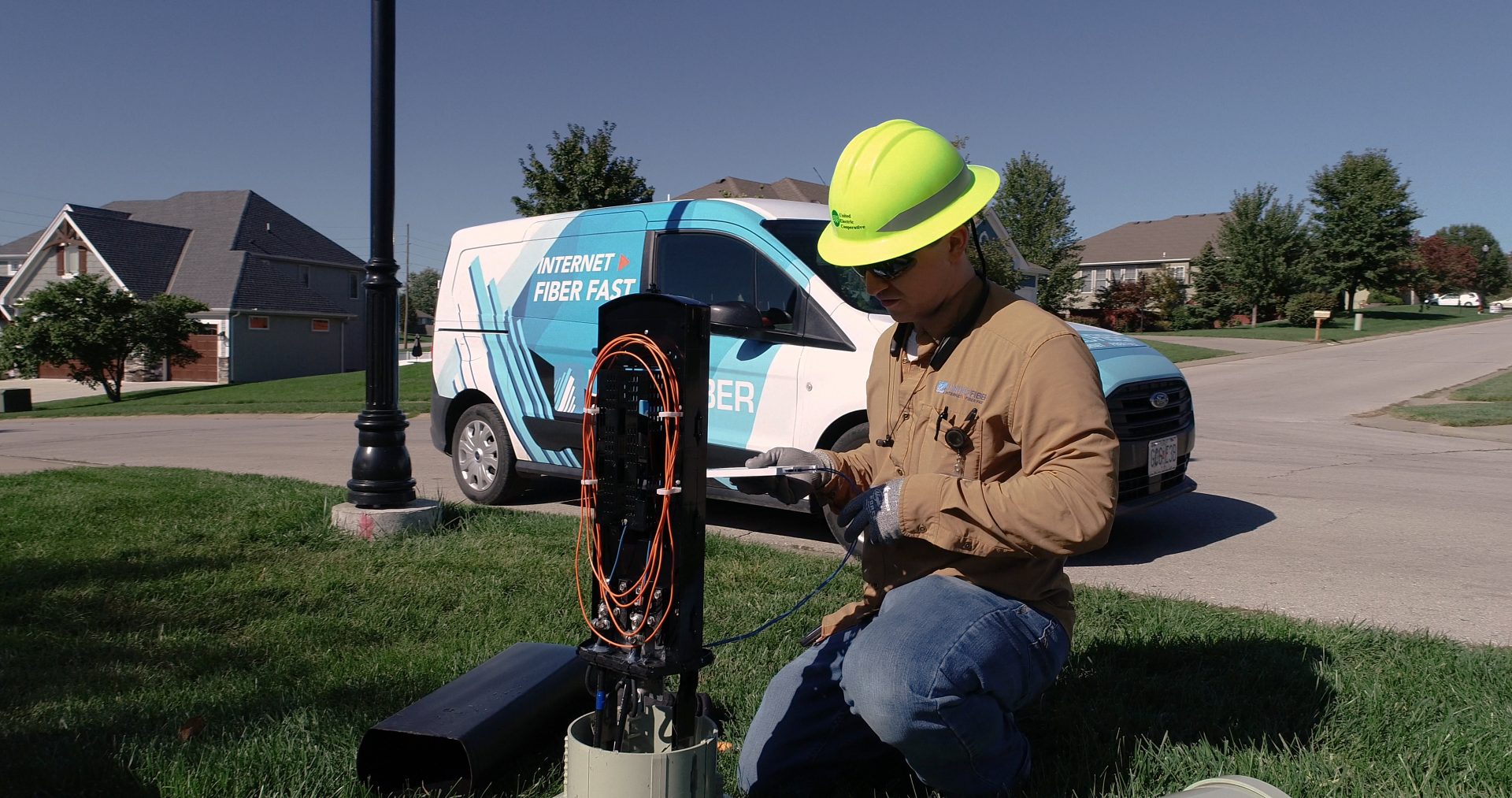 When spring 2020 arrived in Rosendale, an average school day at the North Andrew R-4 School District looked quite different than it had a few weeks before. Students studied at home with Chromebooks. Teachers took lesson plans online. And an electric co-op’s fiber company worked tirelessly to connect them all so valuable time wasn’t lost to the COVID-19 pandemic. Faculty, staff and the student body adjusted to a new normal, and high-speed fiber saved the semester.

“It was an opportunity to keep education going forward,” recalls Superintendent Mark McDaniel. “We had some kids who didn’t have the ability to get online at home, and United was quite willing to troubleshoot those spots to expand coverage and create hot spots. They continue to try and find ways to reach people who don’t have it.”

The success for schools such as North Andrew around United Electric’s service territory — and 30 communities who don’t receive electricity from the co-op — wouldn’t have been possible without broadband internet access from United Fiber. United Electric CEO and General Manager Jim Bagley says it’s a success story that almost wasn’t. In the early 2010s, the co-op — with an already low density at 2.5 meters per mile of line and losing members who were moving away from northwest Missouri — was facing an economic challenge to maintain the reliability of its electric grid.

“The money wasn’t there for what we needed to do and the demographics we serve,” Jim says. “I don’t think United would exist in its present form if we hadn’t gotten fiber. It’s been a lifesaver.”

The outlook is much different in 2022. Today, the co-op serves more than 23,000 fiber customers, and added subscribers at an average of nearly 640 per month in 2021. Happily, as broadband availability attracts people to the region, United Electric is gaining member-owners for the first time in years.

United staff attribute the success to the foresight and a leap of faith taken by the co-op’s board of directors who were already accustomed to serving sectors outside the electric footprint. When United Services was formed as a wholly owned subsidiary in 1994, it found success with DirecTV. In the new millennium, United Services began offering satellite broadband and later wireless broadband services. When a 2010 survey found 89% of members in the King City area did not have access to minimal service — then considered 5 Mbps download by 1 Mbps upload speeds — the board knew something had to be done. The co-op began preparing infrastructure after being awarded $21 million through the American Recovery and Reinvestment Act. The first customers came online in 2013, and as United Fiber connected homes and businesses along the way, the growth was exponential.

“You try to emulate the co-op values, because even though it’s a for-profit, competitive business, it all comes back to United Electric,” says Darren Farnan, chief operating officer of United Services. “We treat the customers on the fiber side the same way we treat members on the electric side. Having that local tie and high-quality service is why we’ve been successful.”

As a result of that success, profits of the subsidiary have been returned to and benefited the members of United Electric — whether or not they’re fiber subscribers. In less than a decade, the electric co-op that was once on uneven financial footing has reinvested in upgrading equipment. Jim estimates fiber profits have amounted to an average of $1,300 returned to each United Electric member over the past five years, either in the form of patronage capital or rate rebates.

“It’s enabled us to do so many things as a co-op. It allowed us to do bill rebates for members during those months when a lot of businesses were shut down. The last half of last year we cut the price of power by 10%,” Jim says. “They are two businesses that intertwine very well with each other, and it all fits our mission.”

As the network expands, United Fiber has helped some members of Platte-Clay Electric Cooperative who are now benefiting from having a cooperative option for reliable, high-speed internet.

“We’re happy to have United Fiber providing broadband services to portions of our service territory,” says Platte-Clay CEO and General Manager David Deihl. “This relationship allows some of our members to be served with a new internet option without all of Platte-Clay’s membership taking on the financial and regulatory risks associated with launching a new business model.”

“We pay them for pole attachments the same as any utility,” Jim says of the relationship between the two co-ops. “They’ve been very welcoming and good to work with because they want to see that their members are served.”

Darren says initially the growth of web-based video and streaming platforms spurred customer demand. When schools, businesses and life as usual shut down during the throes of the pandemic, the real needs for broadband were laid bare: commerce, telehealth and education. Fast, reliable internet was no longer just for leisure, but considered a necessity. Or as Jim puts it, “a tool, just like electricity or water.”

Educators like Mark are hopeful the worst of the pandemic is in the rearview mirror, but the innovations it caused are sticking around. Students once stuck in quarantine for two-week stretches can attend class virtually, teachers can send homework and, ideally, better internet coverage will contribute to better-quality class work. For some counties which lack a hospital or medical clinic, online doctor visits continue to make the difference in keeping populations healthy. Broadband is now on the checklist for prospective homeowners alongside quality school districts and property tax assessments. United Fiber specifically was the reason PC Magazine highlighted the town of Gower in its 2020 list of the 10 cheapest U.S. cities with gigabit internet.

“It’s the equalizer,” Darren says. “If you talk to Realtors, it’s a real thing. Entrepreneurship, education, healthcare — there’s no barrier anymore to living where you want to live, and it’s a way for our rural areas to compete moving forward.”

The improvements to quality of life have had an added effect: In no uncertain terms, broadband is not just saving rural America but allowing it to thrive.

“To keep rural areas moving forward we have to keep this an attractive place to work and live, and broadband is imperative to that,” Jim says. “Everything from our representation in government to having a workforce and employers — the economic stability of the region is tied to broadband.”