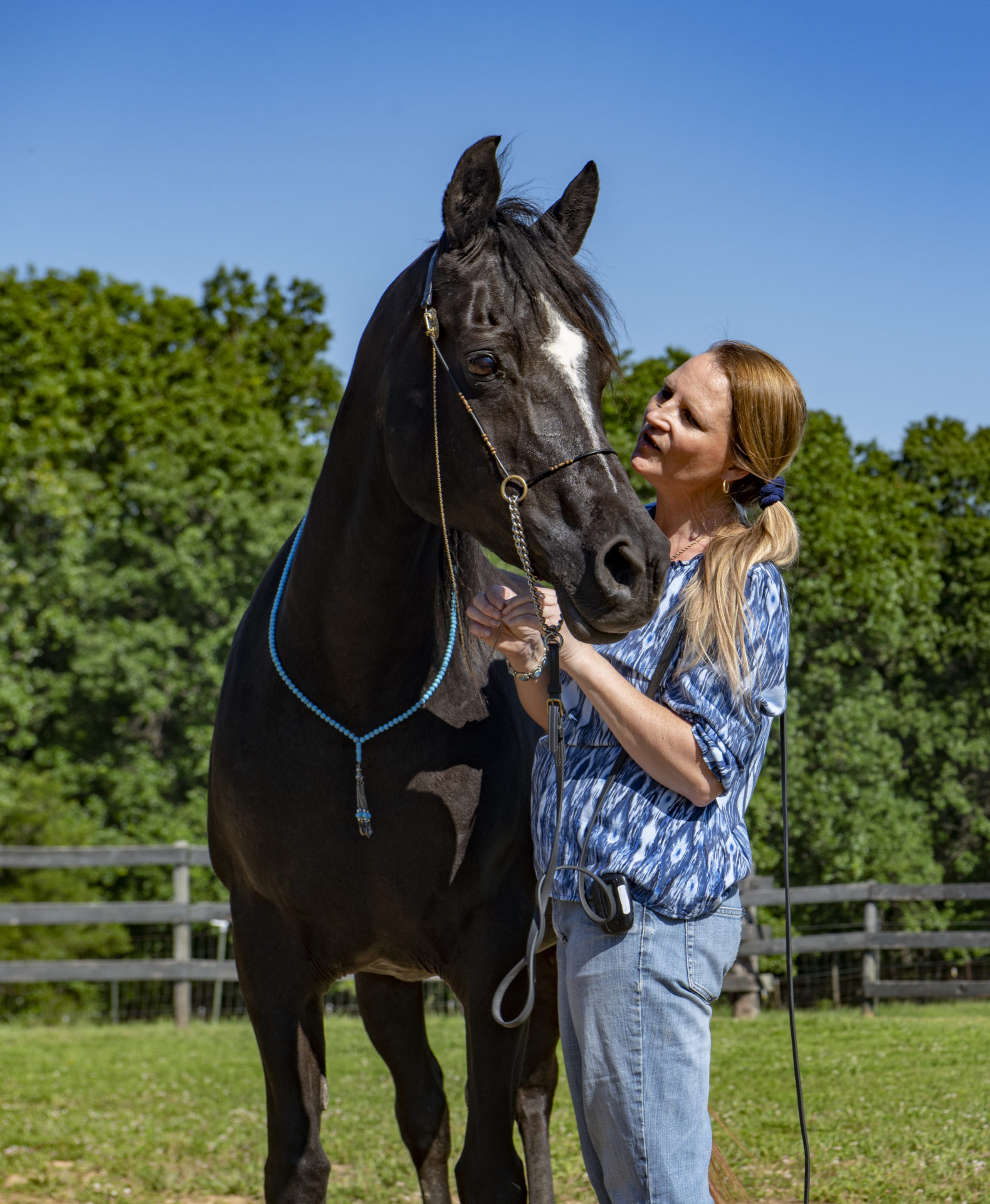 Many little girls have a horse dream. Sometimes, the dream never fades and grows stronger with time, accompanying her into adulthood. This was the case for Letta Smith, owner of Cressant Hill Arabians in Truxton, a ranch where 30 years ago she realized her childhood dream by raising Arabian horses. As a little girl, she started with a Shetland pony and graduated to larger horses, never losing her equine passion as she matured into adulthood.

“I fell in love with Arabian horses in high school,” Letta says. “I was looking up magazines to read about horses, and I came across a picture of a grey Arabian. Its name was Farazdac. I still have the sheet from the magazine.”

Upon discovering Farazdac was a Straight Egyptian Arabian, Letta learned about every facet of the animal, including its history. Letta found that in the ancient Middle East the number of horses a person owned primarily determined wealth. Wealth was increased if the horses were Straight Egyptian Arabians, a line that ancient Bedouins went to extreme lengths to keep pure. Breeding, foaling, and training were ritualized and closely observed processes aimed at keeping the original line as “noble” as possible. However, over time, these lines inevitably broke off into Polish, Russian and other lines that dwindled the breed’s population to less than 6,000 horses in modern times. This information inspired Letta to start a ranch for preserving and improving Straight Egyptian Arabian lines for future generations.

After graduating from high school and later marrying her husband, Jerry, Letta plunged into her lifelong dream of starting a ranch. With a business plan ready, she purchased her dream’s foundation, a bay mare named Eskada Yasmine. When Letta met Eskada Yasmine, she says, “I knew from the moment I first saw her that I had to make her mine.”

“The Arabian breed is very versatile,” Letta says. “From western to English, from racing to endurance riding, from dressage to hunter, jumper or even halter and beloved family companion, they are a breed of horse that truly can do all disciplines of riding.”

In addition to being hardy at most equine sports and purposes, Arabian horses also are exceptionally docile and intelligent. Though this breed is generally thought of as spirited and unpredictably energetic, Letta says this is a common misconception.

“Whenever it comes to a horse being spirited or hot, that comes from the personality that is within. Just like people are different, all horses are different,” she says. “We talk to our horses, and when you talk to them, it eases and calms them. You just have to help them understand and that comes with training. They’re very quick learners.” 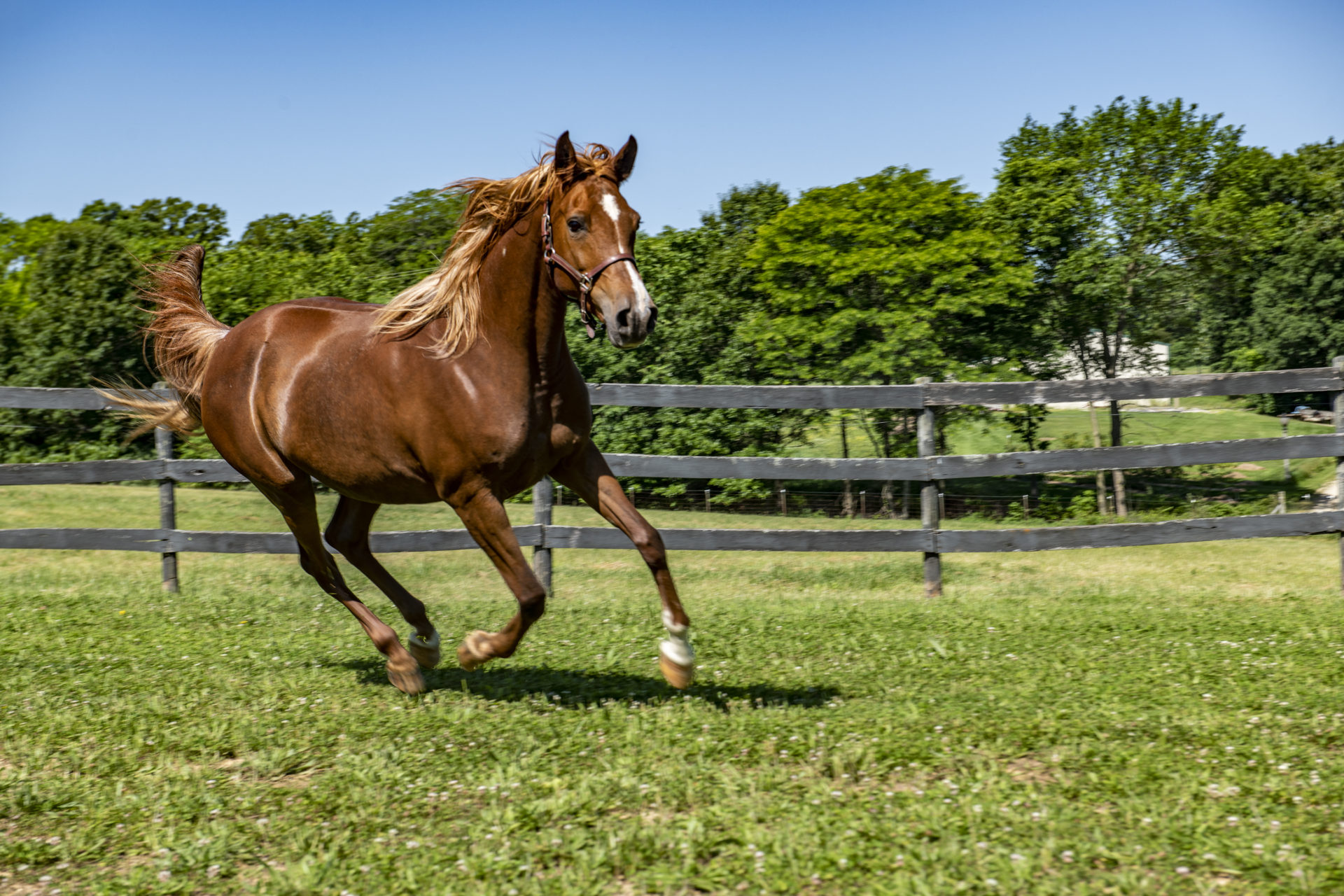 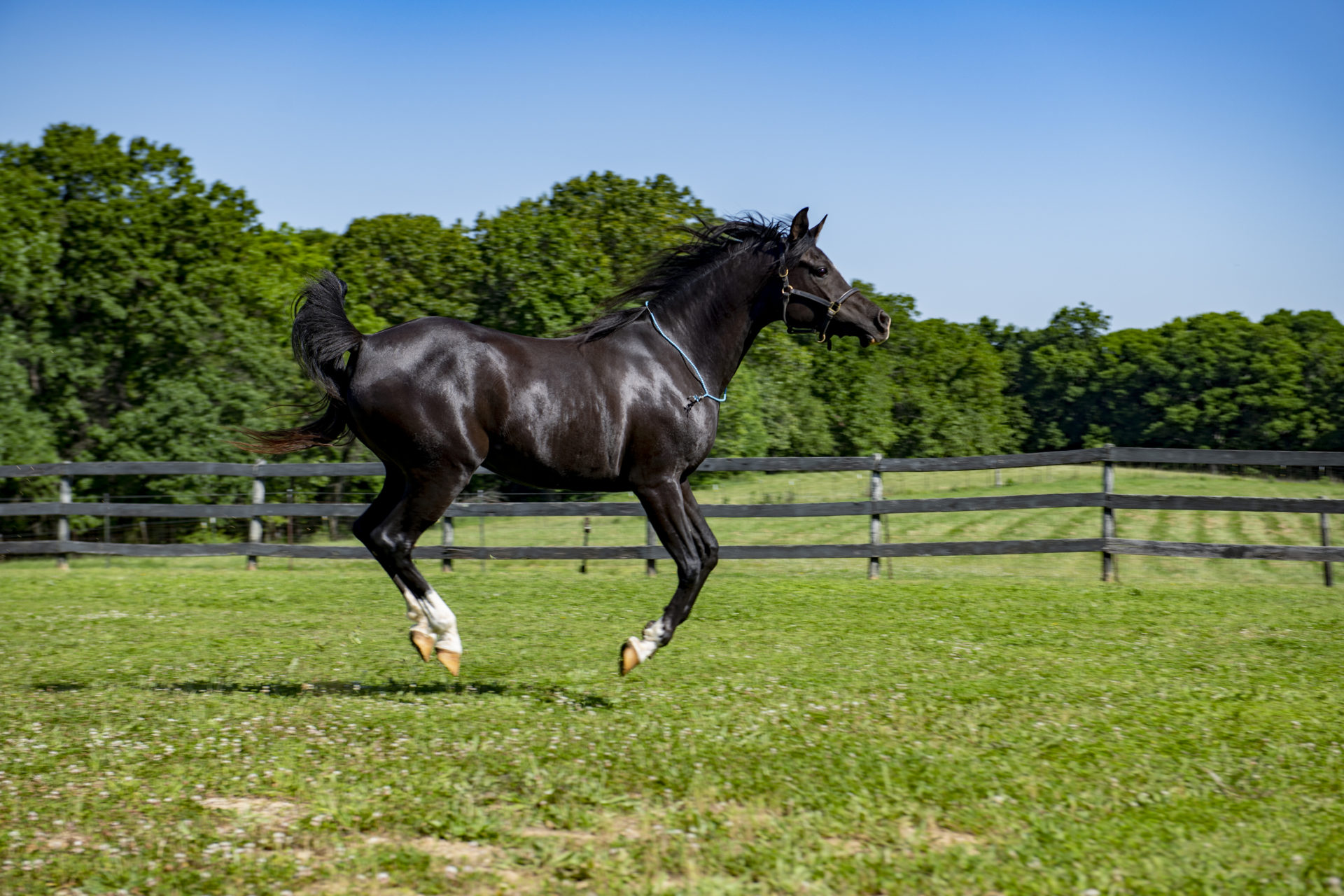 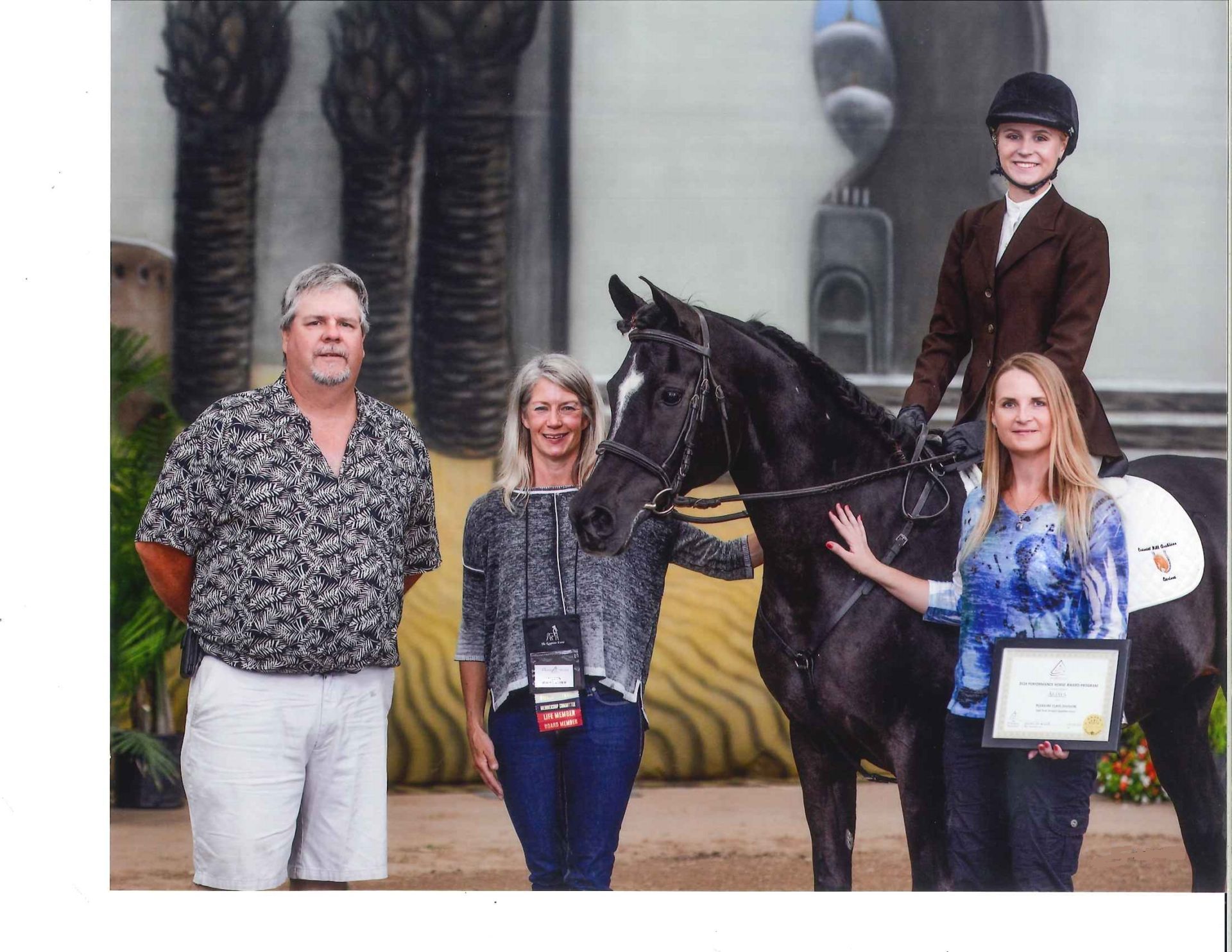 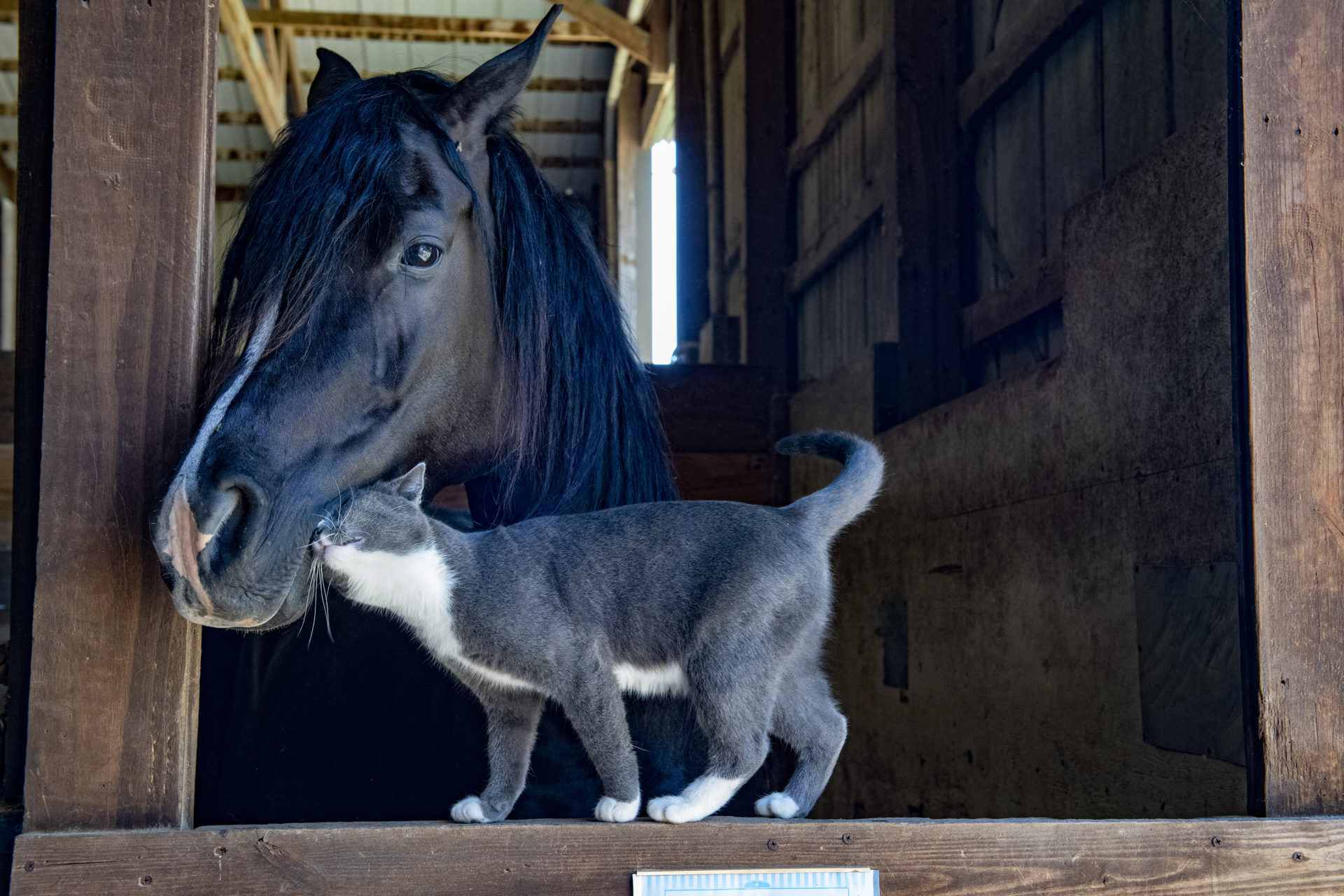 Buying one of Letta’s horses is a careful and long process. With her most inexpensive horses starting at $5,000, Letta’s customers must be certain they have the passion and responsibility it takes to own a Straight Egyptian Arabian. Letta patiently works to pair her customers with the right horse. To achieve this, she tests the customer’s experience and ability to interact with the horse they want to buy. For the customer, this occasionally turns into several weekends of visiting and working with the horse. This ensures the customer has the right level of equine expertise and is properly paired with their horse’s temperament. For these reasons, Letta has years when she sells as few as eight horses or as many as 30.

In addition to customer pairing, Letta thoroughly trains and socializes her horses before sending them to their new homes. At birth, the foals are imprinted by their trainer. This means that a person is present and interactive with the mare during the birthing process, touching and supporting the foal as it is born. Since one of the first scents that greets the foal is a human’s, the foal will be used to human handlers from a young age. From her experience, Letta believes early socializing makes the foal more confident when it is time to train them.

“I’m cleaning out the nostrils, rubbing their ears, and touching the foal all over its body,” Letta says. “All the while the mare does a soft nicker to the foal.”

Besides imprinting, training horses also means making sure horses are able to load and unload from trailers, be washed and wear a halter among other qualities that make the horse easier to handle. The end accomplishment is that Letta is able to sell a well-tempered horse with foundational training.

Letta not only emphasizes the Straight Egyptian Arabian as the a beautiful horse breed, but also as a way for parents to teach their children responsibility.

“Horses are a great way to do that,” Letta explains. “The horse community is a great community. They have good morals and really high standards, so it teaches the kids to have good manners and be responsible. I think it’s really important for kids to have that learning and understanding.”

Missouri’s demand for horses tends to be fulfilled by heavy workhorses. However, after years of educating people on the Straight Egyptian Arabian’s beauty and versatility, Letta has encouraged the Arabian’s popularity as a light and flexible work horse. Concerning the future of the breed she has worked so hard to preserve and improve, Letta has one great dream.

“I would really like for people to give the breed a chance,” she says. “There’s a lot of stereotypes out there on Straight Egyptian Arabians. Don’t believe everything you hear. Go check it out hands-on for yourself.”

For information, visit www.cressanthill.com or call 636-597-4023. Office hours are Monday through Friday 10 a.m. to 4 p.m. Visits and tours are welcome by appointment.