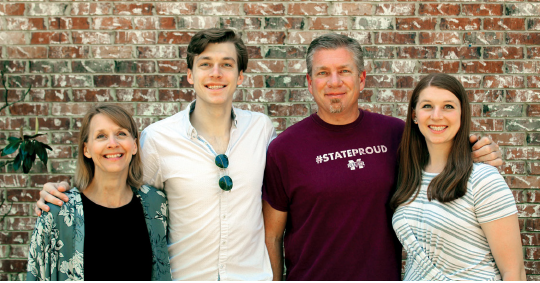 Kyle Kruse will never forget the day he stepped on the Braniff ﬂight in 1987. At 17 years old, it was his ﬁrst ﬂight and he was headed to Washington, D.C. “I was just a country boy from Russellville,” says Kyle. “It was a trip that would hold many ﬁrsts for me.”

Sadly, this year’s Youth Tour trip was hosted as a virtual event due to health concerns surrounding COVID-19.

The journey offers students a chance to learn more about the political process and engage their elected ofﬁcials while learning more about our nation’s history along with hundreds of Youth Tour delegates from other states.

During Kyle’s junior year of high school, it was his English teacher, Mrs. Engelbrecht, who assigned the Youth Tour essay to her class. The students were to write about how electric cooperatives made life better for their communities. They also were given history about electric cooperatives to prepare for the writing project.

Once the essays were graded, it was up to the students to decide whether or not they wanted to enter their work into the essay contest. If the cooperative ended up choosing their essay, it meant an all-expenses-paid weeklong trip to the nation’s capital for the winner.

“To me, it seemed like an easy assignment with a possible big win at the end of the tunnel,” says Kyle, 50.

He submitted his essay to Three Rivers Electric Cooperative and was selected as one of the winners. Before Kyle knew it, he was packing for the trip to Washington, D.C. with dozens of other winners from across Missouri.

“The trip gave me the chance to meet people outside my usual circle here at home,” says Kyle, who is now the superintendent of the St. Clair R-XIII School District. “It broadened my horizon and helped me realize that I could accomplish anything I set my mind to. That was one of the most educational assignments I ever had in high school.”

Kyle’s favorite trip highlights were meeting Sen. Jack Danforth, an evening river cruise down the Potomac River, and of course, the Smithsonian Institution.

The next year, 1988, Kyle’s girlfriend from Russellville, Dena Parker, entered a Youth Tour essay and also won.
“Even as a 17-year-old I can remember thinking how impressed I was with the trip chaperones and how they kept everything so organized and on schedule,” recalls Dena, now a nurse practitioner at Mercy Hospital in Washington, Missouri. “I’d never ﬂ own either, and the longest I’d been away from home was a week at church camp.”

Dena says the Vietnam Memorial was a moving stop for her because an uncle had served during the conﬂict. Dena recalls locating the name on the wall of a family friend from Westphalia who hadn’t survived.
“This trip gave me a conﬁdence that I didn’t know I had,” says the 49-year-old. “By writing the essay and winning, I was pushed out of my comfort zone.”

Kyle and Dena eventually married, starting their family and careers. Before long, nearly two decades had passed and their daughter, Hannah, was a junior in high school.

“My teacher, Mrs. Schwab, gave us a mandatory assignment in English class about rural electricity in America,” she says. “I remembered Dad and Mom talking about a trip to D.C. they both went on in high school, but I didn’t know much more. I just figured it was something cool the co-ops did for kids back in the ’80s,” says Hannah, who is now a veterinary student at Mississippi State University.

“Dad was our high school superintendent at the time and when I mentioned the essay and he said, ‘You just need to write it and enter.’ So I did,” says the 22-year-old.

Hannah says her parents helped her learn how to present the essay to Three Rivers Electric’s panel of judges.
“My parents said, ‘Don’t just read it, try to connect with your audience. They want to get to know you, not just hear you read an essay,’ ” she recalls. “It was good advice.”

“One of my favorite things was seeing the monuments at night,” Hannah says. “The World War II monument was amazing at sunset.” Like her dad, she says the Potomac River cruise was another favorite. She recalls learning the two-step from the Texas delegates during the boat ride.

“I don’t know if I’d had the conﬁdence to leave home and attend college in another state if I hadn’t gone on Youth Tour,” Hannah reﬂects.

“Dad, Mom and Hannah had all entered and won. Dad and Mom both said to write this and enter,” Brady says.

The essay got Brady to the ﬁnals where his presentation helped him win a spot on the 2016 trip.

“I’d grown up where everyone knew everyone. I’d gone from kindergarten to high school with the same friends,” recalls the 20-year-old computer science major who also attends Mississippi State University. “This was the ﬁrst time I’d be with a group of people I didn’t know.”
Brady says the trip was “the best thing to ever happen to him.” A highlight for him was the stop at Arlington National Cemetery and the changing of the guard.

Like the rest of his family, Brady shares that self-conﬁdence was one of the best personal take-aways from the opportunity he was given.

“Teens, if your teacher gives you this assignment, just do it. And if the teacher doesn’t, enter through your local electric cooperative’s contest. The rewards you take away will be so much better than a grade,” touts Brady. “If you win, you’re going to have an experience that could change the trajectory of your life. But if you don’t enter, you’ll never know what might have been.”

Check out www.amec.org/content/youth-programs for more information about Missouri’s Youth Tour program and to see a video highlighting last year’s trip.