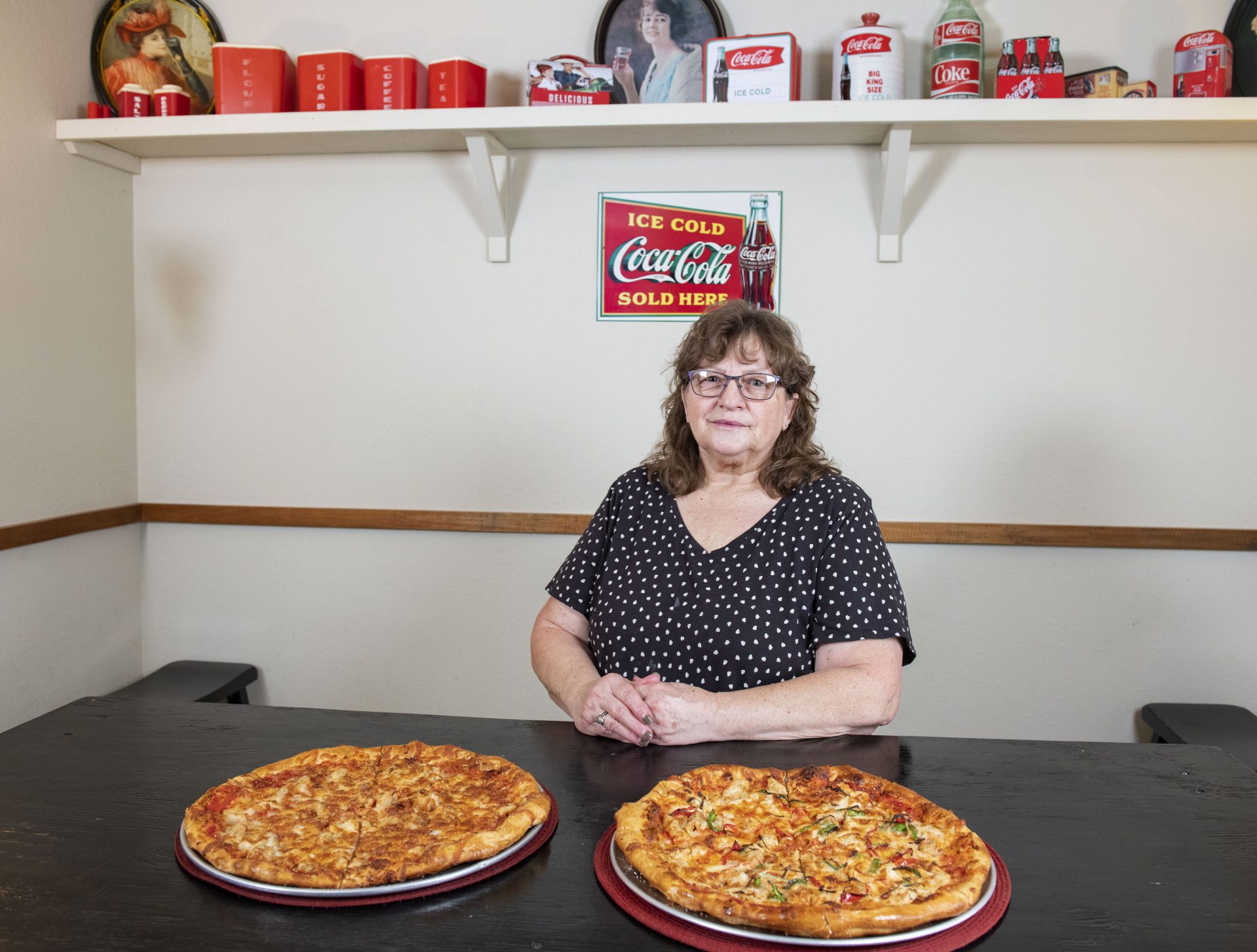 Tana Kinder knows the moment she realized her idea for a pizza restaurant would come to fruition. The hairdresser-turned-pizza maker was serving up pies from her 20-foot gooseneck trailer on the Eagleville square, just as she did every Friday evening. “I was setting up and it was raining out,” she says. “I looked out the window and there were cars already lined up all around the square. I said to myself, ‘This will work; I need a building.’ ”

For nearly two decades, Tana has served her delicious and unique takes on traditional pizza at Firehouse 54. The dinner-only restaurant is known for its specialty pizzas, calzones, ice cream and twice-per-month Taco Tuesdays.

After a 35-year career as a hairdresser, Tana was looking for a new challenge. She’s always loved to cook and thought she could provide a needed service in her hometown on Interstate 35 with a population around 300.

“I thought pizza was a need at the time,” she says of the town just south of the Missouri-Iowa border. “When I bought that trailer, the only thing we had in town was the truck stop. And what’s better than pizza and ice cream?”

Tana purchased a bright red food trailer which her friends thought looked like a firetruck, leading to the name Firehouse 54. Her first sales were at the 2005 Northwest Missouri State Fair and she hasn’t stopped since. Firehouse 54’s brick-and-mortar location was completed in 2009.

You’ll have plenty of options from which to choose at Firehouse 54, but come hungry and enjoy an order of Cheese Stix. Tana stretches the dough and tops it with a five-cheese blend before a quick trip through the oven. The crust is brushed with melted butter and dusted with garlic and seasoning. “We cut it into sticks and serve it with marinara,” Tana says. “It’s really cheesy, people are always wanting extra marinara.”

Pizza comes in different forms at Firehouse 54. A traditional is stretched to anywhere between 10 and 16 inches. If you’re just ordering for yourself, opt for a two-topping calzone. If you’re looking for a keto-friendly option, go for the Pizza Bowl. The crust is replaced by a bowl with sauce, toppings and cheese. The bowl then gets baked in the oven. “We serve it in the hot bowl,” Tana says. “No crust, no carbs. That’s been really popular.”

You can get your pie, calzone or bowl with conventional toppings such as supreme, meat lovers or create your own. What makes Firehouse 54 unique is their specialty chicken pizzas. These come with a variety of Tana’s four different sauces: marinara, Alfredo, barbecue and homemade Buffalo sauce. 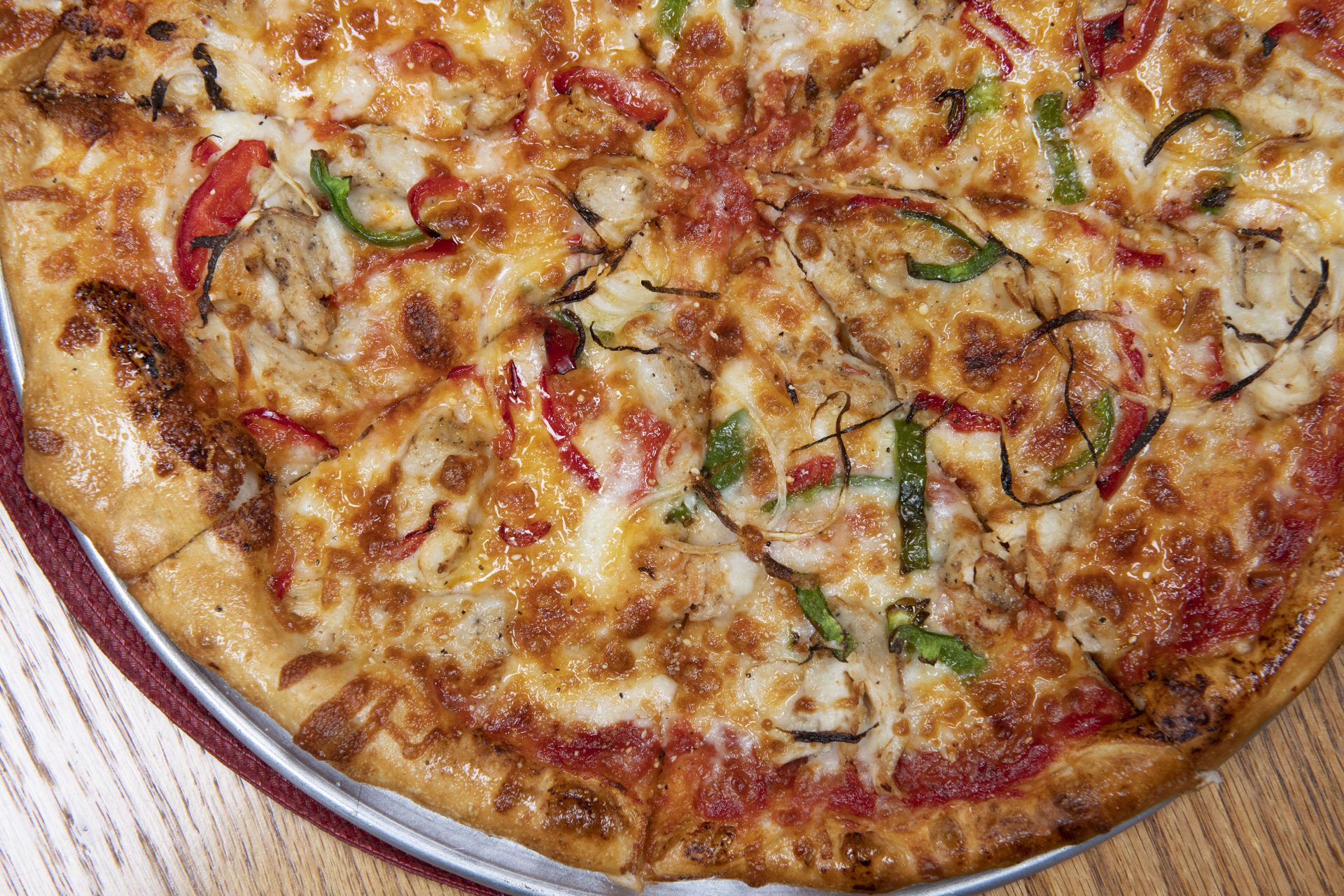 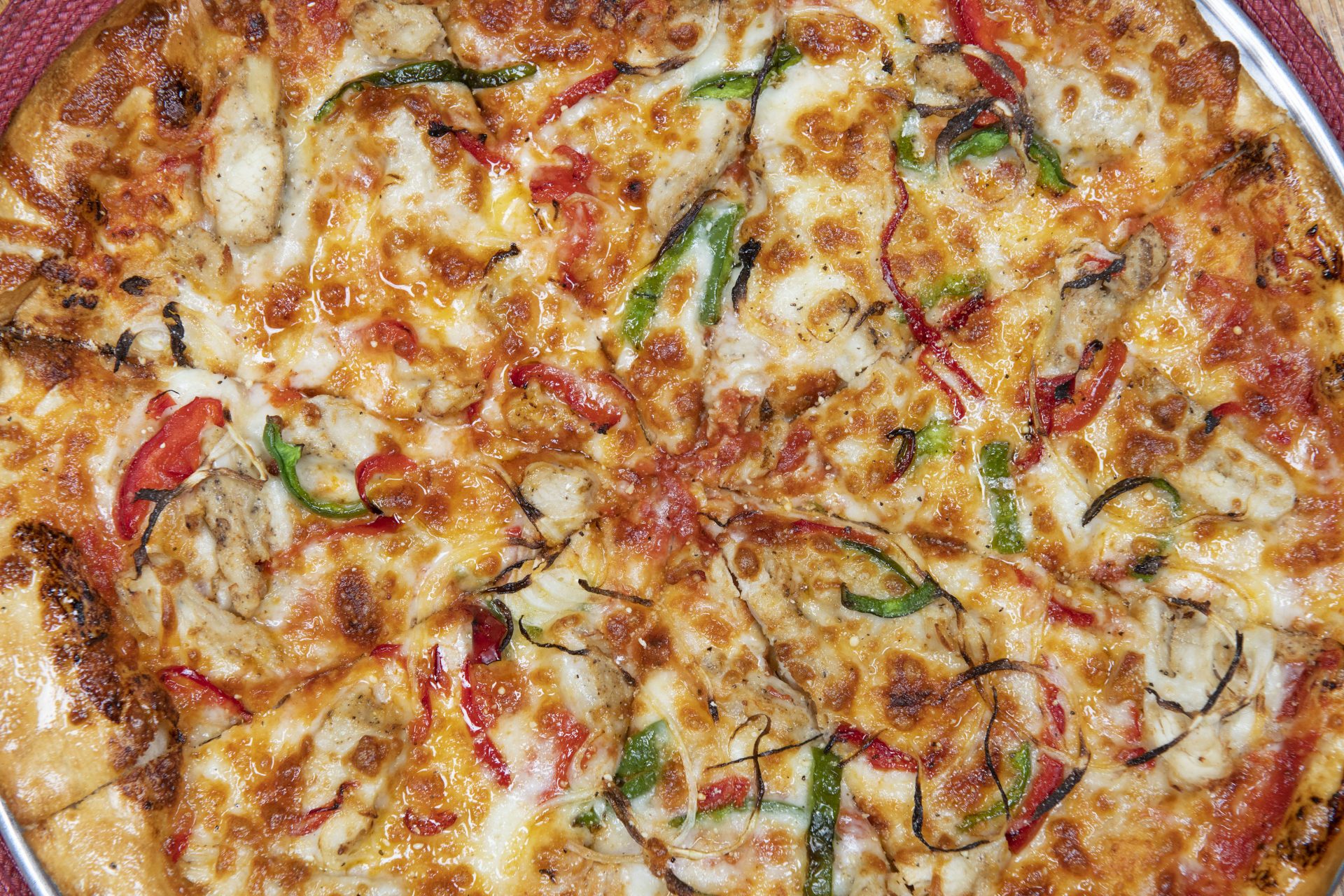 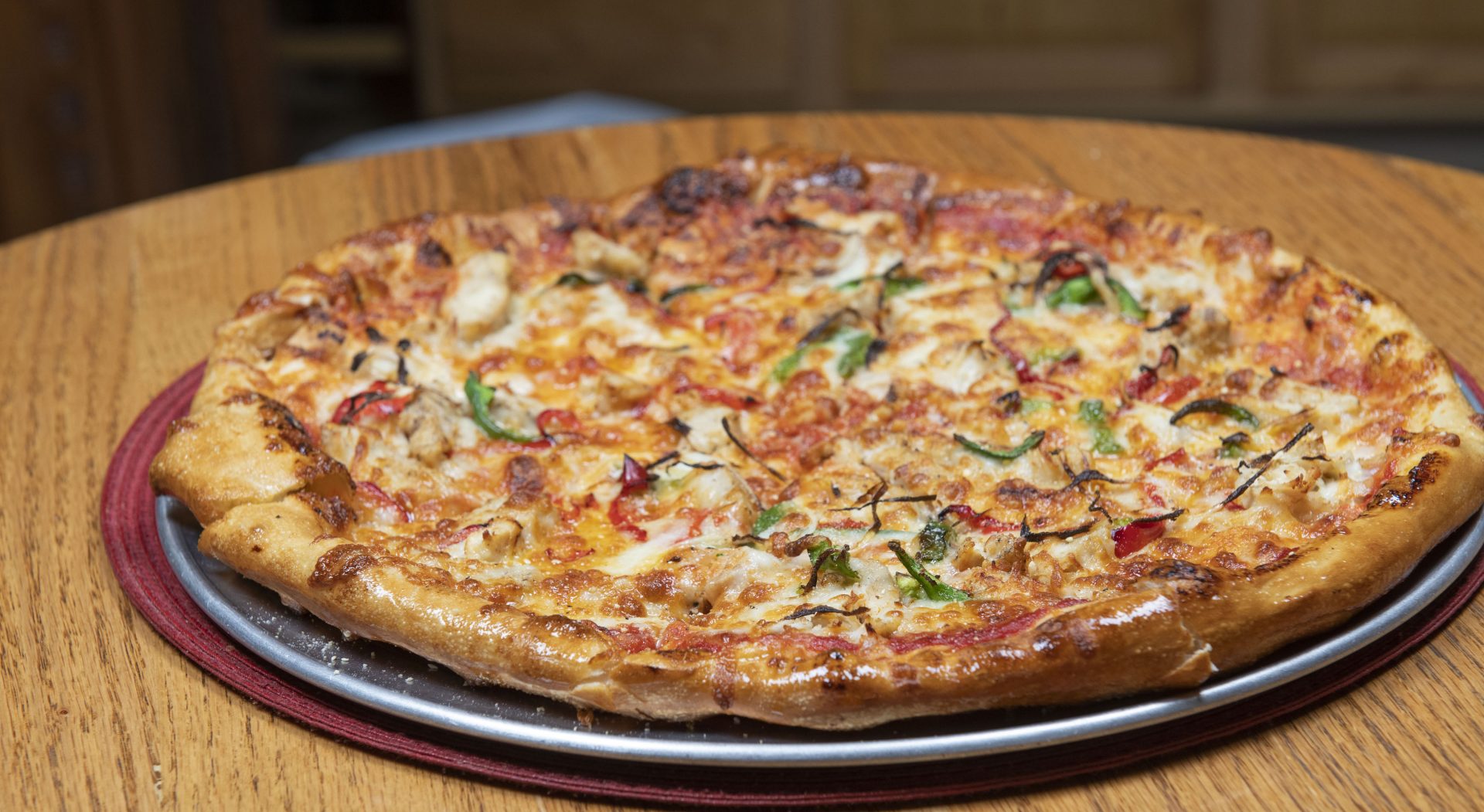 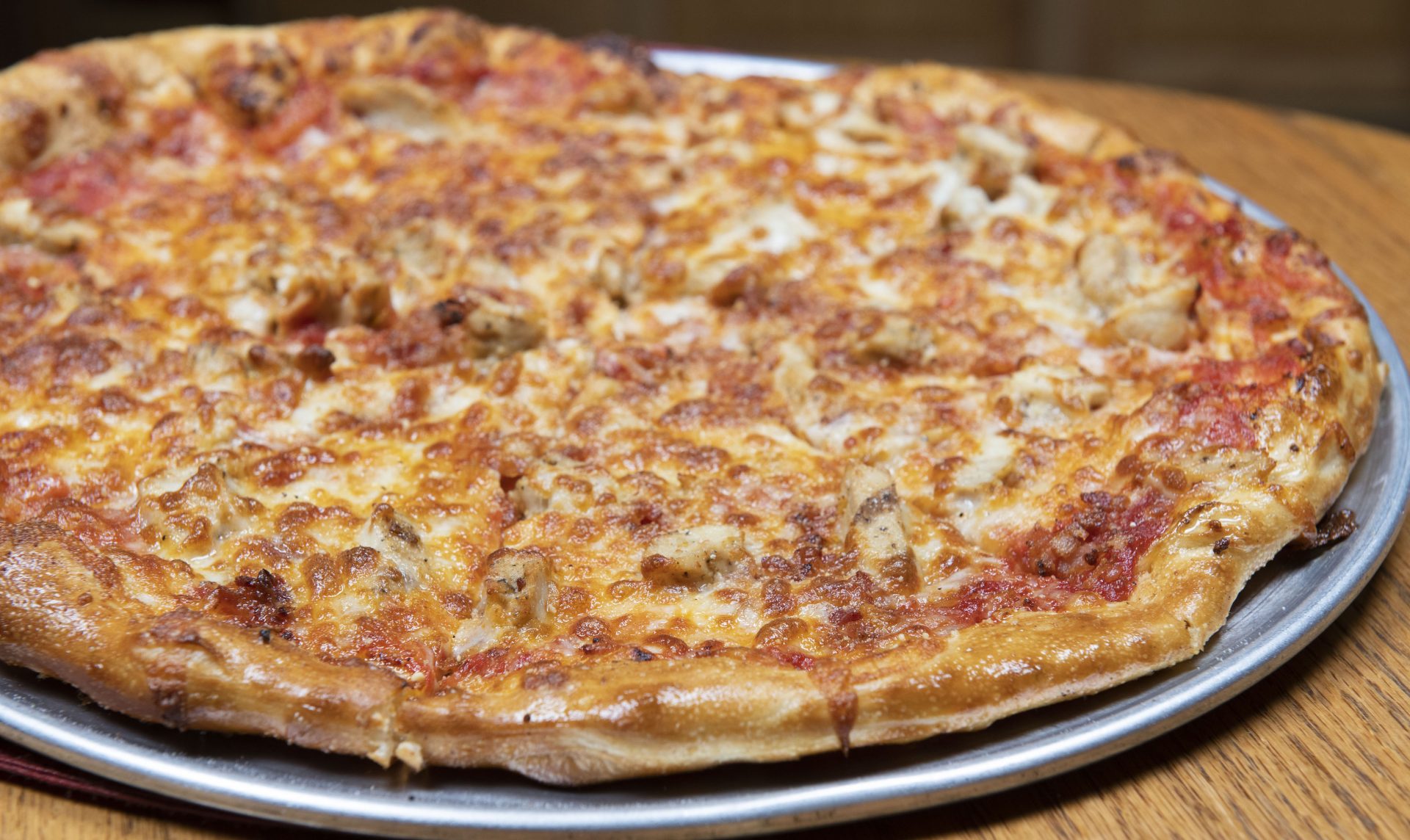 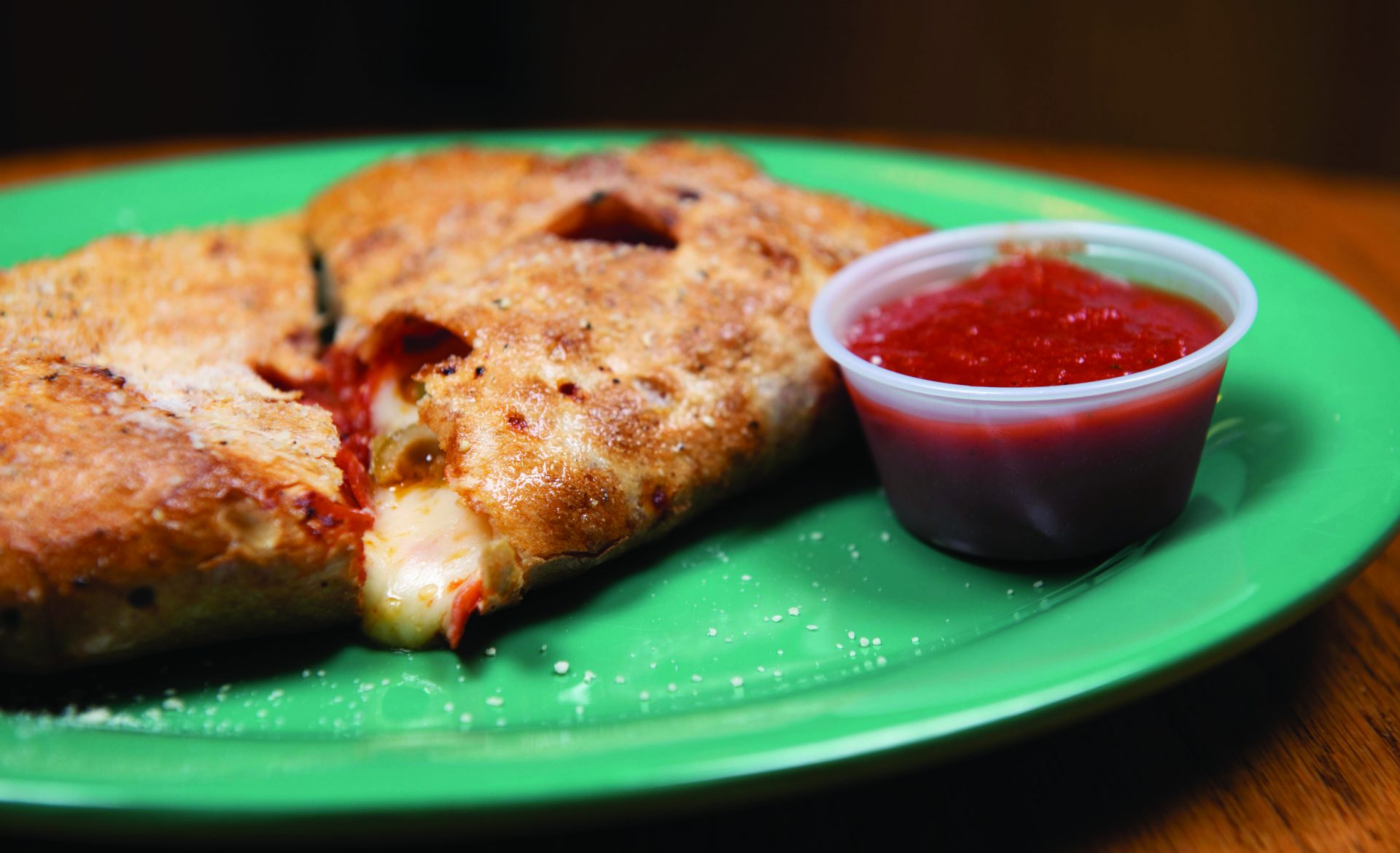 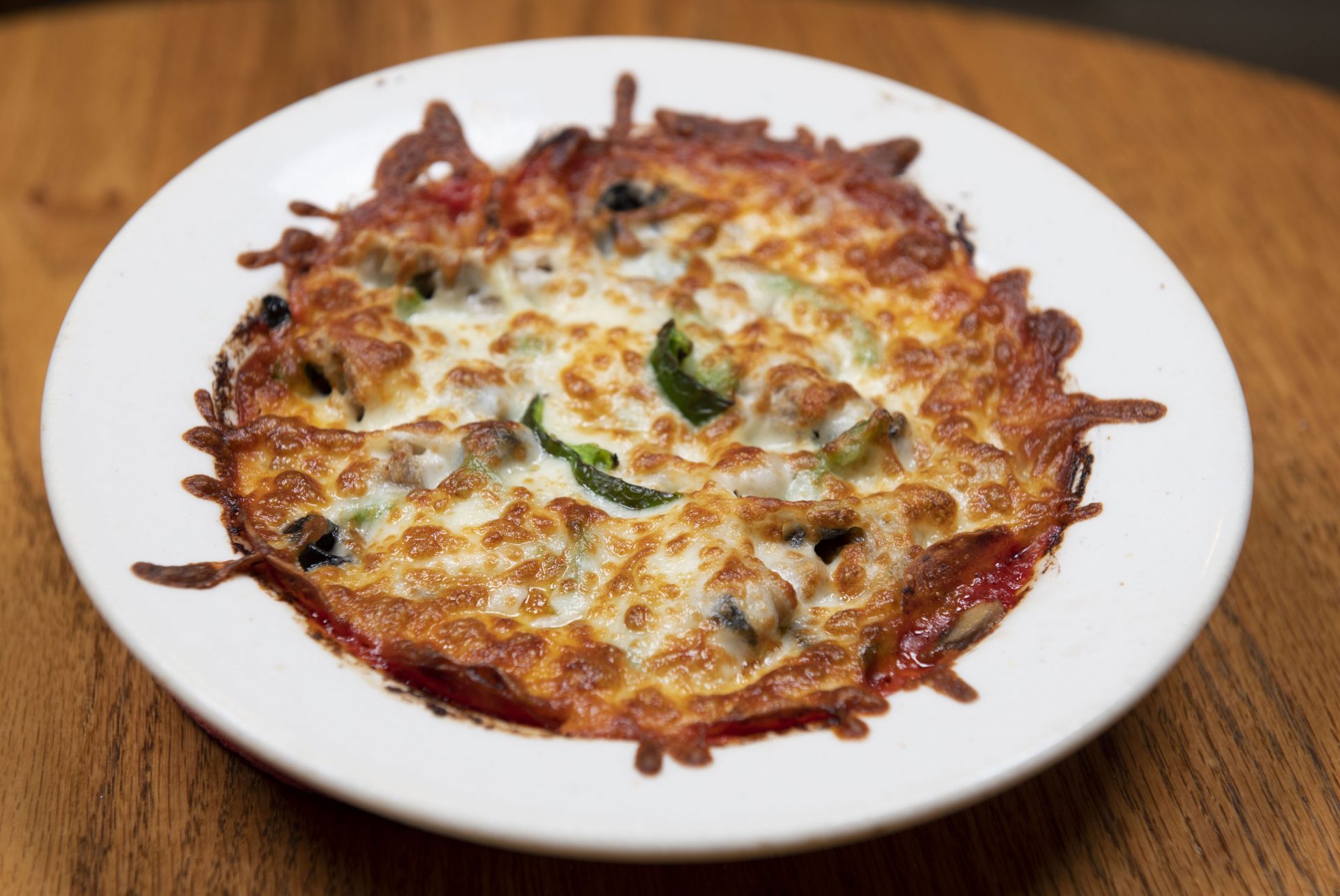 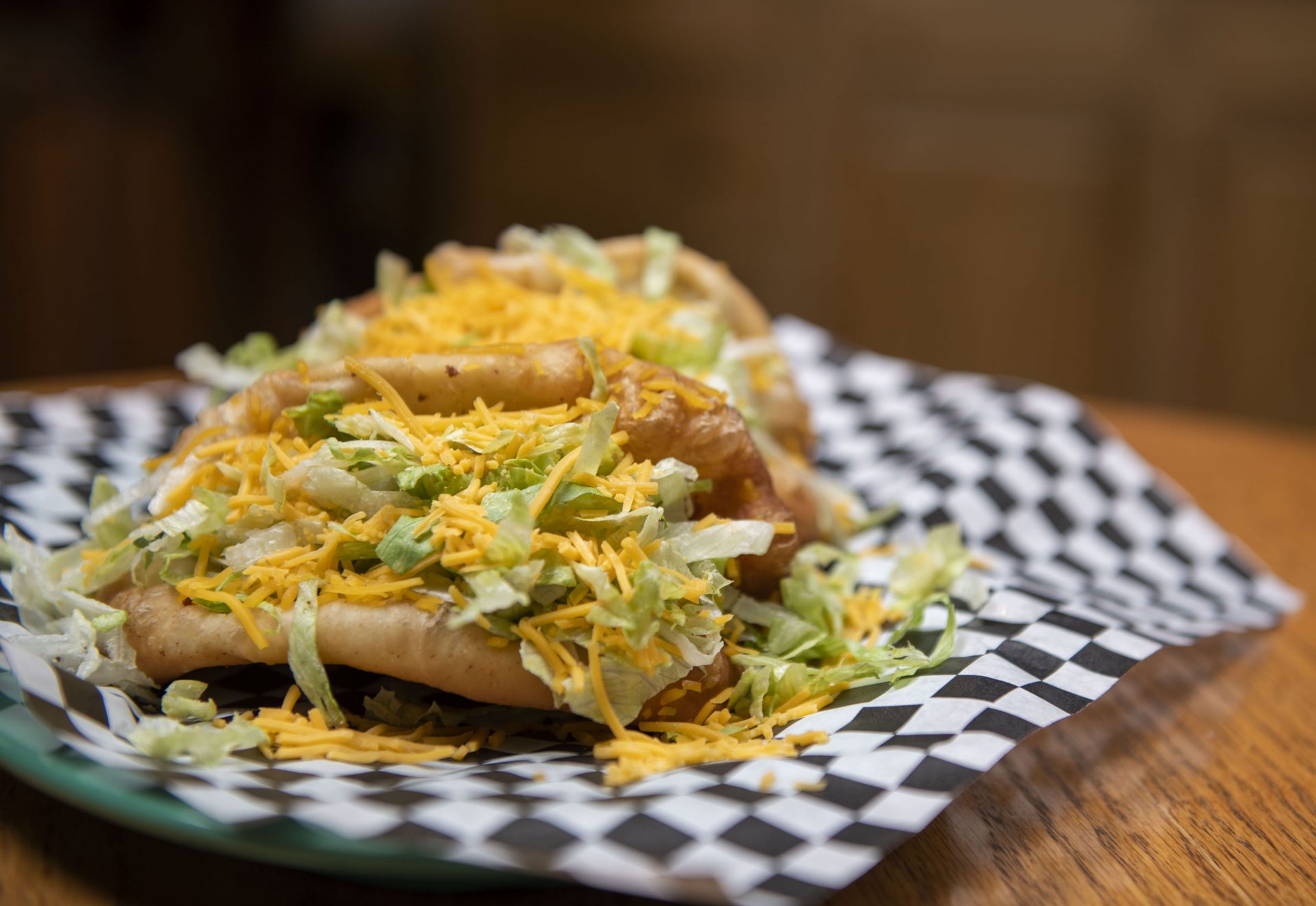 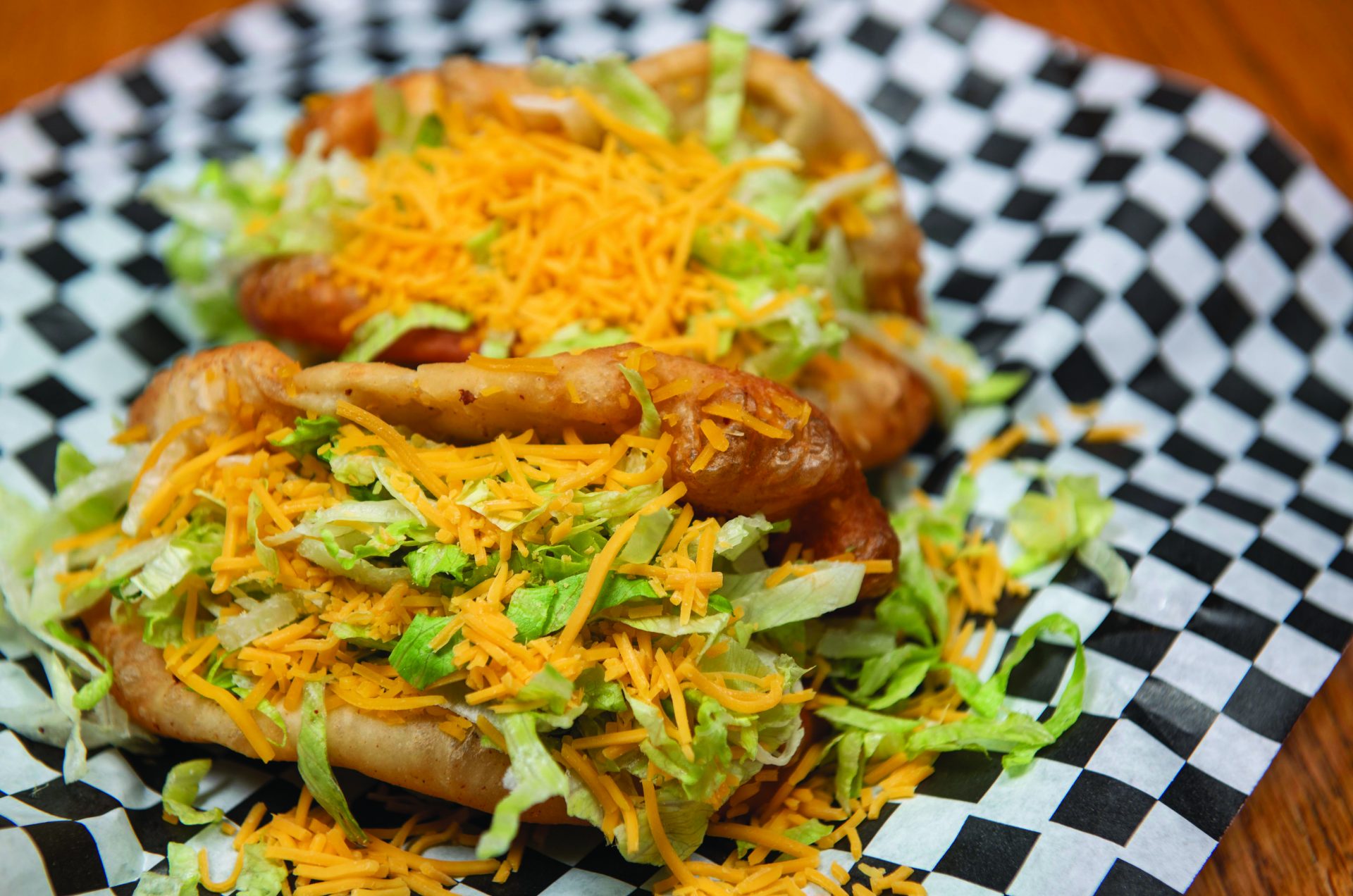 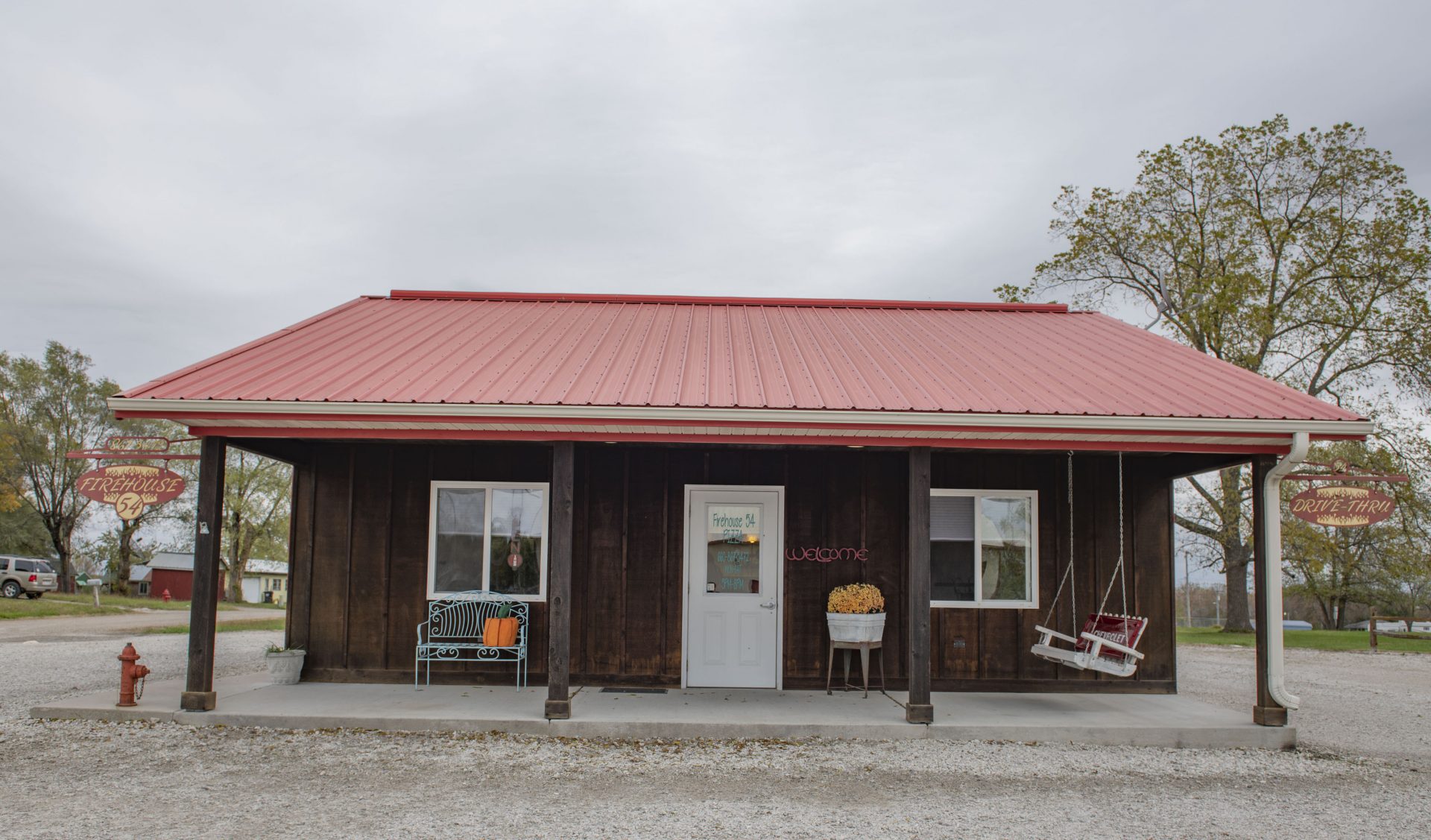 The chicken fajita pizza is one of the most popular. Marinara goes down and is topped with peppered chicken, green and red peppers, onions and a blend of mozzarella and provolone. After baking the crust is buttered and a garlic sprinkle goes on top.

“It’s just like a fajita without the tortilla and a crust instead,” Tana says. “If you like the taste of fajitas with the onions and peppers, this would be a pizza for you.”

Tana serves up her chicken bacon ranch pizza just a little different than you may have tried before. The dough is topped with marinara and a ranch seasoning first, followed by chicken, bacon and the cheese blend. The pizza is a popular dish and is usually accompanied by a side of ranch dressing for dipping.

Other specialty pizzas include the chicken bacon artichoke, Buffalo chicken and barbecue chicken.

There are 15 topping options from which to choose if you plan on building your own pizza combination. One unique item Tana offers on her pizza is cream cheese. She says it adds a richness to the pizza and is popular for those building a Hawaiian pizza with Canadian bacon, pineapple and cream cheese.

There are two days per month where you won’t find a single piece of crust, marinara or mozzarella cheese being served at Firehouse 54. “We have Taco Tuesday on the second and fourth Tuesday of the month,” Tana says. “Those nights we’re just tacos, so no pizza.”

However, these aren’t your normal tacos. Tana starts with a flattened light, soft dough. Taco meat is placed in the center of the dough and it’s folded over and lightly crimped. After a short bath in the deep fryer the dough opens up just enough. When it’s done, lettuce and cheese are added and it’s served with salsa and sour cream on the side.

“It’s like a fry bread taco or a puffy taco,” Tana says. “It’s something different and is a big draw when we make them.”

The night has become so popular that Tana and her team now serve up around 250 tacos during the three hours they’re open.

In November, Firehouse 54 teamed up with the firefighters from the North Harrison Fire Protection District for the second time to raise funds for the department. The fire auxiliary members make cookies and have soda donated to add on to any Firehouse 54 delivery order that night, which is of course delivered by the volunteer firefighters in the firetrucks. This year they sold 103 pizzas that evening, a record for the restaurant.

“They had videos on Facebook of kids jumping up and down when the firetruck showed up,” Tana says. “It’s an exciting thing for our community and they do it all for tips.”

Those connections throughout her small community are what Tana cherishes most. During construction of her restaurant, she set up her kitchen so she would be within eyeshot of everyone who walks through the front door or pulls up to the drive-thru.

“When I retired from the beauty shop, I knew I would miss seeing people from the community every day,” she says. “The best part of this for me now is getting to see everyone that comes by. I’m a people person.”

Specialties: Build-your-own and specialty pizzas, including chicken bacon ranch, Buffalo chicken and bacon artichoke. Also available as calzones and Pizza Bowls. Tacos on the second and fourth Tuesdays of the month. Ice cream and ice cream cookies for dessert.

Details: Open Monday to Saturday, 5 to 8 p.m. Closed Sunday. Cash, check and major credit cards accepted. Nonsmoking. Located at 12048 12th St. in Eagleville. Contact at 660-867-5472, visit them online at www.firehouse54.com or follow them on Facebook.