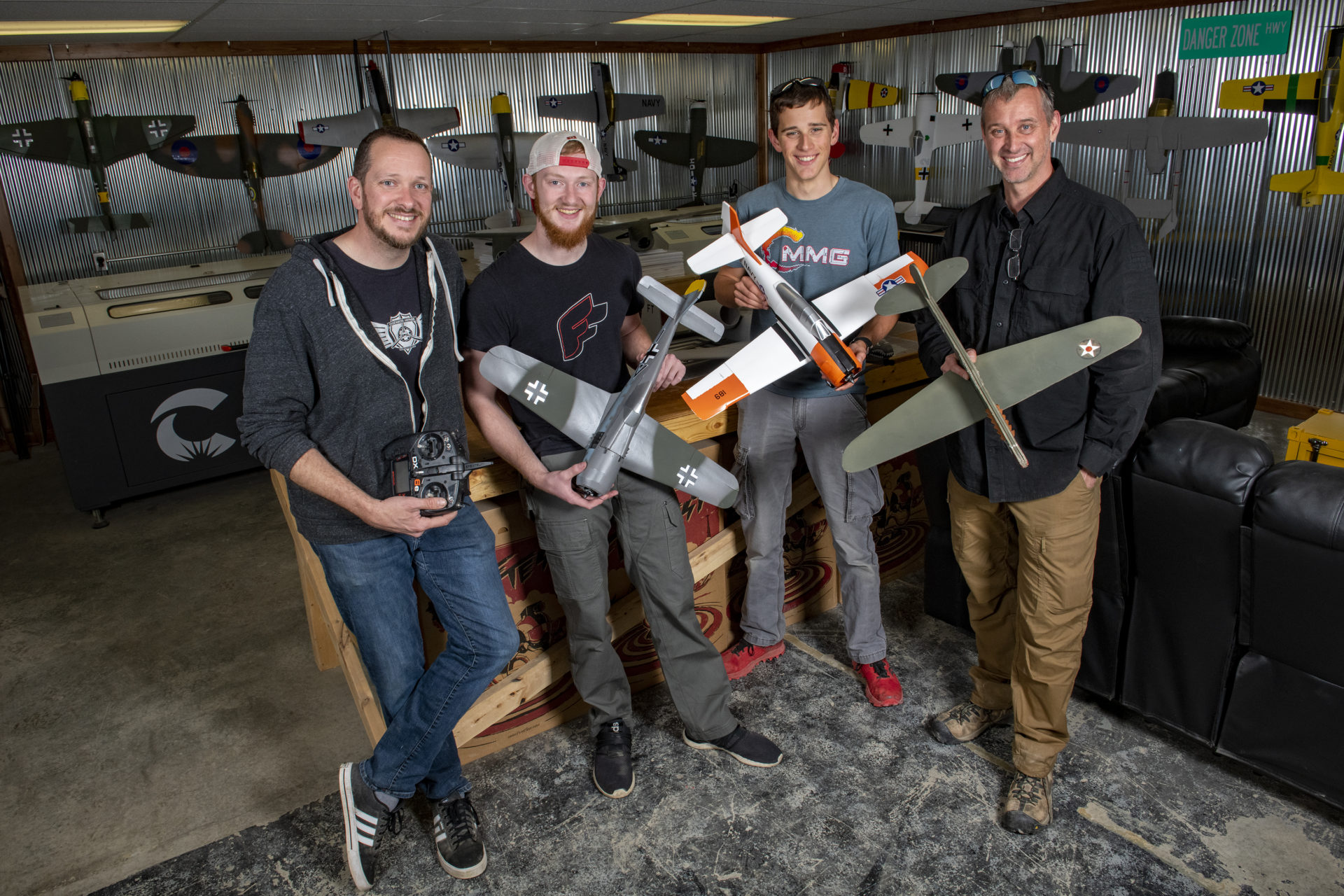 In between the laser cutters and dozens of models lining John Overstreet’s shop in Fayette, you’ll find his first jet fighter. It’s detailed in pen and paint, fits in your palm and will fly about as far as the other side of the room. It’s framed behind glass like any memento, a reminder that sky-high dreams often have humble origins and sometimes even come true.

“ ‘Top Gun’ had been out for a long time and I always loved F-14s,” John says of the paper airplane. “I always had kits in mind but never got it off the ground, so to speak.”

John’s childhood dreams of designing and marketing aircraft finally took to the skies in 2018. He and son, Jesse, attended Flite Fest in the small town of Minerva, Ohio with the intention of flying Jesse’s drone. Soon the duo found themselves caught up in the fever of building foam board radio-controlled (RC) planes with the other attendees. Three months later, both were still captivated by the hobby. John, his passion for designing and building airplanes renewed, reached out to the event’s organizer, Flite Test. John wanted to get into the model airplane business and called to get pricing on foam board; company founder and president Josh Bixler had a different partnership in mind.

Since 2010, Flite Test has served as a global ambassador to the hobby of building and flying RC aircraft. In addition to hosting flying events at Edgewater Airpark in Ohio and designing and selling RC planes and drones, the company has built a community around its YouTube channel. Nearly 2 million subscribers regularly tune in to catch the Flite Test Tech videos on builds of new models, or to see what whimsical project the crew is able to put into the sky. “Star Wars” spaceships, bomb-dropping Stukas and even an 18-foot foam board battleship are just the tip of the airborne iceberg.

In between the tips, tricks and spectacular crashes, viewers find that laughing when things go wrong is just as important to the hobby as celebrating when things go right. Josh and John know it’s part of the process of learning to fly: The rewards of a well-executed barrel roll and a perfect landing don’t mean quite as much without all of the wrecks it took to get there.

Similar to John, Josh’s path to the runway started at a young age flying with his father in a single-engine two-seater and building model planes. As thrilling as actual flight was, it was the hobby that would ultimately change his life. Months spent building balsa wood models culminated in 15-second flights followed by spectacular crashes, with a young Josh learning a little from each experience.

“Finally, two years later I was able to build a plane that would circle, but it wasn’t the victory of that that I remember — it was really my dad’s encouragement.”

Years later as an adult working in youth ministry, Josh put his love of the RC hobby to use connecting family members who had drifted apart emotionally — particularly fathers and sons.

“They fall in love with what we call ‘shoulder time,’ where people are next to each other engaging in a common activity,” Josh says. “That’s the goal. Our tool is airplanes.” 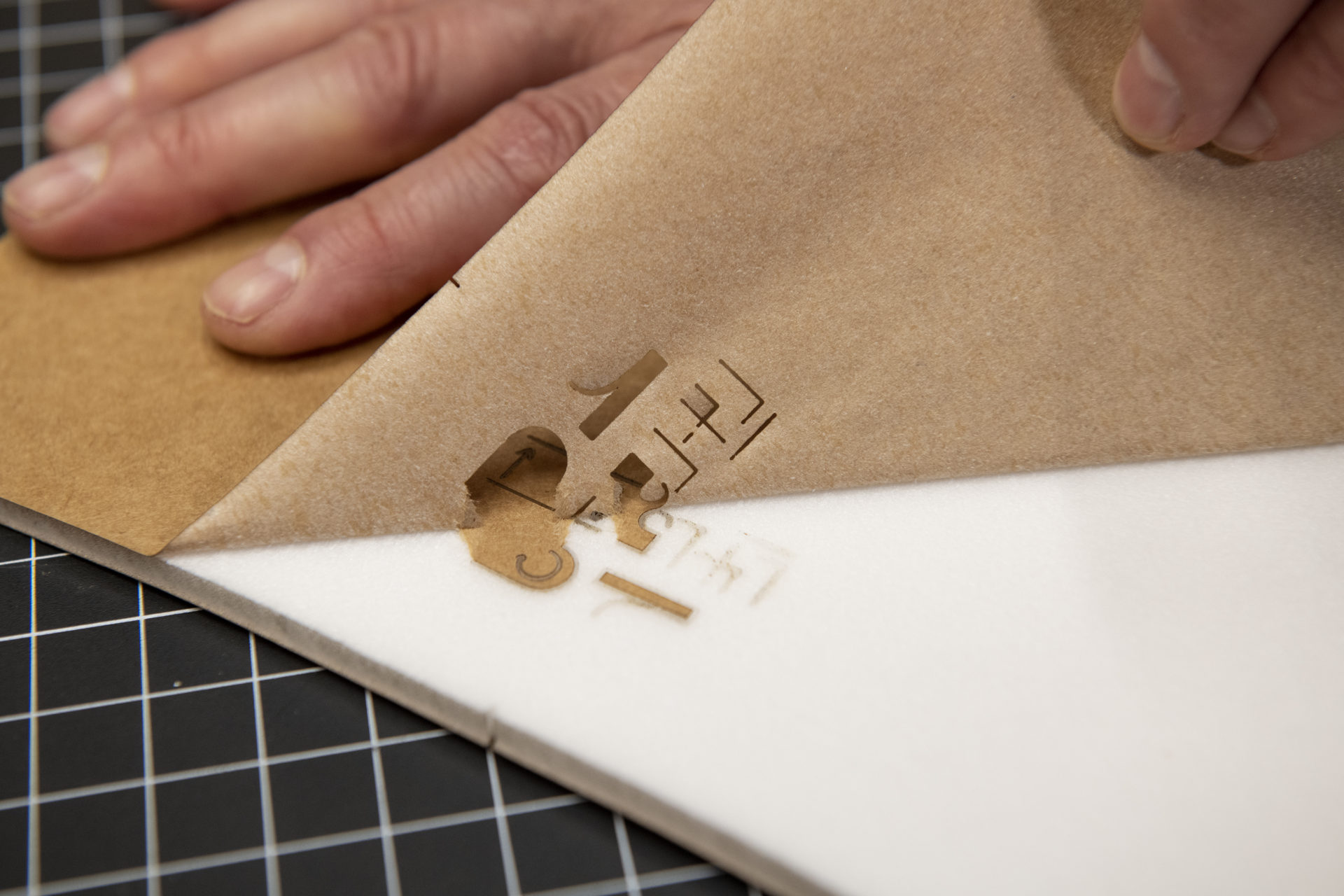 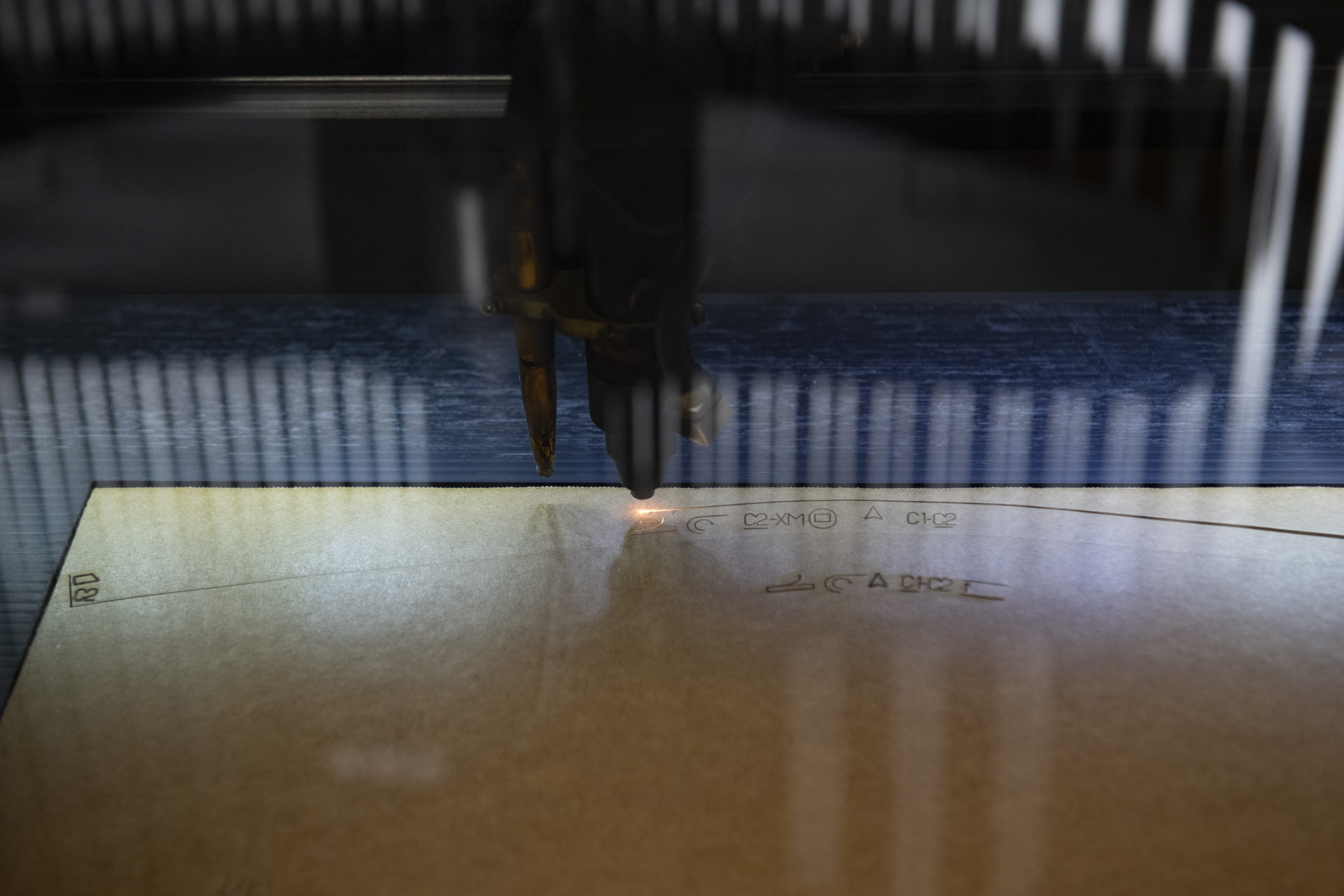 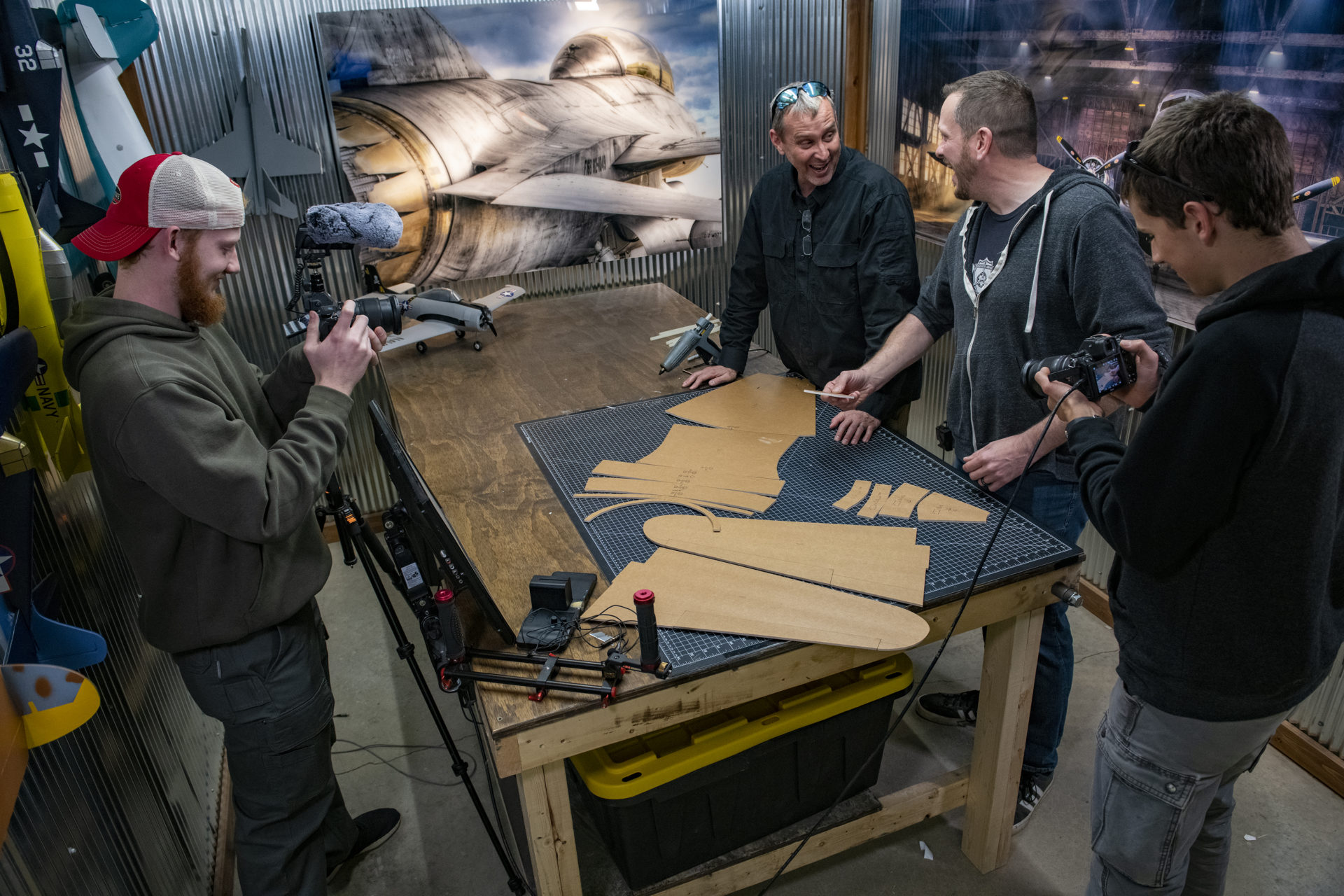 To make the hobby approachable, Josh knew he had to bring the barriers to entry — namely the cost of the models and components — down significantly. He combined the expensive components into a swappable power pack, so that when one foam board airplane crashes the electronics survive and can be inserted into another model and used with the same radio control. A starter kit, electronics and all, costs around $200 with some airplane-only models costing less than $20. All of the materials used in the planes are sourced in the U.S., and combine to create planes which fly true to their real-world counterparts. The company even developed a microchip to enhance the stability of the aircraft and, in addition to other beginner-friendly features, assist with launching and leveling the plane on take off.

John and Josh agree the most important skill to building a plane isn’t technical knowledge or previous experience, but patience.

“If you can hook up two strands of Christmas lights and not burn the house down, you can build an airplane,” John says, adding that crashes are part of the learning curve. “It’s going to happen. The best way to say it is, ‘I haven’t crashed yet … today.’ ”

Making the hobby easy and approachable had only one drawback, according to Josh: die-hard hobbyists crave a challenge. John’s skillset, designing more detailed aircraft out of molded foam pieces, helped solve that problem when he officially joined the Flite Test team in April. His realistic recreations of dozens of World War II classics will give enthusiasts something new with which to test their skills.

“I’ve built modern jets, airliners like 737s, but I really gravitate toward the WWII planes because there was so much going on technology-wise,” the Howard Electric Cooperative member says. “The survival of nations depended on new designs.”

Designs start with researching a particular aircraft and turning that model into 3D graphics. Lasers cut each piece to specifications. John builds the model and then, in a process he calls “angry beaver,” whittles away at the prototype by hand until everything has been adjusted to perfection. The changes are then fed back into the computer so that the lasers will replicate perfect cuts of the new design, ensuring Flite Test customers receive a consistent build experience with each model.

“To get someone from their first plane to this level does not take very long,” Josh says, pointing out a massive A-10 Warthog that engulfs one nearby worktable. “These planes give you the ability to afford to crash. And when you can crash and fail at an accelerated rate, you learn at an accelerated rate.”

John also brought innovations to the table, including laser cutting the assembly instructions into the foam pieces in a process called symbol mapping. The “fly-roglyphics” negate the need for a separate paper instruction manual and allow more advanced builders to focus on the parts of the tutorial YouTube videos where they need a few pointers. With an expanded manufacturing facility he hopes to add waterproof, color-printed pieces to the menu of options, which gives builders another choice if they don’t want to paint their own design.

First in line is a re-creation of his uncle, Walter Thies’ Grumman F6F Hellcat complete with the original paint scheme, tail number and palm leaves along the wings paying tribute to his stories of strafing runs in the Pacific Theater. The same process, John says, could be applied to celebrate the planes of other veterans. “History is being lost, and we need to find those neat stories or very specific things that happened to their aircraft we can represent on a skin.”

Replicating his own entry into the world of Flite Test, John also holds free events at the Fayette facility, showing eager and determined pilots the joys of flying RC planes and penny gliders. Stacks of laser-cut boards cover the shop tables, and by the end of the day there are a lot of foam F-16s and even more smiles.

Next on Flite Test’s horizon is educating the next generation of pilots and engineers. To that end, the company hired teachers to help create a science, technology, engineering and mathematics, or STEM, lesson plan for K-12 students. The aviation-based curriculum also incorporates robotics, physics and literacy lessons and bases problem solving around engineering design. The program is taught by 700 teachers to more than 3,000 students plus home-schoolers in the U.S., Europe and Australia. Josh says students have not only gone on to study aviation in college but also are bringing that passion for the hobby home. With John’s facility aiding production, he hopes to grow enrollment in the course in coming years.

“Everyone has the desire to build a family relationship, and this helps that process,” Josh says. “You can learn to encourage, laugh, fail, assess things and make memories along the way.”