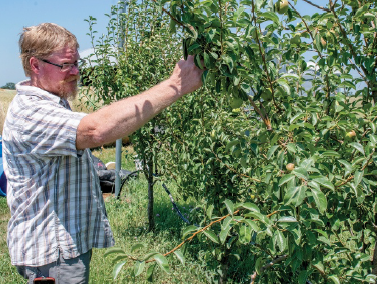 Walking through his orchard on a hot summer day, Jim Pierce quickly points out the varieties of apple and pear trees dotting the northwest Missouri farm. What started as herb, vegetable and flower gardens when his family first moved to Ray County nearly 30 years ago has turned into a rolling landscape where these fruit trees are just the beginning of an impressive operation.

Jim and Sarah Pierce own Of The Earth Farm + Distillery where they raise fruits, vegetables, livestock and distill spirits. They use their homegrown produce or partner with small, local farmers as much as possible to create unique, delectable products that are distinctly Missouri.

The Pierces backgrounds have prepared them for both the traditional and nontraditional agriculture at their farm. “It’s just an interest in doing things that seem interesting,” Jim says. “I’ve always liked to grow stuff and Sarah grew up on a traditional farm.”

With the exception of a few hogs, the orchard was the focus of the farm when Jim and his father, also Jim, attended a fruit growers’ conference a little more than a decade ago. One of the presentations was on adding value to tree fruit through distillation. The wheels in younger Jim’s head began turning.

The Pierces partnered with the Missouri Agricultural & Small Business Development Authority (MASBDA) to utilize a grant to complete a feasibility study, marketing and business plans. “At that point there were only 12 or so license holders in the state,” Jim says of the distilling license. “Now we’re approaching 70.”

With the studies and plans in place, Jim began using his fruit to test recipes for apple brandy. The distilling process leaves behind spent mash which is high in protein with no energy. He thought the mash could diversify the diet of his hogs and offset feed costs.

“Coincidentally at that time, I made contact with a new restaurant that wanted to be ‘tip to tail,’ ” Jim says. “That market fits us really nice.”

Of The Earth was starting to take shape and the Farmers’ Electric Cooperative members began scaling up incrementally. They added Berkshire hogs and Katahdin sheep to advance their livestock population, now raising 70 hogs and 15 sheep annually.

“The animals are really enjoyable,” says Sarah, whose family farm included hogs, cattle and row crops. “When you’re out there every day, you get to know who’s who and have different interactions. It’s very peaceful.”

Jim “borrowed” his mother, Patricia’s, 320-square-foot art studio for distilling for the first few years. Jim and Sarah expanded their line of spirits in the room, 2 miles down a gravel road from Highway 13. Their distillery opened in earnest in December 2012.

As more and more customers discovered Of The Earth, an expansion and tasting room was needed. They secured a property right on the highway and again with the help of MASBDA, renovated a 1,500-square-foot building to house the distillery and tasting room which opened in May 2018.

The fruit at the farm works triple duty. It’s sold for fresh eating at the tasting room or City Market in Kansas City, it’s sold wholesale to a Kansas Cityarea food cooperative and used to create Of The Earth’s premium products.

Almost everything in the tasting room is made from produce grown on property or from small farmers, local if possible. “These collaborations open up who we are exposed to and helps us do better overall,” Jim says.

Blackberries come from Lathrop, extra apples from Waverly, rye from Odessa and beets are grown onsite for distilling. “We can’t grow raspberries in Missouri, so I go to New York,” Jim says. “But it’s still from a small network of farmers there.”

Hungry in the tasting room? Order a charcuterie board which includes Of The Earth cured meat, kimchi made in Kearney and bread from Kansas City served on a Missouri-made platter. “We’re not just talking about sourcing local, we’re doing it,” Jim says.

Apple Brandy and Pommeau are their signature spirits. The flagship brandy starts with a blend of the apples they have available and is aged for two years in Higbee barrels. “A lot of people thought the Apple Brandy would be sweet, because there are some on the market like that, but ours is not” Sarah says. “The Pommeau is our answer to that.” Pommeau is a blend of the Apple Brandy and apple cider that is rested in the used barrels.

Other popular options include the raspberry and blackberry liqueurs as well as the Doña Fida, a coffee liqueur made with coffee from a Guatemalan farm.

Jim says the farm is transparent in what ingredients are used and shies away from manipulating the flavors. “There may be a little bit of a variance depending on a batch of berries or something,” he says. “That’s OK. We’re not industrial. It’s about discovering the pleasure of understanding the nuance.”

For Jim and Sarah, discovering those pleasures is a shared experience. From a part-time distiller brought on board to family helping label bottles or work the farm to partnerships with fellow farmers, they don’t want to be in this alone.

“It’s lifting all ships,” Sarah says. “There’s lots of small producers around that do a really good job. But they don’t have as easy of access to the market as the big guys do. But if we all work together, we can actually make a go of it.