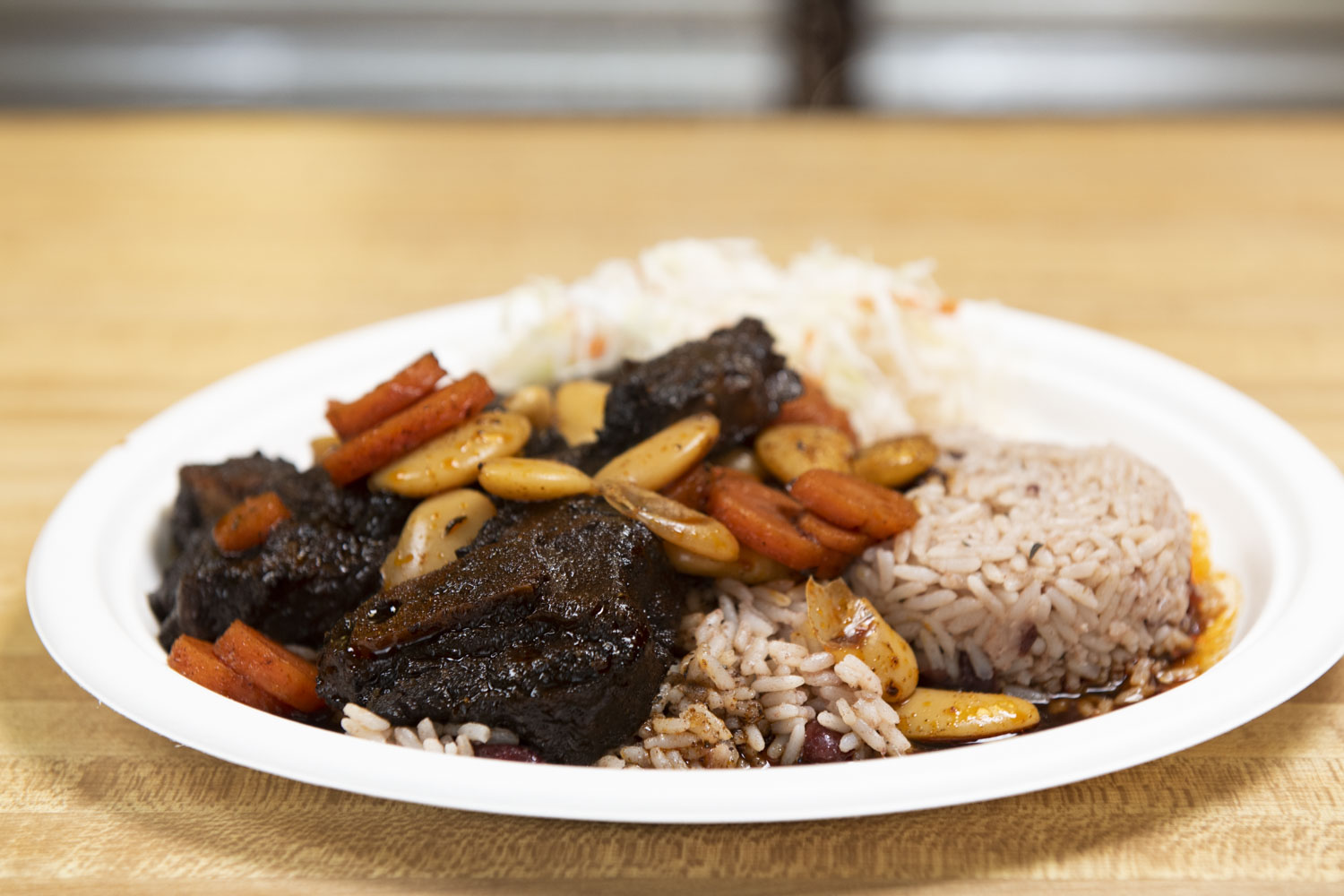 You can’t drive by without getting a whiff. The distinctive Caribbean smell of pimento berries, Scotch bonnet peppers and other island spices on tender meat billows out of the grill that is manned by Rex Scott next to a Jamaican flag. It’s an unmistakable smell that will lure you in for some unforgettable food.

Rex and his business partner and lifelong friend, Colin Russell, took their passion for jerking meat and turned it into the Jerk Hut food truck nearly two decades ago. Since then, they’ve expanded their business to include a pair of mid-Missouri brick-and-mortar locations that serve up authentic Jamaican appetizers, entrees, sides and drinks.

Rex and Colin grew up near the north coast of Jamaica, just east of Ocho Rios. Soccer brought the pair to Lincoln University in Jefferson City in the late 1990s.

“We were a small Jamaican community, so we would get together from time to time to cook and socialize,” Rex says. “It became a weekly event where we would pool our funds together and jerk chicken.”

The gatherings continued to grow and took the form of a business in 2001 with an idea from Rex’s wife, Tauwana. “My wife said, ‘Why don’t you sell that chicken that people seem to like so much at homecoming?’” he says. “We rented a grill and that was really the genesis of this.”

The Jerk Hut was born and the duo decided that a food truck was the most logical way to sell their delicious dishes. The Jerk Hut’s food is indicative of the street food you might find on the islands.

“Our most popular options are the jerked items,” Rex says. “The best way to describe it is like a Jamaican-style barbecue. It’s seasoned and marinated for at least 48 hours and cooked on the grill for about 1 1/2 to 2 1/2 hours. Our jerk seasoning is a blend we make in-house, with about 12 to 15 different ingredients, a lot of which we import from back home. It has a little kick to it, but the flavor profile is a little deeper, in my opinion, than traditional barbecue.”

Taking those distinctive and unique flavors to mid-Missouri and not to a bigger city was a no-brainer for Rex. “Mid-Missouri is a fertile ground,” he says. “We made a conscious decision to stay. We felt like the opportunities for personal and professional growth were good and from a business standpoint it grew parallel to that.”

Rex says the biggest barrier they’ve faced is people assuming all of their food is spicy. “We’ve moderated that quite a bit here,” he says. “We try to put more of the spiciness in the sauce and not the seasoning. So people can decide if they want a lot of sauce, just a little or none at all.

Rex says that the Jerk Hut’s flavorful menu revolves around the island spices and “good vibes.” That starts with the first item on the menu, “Ya Mon’ J.” In jest, the traditional Jamaican response is listed on the menu as free. While that friendly attitude is a great start to your visit, it gets better with the food.

Jerk Chicken is the top seller at the restaurant. Chicken quarters are seasoned and marinated for at least 48 hours and spend approximately 2 hours on one of Jerk Hut’s large grills. Once it is perfectly cooked, the chicken is served with a pair of sides. The most common combination is potato salad and coconut red beans and rice.

“The flavor profile has got that tropical mix of the seasonings that’s just a little bit spicy from the rub, but also a little sweet and smoky,” Rex says. “Not overly smoky though since they’re grilled and not smoked.” 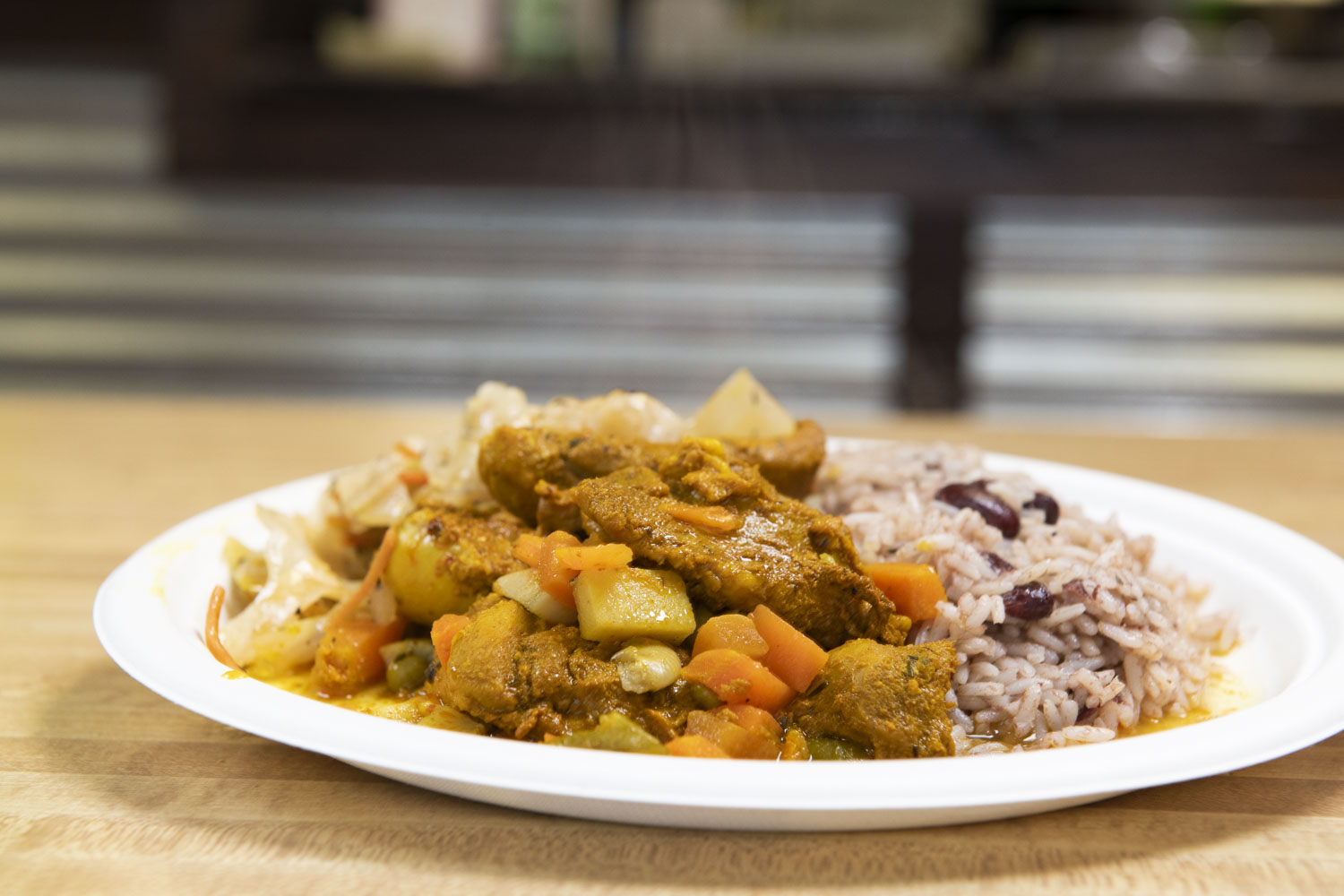 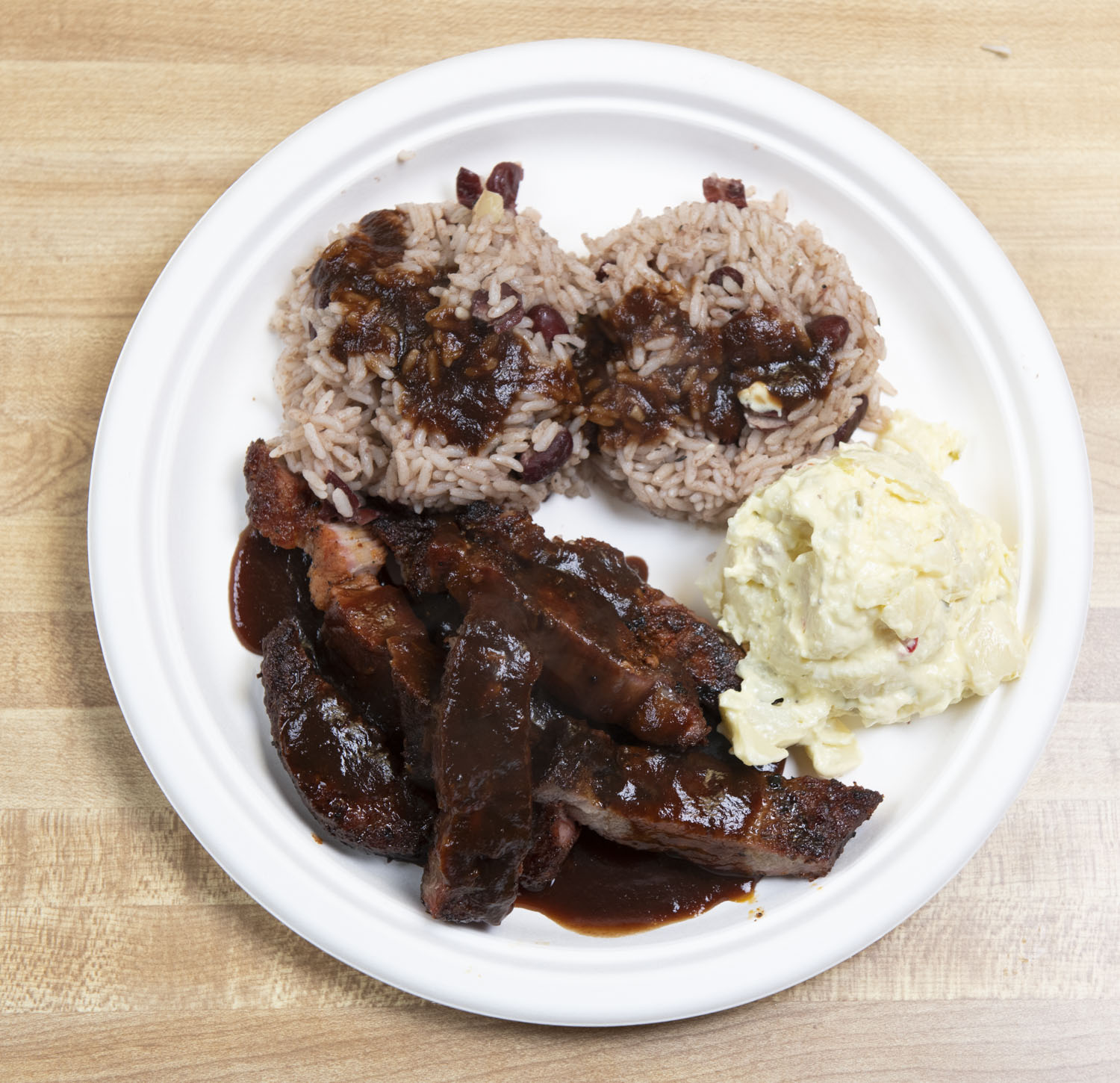 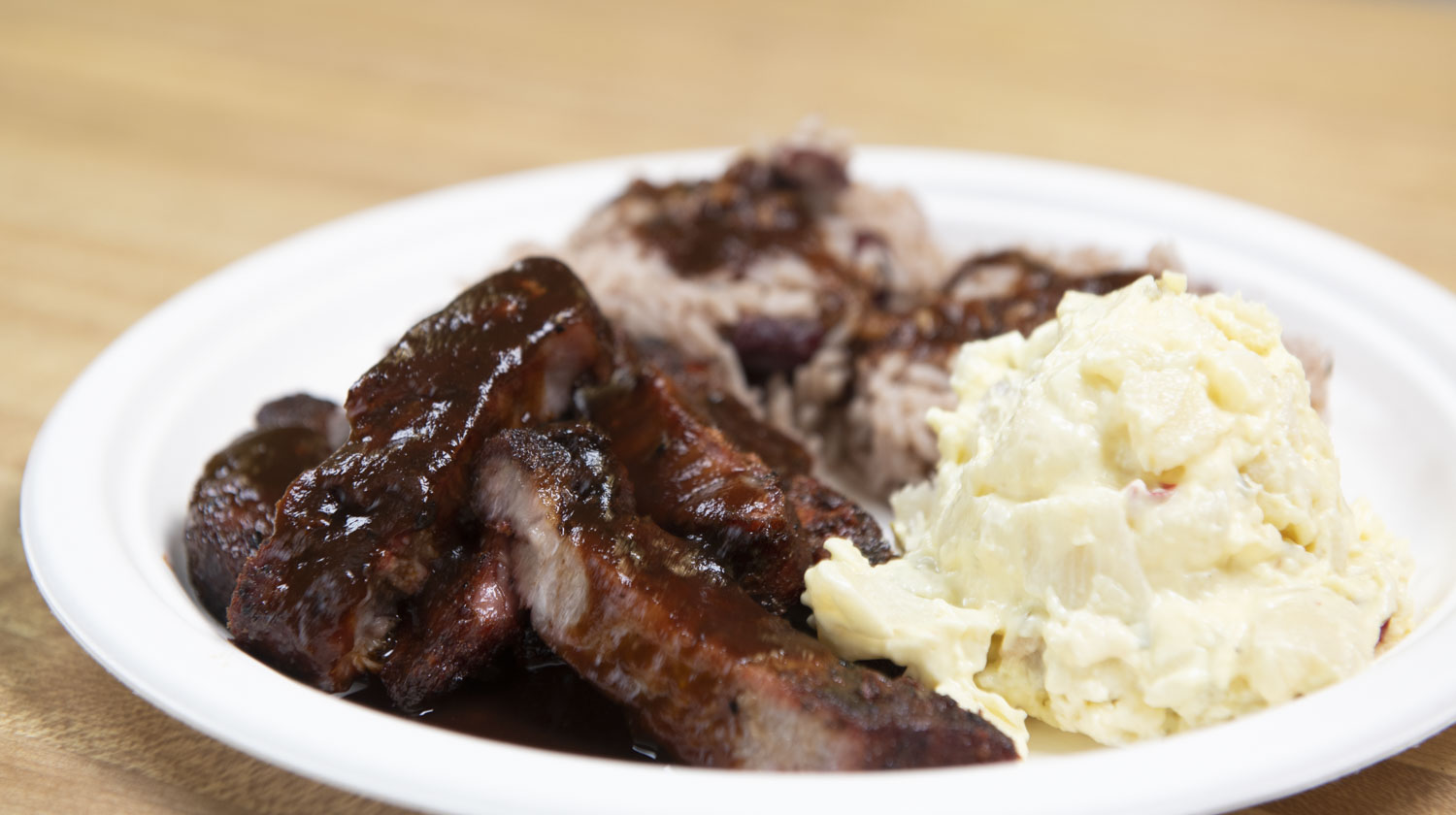 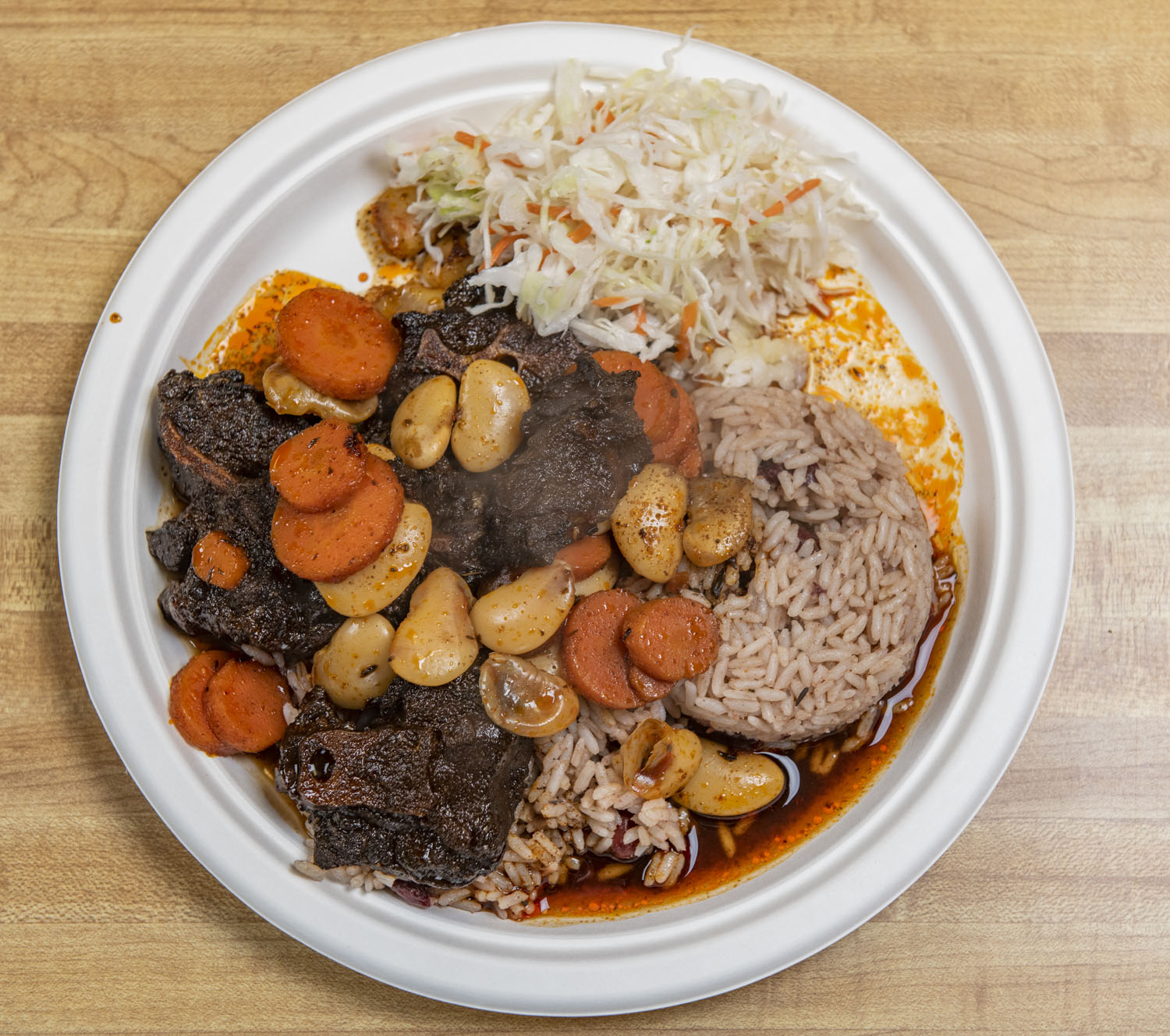 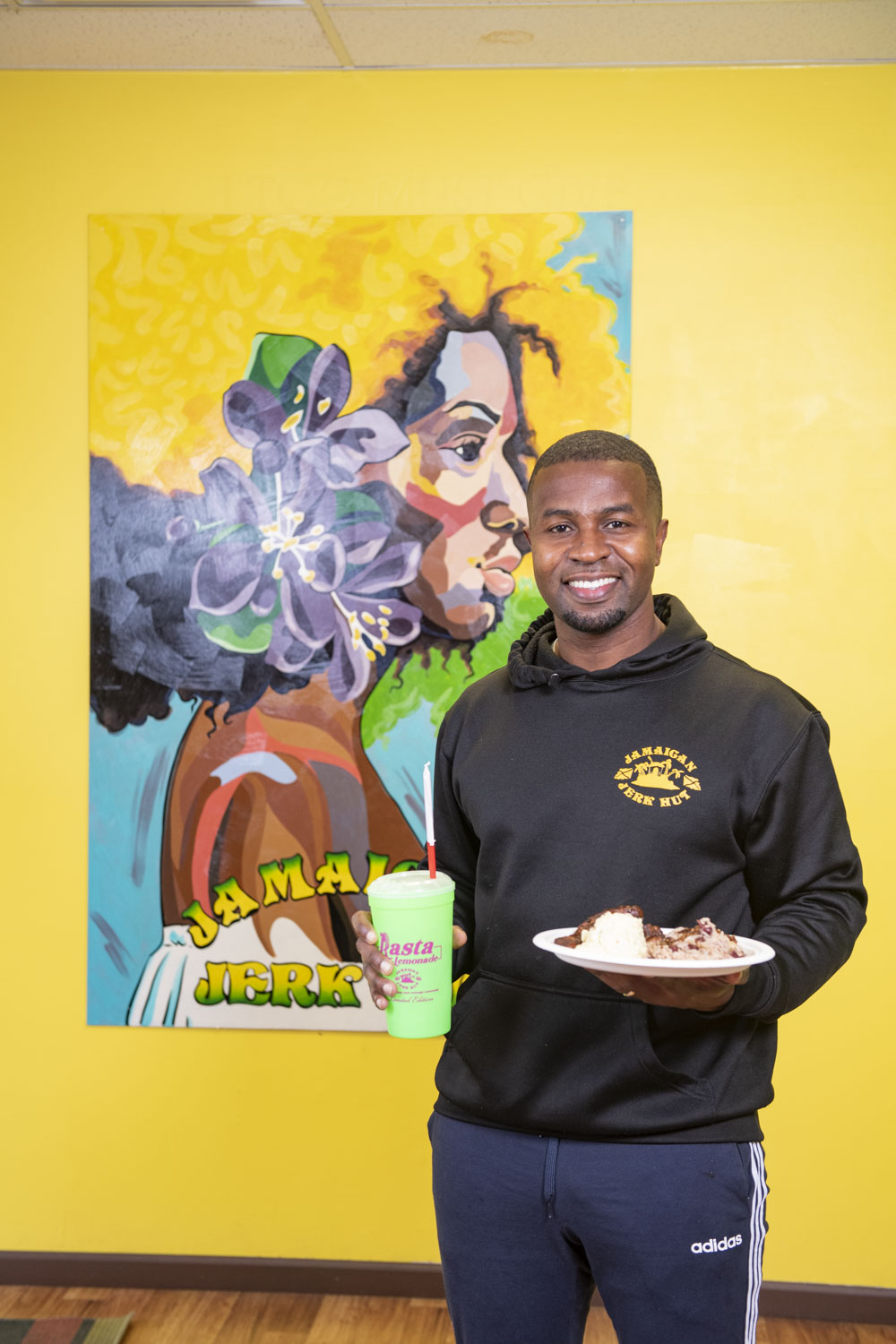 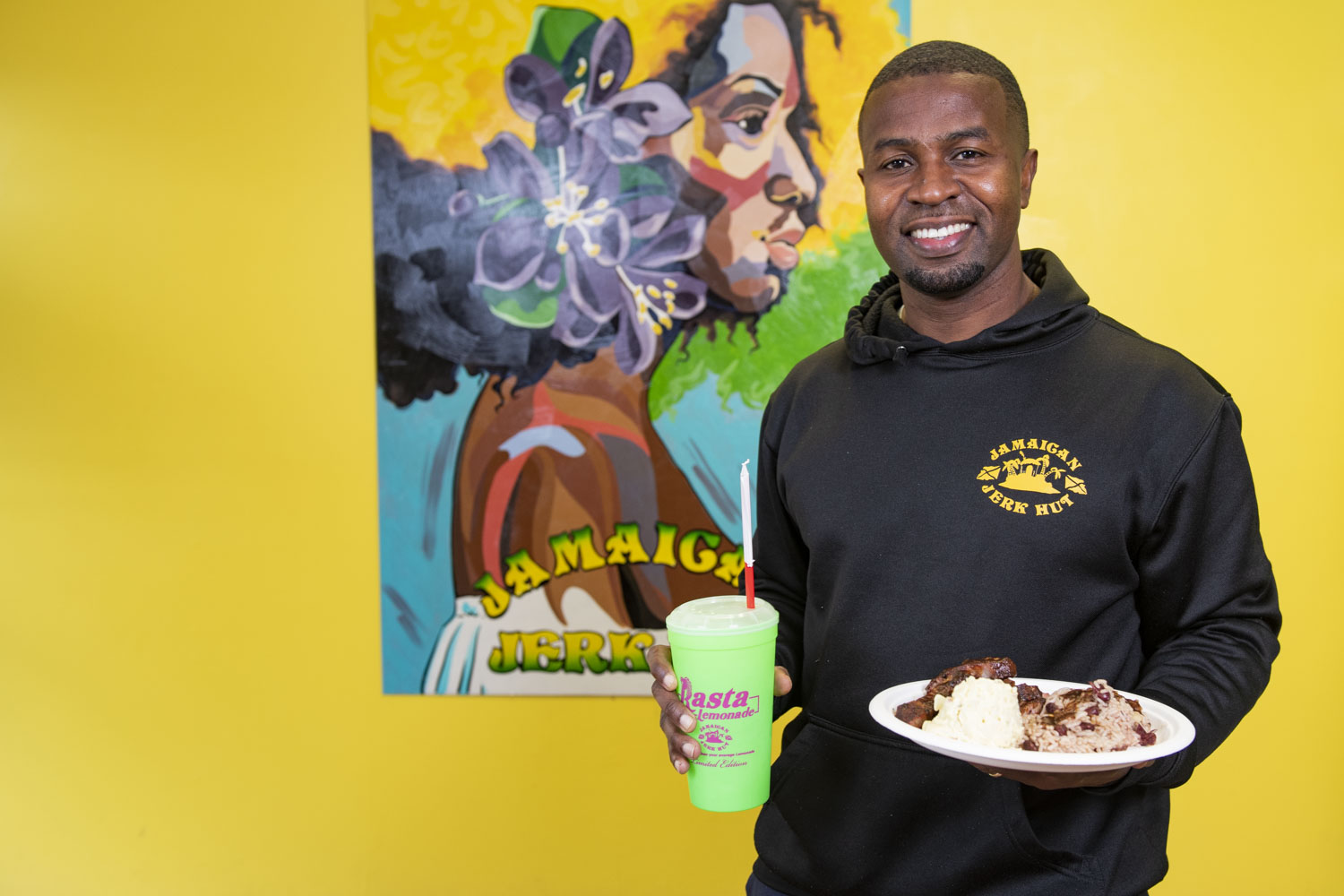 Another popular dish highlights Rex’s and Colin’s ability to impart their island flavors into a Missouri mainstay. “Traditionally back home we don’t do pork steak,” Rex says. “The cuts are more sophisticated here.”

The 1 1/2-inch pork steaks get the same seasoning and marinating treatment as the other meats before spending a little more than an hour on the grill. Upon service, the steaks are cut into strips. “Some people think they might be ribs when they see how it’s served,” Rex says. The dish comes with a sauce Rex says resembles a traditional barbecue sauce with a little sweetness and a little heat from the Scotch bonnet pepper.

Other items to whet your whistle include the Curry Chicken, Rex’s favorite, or the oxtail which is braised for 3 hours with beans and sliced carrots. Appetizers include Jamaican Johnny Cakes and Jamaican Beef Patty.

There are a handful of sides from which to choose, but the most popular is the coconut red beans and rice. “We use kidney beans and cook it in coconut milk and add in ginger, scallions and a lot of spices. It’s kind of a seasoned rice.”

A visit to one of the Jerk Hut’s two locations or mobile trailers wouldn’t be complete without their signature drink: Rasta Lemonade. When the truck first opened, they were continuously running out of $1 bills. They thought the idea of a menu item available for $1 might solve that problem.

“Jamaicans are famous for remixing stuff that everyone else does, but doing it a little differently,” Rex says. “We decided to do the lemonade, but do it our way. That’s what a Rastafarian would do back home.” Their creation includes far more than the typical water, lemon and sugar lemonade you might be used to. It’s a combination of sweet and tart with an explosion of tropical flavors, including the unique taste from mammea apples that Rex and Colin import from Jamaica.

The Jerk Hut has continued to grow since that first Lincoln homecoming appearance in 2001. In 2018, they added a brick-and-mortar location just off of Interstate 70 in Columbia. They added a second location in Jefferson City in 2020 to go along with both food trailers. While a majority of their business is takeout, they do have a few tables in Columbia and even more in Jefferson City.

Rex says he loves sending customers home with delicious food but the restaurants and food trucks are about more than just their delicious fare.

“We’re just a small snippet of the Jamaican diaspora and we consider what we do an extension of ambassadorship to a certain degree,” he says. “We hope it can give you a window into Jamaican culture, and we use food as our vehicle for that. We’d like to say that you come for the food, but come back for the good vibes.”