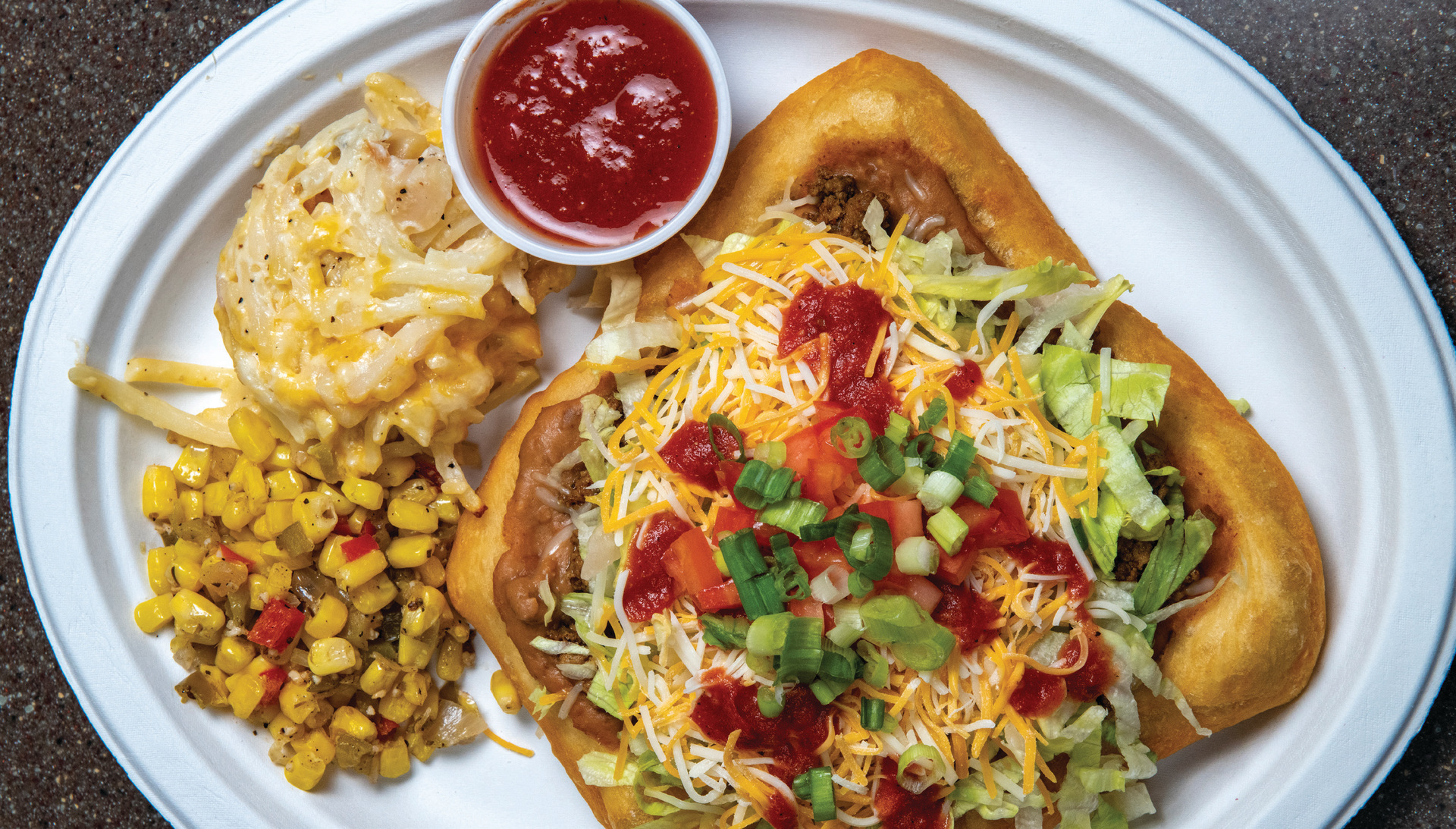 Fry bread, flavor and family tradition are on the menu in Willard

The shutdown surrounding COVID-19 posed a significant challenge to small businesses, especially for a restaurant that just reopened its doors six months prior. For Linda Moody-Ivey, the owner of Momma Mary’s Navajo Tacos, it wasn’t the first time she had to pivot her business. And it wasn’t the first time her customers followed. From the first brick-and-mortar location on West Bypass in Springfield to a food truck at the SGF Mobile Food Park to a new location in Willard, diners couldn’t stay away from family recipes and unique flavors for long — even during a pandemic.

The staple of the menu at Momma Mary’s is Navajo-style fry bread, made from flour, salt and water. The recipe dates back to the one Linda’s mother, the restaurant’s namesake, learned to make while she and her late husband, David, were working as missionaries on a Navajo reservation in northern New Mexico. The restaurant’s menu is derived from classic Mexican dishes, many of which use fry bread as their base, including the house-favorite Navajo Taco.

“I tell everybody, ‘we build it like a pizza, but it tastes like a taco,’” Linda says. “All the recipes are either the way Grandma made it, Momma made it or have pretty much been in the family.”

In the kitchen, Tim Moody, Linda’s brother and only half-jokingly self-described “Fry Bread Master” smiles as he prepares the day’s fry bread, the same way Mary learned to in the ’60s. His hands are a blur as he cuts chunks of the dough from a sheet and quickly form each into rough circles. Thick edges let the bread hold its shape as it cooks, while the paper-thin middle helps the whole piece cook in a turkey fryer. When finished, the fry bread is piled with ingredients, which on a traditional No. 4 include refried beans, meat — seasoned ground beef or Southwest Chicken — lettuce, cheese, green onions, tomatoes and homemade salsa. Diners also may request a side of sour cream, jalapenos or a drizzle of queso or buffalo-maple sauce.

Momma Mary’s offers unique dishes to suit any palate including, Momma Mary’s Big Burrito, Buffalo Bites, Navajo Hamburger and Grape Dumplings. Entrees and homemade side dishes, such as Linda’s Cherokee Corn Succotash, all have origins in family recipes.“It’s more of a down-home style cooking,” Linda says. “Even though it has a Mexican flavor, the fry bread is like something you’ve never had. It’s not like Naan bread or tortillas. It has its own flavor that lends to the overall taste.”

Instead of chips and salsa for an appetizer, diners can receive an introduction to fry bread with Buffalo Bites. A heaping mound of dumpling-sized balls of fry bread are served with a trio of sauces including honey, buffalo-maple and salsa. The appetizer is a great way to sample Momma Mary’s staple food and get a preview of the entree and dessert option flavors. “Usually after somebody tries it, we’ve got them hooked,” Linda adds. Not surprisingly, the Navajo Taco is the most popular dish and the one most first-timers order. If you’re in the mood for a more traditional taco or looking for a gluten-free menu item, try the nachos or the Papoose Tacos, which are smaller tacos served in crunchy corn tortillas. Aztec Tacos also feature corn tortillas — four soft shells — grilled and stuffed with beef or chicken. 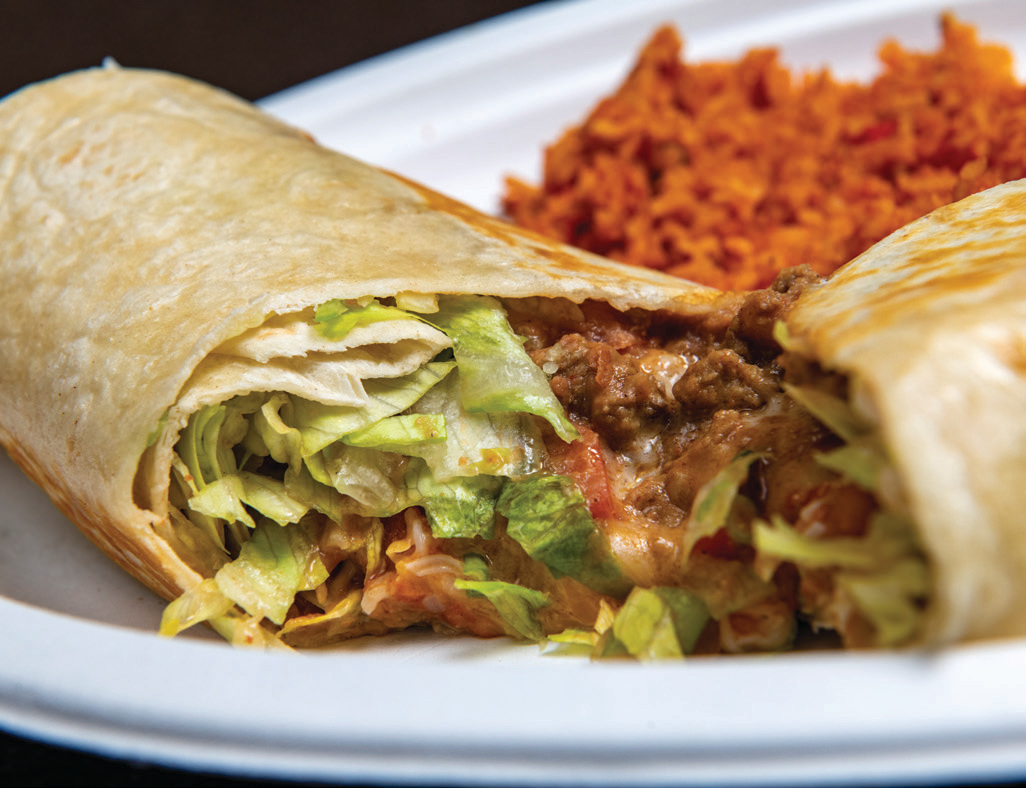 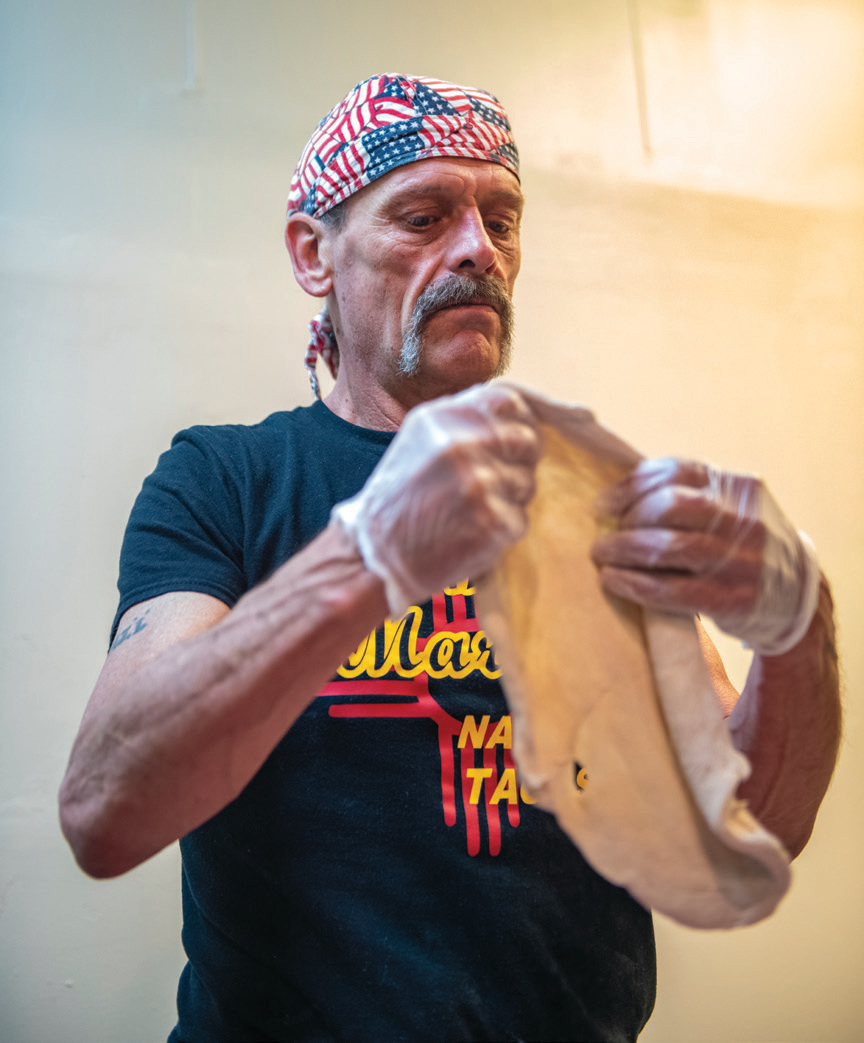 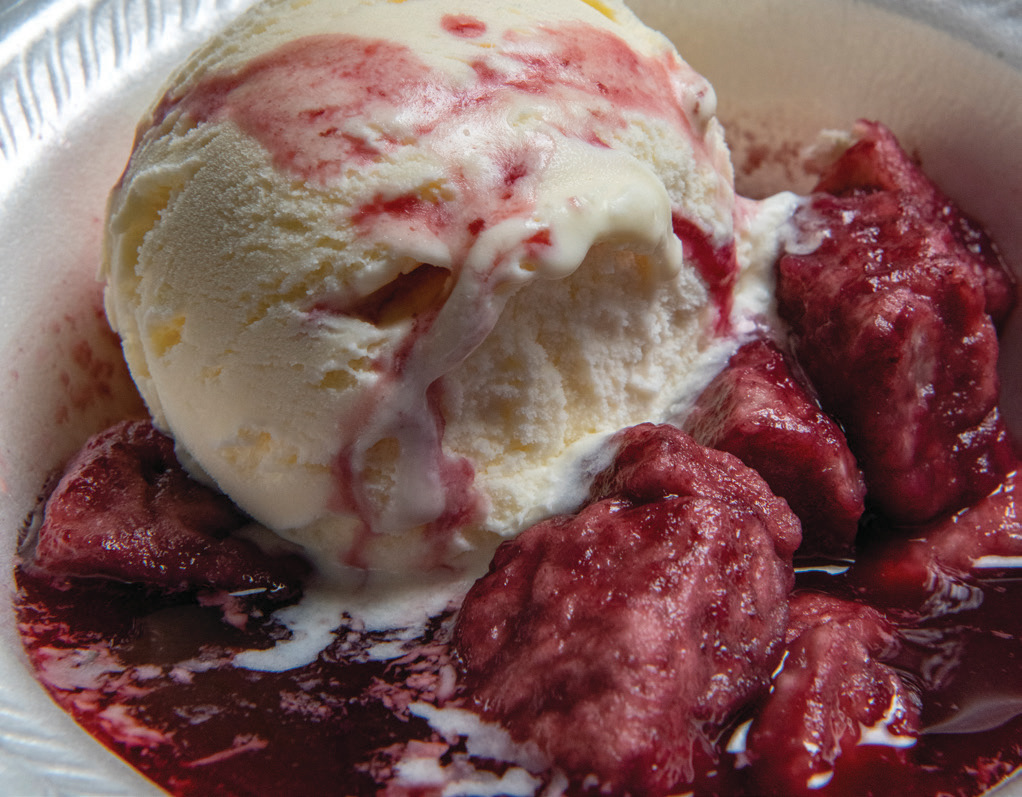 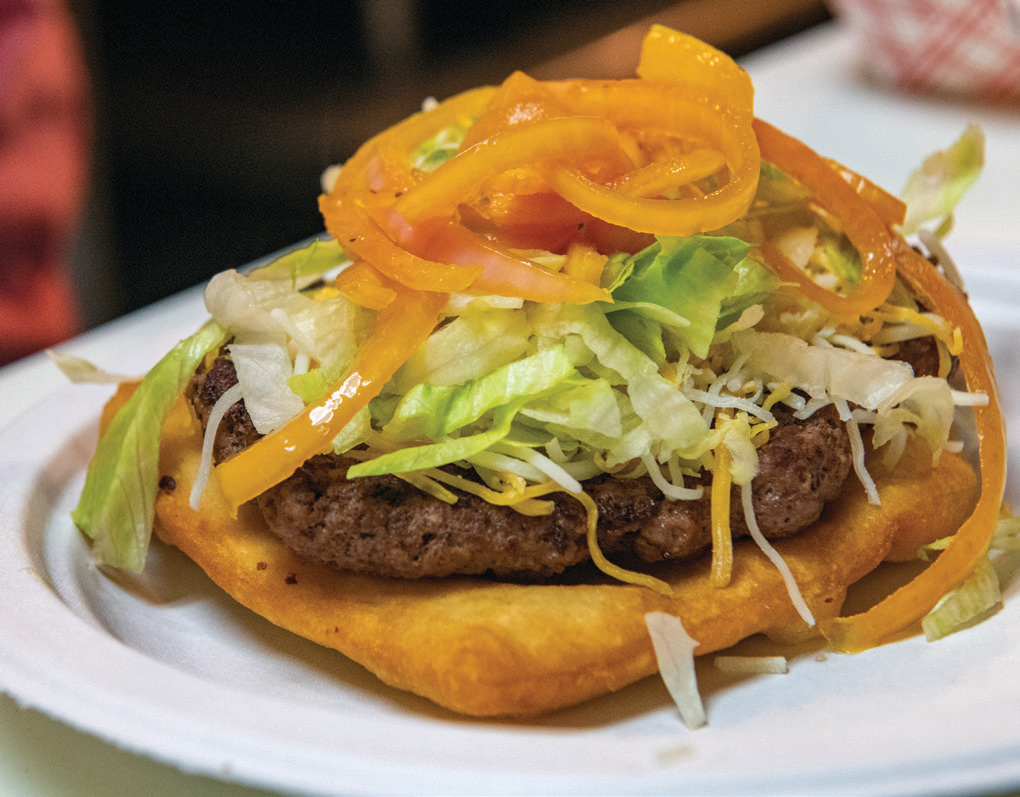 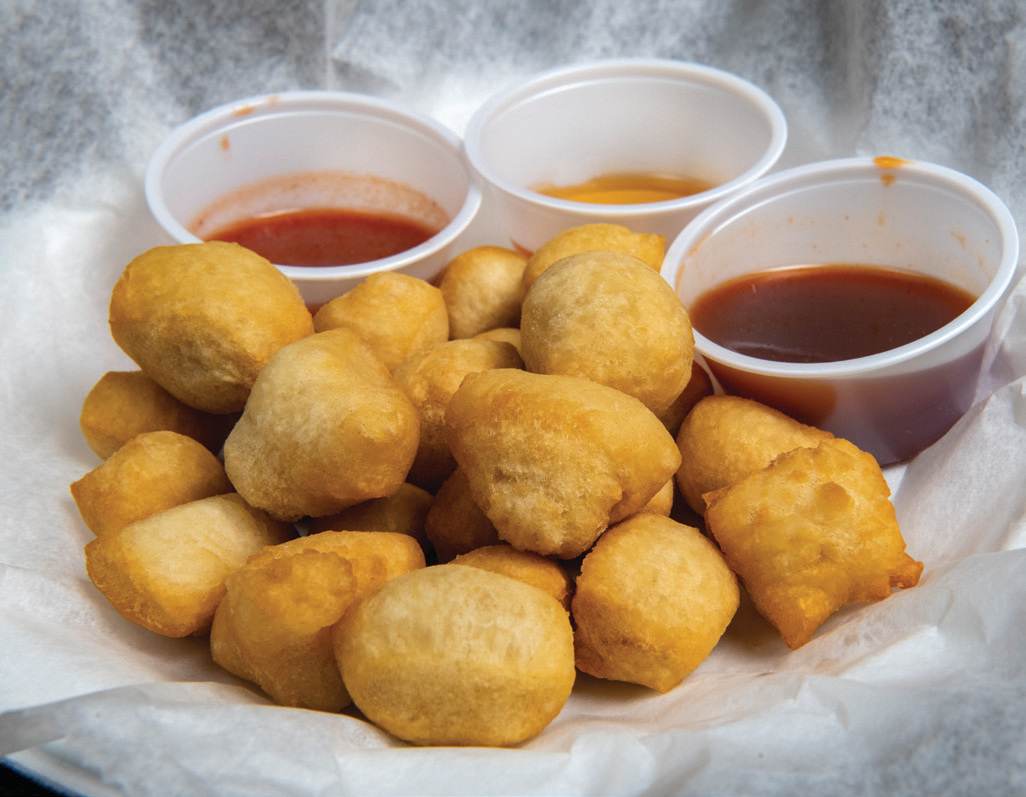 If tacos aren’t your style, Momma Mary’s still has you covered. Momma Mary’s Big Burrito, a hulking flour tortilla stuffed with the same taco toppings, is grilled on both sides to give it a crisp edge. Side items include refried beans and Spanish rice. Linda also makes hash brown casserole and Cherokee Corn Succotash, the latter comprising a medley of fresh peppers, onions and corn, and named after the Moody family’s own Native American ancestry. Or you can choose to double down on fry bread with the Navajo Hamburger. A quarter-pound, all-beef patty sprinkled with special seasoning is grilled and served on a fry bread bun covered in a bed of lettuce and cheese. The patty is then topped with Linda’s homemade pickled onions and another fry bread bun spread with sour cream and tomatoes.

“I try not to compete with the Mexican restaurants,” Linda says. “I wanted to be a different genre. I believe with our menu we’ve done that.”

If you managed to save room for dessert, you’re in for a tough choice. The Arizona Sopapilla — fry bread mixed with cinnamon sugar and drizzled with honey — is a sweet treat that’s hard to beat. Linda also offers Delight, similar to a donut and topped with cream cheese, strawberry jam and powdered sugar, and her father’s favorite, Peanut Butter Fluff, made from marshmallow cream and peanut butter drizzled with chocolate. There’s also the Mudpie, described by Linda as “death by chocolate.”

Arrive on Tuesday and the choice is made simpler, not by a reduced number of offerings but by the tantalizing smell coming from the kitchen. That’s when Linda whips up her take on a Native American recipe for grape dumplings. In Momma Mary’s version, Linda makes fry bread with flour, salt and grape juice instead of water, and then cooks the dumplings in grape juice. The Buffalo Bite-sized sweet dumplings are bursting with flavor and served in a bowl with the thickened sauce and a scoop of vanilla ice cream, also drizzled in grape sauce. Linda says during the food truck days the dumplings were a crowd favorite at local powwows and other cultural understanding events. They’re no less popular in Willard, where she finds herself whipping up another batch of fry bread to keep up with orders going out the door.

Although the restaurant can only seat about half the pre-COVID capacity of 86 due to safety protocols, takeout orders for tacos, burritos, burgers and more help make up for the reduced capacity.

“I’ve been really humbled,” Linda says of the community’s response and patronage during the pandemic. “I’ve always said, ‘I don’t need to be rich. I just need to make a living and support my employees.’ We’re building back every single month, and we’re excited with what the future is going to bring.”