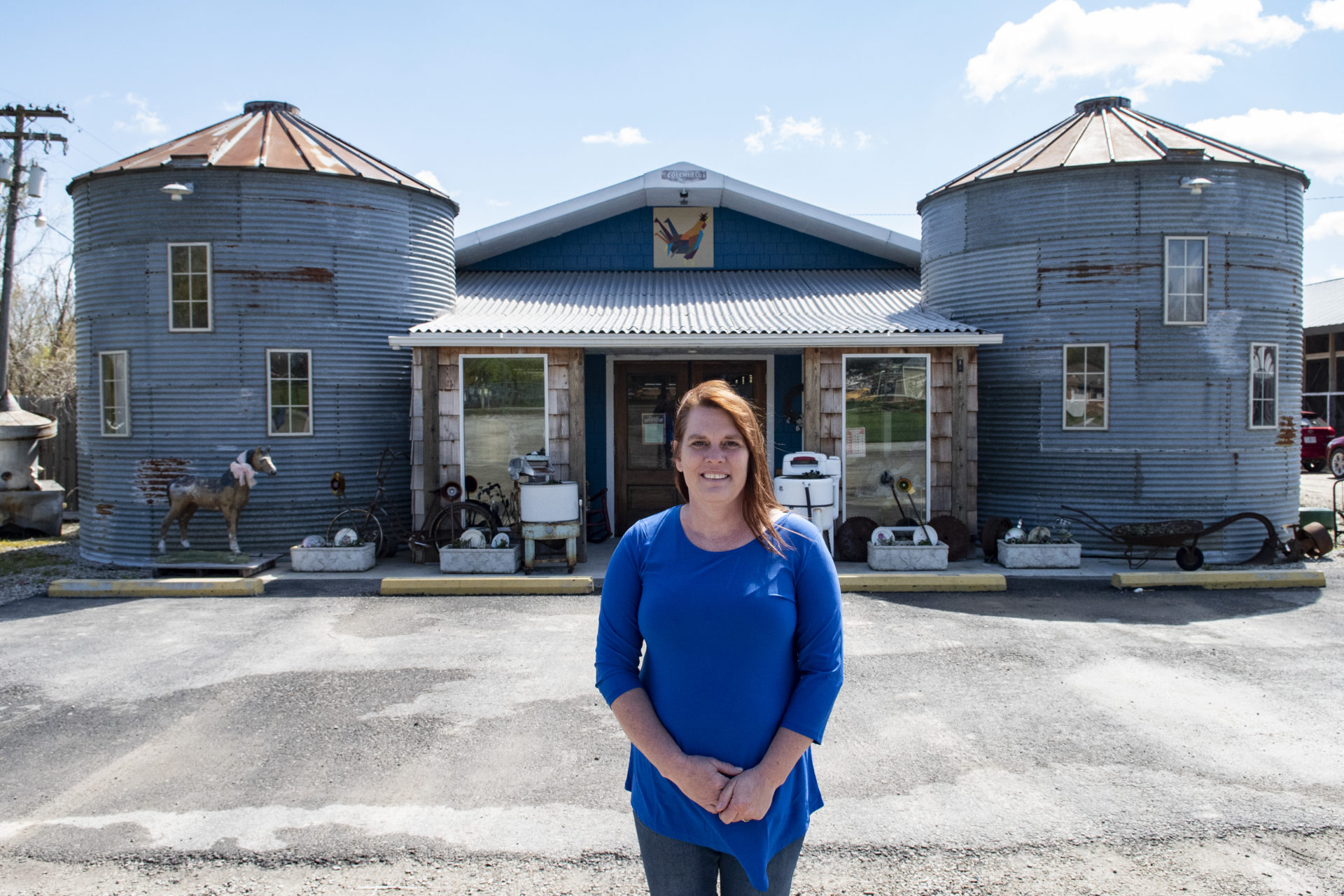 When Noel and Chris Clayton first drove past the building that once was home to Triangle Lumber in Adrian the wheels started turning in their minds. “My husband said, ‘you can really do something cool with that,’ ” Noel recalls. “It had been on the market, but we thought we just don’t have the time right now or we don’t have the money now. And then it finally all came into alignment and we bought it in February 2018.”

It took them six dumpsters and close to a year of work to haul off the debris left behind by a string of previous owners. But when they were finished they opened one of Missouri’s most unusual antique stores.

What sets the store apart are the two grain bins repurposed and nicely tied into the store’s décor. One is decorated as a comfortable living room while the other — painted with two circular American flags — holds Americana items for sale. “The way grain bins are put together, you do the roof and then you lift it up and add a ring. People in town said it looks like they are growing. Well, they were growing,” Noel says.

The idea behind the grain bins and a host of other repurposed materials used in the remodeling is to show the value in finding new uses for cast-off items. That philosophy began at the house the Claytons built north of Adrian, which is served by Osage Valley Electric Cooperative.

The footings for the unusual home used 400 worn-out tires. Everything else came from Craigslist purchases, surplus building material auctions or leftovers from construction jobs Chris worked. Part of the house is formed from two recycled grain bins.

“We did all that and then we carried it over here,” Noel says of the store. “These are from a picket fence that we cut apart and used for the walls. The shutters came from a mansion outside Kansas City. This ceiling tin in the front entry came from an old hotel in Garnett, Kansas.”

Barn wood that panels the interior walls came from a nearby tumbled down barn. Then there are the many doors that display items for sale and also line the stairs and the upstairs walls.

“We ran across a guy in Warrensburg that demolished an apartment complex off the plaza in Kansas City,” Noel says. “He had about 150 doors. At this point he wanted to sell them all at one time. And my husband was like, ‘OK.’ So we went to Warrensburg and got a bunch of doors.”

Even the name is repurposed, sort of, from a blog the family does called “Recycled Homesteading.”

Everywhere you look, yet another creative idea from Chris and the couple’s son, Hunter, can be found. “He is pretty amazing,” Noel says of her husband. “He sees something and says, ‘I am going to make this out of it.’ I just go ‘OK, how can I help you?’ ”

In the bathroom the base from a treadle sewing machine holds up a country sink. One wall is lined with old receipts from Triangle Lumber. A local man spotted a receipt dated October 1971. It was one of the first purchases he made after returning home from Vietnam and starting a construction company. 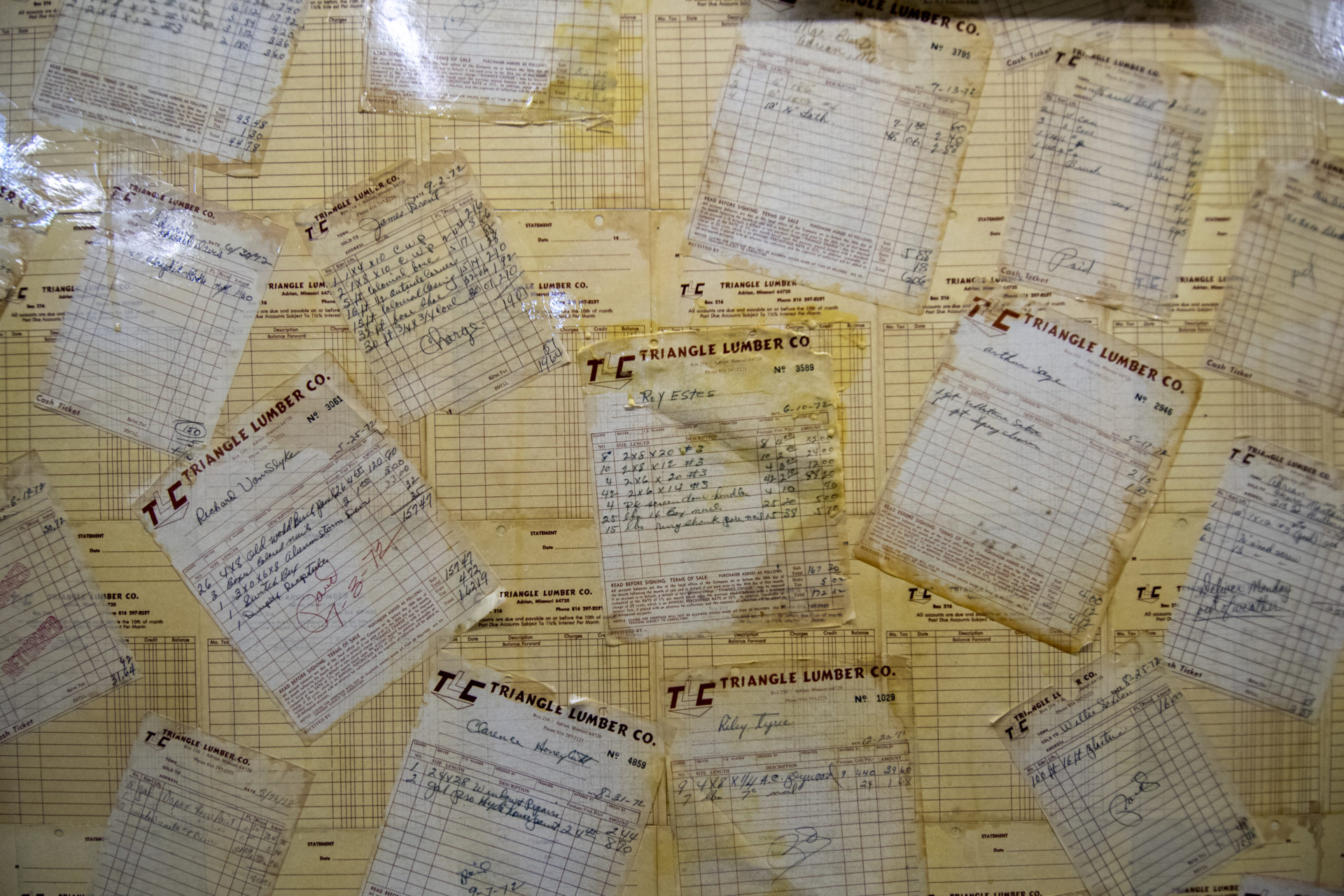 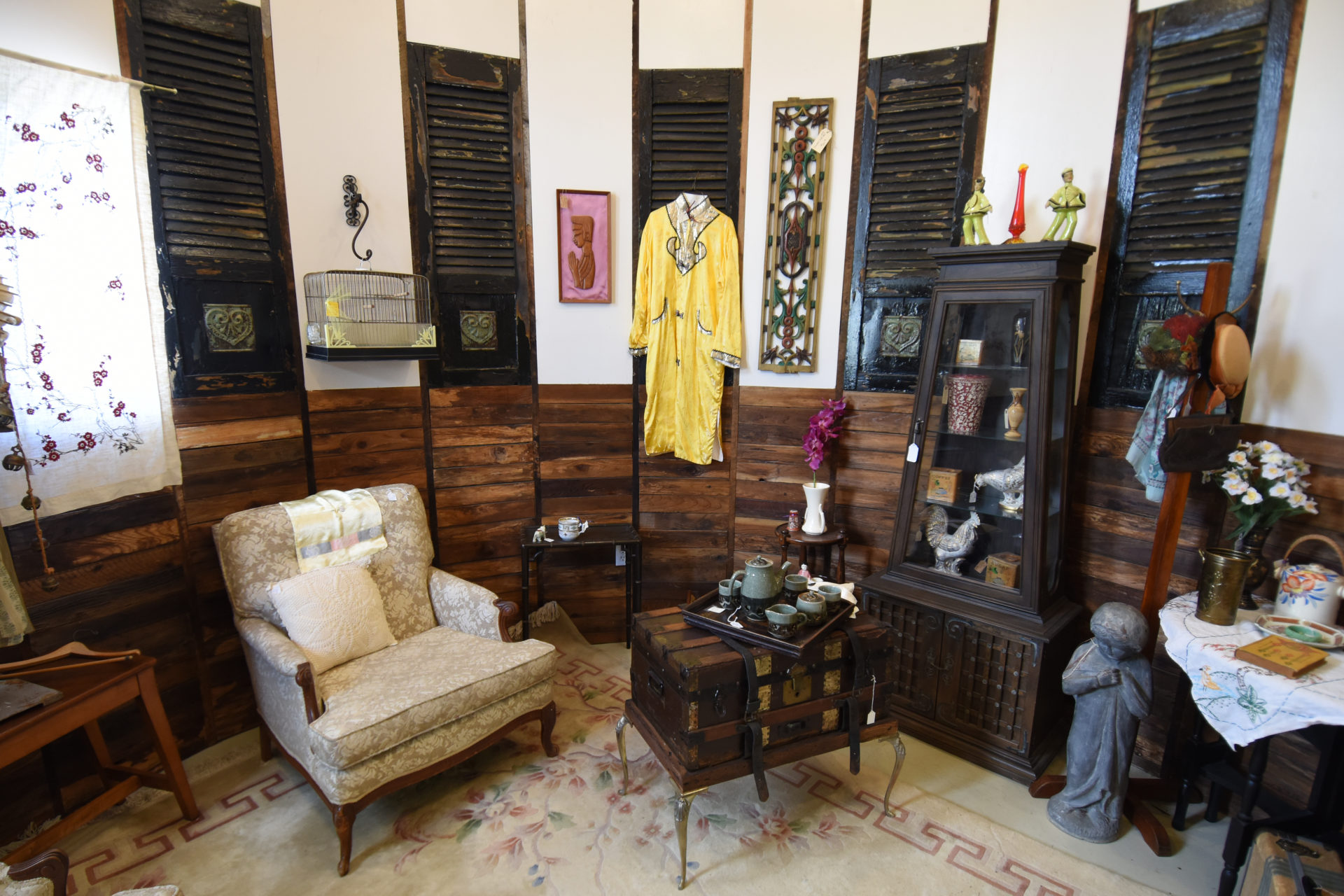 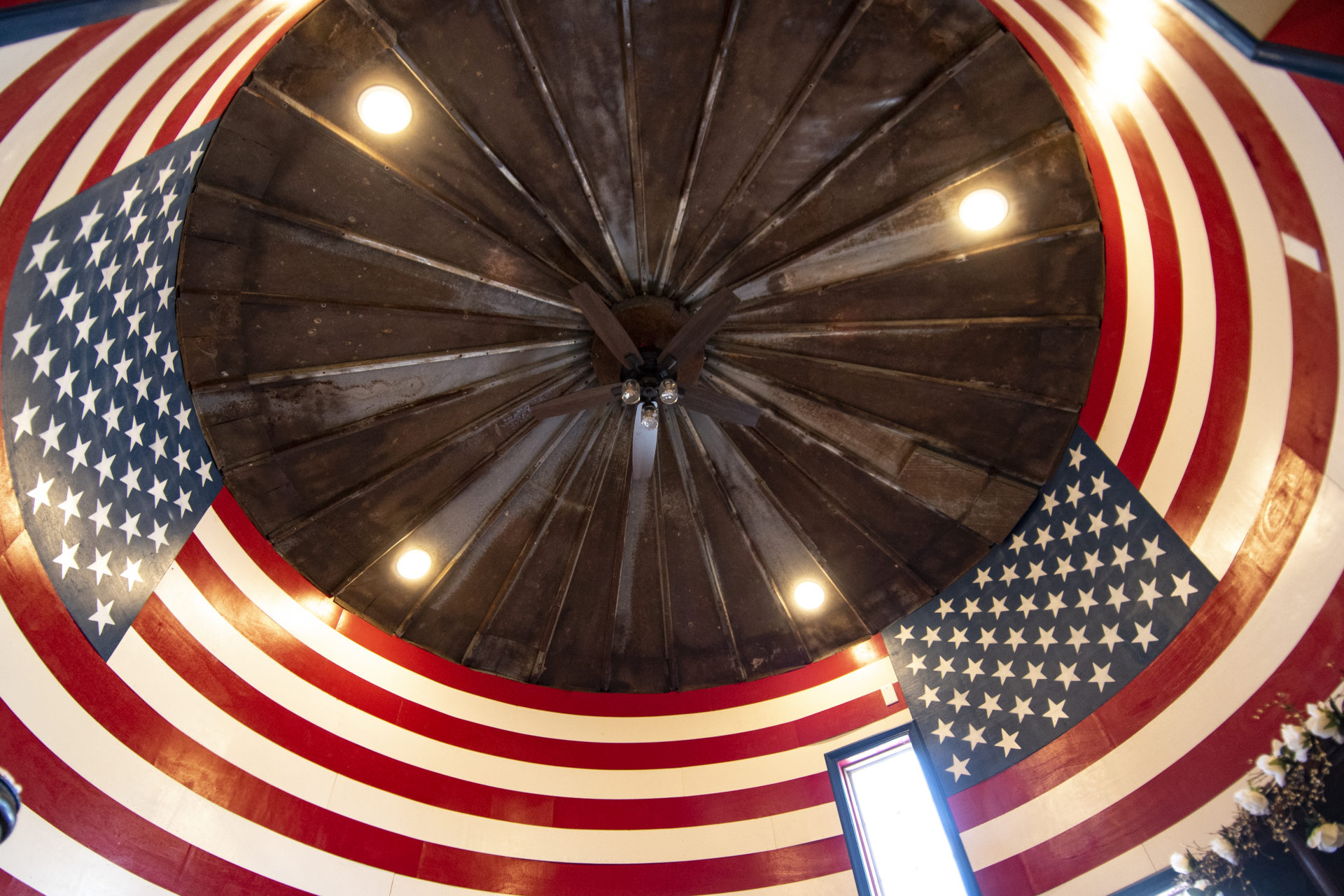 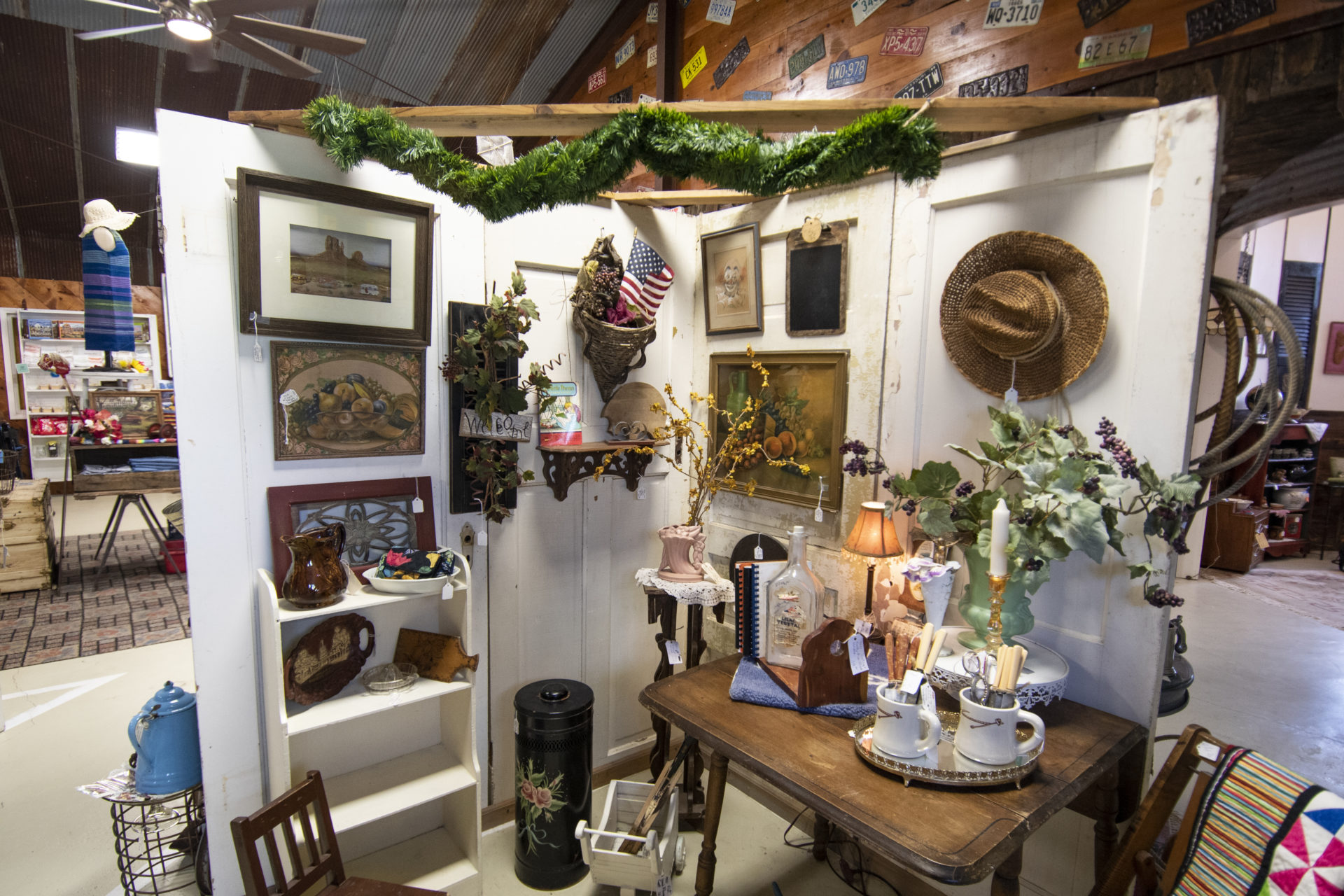 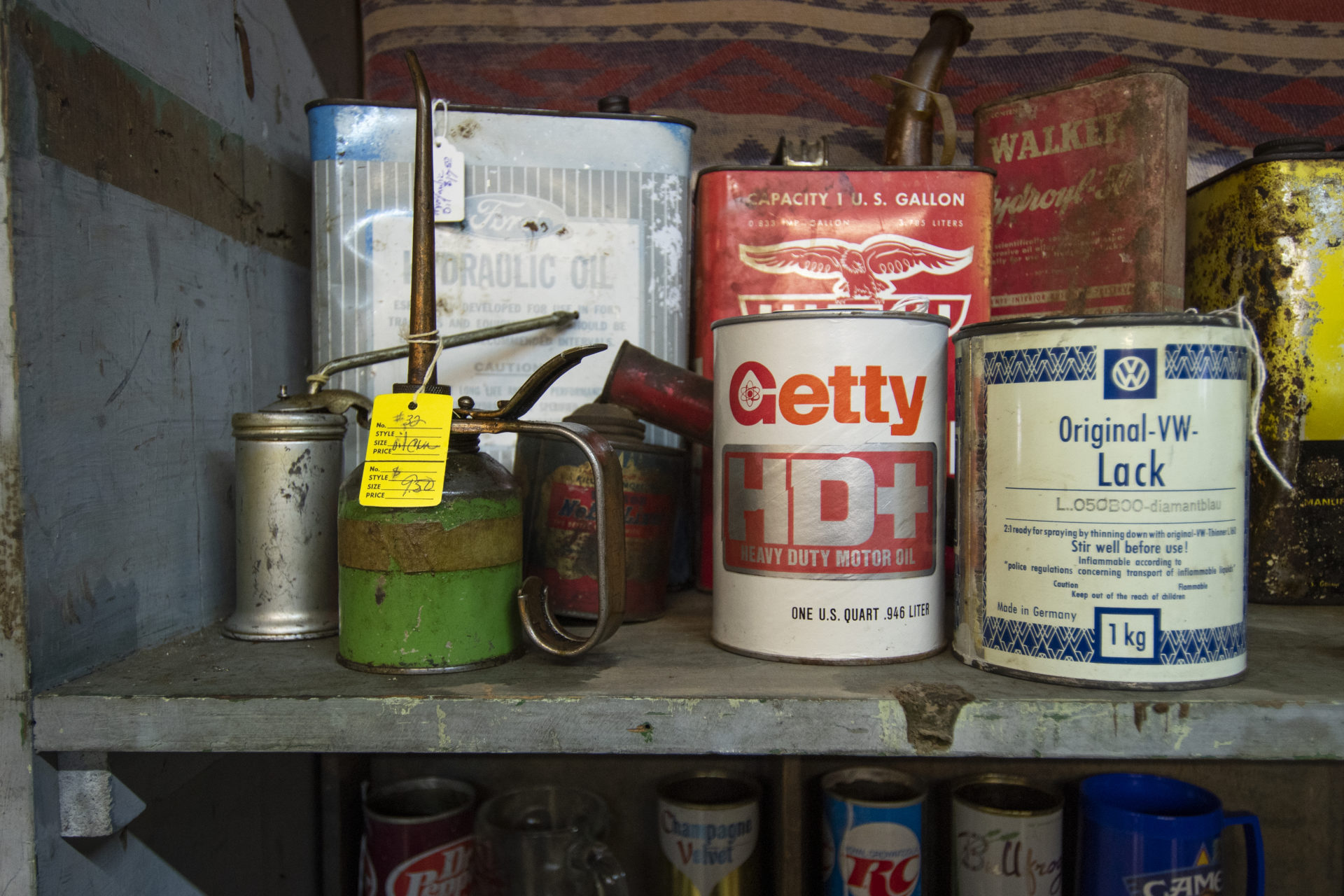 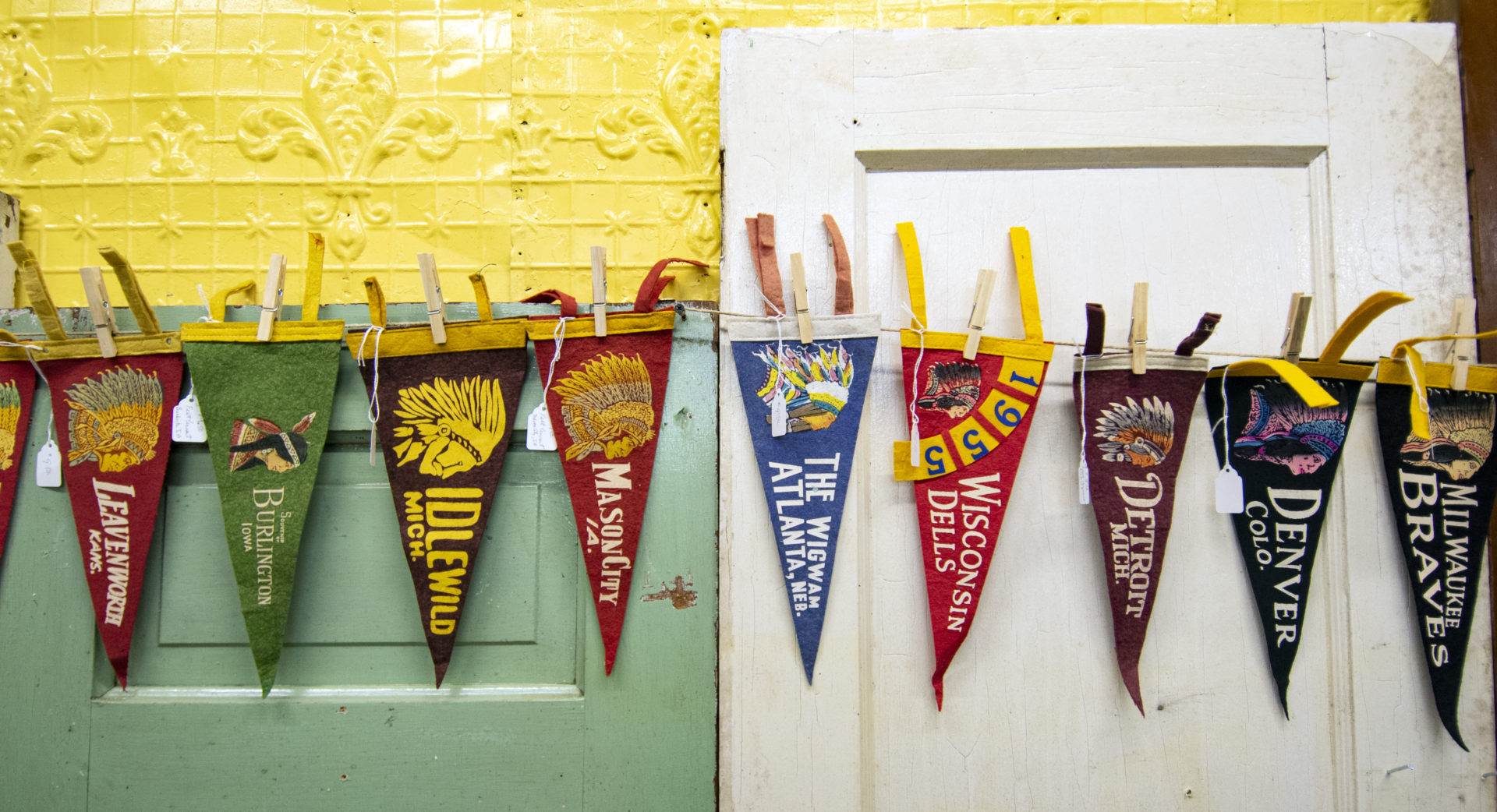 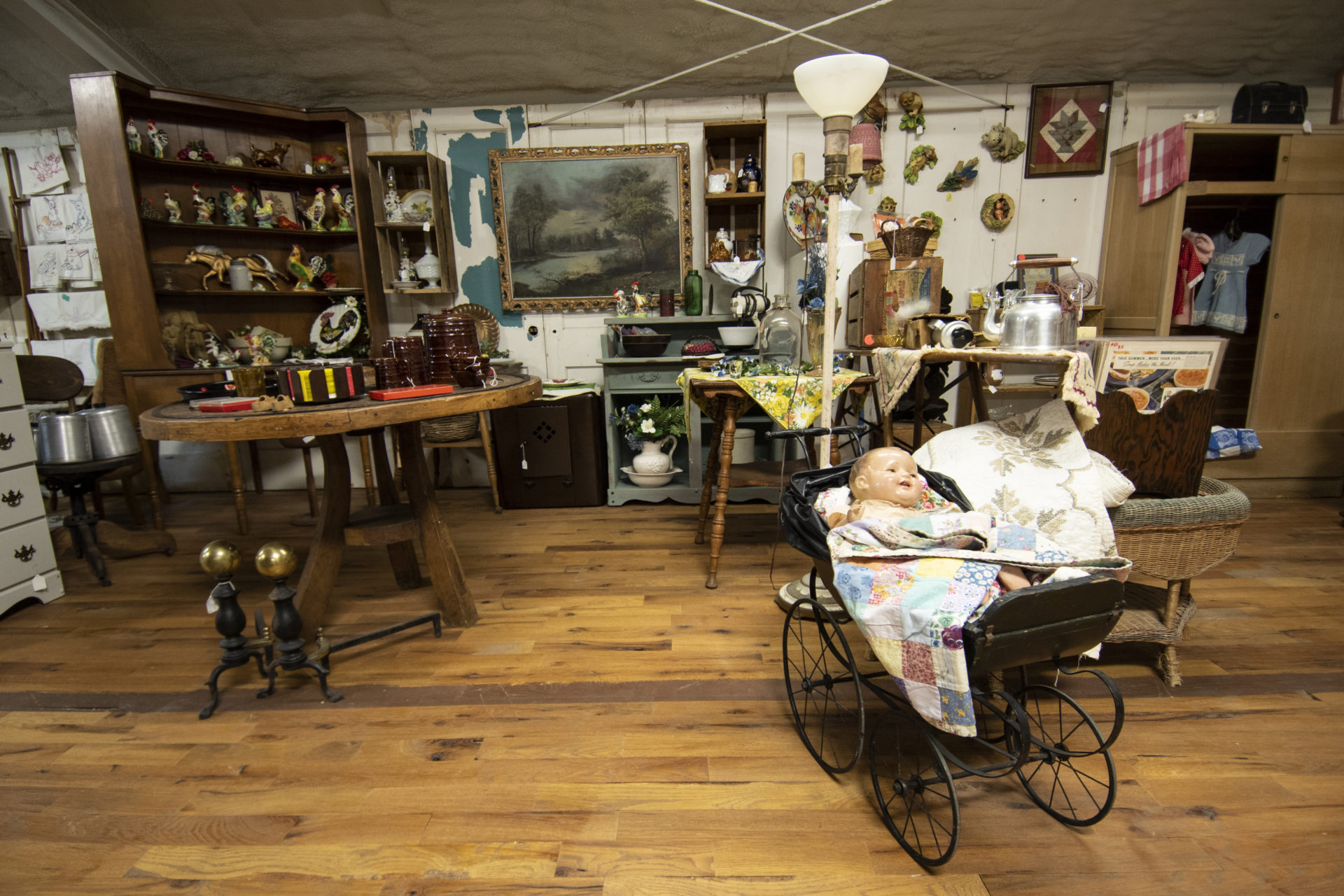 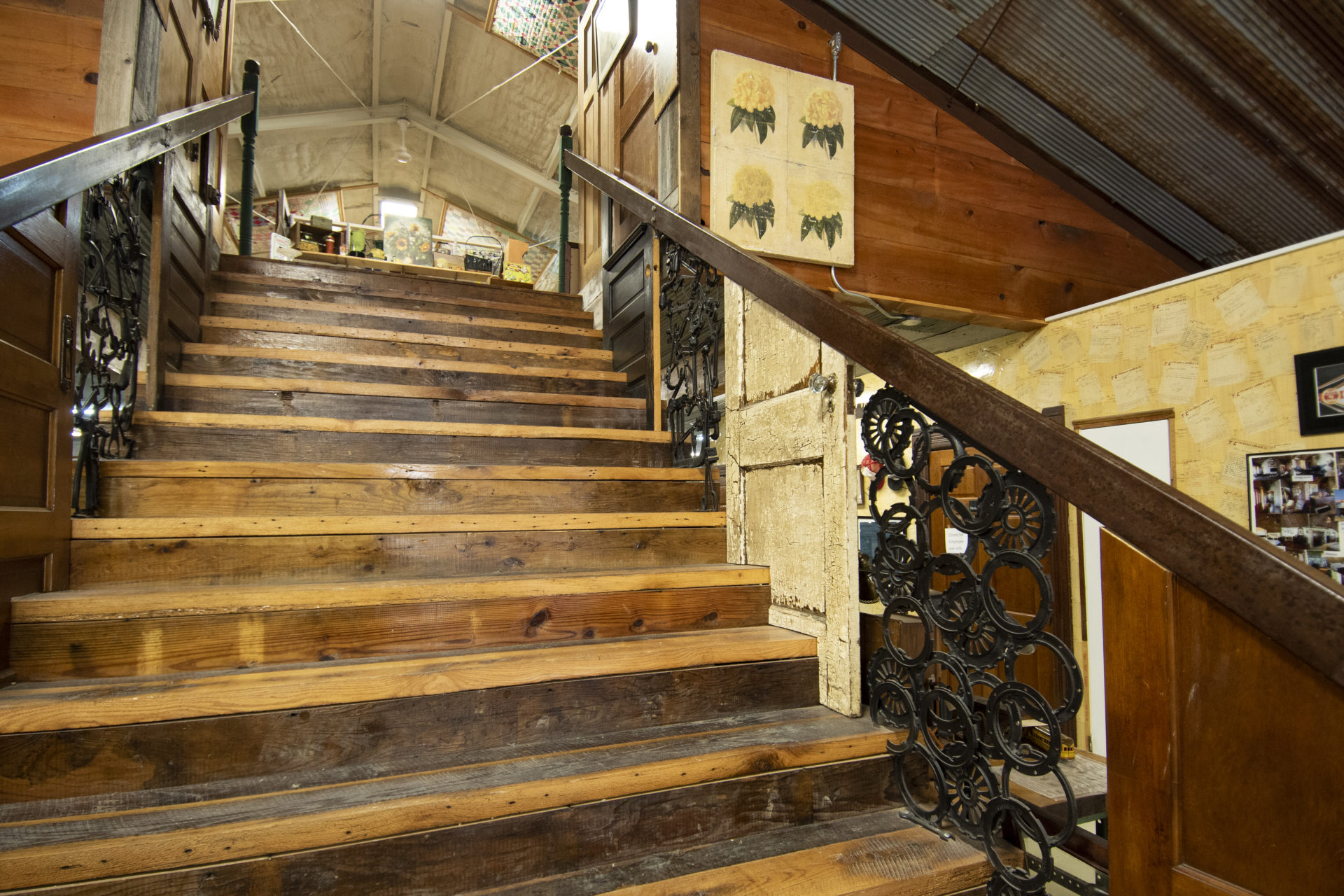 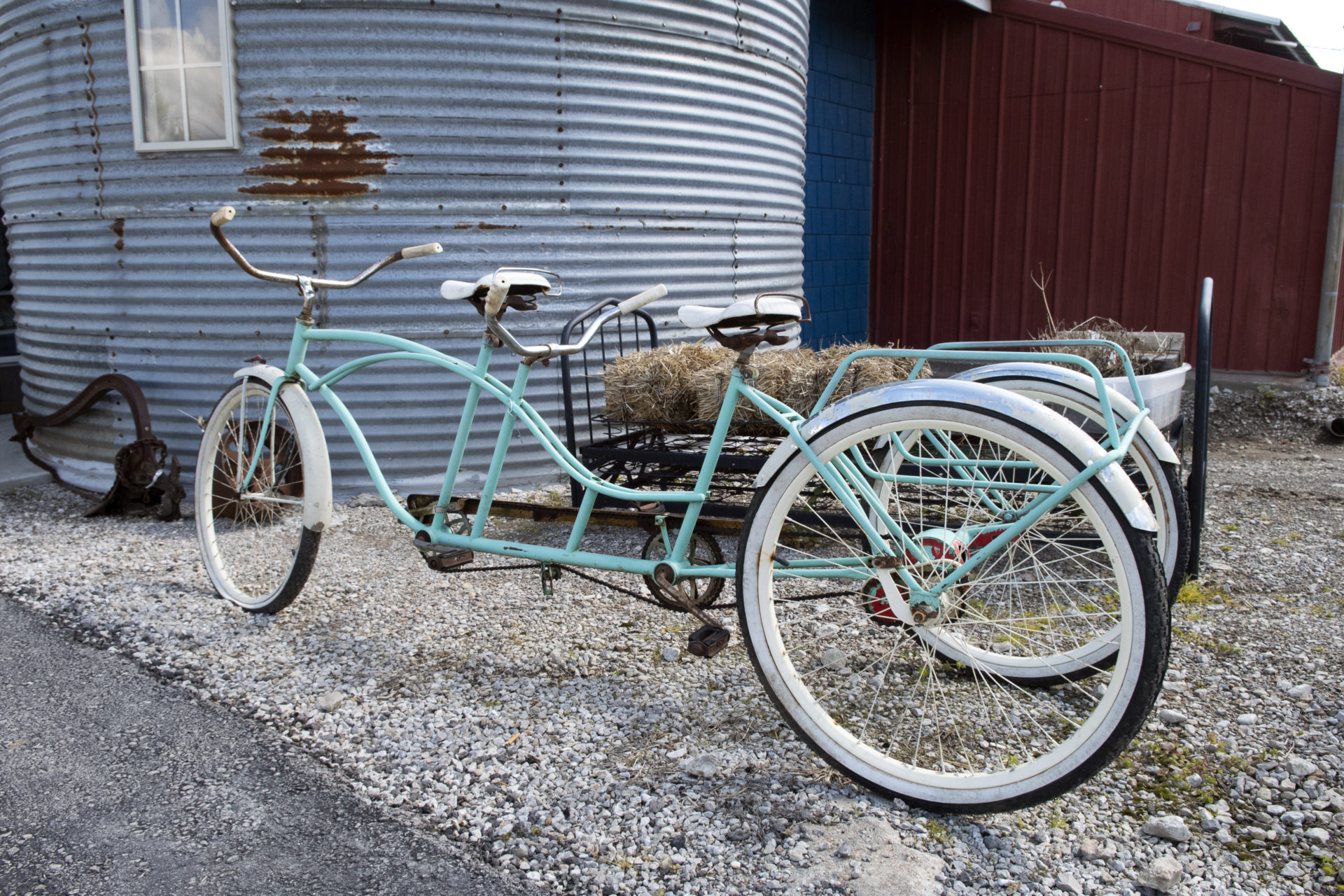 Another wall is papered with old maps Noel’s grandparents saved from their many trips. Customers like to look for their own hometowns on the maps.

“That was kind of our purpose, to show people that there is stuff everywhere that still has value,” Noel says. “It’s not all scrap metal. You can make stuff that is real pretty with it. You can definitely repurpose it into something else.”

The design lends itself well to the hundreds of items on sale by 64 vendors. While every day brings something different through the doors, you might find tools, dolls, antique signs, vintage clothing and no end of retro appliances. Some vendors sell handmade knives, while others deal in repurposed barnwood signs or wallhangings crafted from cast-off textiles.

One item for sale there used a well pulley to suspend two buckets for planting flowers. Visitors couldn’t miss the one-of-a-kind tandem, three-wheel bicycle parked outside the front door.

“More times than not, people buy memories, things that bring them comfort,” Noel says. “They remember having it as a kid, or remember their grandma having it. We ask them if they are looking for anything in particular and they say no. When you are walking through there’s a lot of people who see something that sparks a memory for them.”

That was the case for one man who entered the store, spotted a ceramic elephant and got tears in his eyes. The little elephant was the same as one his mother had years ago that was broken by his sister. “Everything just came back,” Noel says. “So he had to buy it. He said he was going to give it to his sister for Christmas.”

Besides being open seven days a week and on some holidays, the store hosts outdoor flea markets that include food trucks, music and more. In September a car show helps raise money for Special Olympics, a program the Clayton’s youngest daughter, Abi, participates in.

“There’s just so much history behind this place,” Noel says. “It’s fun to learn, even if you just pick something up and say ‘I love this because it looks like this.’ But then you start researching it and learn what it was used for and then you know the history of something you never knew about.”