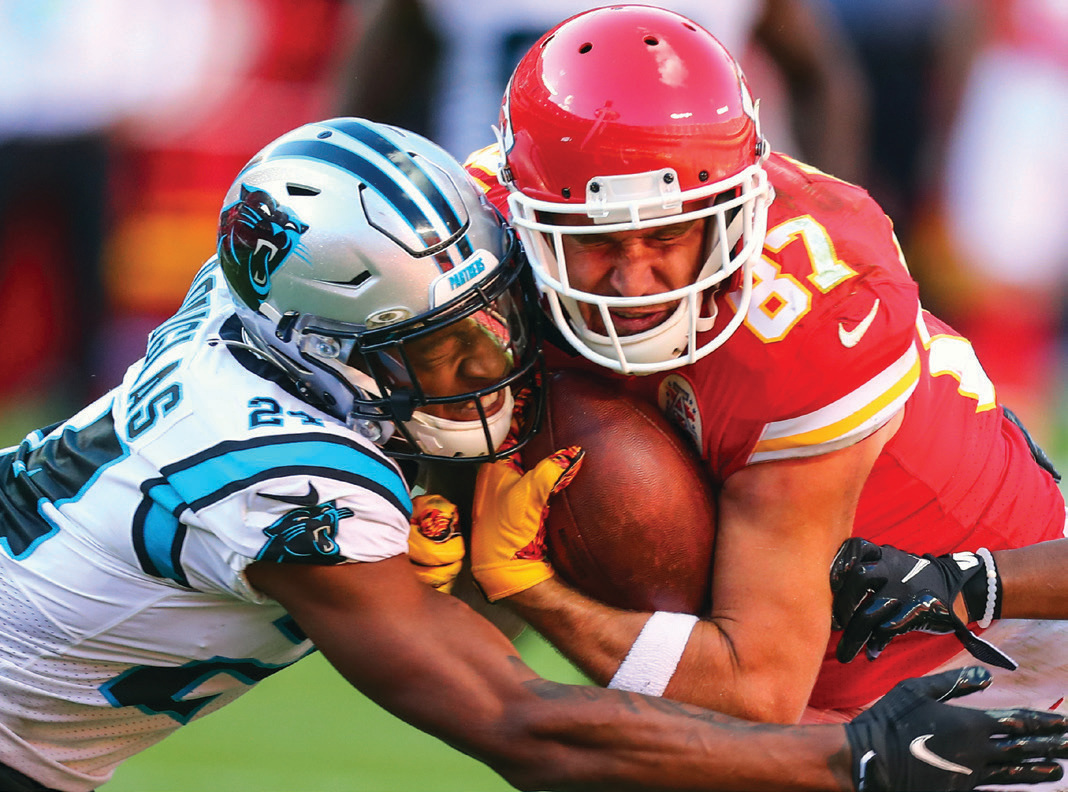 You never know where the road of life will take you. Kearney’s Andrew Mather can attest to that. He says it all started when he was given a Pentax K1000 film camera for Christmas in his junior year of high school. He took an entry-level photo class to learn the basics of using the camera … and discovered he loved taking photos.

Flash forward to Feb. 7, when the 31-year-old photographer found himself on the sidelines once again as the Kansas City Chiefs played in their second straight Super Bowl. For six seasons, Andrew has been a contract photographer with the Chiefs. It’s his job to document every game as part of a team of photographers.

In 2020 Andrew watched through his viewfinder as the Chiefs came from behind to win the championship. “It was electric, that’s the only way I can describe it,” Andrew says of his first Super Bowl experience, which included an opportunity to hoist the Lombardi Trophy himself. “There was so much happiness. So much joy on the field.”

His photo of Chiefs safety Armani Watts pretty much sums up the after effects of being so close to the action during a Super Bowl. The photo shows the player sitting on the field, trying to take it all in while confetti rains down around him.

He learned the skills required of an NFL sports photographer while earning a bachelor’s and master’s degree at the University of Central Missouri. One of his classes required shooting sports. “Originally I just liked shooting nature and scenics. I got a press pass from the athletic department and started covering a couple games. My stuff wasn’t good at all, but I was having fun with it. It’s a tough learning curve trying to shoot moving subjects compared to everything being still in the frame.”

As he improved, his efforts caught the attention of the campus photographer who offered him a job. Before long the Platte-Clay Electric Cooperative member was a regular at just about every UCM sporting event. When graduation came, he applied for an internship with the Chiefs. While most of the applicants only showed off their action photos, Andrew’s well-rounded portfolio stood out. 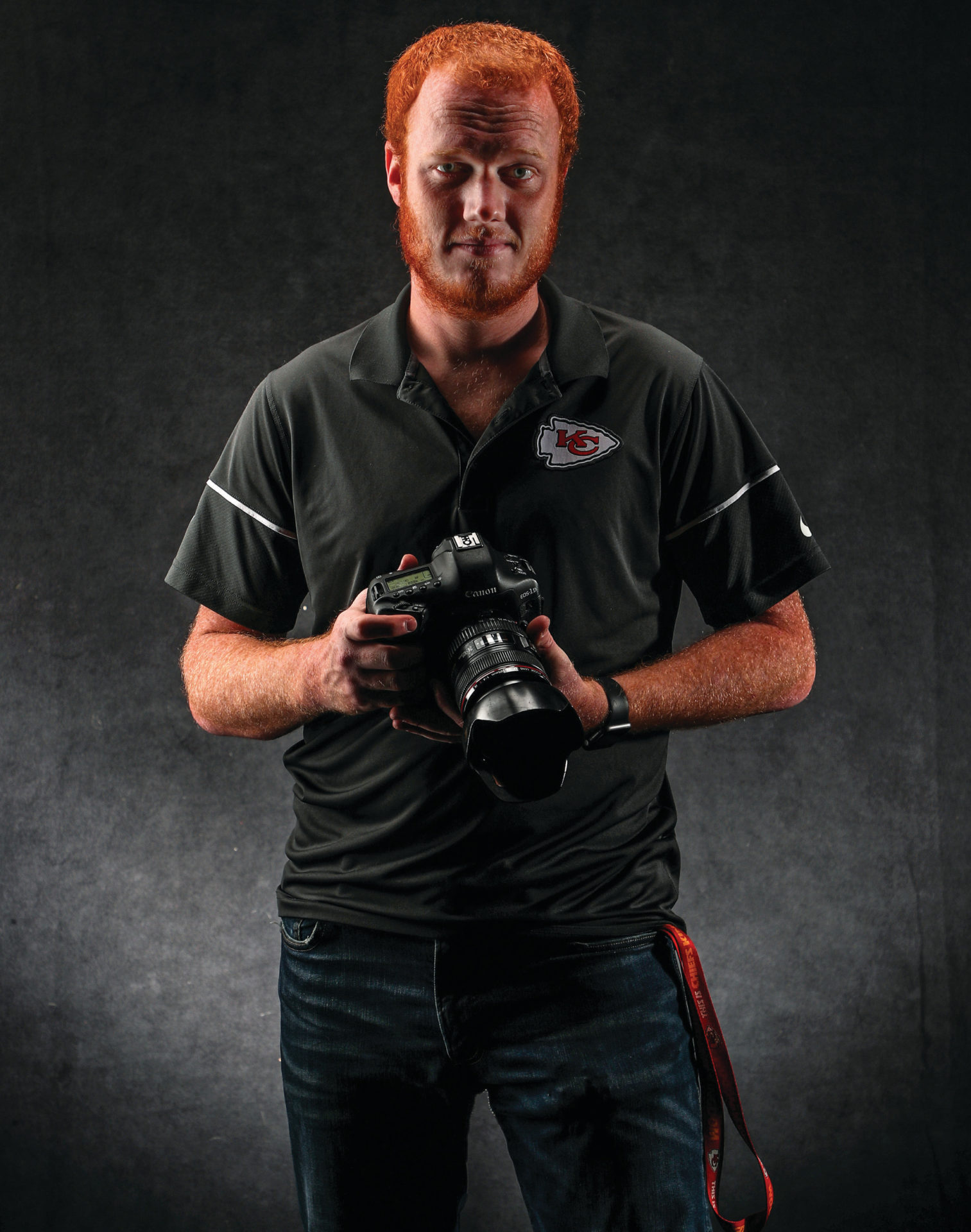 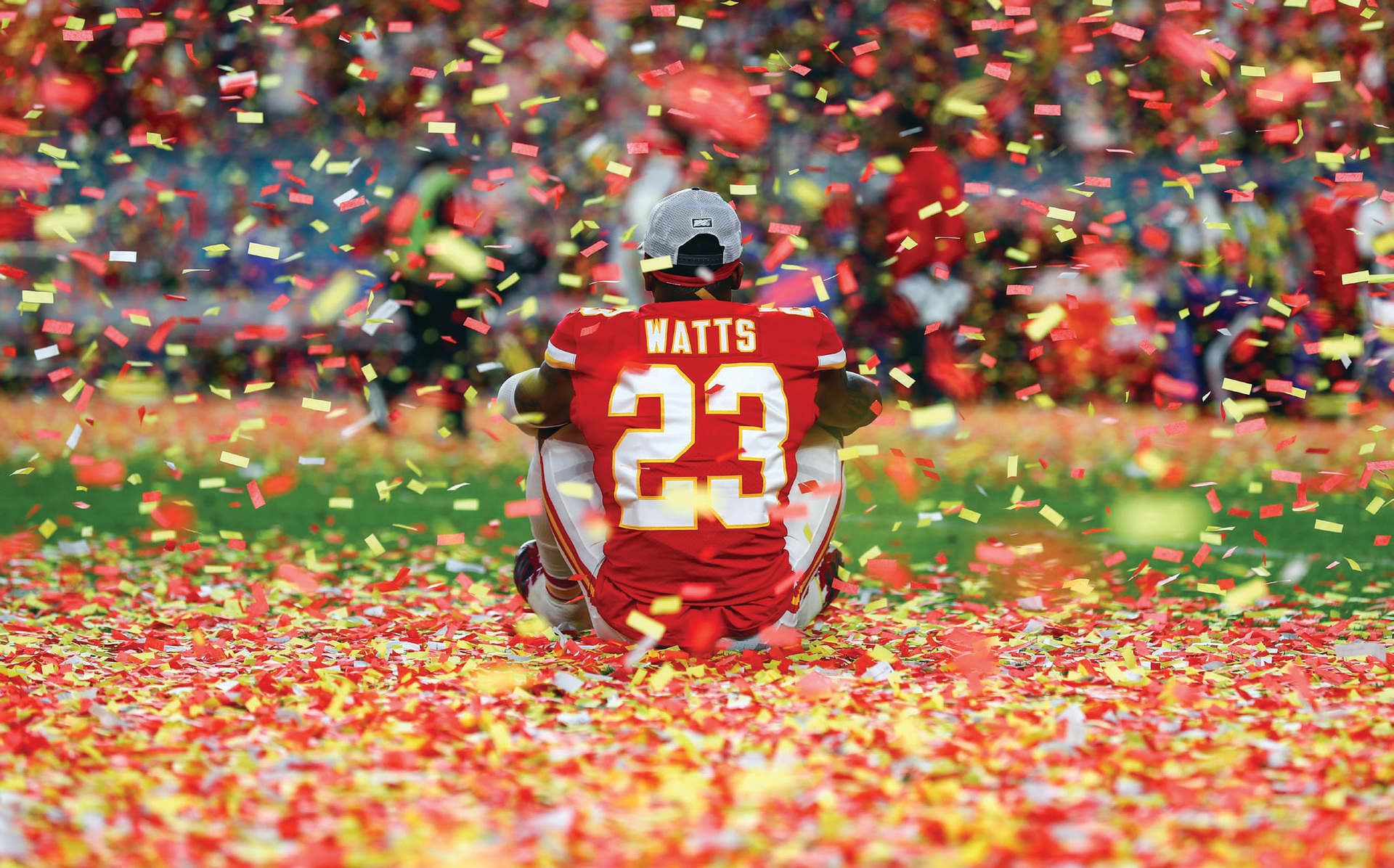 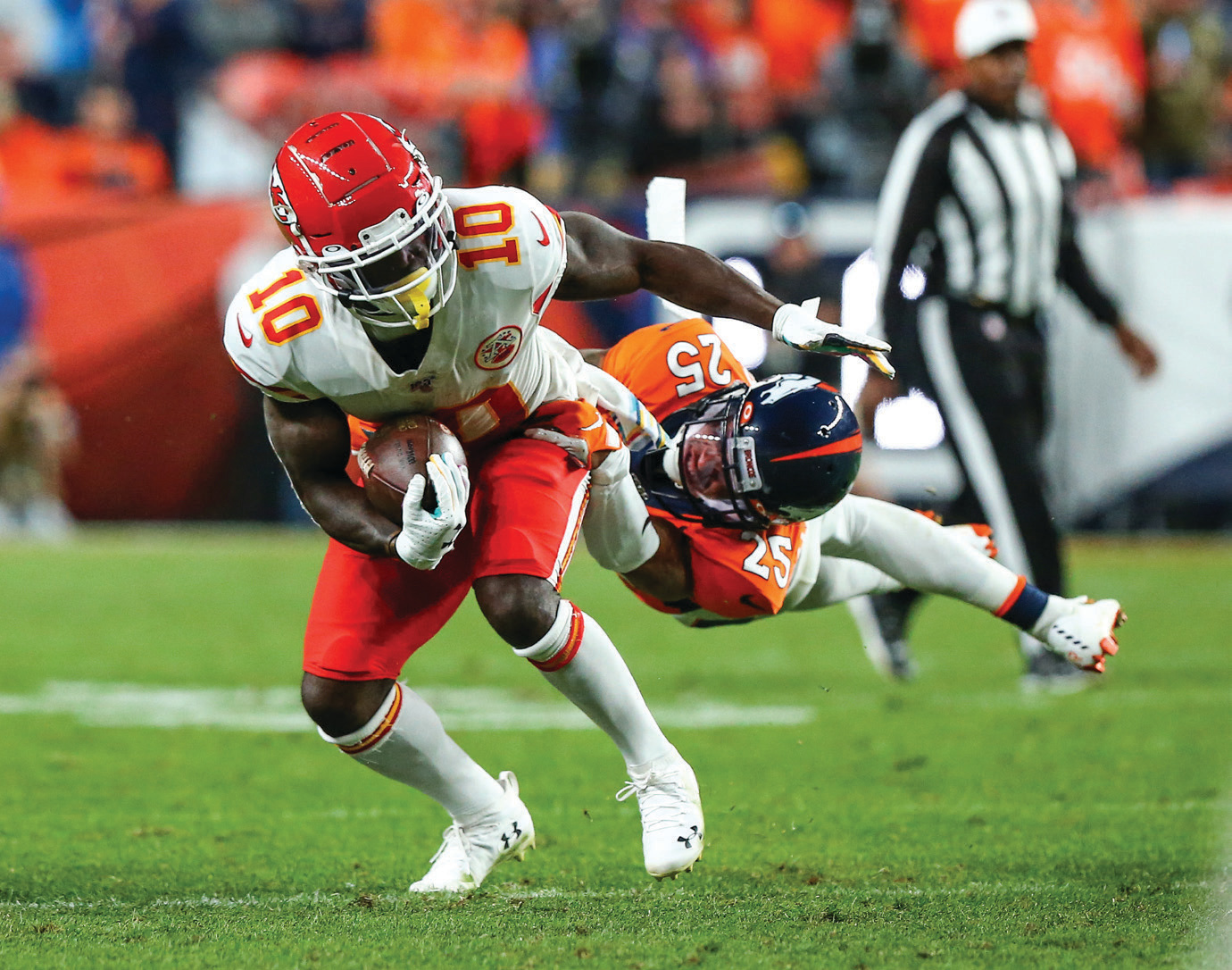 “I never in a million years thought I would be working in pro sports,” Andrew says. “I was perfectly happy if I would just get a college sports job.”

He says the challenges of shooting on the pro level compared to his college days are night-and-day different. Kansas City’s Arrowhead Stadium is known as one of the loudest places on Earth. Andrew cuts out the distractions by wearing noise-cancelling earbuds and tuning in to his own music so that his mind can concentrate on the fast-paced action.

“They hit harder, they run faster,” he says of the NFL players. “I’m using equipment here I never had access to at UCM. I think the longest lens I had at UCM was 300 mm and my go-to lens at Arrowhead is 600.”

That long lens is apparent in Andrew’s work. He likes to zoom in tight on a player’s face, showing the emotion that comes from playing at the highest level. His photos show the impact of the Chief’s defense gang-tackling a running back, Patrick Mahomes narrowly escaping a sack and the excitement of Travis Kelce leaping into the end zone.

“You’re watching the lineups before the snap and just looking at some of the players faces,” he says. “You almost know that they’re probably going to be the target. That’s the good thing about the 600. You can get real close and see their facial expressions. There might have been a little smirk there, so I’ll stay with him. It’s a little bit of luck. Other times it’s almost a gut feeling that works out.”

His favorite photo from the thousands he has snapped came in a 2018 win against the Baltimore Ravens. Quarterback Patrick Mahomes was on the sidelines waiting for that moment when the defense had sealed the victory. “I was literally trained on him for probably a solid 5 minutes while the game was going on,” Andrew recalls. “Most of the other photographers had already moved down the field to where the action was. I kept him in my frame just waiting to see what would happen. He started screaming and cheering and I got a great shot of him. That’s probably my all-time favorite emotional shot.”

“I’ve done a little bit of everything,” he says. “That’s one of the things the team’s head photographer liked about the portfolio I showed him before he hired me. We don’t just shoot sports. The action is a minor part of what we do the entire year in the great scheme of things.”

Given the Chiefs’ recent success, he should find many more great moments for years to come.

You can find contact information for Andrew and see more of his work at www.matherphotos.com.