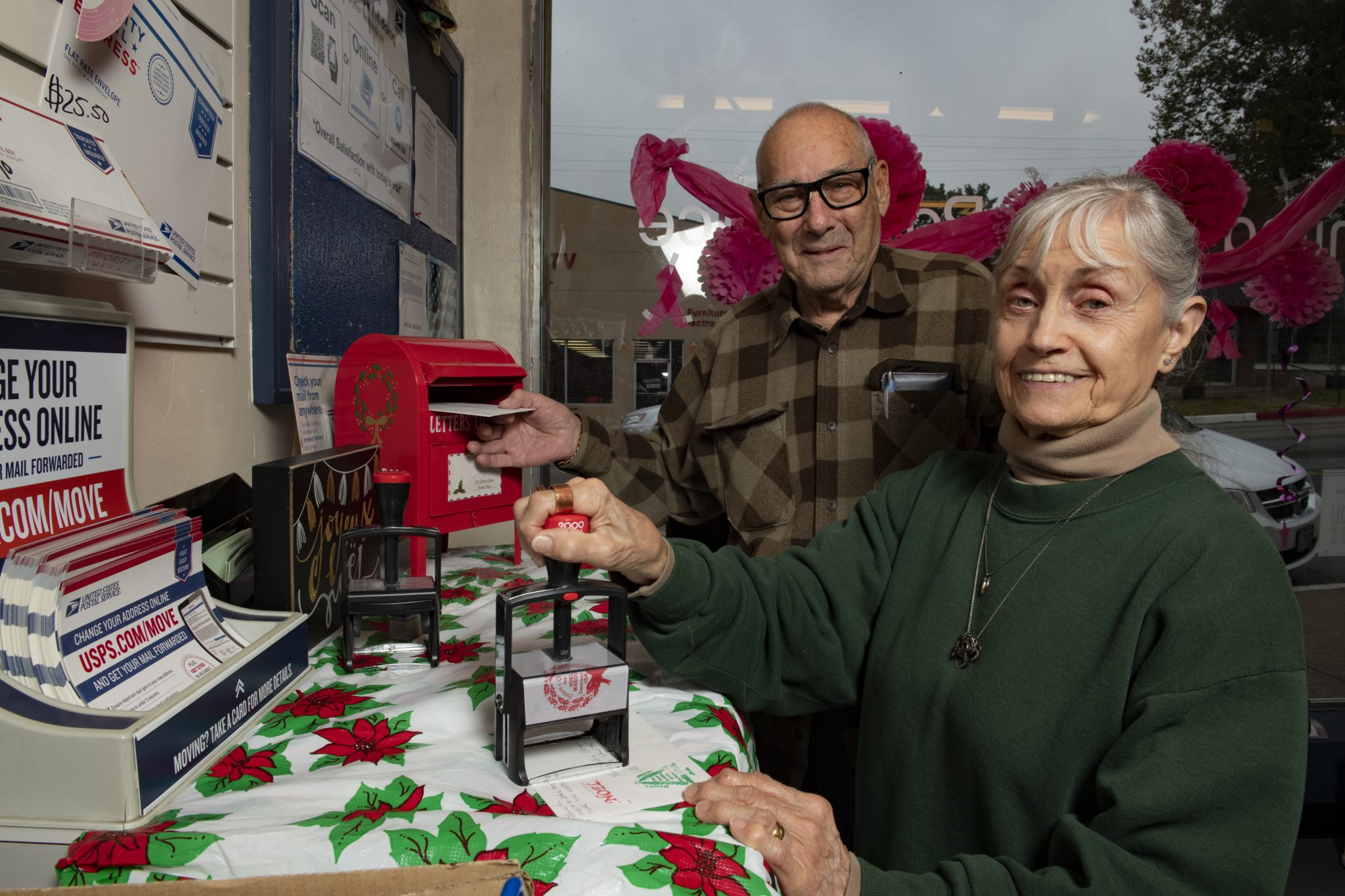 Locals pronounce the town name “knoll,” but toward the end of the year even residents get in the holiday spirit and temporarily change the pronunciation. Beginning on Black Friday and lasting well into the New Year, the post office in Noel becomes a stopping point for holiday greeting cards from across the country and around the world. They come to the small town in the southwest corner of Missouri for three stamps: one an evergreen tree and the other a red wreath, bearing the legend, “Noel, Missouri — The Christmas City in the Ozark Vacation Land,” and “Season’s Greetings from Christmas City, USA.” The last reads simply, “Noel.”

“There are people who, for them, getting a card in their hand is really special, and it’s something they look forward to every year,” says U.S. Postal Service Officer In Charge Lynn Howerton, adding there is no additional charge for the stamps. “I can’t see this tradition ending any time soon.”

Local legend holds that Postmaster Edward T. Rousselot started the postmark tradition in 1932, and singer Kate Smith brought it into the national spotlight through radio and television performances. During the 1940s and ’50s, the cards arriving at the Noel Post Office are estimated to have numbered more than a half a million.

Because this flood of Christmas correspondence starts pouring in at the busiest time of year for Lynn and postal clerk Patricia Coggin, a small army of volunteers from near and far lend a hand to help stamp letters at the post office.

Noel resident Dot Harner has made her own journey during Christmases over the years. Once a recipient of the cards from her brother, Bob Obenshain, while living in Denver, she then became a volunteer with her sister-in-law, Peggy, during Dot’s holiday visits before she moved back to town. Since 2010, she’s helped organize roughly four dozen volunteers who set up shop in the post office’s front lobby Monday through Saturday, taking turns to get the day’s cards stamped and ready to send out.

“We put quite a few through there,” Dot says with a laugh. “Your arm gets sore the first couple days, but after that you get back in shape.”

Dot decorates the office and, with some help from local school kids, paints the Main Street-facing front window. Volunteers bring cookies and candy, and visit with friends who they may not cross paths with save this one special time of the year. That’s partly the reason folks like George and Mary Tarwater have been volunteer stampers for at least one shift per season since 1982.

“After retirement it turned into a couple of days,” George says with a smile. “That’s why I tell people, ‘whenever you retire, don’t tell anybody.’ ” He adds that since the post office replaced the older ink pads and rubber stamps with a self-stamper, the job has become much easier and the letters get stamped faster.

“I think the fun part is all the people you get to talk to and see, and see where they come from,” Mary says. “And of course, it’s fun too when my kids call from Kansas City to say, ‘we saw you on TV!’ ”

Volunteers use a well-worn map posted by the counter to keep track of where the cards originate. So many come from the area around Noel that the tri-state intersection of Missouri, Oklahoma and Arkansas is no longer legible. Groups from Kansas City and Grove, Oklahoma make a special trip for the occasion or tie it in with a weekend vacation. Others from the nearby Arkansas towns of Bella Vista and Rogers bring their cards in by the load, some numbering 500 at a time and some making more than one trip. Mary notes that members of a Tulsa, Oklahoma car club caravans up to Noel, sometimes in their classic rides, for the day to stamp their own cards before heading back.

And yet a fair number of pins are stuck in the map’s borders, indicating what direction they traveled to Noel from overseas. Predictably, a big international pen pal is France — where “Noël” is synonymous with the Christmas season. George, Mary and Lynn can recount cards that traveled from England, Germany, Sweden, Finland, Norway and even a few sent from a pair of Christmas card collecting siblings in China.

“Christmas Island, Nova Scotia does stamping up there and they send cards,” Dot adds. “But we’re the only Noel in the U.S.”

That distinction hasn’t lost its charm, as every year the Yuletide tradition puts Noel in the national news. However, with the widespread use of email, social media and online bill pay, postal employees also have noticed a general downward trend in letter mail, which has also affected the number of Christmas cards delivered to the Noel post office. They keep busy with a multitude of packages and presents that arrive on a daily basis, but over the last three or four years Lynn says she’s seen the number of cards sent for special stamping drop from 60,000 to around half that amount.

“That’s still a lot of Christmas cards to come through here, but that’s a big drop,” she says.

If the lower mail count is a sign that the holiday spirit is dying, then it’s going to die hard, if Lynn has anything to say about it. Aside from the decorating and holiday cheer that the volunteers bring, the post office also holds a small drawing contest, judged by local businesses and post office box customers, for second and third graders at Noel Elementary School.

“It’s nostalgic, it’s fun and it’s different,” Lynn says. “It’s just a little thing we try to do to keep everybody in the holiday spirit.”

Postal employees, volunteers and residents agree there’s something more to the tradition than simply the novelty of receiving a postcard or letter in December that happened to be stamped in a town called “Noel.” The cards are a tangible sign not only that someone was thoughtful enough to think of someone else during a busy time of year, but that they went the extra mile to put the special postmarks on it and send their love and appreciation. The feelings of friendship and community that have grown around a few simple stamps here in Noel speak to the true spirit of the season, and will hopefully keep the holiday tradition going for years to come.

“We’ve been known as the Christmas City for so many years, I don’t want it to die out,” Dot says. “I’ve seen the enjoyment of people receiving it — I’ve been one of those people — my friends who have seen it remark on it every year, and it’s just a joy that comes out at Christmastime. We’re just trying to keep it going.”