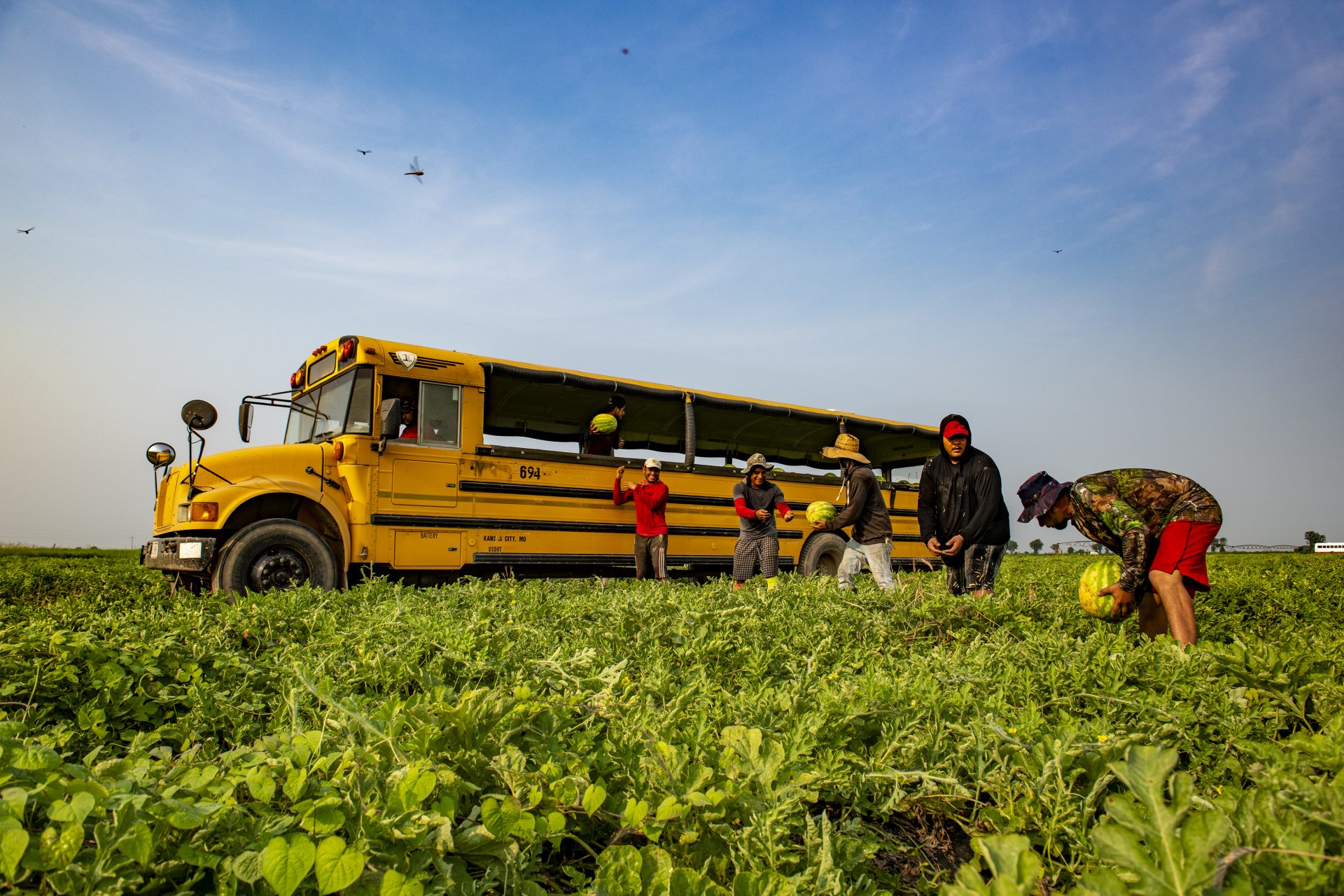 Missourians are accustomed to seeing school buses in the summer. In the Bootheel, they’re likely to be found parked in the middle of a field or traveling country roads between farms. These buses are slightly modified, the seats and windows having been removed because their passengers are not students but watermelons.

“When I was a kid, a lot of people would raise a patch of melons when they didn’t require any infrastructure,” says Steve Droke, a Pemiscot-Dunklin Electric Cooperative director and fourth-generation Bootheel farmer. “So, in this area we really don’t have more acres of melons now than we did then, it’s just that they left and left the market to those of us who were willing to invest in the concrete and the infrastructure.”

Steve has seen his summers change from the 1960s when Jubilees, Crimson Sweets, Charleston Grays and Black Diamonds were loaded on railcars to St. Louis. Today, seedless varieties such as Crackerjack, Road Trip and Captivation are what the market demands, and during peak season in July they leave Droke Family Farms by the semitrailer load destined for stores in America and Canada and sold under the label “Missouri Melons.” The only thing that hasn’t changed in all that time is the summertime desire for a juicy watermelon at the backyard barbeque or on the family picnic table, and the fact that all those heavy fruits are truly handpicked. Steve can’t suppress a grin when he says, “People ask me, ‘how do you pick watermelons?’ I say, ‘one at a time.’ ”

On the farm in Hornersville, the Droke Family Farms team which includes son, Skyler, plant roughly 200 acres of melons by mid-April. They comprise the Drokes’ smallest crop, far outnumbered by beans, corn, peanuts and cotton, but make up for their footprint in terms of sheer labor. Soil probes, which give moisture, water pressure and nutrient readings, must be set. Combined with the weather stations, these give farmers invaluable data about what’s happening to the crops below the surface — sometimes with surprising results. A cotton field one day after a rain may still read as adequately moist, while the melon beds are dry. Surrounding each season, the irrigation drip tape and plastic sheeting must be installed and then picked up and put back into storage.

“We’ve learned a lot about watering,” Steve says, noting 2020 was the first year he completely removed center pivot irrigation and went to drip tape. “Of course, this is all about sustainable agriculture.”

The changes were made just in time. During the summer of 2020 while Steve watched fellow melon farmers’ crops burn up under a brutal summer sun that outpaced center pivot systems, he was able to pinpoint what was needed and more importantly when on the melon beds. As yield fell off in other parts of the south and Midwest due to the extreme heat, Hornersville became Watermelon City, U.S.A. for the national market. Steve’s luck had flipped from his first year after college when he began farming his own land in 1980.

“That was the year I graduated, and we had a great drought — didn’t even make a crop,” he recalls. “Interest was 18% to 20%, and we didn’t make enough to even pay the interest back, so I started way behind the eight ball.”

Although deep in melon country, Steve was the first of his family to grow them commercially. He started with a 20-acre field, and quickly realized that economies of scale were the only way to make so much manual work profitable. As other farmers got out of the watermelon game or sold land because they had no family to follow them, Steve grew his operation. Soon, he needed the storage space and loading dock to accommodate roughly 50,000 to 70,000 watermelons per acre that might be picked and boxed in a single day.

“With watermelons you’ve gotta average them, because one year will be boom and the next year will be bust, but when you’re planting them you never know,” Steve says. “It’s all about revenue per acre.” 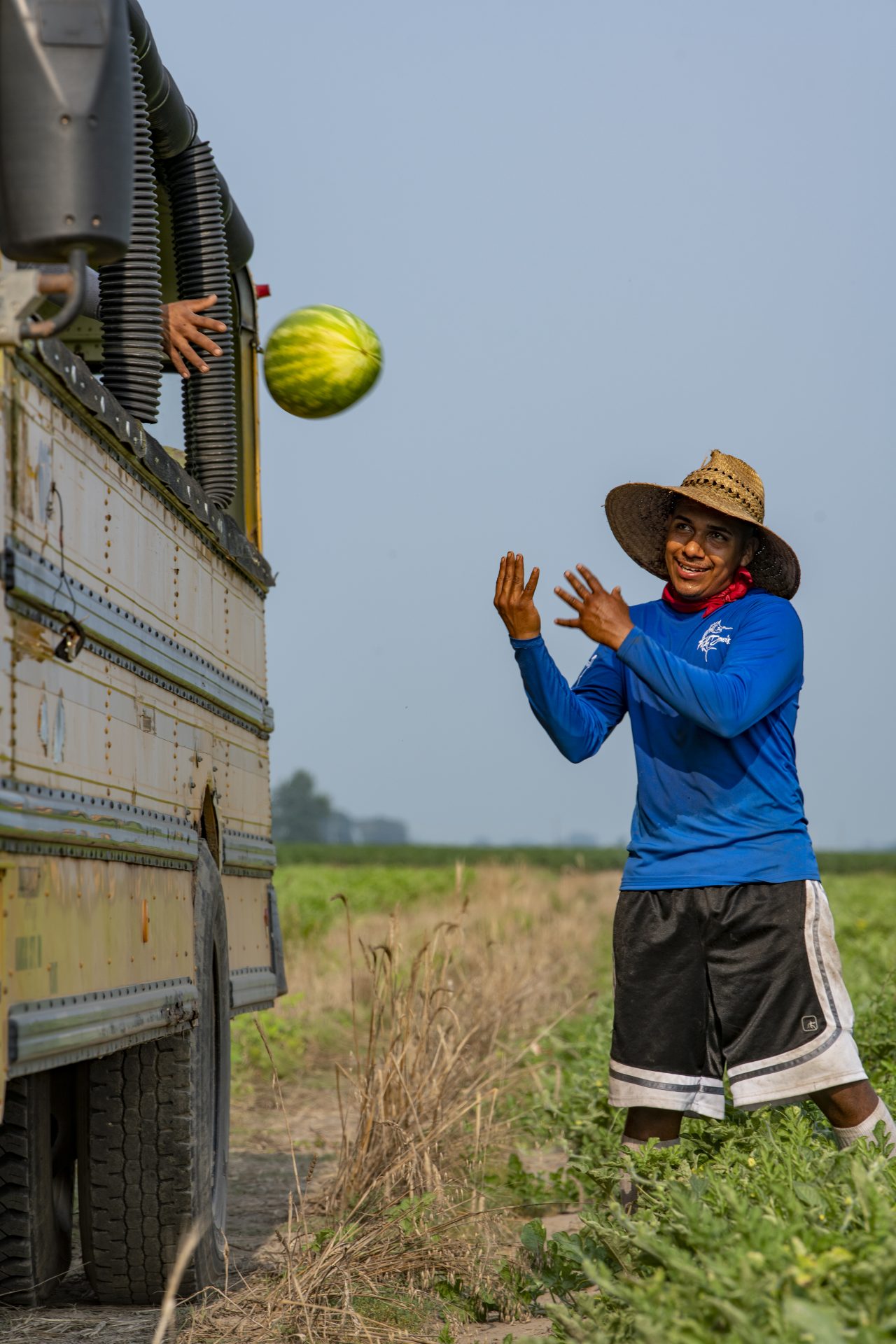 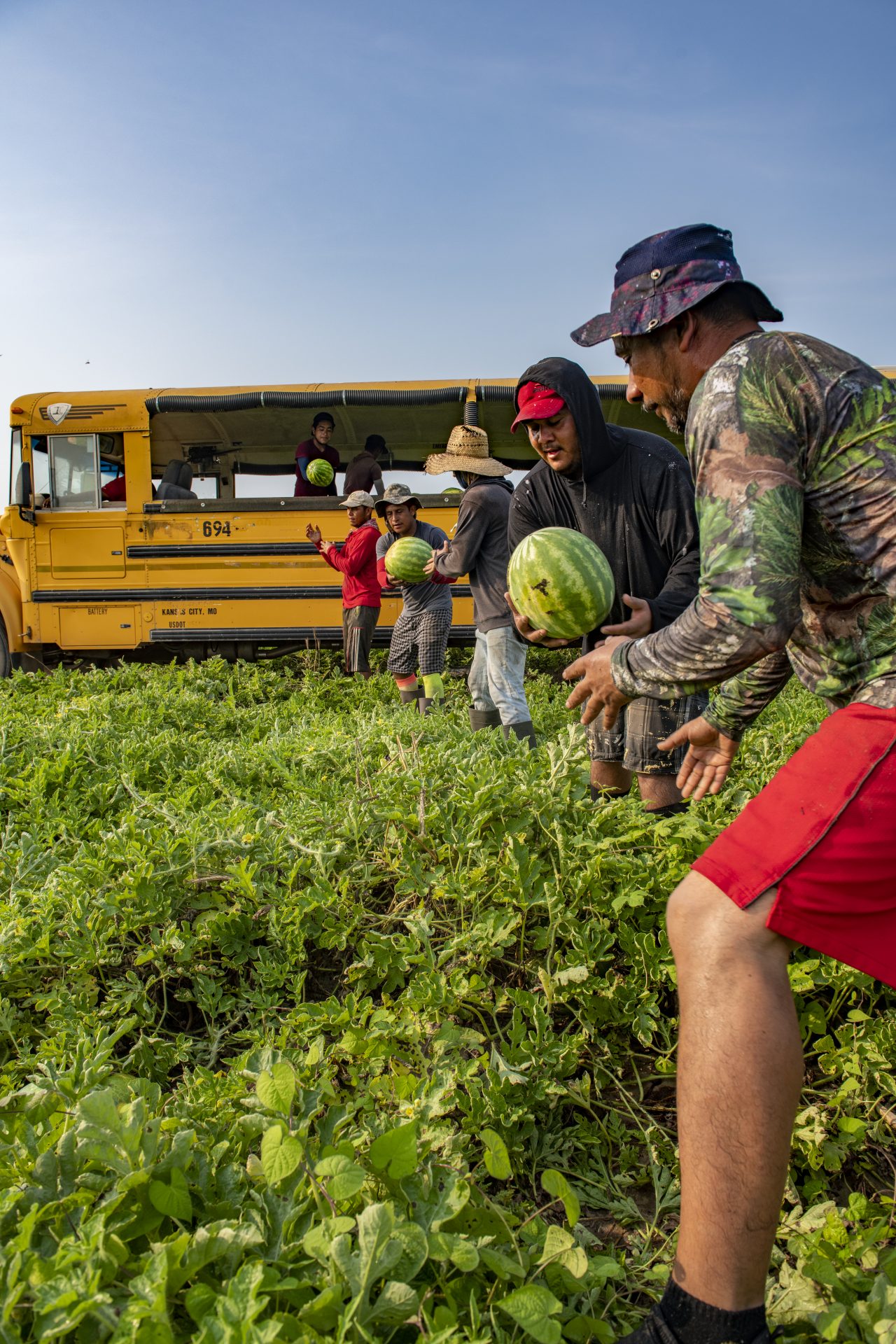 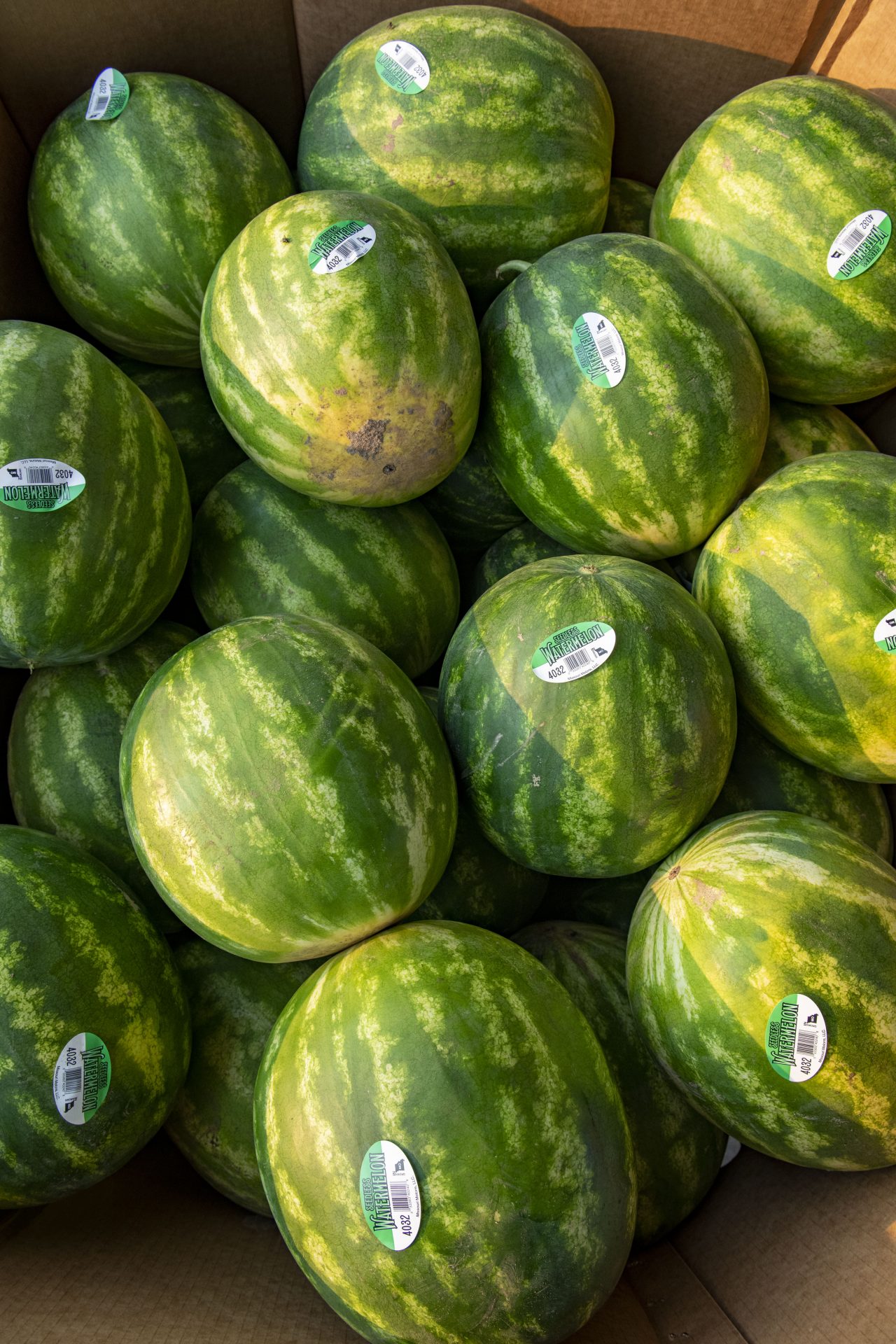 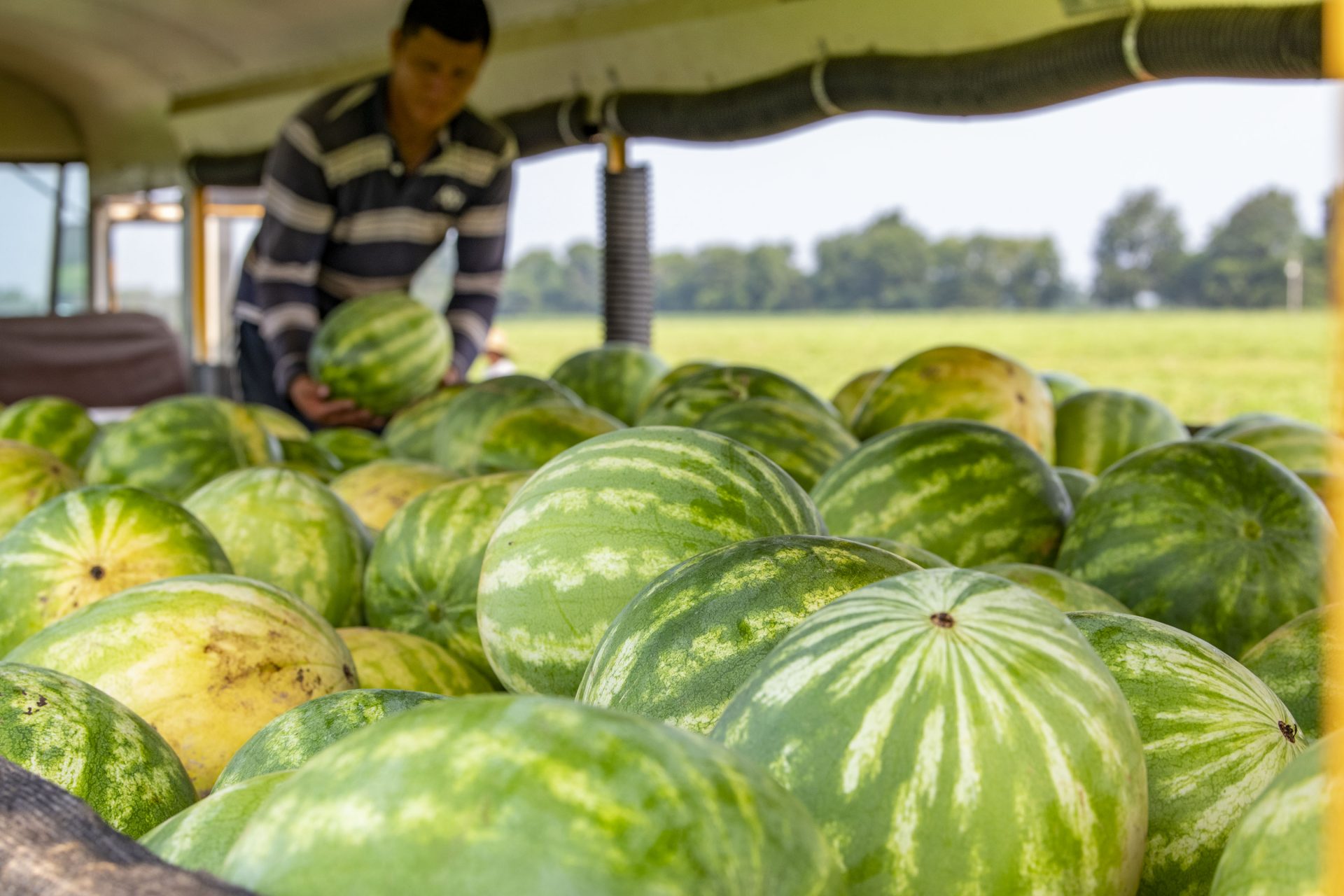 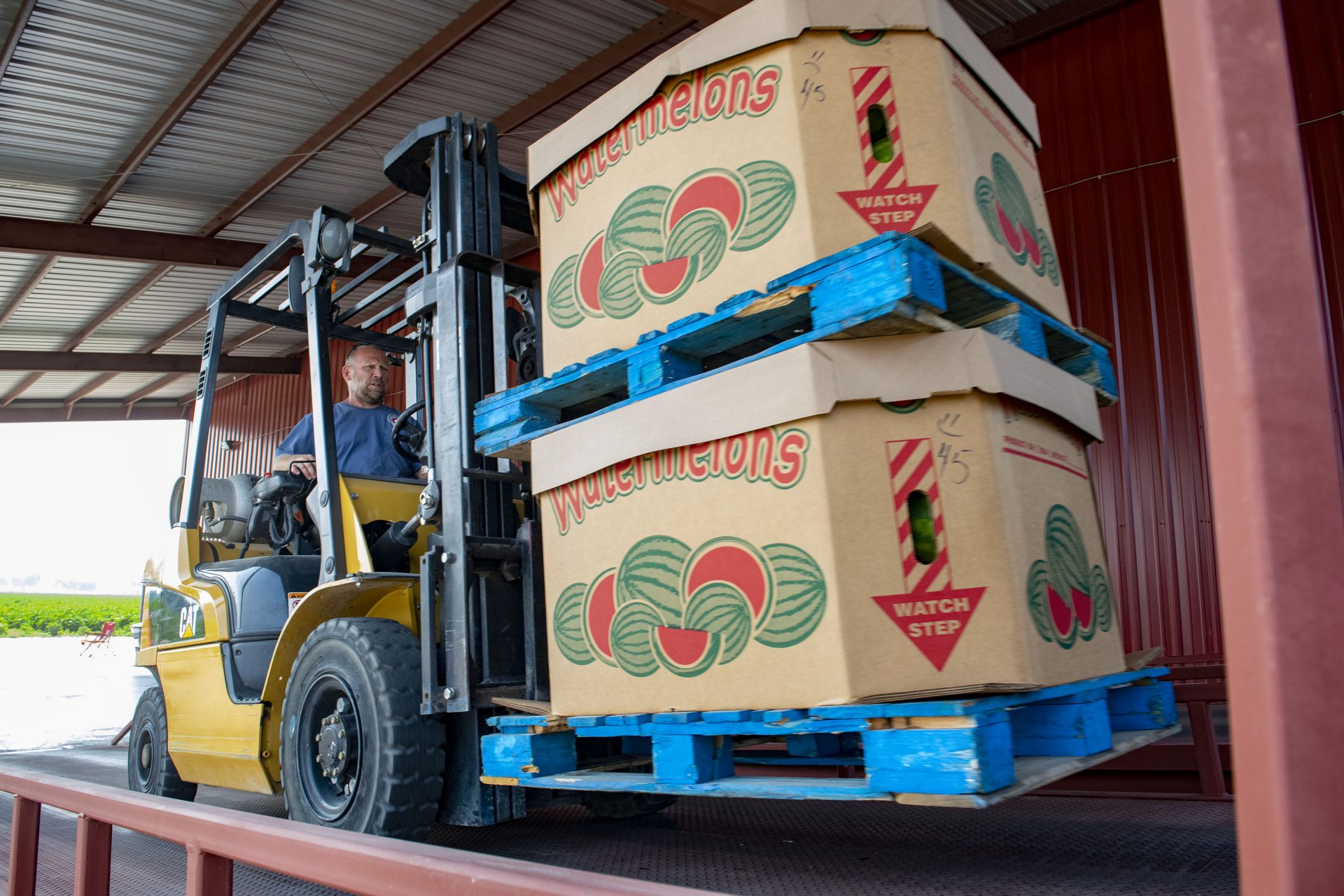 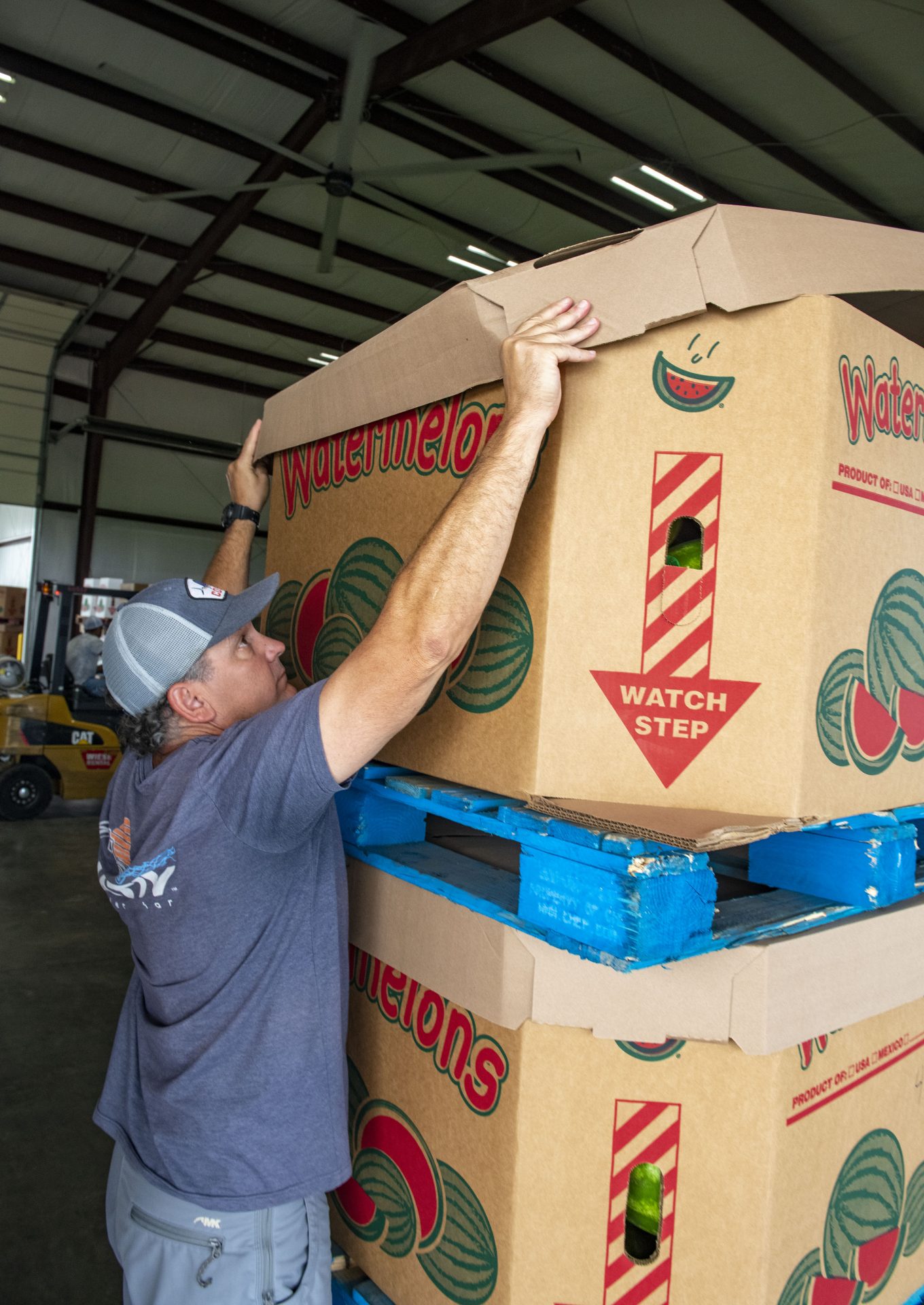 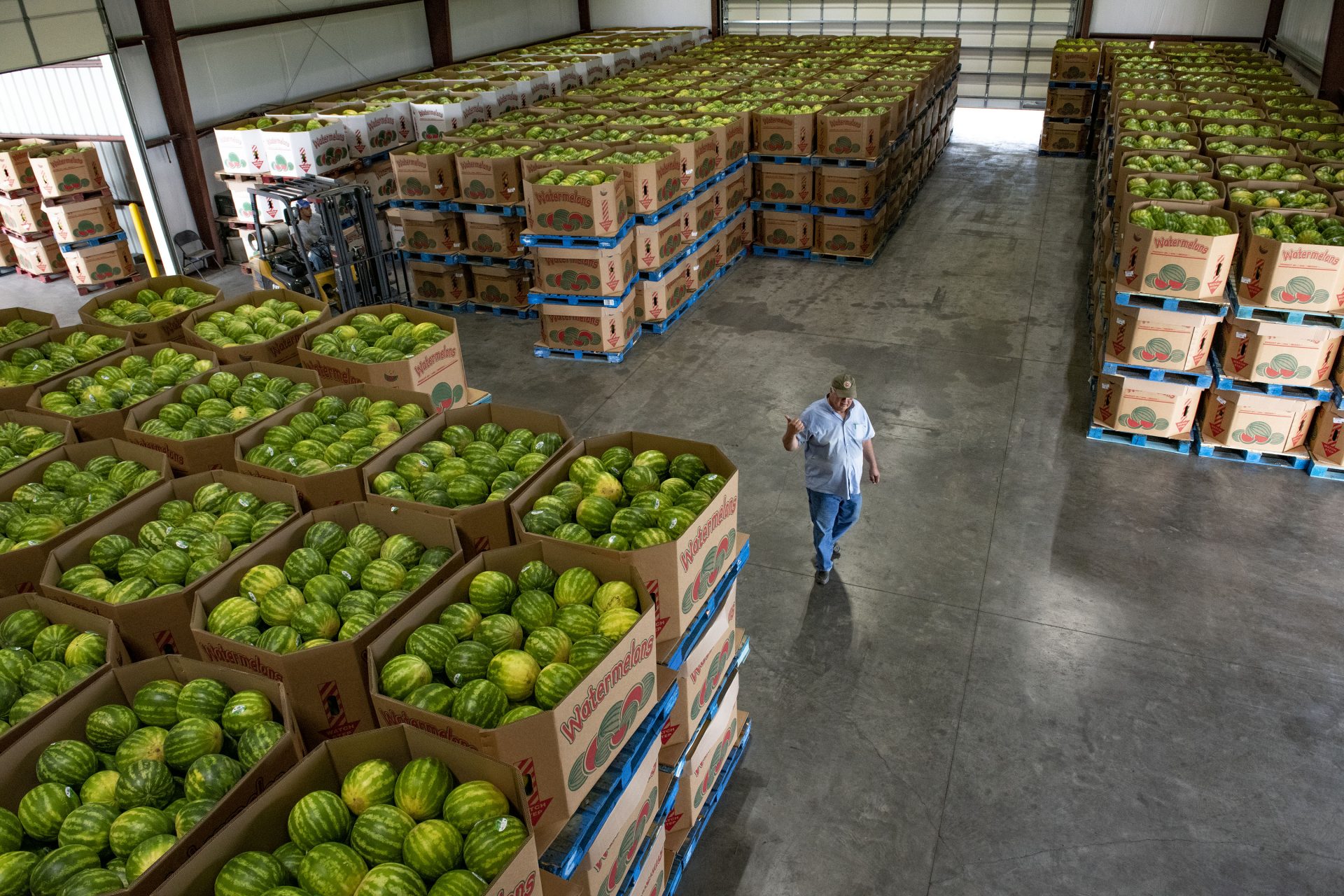 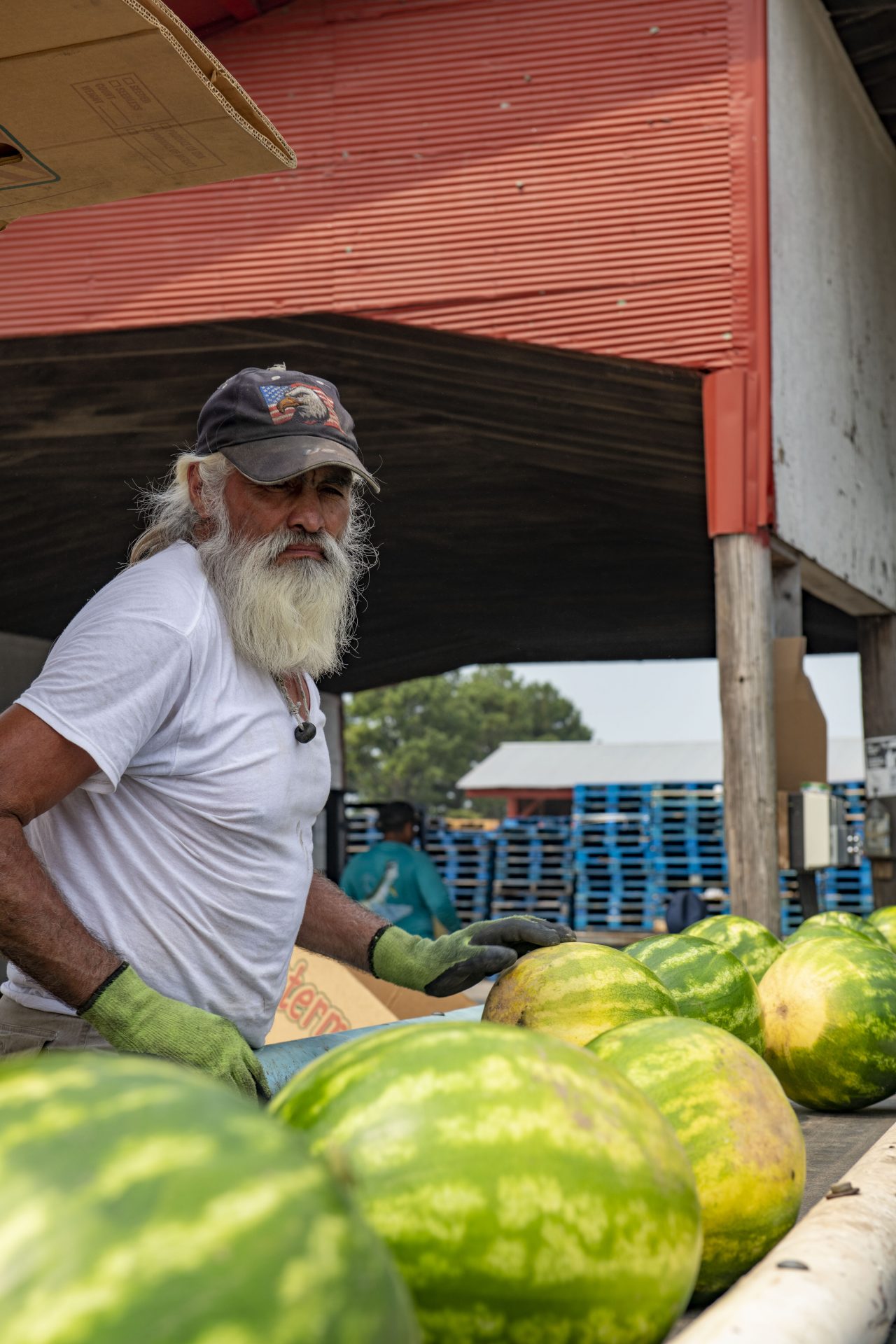 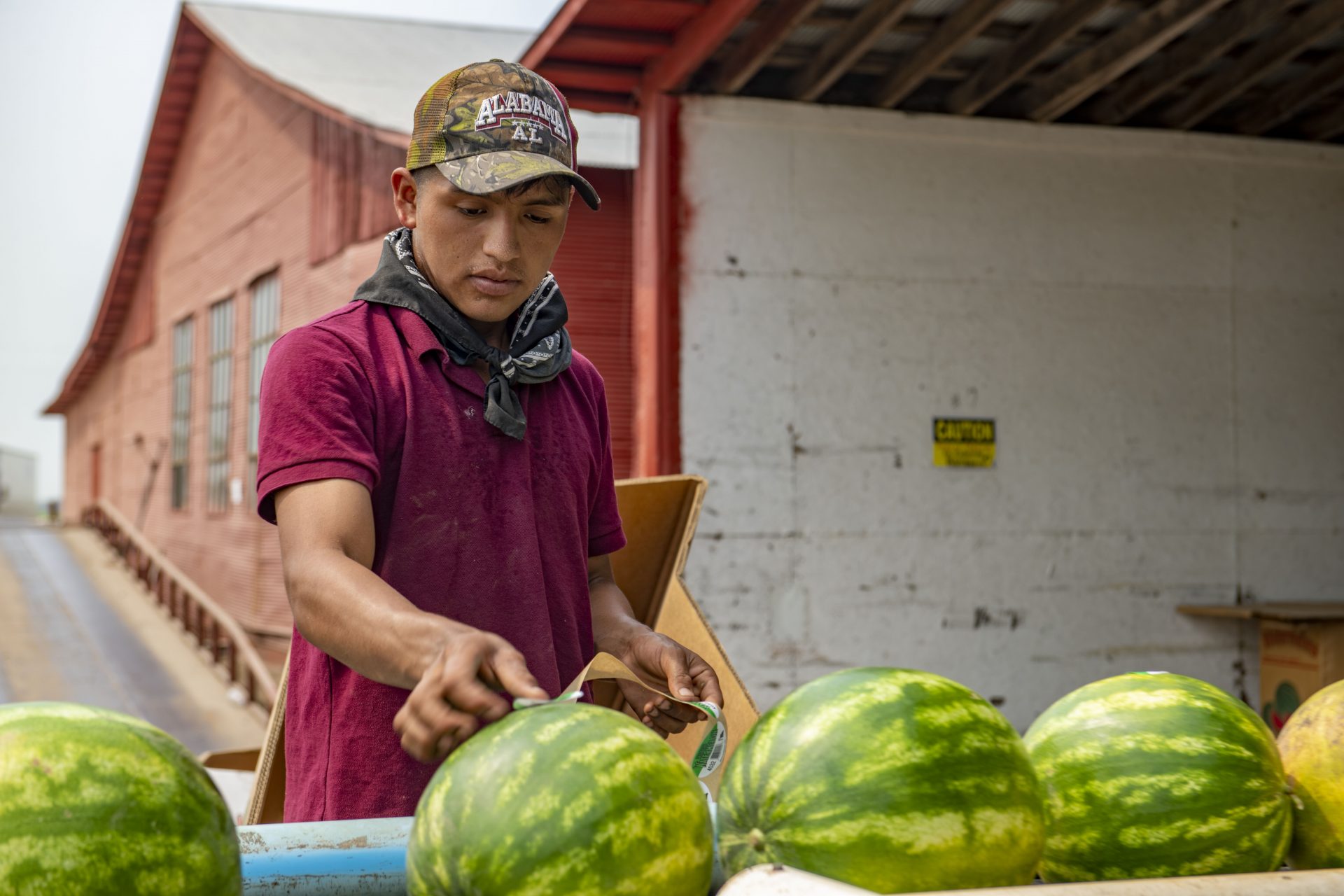 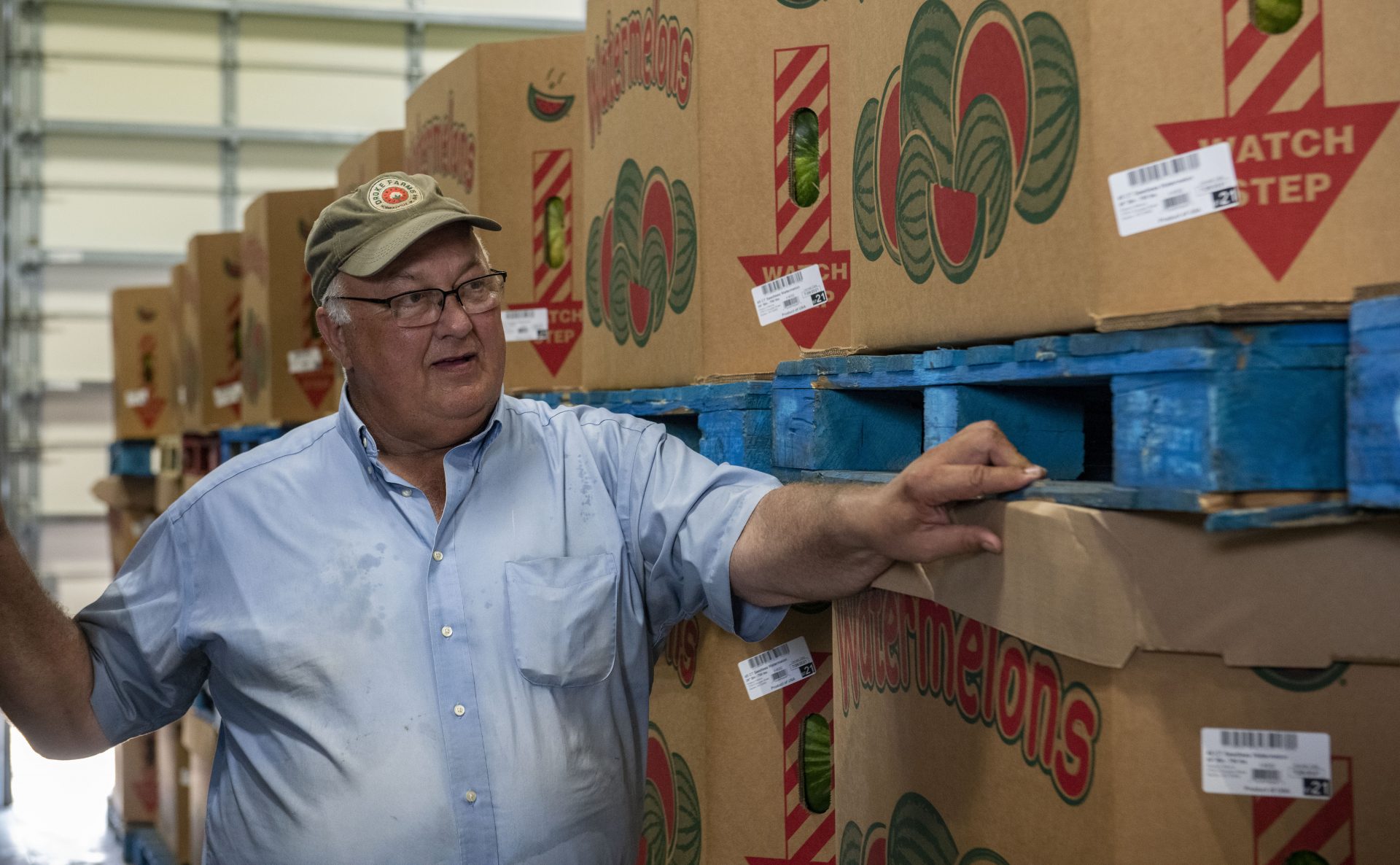 Farms with big acreage hire professional picking crews who follow the harvest north, beginning in Florida in the early spring and ending in Michigan from late summer into early fall. Working in teams, the pickers tackle a fresh field of melons with speed and precision. A small group leads the pack with machetes in hand, rapidly eyeing the crop and determining which are ready to be picked, which need more time on the vine and which are damaged from wildlife or have simply grown past their prime. Behind them, the bus travels up and down the rows keeping pace with groups of pickers who spread from the side like wings. Smiling, laughing and sometimes singing, they form a bucket brigade tossing the melons down the line and up to the duo catching them inside the bus. Every few minutes the bus stops, the workers rehydrate before rotating positions and the process starts all over again. Once the bus is full, the driver heads for home and another arrives to take its place.

Once the melons are off the vine, it’s a race against the clock to turn a profitable crop. Keeping the melons cool while in storage and having trucks handy is the logistical puzzle to be solved every morning of the picking season. If the melons sit for too long in the heat, they’ll start to leak. A rejected load means costs on return freight, materials and disposal, not to mention wasted watermelons. Back at headquarters the melons are quickly unloaded from buses to conveyor belts where the undesirable fruits are culled. The best are sorted and boxed by size. Pallets of boxes line the storage area awaiting trucks — sometimes as many as 15 per day — to take them to grocery distribution centers. But even the grade outs — melons which have a scar or are misshapen or sunburned but are otherwise fit to eat — find a home too at area fruit stands and flea markets. From the vine to the box, a dozen different people may handle each melon by the time it’s sliced up in the backyard. In the operation’s early days, Steve says, even the loading was done by hand.

“I picked ’em, put ’em on the trailer, drove it up to the house, and when the truck came, I crawled up in there, they threw ’em to me and I stacked ’em,” Steve says with a laugh. “But I was 30 years old, mean and lean, and it makes a big difference.”

While in July the watermelons are all business, in late summer they’re also a source of pride for Bootheel farmers. Skyler has taken home his fair share of first-place wins at giant watermelon contests. His most recent win in 2019 weighed 145 pounds. The rich, sandy loam of the Bootheel helps, but Steve says good soil health, nutrition and pH balance are the keys, insisting “if you can raise tomatoes, you ought to be able to grow good watermelons.” But whether you grow them for size or to savor, prefer them fresh from the field or refrigerator, or feel they taste better plain or seasoned with salt, pepper, hot sauce or even yellow mustard, Steve says there’s one other universal secret to growing a quality melon.

During more than 40 years of farming, Steve has seen the common omens play out. Small plots have become a thing of the past, and the average age of the farmers who tend them continues to climb. As conveyor belts whir, forklifts stack boxes, empty buses head afield and watermelon-laden trucks light out for the highway, he looks around the family farm. He points out the house his grandfather, Everett Reel, a master carpenter, built for his children; the barn Steve, his father and brother rebuilt after it was struck by a tornado and the new facility that keeps things moving like clockwork. As he passes the torch to Skyler, he’s hopeful people will be eating a Missouri Melon for many summers to come.

“You see so many places driving around the country that you can tell were once an icon or a symbol,” Steve says. “My worst fear would be for this place to turn into a ghost town. Hopefully, he will be a sharp enough manager to keep this thing operating.”