If anyone thinks book clubs are quiet, somber groups, they haven’t met the Happy Bookers of Linn. Although the eight current members of the club are more reliable than GPS devices for finding the nearest bookstore or library wherever they go, they are better known for the lighthearted, zany way they promote books and reading. They know how to have fun together, they love reading and they appreciate the close friendships that have taken years to develop. One of Missouri’s longest-lived local book clubs, they’ve been meeting almost every month for the past 27 years. Together, they have read and discussed nearly 300 books.

Lisa Klebba, the founder of the group, has seen members come and go. At one time, the circle swelled to 18 members, but Lisa finds the smaller group more satisfying. She recalls how difficult it was to find time to read and socialize with other adults while her husband worked full time as a banker.

“I started the Happy Bookers because I had moved to a small town, and as the mother of four, I had finally read my first book from cover to cover since having kids,” Lisa says, “and I wanted to talk to adults about it.”

Books have always been part of Lisa’s life. Before marrying, she worked as a librarian for a law office, and as her children became school aged, she went back to work in Linn at the public library and later at State Technical College of Missouri. Even in retirement, she formerly worked as a substitute librarian for two libraries while volunteering at a third. Lisa credits her mother for making books and fun an important part of her life. “My mom didn’t hook up the TV from the time I started seventh grade until my junior year in high school,” Lisa says. “Going to the library was a big thing.”

Missouri is home to thousands of book clubs. Many are sponsored by local public libraries or churches, but most are like the Happy Bookers, informal groups of friends and neighbors. Of all those book clubs, it’s likely there is only one that’s donned sumo wrestler costumes and marched in a local Christmas parade to show that they celebrate reading in a “big” way. That would be the Happy Bookers. And it would be difficult to find another book club that has paraded in red boa scarves along with matching white top hats and sweaters. In a Christmas salute to the famous Radio City Rockettes and to the joys of reading, the Happy Bookers became the Bookettes. But that’s in the past and the group is still very much alive and kicking, just not eye-high kicks. 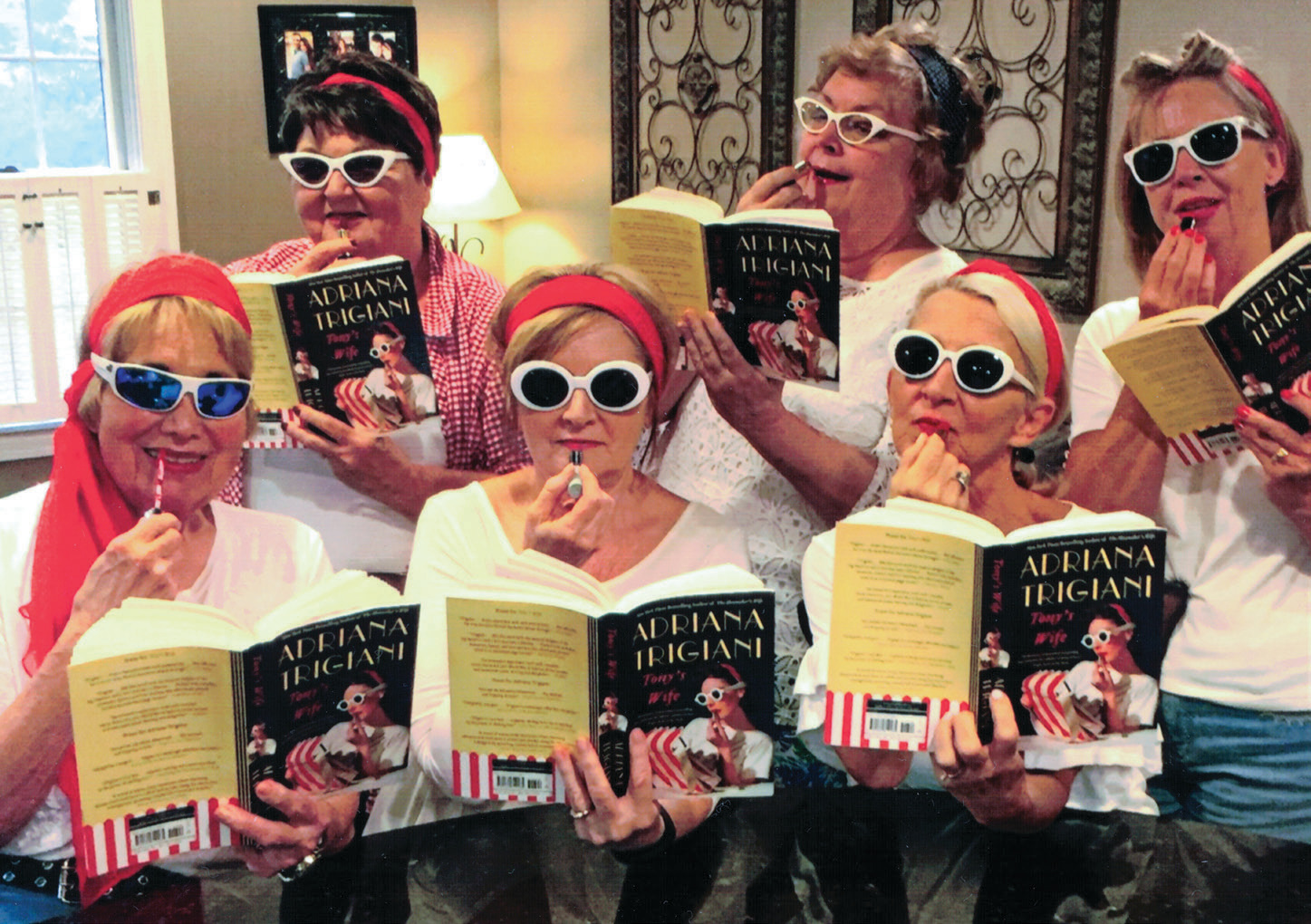 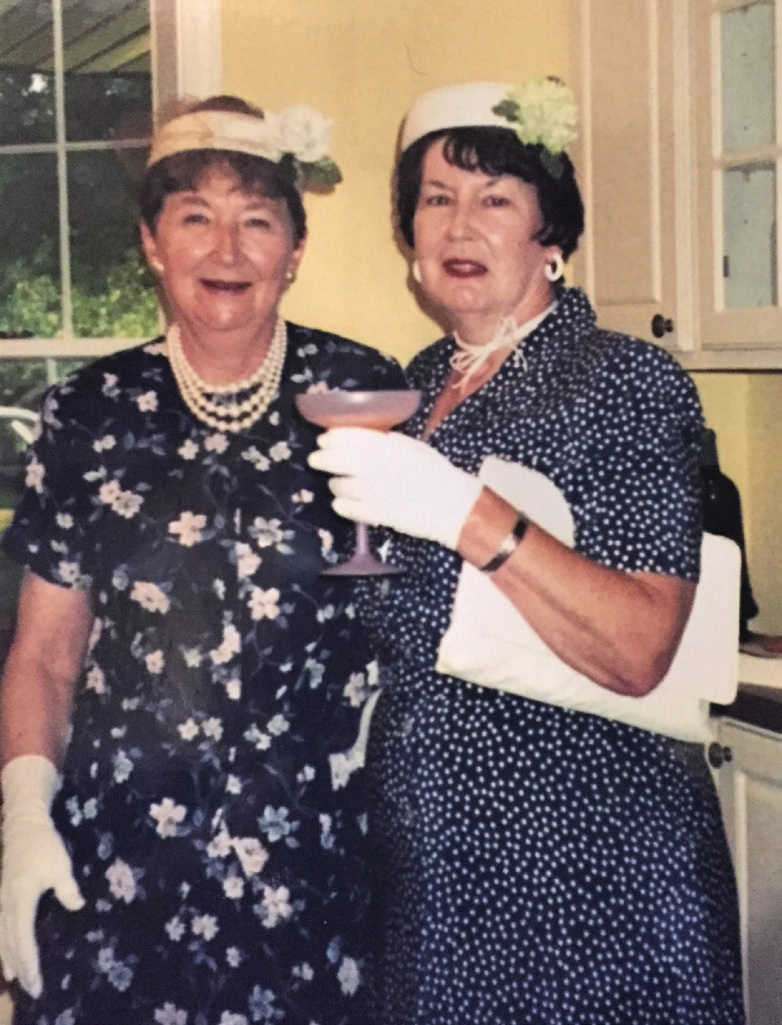 For the Happy Bookers, fun is the spice that adds flavors to their meetings and lives. “I like to have fun,” Lisa says. “I like to be silly and to dress up, and I wanted my kids to see that reading is fun. Definitely, it’s the fun that has kept our book club going for the last 27 years.”

Having a good time comes easily to members of the Happy Bookers. At one meeting a year, the members shed their inhibitions and slip into costumes, dressing up as characters in a book they have just read. Not taking themselves too seriously means that an honorary title is bestowed on any member who not only hosts a meeting at her house, but also volunteers to lead the discussion that month. That person carries the title of “Grand Poobah.” On the day of the meeting, the host has the honor of placing in her front yard the group’s colorful banner that lets neighbors know that the Happy Bookers are meeting.

One of those meetings can last a couple of hours or more. Of course, food is an important part of Happy Bookers meetings, whether it’s a light snack or a dinner based on a meal mentioned in that month’s book. Early last year, the group snacked on a cherry dish after reading a story in which the main character’s wife ate ciambella, a cake topped with cherries. The Happy Bookers aren’t the only book club to enjoy snacks or beverages related to a story they have read. But they are one of the few groups to be highlighted by the “The Book Club Cookbook.” At meetings they sometimes sip Missouri wines and have been known to try recipes from “Tequila Mockingbird,” a book featuring book-themed drinks.

Sharing a snack or meal and having thoughtful discussions are only part of the recipe for a successful book club. The Happy Bookers also make a point of traveling together, choosing places and events connected to their reading. Quick trips to Columbia or other mid-Missouri towns to hear local authors are routine, and they plan to go the extra miles together to a favorite bookstore in Kansas City. Their longest journey so far has been their 1,000-mile road trip to Jefferson, Texas, where they had makeovers at Beauty and the Book, which claimed to be the only combination salon/bookstore in the United States.

Lisa says they hope to find time to attend Columbia’s Unbound Book Festival, which brings book lovers and authors together for several days of discussion each spring. This year the festival will be held online. Alex George, founder and director of the festival, is a fan of book clubs and speaks to them frequently. He believes book clubs have a positive impact on their members but finds it’s difficult to pin down how book clubs affect a community. “That’s because, mostly, nobody hears about them,” Alex says. “Then you have the ladies in Linn marching in parades. Anything that promotes books and encourages people to read is, to my mind, a good thing.”

Another good thing is that the Happy Bookers have become something of a support group for its members. “We’ve been through sad times, and there have been wonderful happy times,” Lisa says. “We always keep in touch, especially if someone is down and needs support.”

There’s something about sharing thoughts and feelings about books that opens people up to each other and encourages friendships. Rita Starnes, who has been a Happy Booker since its first meeting, now lives in Jefferson City but gladly travels back to Linn for the group’s meetings. “People reveal themselves when talking about books,” she says. “You bond over books.”

After 27 years, the Happy Bookers have no intention of disbanding. “As long as we can still see to read, there’s a core group of us that’ll keep meeting,” says Carol Stamp, a 15-year veteran of the group.

Lisa shares that commitment. “I’ll keep doing it even if there’s only one other person beside me,” she says. Besides, the group has some unfinished business to attend to. They never went on their 20th anniversary trip they had been planning. A wedding and the birth of two grandchildren took priority. It may not be conventional to celebrate a 20th anniversary seven or more years later, but then, there’s little that’s conventional about the Happy Bookers.

For more information on the Happy Bookers, email Lisa Klebba at jlklebba@gmail.com.

Wax is a freelance writer from Columbia.