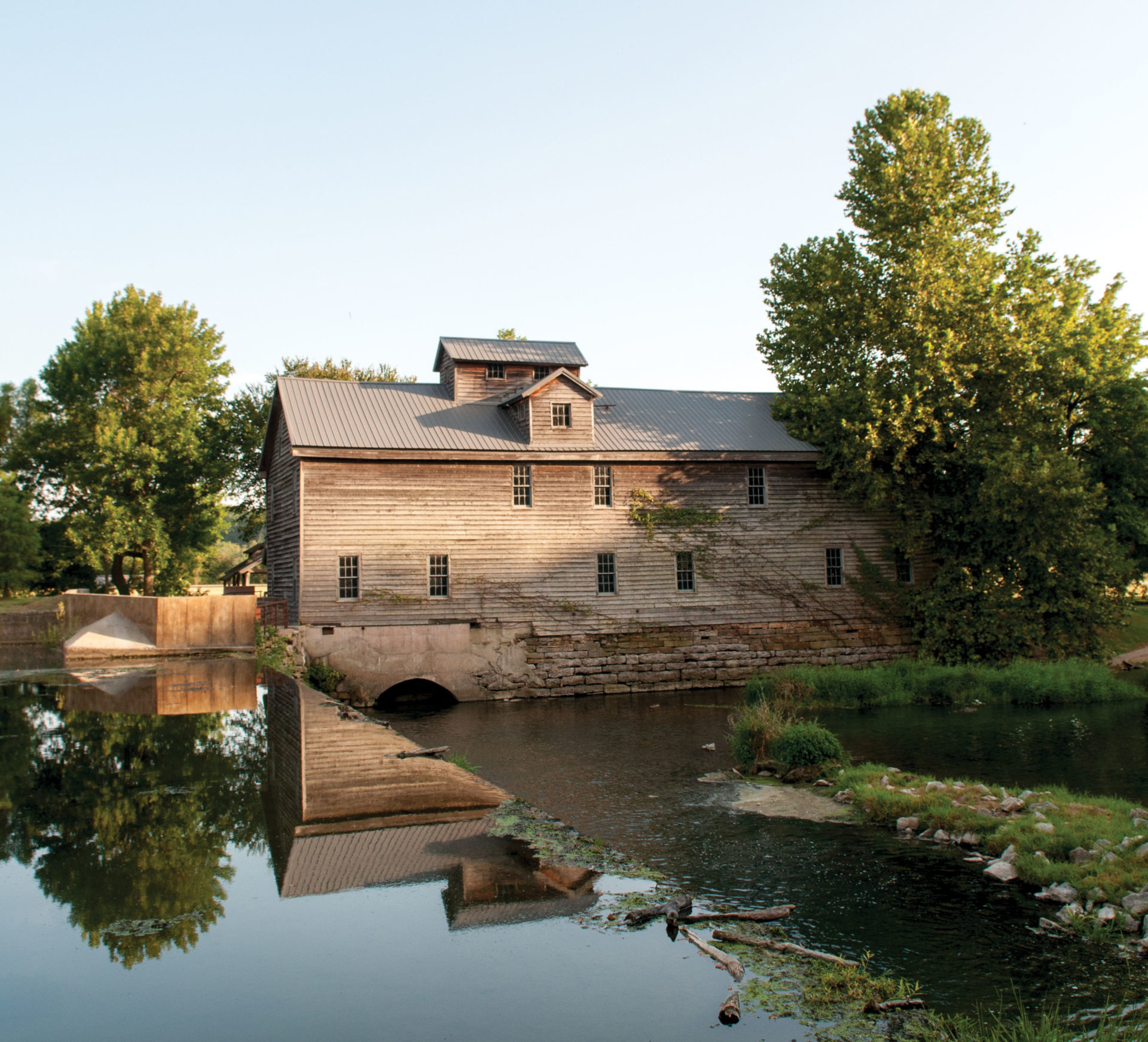 Kick off summer with an Ozarks mill tour

In the days before Amazon and Walmart, mills played an important role for rural communities. They were a place to get your corn ground into meal, but more importantly were the centers for commerce and social gatherings. A trip to the mill was a big deal for those country folk who might go months without seeing a neighbor. There were hundreds of mills spread across the Ozarks, where they were situated in the most scenic valleys in order to harness the power of moving water.

Finding the last of these old mills is a rewarding quest, particularly in these days of social distancing. Touring Missouri’s mills will broaden your horizons considerably as you travel twisting, turning roads that lead to spectacular scenery, clear-flowing springs and finally the weathered and worn veterans themselves.

Some are located in small towns or state parks, while others can be found miles from the nearest habitation.

Years ago, one almost had to stumble on the remaining mills almost by accident. That was before the late Mike McArthy devoted nearly 20 years of his life to documenting Missouri’s old mills through the lens of his camera. In 2007, the St. Charles resident published a softcover book titled “Historic Ozarks Mills.” The book sold out, and Mike approached Rural Missouri about having it reprinted in 2010. The result was a hardcover version printed at Walsworth Publishing in Marceline.

Armed with a copy of the book, one can create their own “Tour de Missouri Mills” using its turn-by-turn directions to find more than 25 mills located across southern Missouri and northern Arkansas. Once found, the history and folklore of the mills comes alive in the book’s 100 pages.

Here’s a look at a few of the mills in the book. Note that while some are publicly owned, others are on private property. These are best enjoyed from the roadside. If you visit, respect the landowner’s privacy and don’t trespass.

In either case, respect the fragile nature of these mills. As Mike put it, “They are a historical treasure. Kind of like the old covered bridges, once they are gone they are gone for good and they are never coming back.”

“Historic Ozarks Mills” is available for $20 plus shipping from our online store at www.ruralmissouri.org/store or by calling 573-659-3423. 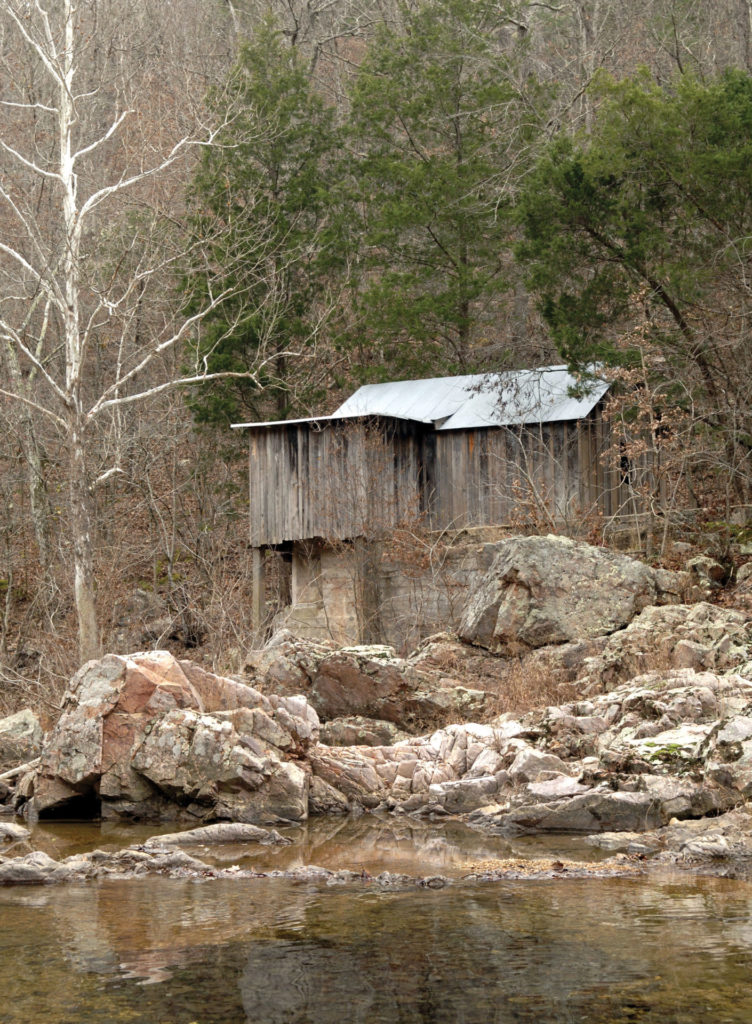 This mill built in 1928 ranks as the most remote of the Missouri mills. In fact, it may be easier to visit by hiking the nearby Ozark Trail than by car given the rough road that leads to it. The tiny mill isn’t much to look at, but the surrounding rhyolite rock shut-ins of Rocky Creek more than make up for the difficult trek. It’s located not far from Rocky Falls, one of the most spectacular waterfalls in the state, east of Winona. 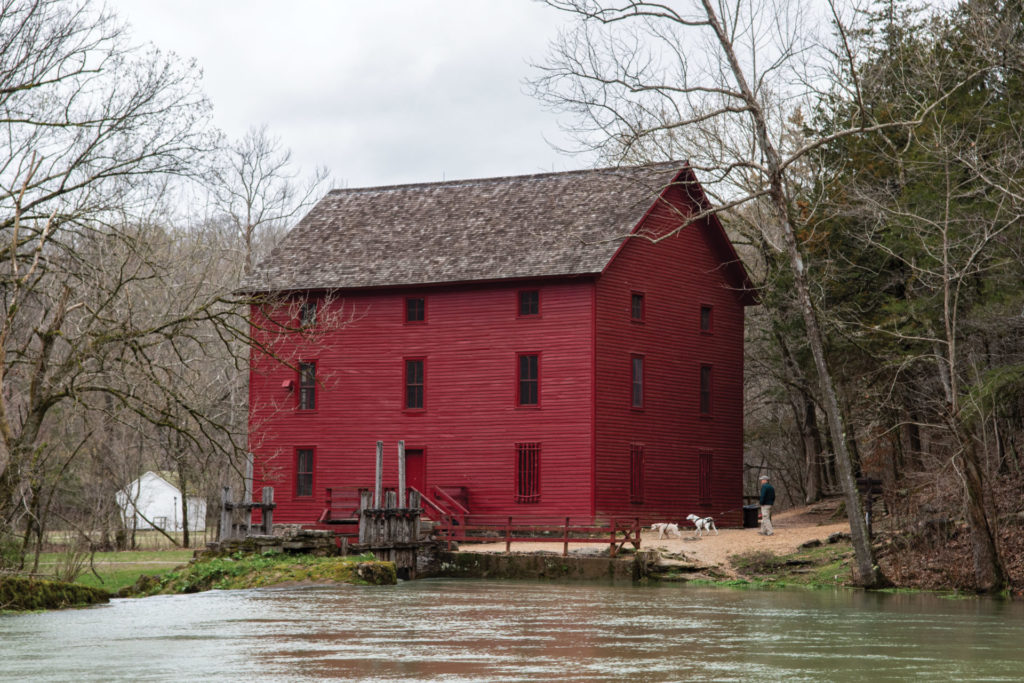 One of the most photographed spots in Missouri, the bright red mill located 6 miles west of Eminence rivals the Jacks Fork and Current rivers as the crown jewel of the Ozark National Scenic Riverways. The present mill dates to 1893 or 1894 and was originally white with green trim. It was powered by a beautiful spring that despite pumping out 81 million gallons of water per day only ranks seventh in size among Missouri springs. 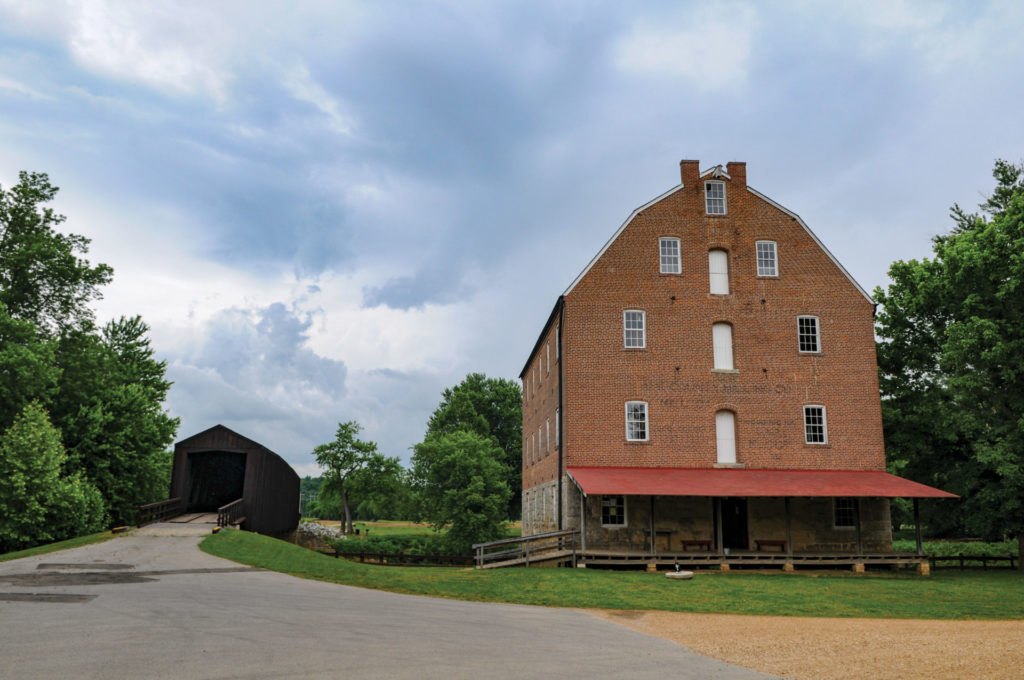 Bollinger Mill is unique among Missouri mills in that the site also includes the oldest of Missouri’s four remaining covered bridges. It’s an impressive four-story structure made of brick and limestone. Milling has gone on at the site since 1800 when the first log mill was constructed. A stone mill was built in 1825 but was burned by Union troops during the Civil War. After the war the present structure was built. The mill and covered bridge form Bollinger Mill State Historic Site located west of Jackson in southeast Missouri. 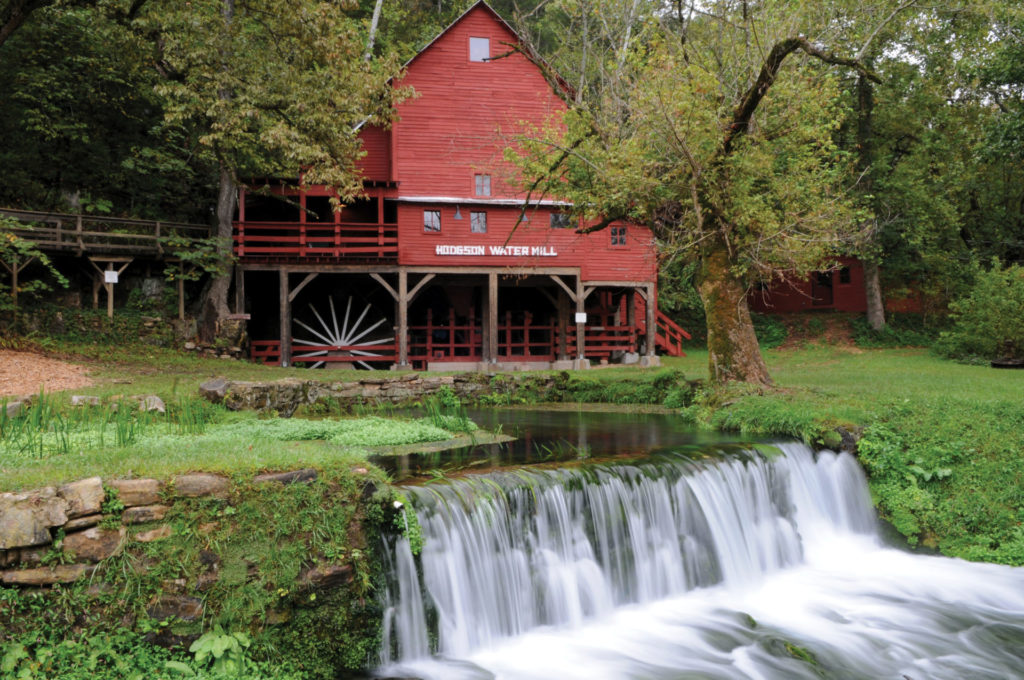 Rivaling Alley Mill for most photo-worthy destination is this mill, one of five located in Ozark County. The 29 million gallons of water pouring out of Hodgson Spring creates a beautiful spring branch that flows in front of the mill, ensuring every photo taken here is a keeper. Hodgson Mill dates back to the 1860s, but continued to operate until 1977. Its peak production was 1 million pounds of flour and meal per year. Though it no longer operates, the brand and the Hodgson Mill image live on in products made by an Illinois company. While in the area you can visit nearby Dawt, Rockbridge, Hammond and Zanoni mills. 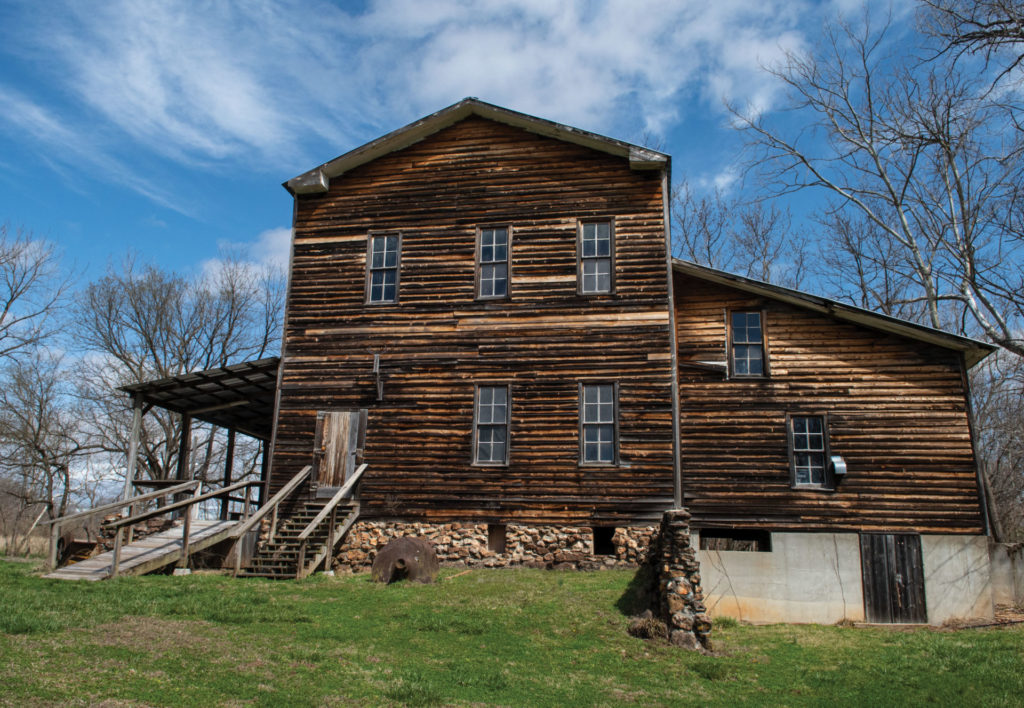 This mill, the last of the 10 that once existed in Dade County, was nearly lost to the rising waters of Stockton Lake. Instead, it was moved a mile to a peaceful location near Greenfield where it is the centerpiece of a 50-acre campground where many community events are held. The mill played an important role in the Civil War by supplying flour to hungry Union troops before the Battle of Wilson’s Creek. 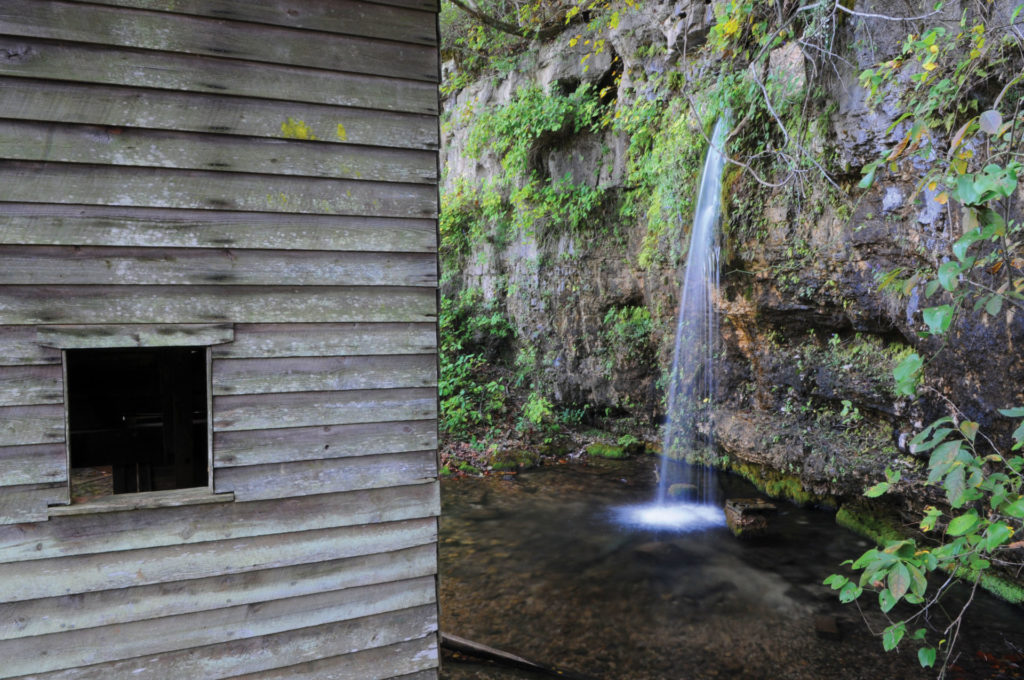 If you are looking for peace and tranquility, you will find it at this tiny mill hidden deep in the Mark Twain National Forest north of Alton and Greer Mill, another nearby mill that has been restored. Once a wooden flume carried water from a spring that shoots out of a hole in a limestone bluff to the overshot water wheel that powered the mill. It ground corn, ran a sawmill and even generated electricity for a time. A small pond, the builder’s log cabin and the mill are all that is left of a once-thriving community. 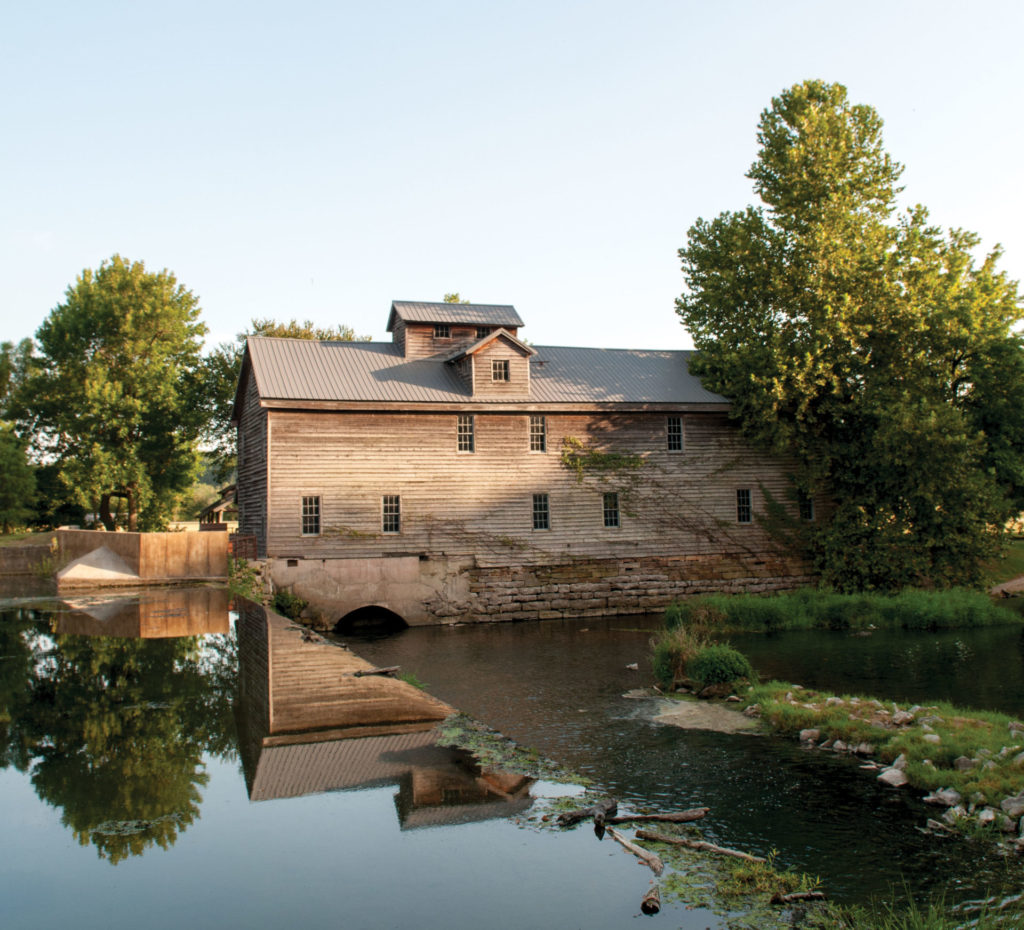 On the banks of Capps Creek sits this large mill that is part of a privately supported park. The mill once ground corn that was used for whiskey, giving rise to one theory on the name of the community called Jollification that sprang up around it. The mill was restored in 1998 and water-powered corn grinding returned. Since then, floodwaters have damaged the mill and the surrounding park, but friends of the mill held fundraisers to repair the damage. The park is open from dawn to dusk seven days a week with a $5 per car donation. 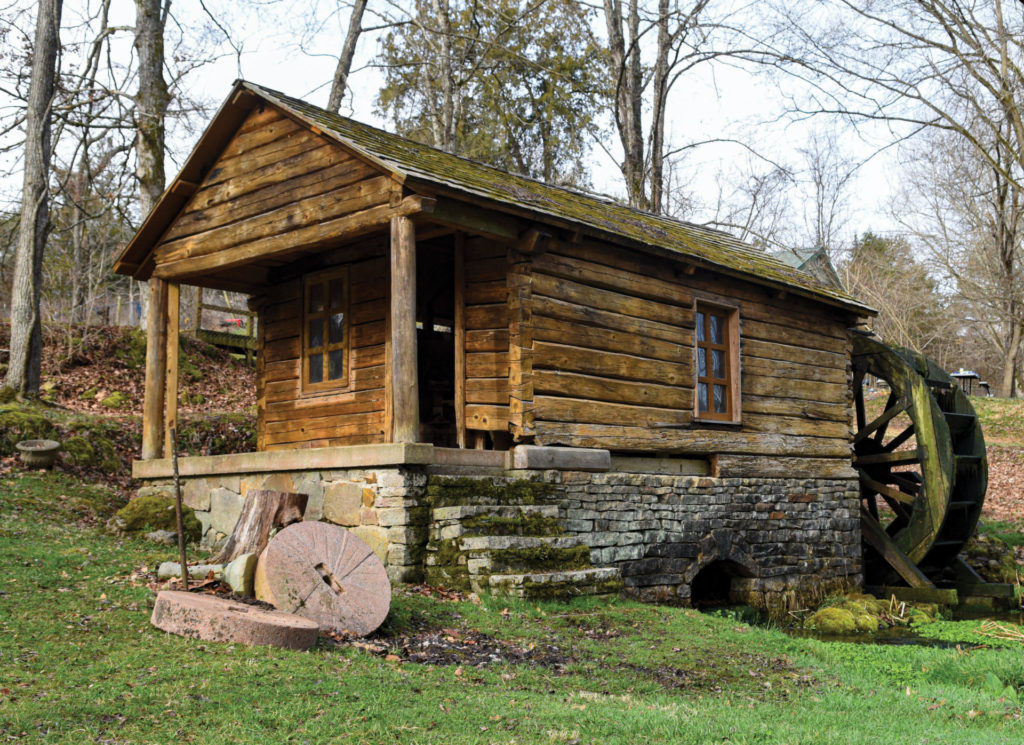 Visitors to Centerville, the county seat of Reynolds County, often pass through without knowing of the existence of this mill, which looks like a log cabin with a waterwheel attached. The present mill is a reproduction of the old mill that was disassembled and shipped to San Francisco for the 1939 World’s Fair, then became part of the Smithsonian Institution’s collection. The mill once provided electricity in the days before Black River Electric Cooperative formed. 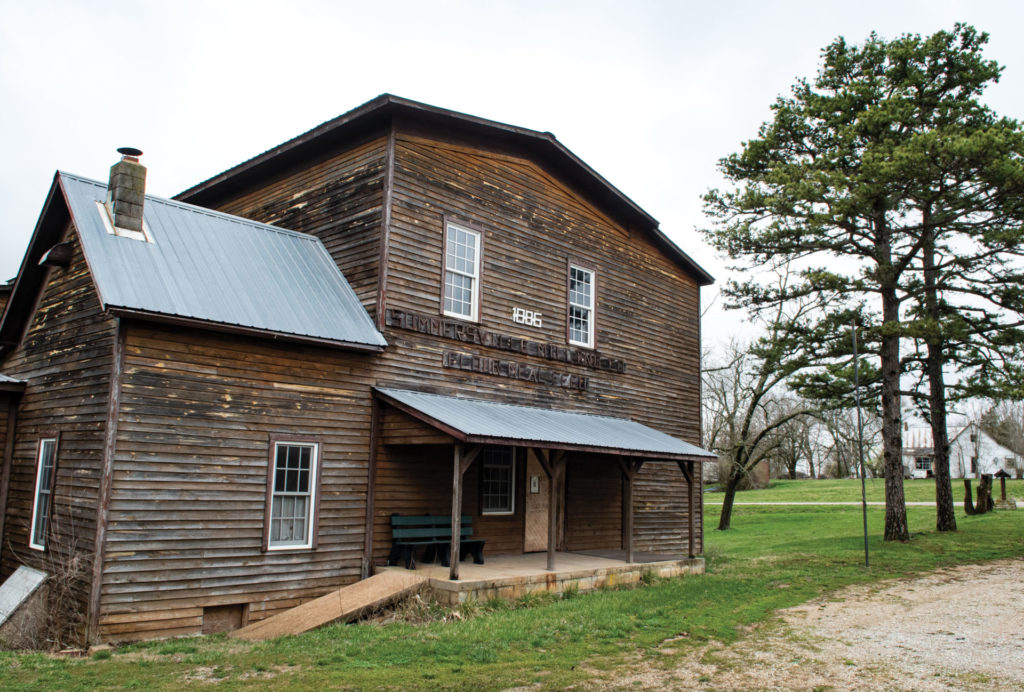 Often overshadowed by its location just a few miles west of Alley Spring Mill, this mill still has much of its original equipment. It was restored to its former glory as the centerpiece of a city park and has been used for a variety of events. This mill was powered by a steam engine that used water from the nearby pond. During its busiest period it ran 24 hours a day, seven days a week. The mill dates to 1886 and was one of several built by the McCaskill family. 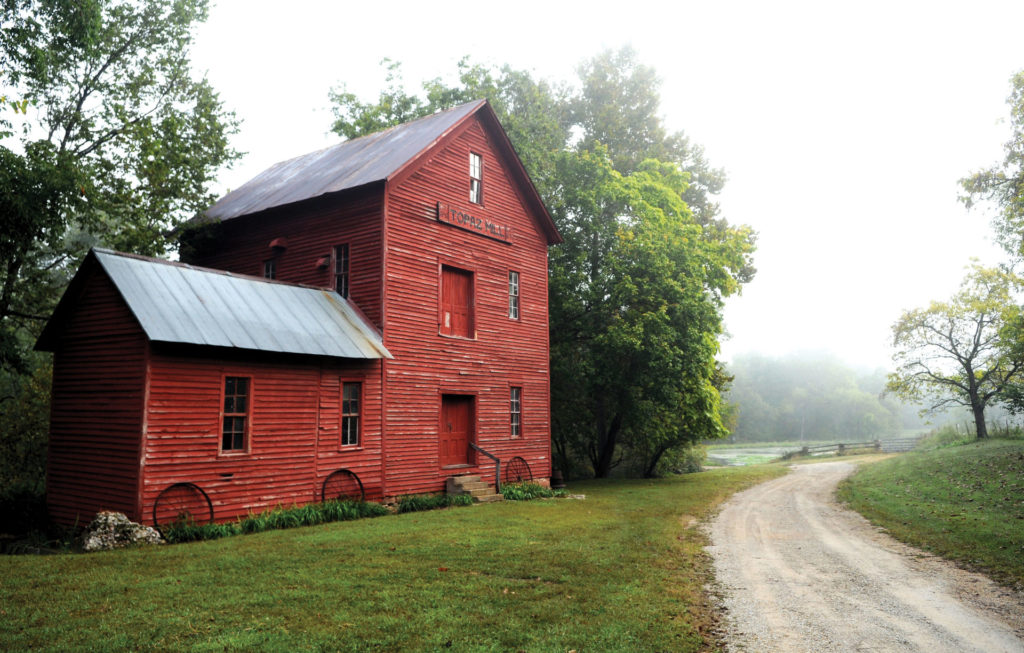 This privately owned mill and the nearby store are all that is left of the once-thriving village of Topaz located in Douglas County just south of Cabool. The mill is powered by a spring that spills 10 million gallons of water per day and was directed to the undershot water wheel by a stone millrace. The mill is in excellent condition. Visit early in the morning when it is likely to be shrouded in mist. 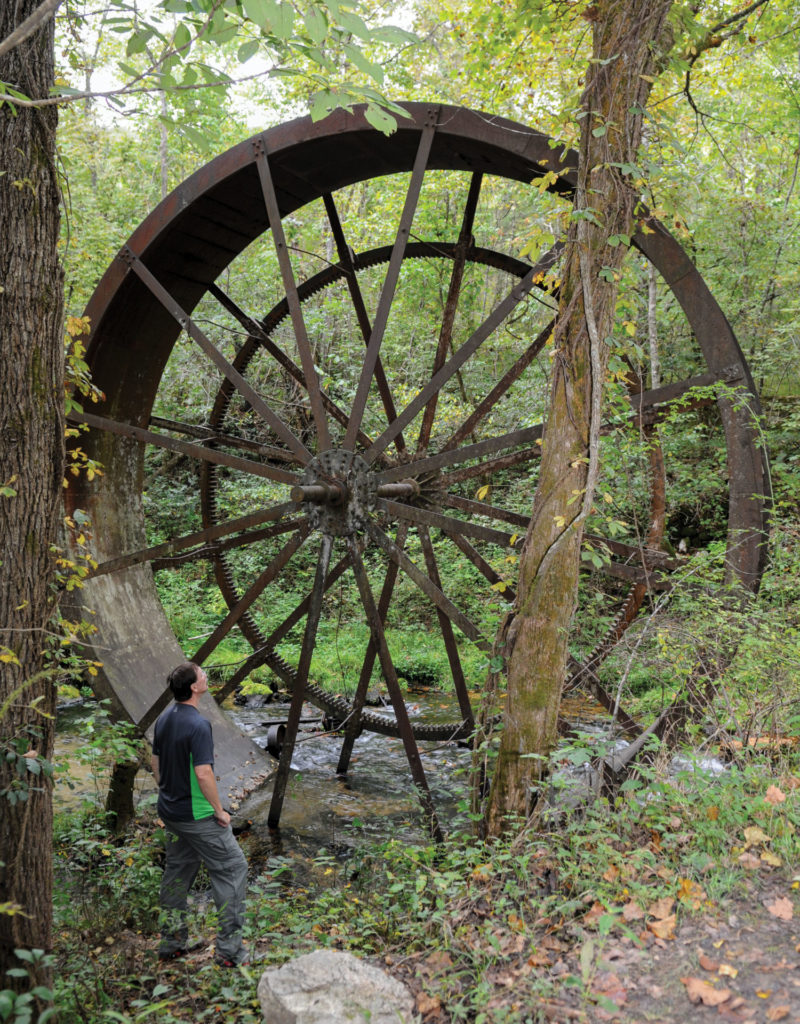 All that is left of Turner Mill is the 25-foot metal wheel that once transferred power from the spring pouring out of a small cave to the mill’s machinery. Located on the edge of the Irish Wilderness in the Mark Twain National Forest, the giant wheel should be on the bucket list of any modern-day Ozarks explorer. A Forest Service picnic area is located nearby, with a trail that leads to the wheel. Directions to this site are not in the book. From Highway 19, take Forest Road 3152 for 6 miles, then take Forest Road 3190 for another 3 miles. It can also be reached at mile 22.3 on the Eleven Point River. 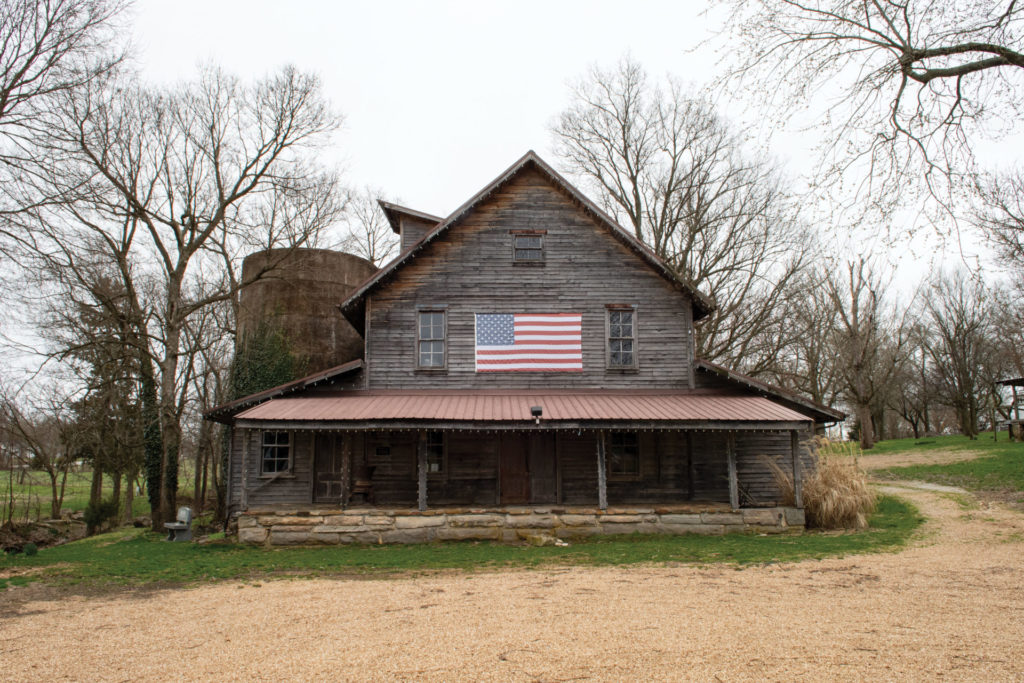 Unlike many Ozark mills, Wommack Mill is easy to access with its location near downtown Fair Grove. The stone-burr grist mill was built in 1883 and was powered by steam. Thanks to the efforts of the Fair Grove Historical and Preservation Society, the mill was restored and now serves as the focal point for the town’s annual Fall Festival set for Sept. 25-26, along with many weddings, reunions and other local events.