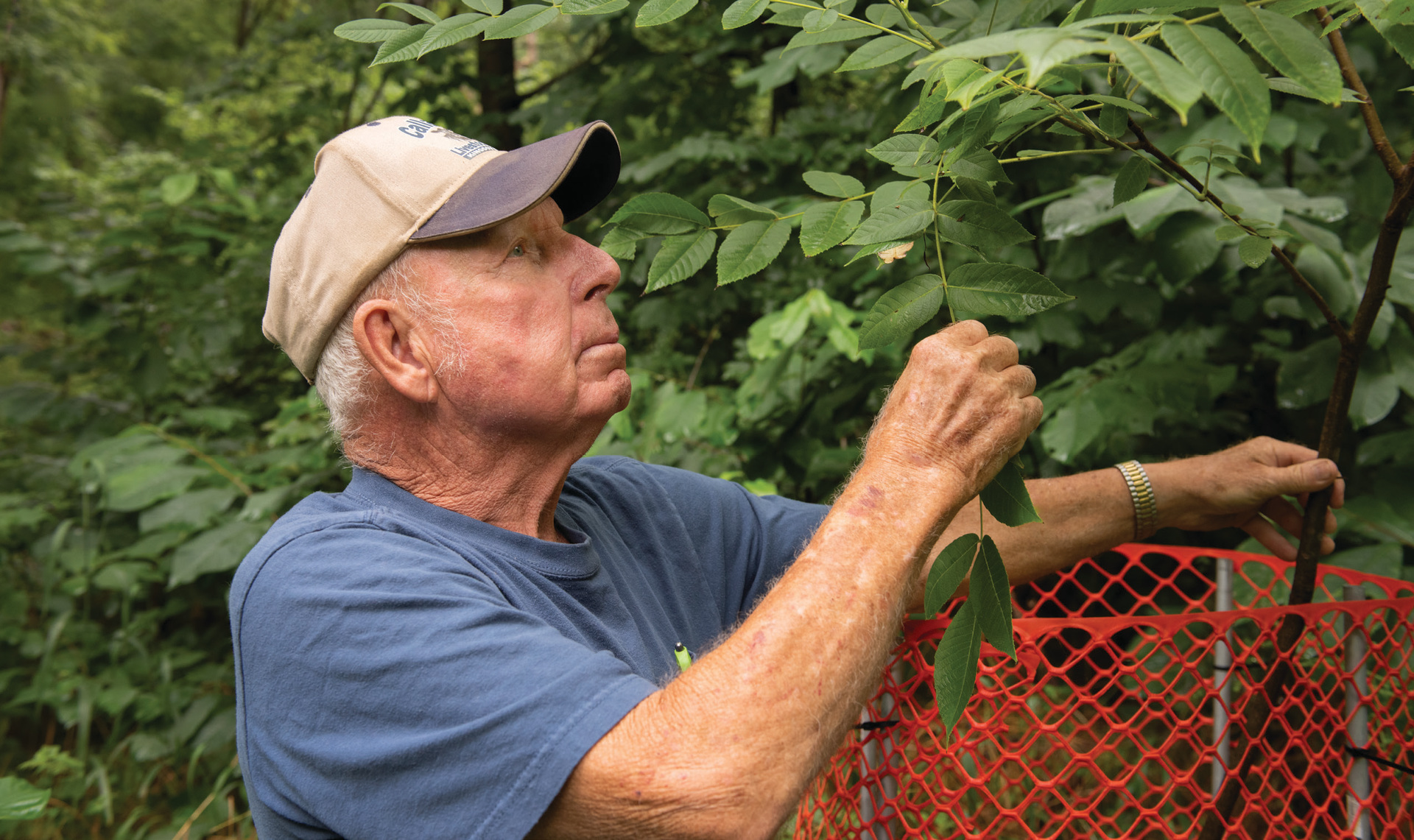 One man’s efforts to save the rare butternut

For Tom Wekenborg, checking on the tree saplings on his hundreds of acres in southwest Callaway County can take the better part of a day. It’s a humid morning and the dark sky is about to open up with a deluge. Tom jumps in his covered ATV and starts heading up rugged paths only a backpacker or mule might tackle. For many, it would seem a bit remote, but to Tom, it’s nature at its best — and a home for a tree species he’s trying to save.

“My dad moved his dairy from Jefferson City to this area when I was about 11,” Tom says, pausing to view the open expanse of the fields below. “The ladies along our milk route paid me good money to pick butternuts for them. I think I made a dollar a pint.”

Butternut is the common name for the white walnut, a relative of the better-known black walnut tree. Black walnuts are round, where butternuts are more oval in shape. While a black walnut has deep, dark-brown grooves in the bark, butternuts have a smoother, whitish-gray bark.

By the 1950s, butternut trees were beginning to be hit by a canker disease determined to wipe them out. The blight is caused by a fungus which infects the butternuts through small cracks or wounds in the bark, causing a canker — dead tissue beneath the bark. If the canker does enough damage to the tree, the tree will likely die.

The wood of butternuts was once used by furniture makers and woodcarvers. In the 1800s, people often dyed their cloth a golden-brown by using butternut hulls and bark. It’s said Confederate soldiers were often called “butternuts” due to the fact their uniforms would fade over time and resemble the homemade dye.

For this Callaway Electric Cooperative member, doing his part to stop the butternut from extinction has become a grassroots effort all his own. Each year Tom gathers any nuts he finds, hoping to salvage seed for planting.

“There’s the butternut I found when I was renovating a glade in the ’70s,” he says, pointing to the black-and-white barked tree. Its limbs are gnarled and weathered, some broken by storms, others trimmed as needed to hopefully help it live a longer life.

“This one is the oldest live trees I’m aware of in this area and I really don’t know how old that is,” says the 77-year-old farmer, patting the tree’s bark.

To his knowledge, Tom says there’s no answer to the disease attacking the butternut, and through the years, the blight has nearly wiped out the rich-tasting edible.

Tom gathered up what few nuts he could find beneath the old tree on his property. A butternut on a neighbor’s farm was near death due to grapevine stangulation, but it had dropped a few nuts, so Tom asked if he could have them, too. That was the beginning of his personal quest to save what butternuts he could for future generations.

Carefully, he stratifies the seeds — a process of treating seeds to simulate natural conditions so germination can occur. The process is tedious, but to Tom the time is well-spent to help end the plight the butternut faces. The process includes soaking, then layering the seeds in containers of sand, then placing them in a cold environment for a time so the seeds germinate.

“If I’m lucky, I usually gather anywhere from 10 to 20 nuts each fall. But one year I gathered 120 nuts between my tree and a neighbor’s, and I had right at 90 of those germinate,” he says.

Tom says he started out last year with high hopes of gathering a bumper crop of nuts again.

“I counted at least 75 big nuts on my old tree. Then it flooded and that continued into fall and I couldn’t get up to the tree,” he says. “By the time I could drive to it, the squirrels had eaten most of the butternuts. I think I found a whopping seven nuts.”

Some years, Tom says he doesn’t find any nuts at all.

“I’ve seen squirrels dig up a young seedling just to eat what little of the nut is still beneath the root,” says Tom.

Once the seeds have germinated, Tom places them in pots and gives them a little TLC until he feels they’re ready for planting. He then transplants the seedlings, careful to select a spot he feels they’ll thrive.

“I’ve been told butternuts usually like growing in narrow valleys,” Tom says. “They need a fair amount of sunlight, but I’ve seen them growing with 200-foot-high sycamores towering around them. So I’ve scattered them everywhere on my property.”

“Some years we have a lot of butternut seeds and other years, few to none,” says Mike Fiaoni, state forest nursery supervisor for the Missouri Department of Conservation’s tree nursery located near Licking.

“There’s not much to you if you don’t practice what you preach.”

The forester notes that while there were several hundred available last year, this year’s offerings may be less due to poor growing conditions for last year’s nuts.

“It would be great if someone could come up with a 100 percent butternut cross that’s resistant to the canker, but I don’t know of any efforts at this time,” Mike says. “When we do have butternut saplings for sale, they usually sell out pretty quickly. It’s great people want to help keep the butternut genetics growing across Missouri.”

Since starting his efforts six years ago, Tom has planted more than 80 saplings, each with protective fencing to deter critters from chomping on the tender leaves and bark. As for the dreaded tree canker or any other disease that tries to latch on, all Tom can do is keep a watchful eye on the trees and help them stay alive and well.

“At this point, helping them from becoming extinct is about the only hope,” Tom says. “I’ve always been told ‘There’s not much to you if you don’t practice what you preach.’ So I do what I can to help the land I’ve got.”

The Missouri Department of Conservation’s George O. White State Forest Nursery will begin taking online and mail orders for trees on Sept. 1. You can order from them online or download a seedling catalog at https://bit.ly/3gKW3LC, or pick up a catalog at your local Missouri Department of Conservation office. They recommend checking the online catalog weekly to see if any backstock has been added to their catalog list.