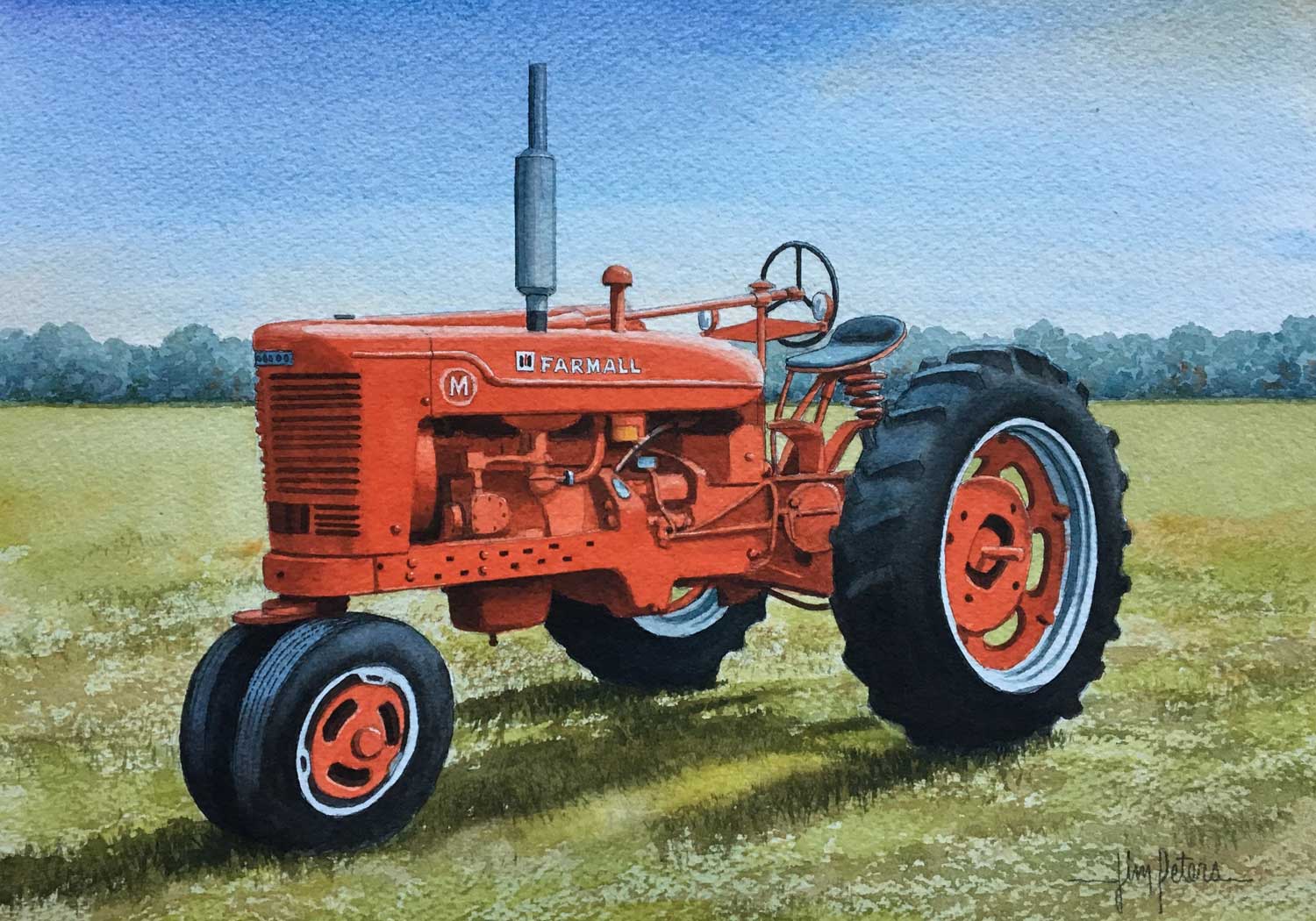 The Romance of Old Tractors

Red or green, tractors serve as emblems of an honorable life

In 1978, a man named Elmer Uchtman faced a typical but bittersweet truth. A farmer all his life, he was retiring, but his machines were not. Though his land and that of his family would continue to be farmed by relatives or renters, his implements sat idle. So Elmer prepared for the auction of the massive tools that had enabled him to dedicate his life to the soil.

Elmer owned International Harvester (IH) equipment. Like many farmers who cherish one agricultural brand above others, he showed a loyalty to
IH that bordered on the religious — or at the very least showed a wry sense of humor. Though his brother-in-law, Wilbert, farmed nearby with bright green and yellow implements, Elmer looked down on “the Green ones” — his words for John Deere. He refused to call them by name. Instead, Elmer proudly farmed with only red IH machines. He frequented Henderson’s, the IH dealer in his town, for decades. From his steadfast example, Elmer’s children and grandchildren just knew IH was the best, the toughest and the most reliable.

Elmer had two red tractors. One was a Farmall 350 and another a Farmall M. The M was the most expensive tractor Elmer ever bought, and it was also his most dependable. “My workhorse,” he called it, with no irony. More than any other item to be sold at the auction, the M would be the hardest for Elmer to relinquish.

When the auctioneer began the sale for the M, Elmer was dismayed when the bidding began to stall. He felt that the tractor would be sold at too low of a price. So he stopped the auctioneer and climbed up on a farm wagon to address the crowd.

White-haired and bespectacled, Elmer told when and where he had bought the M and how much he’d paid for it. He explained its horsepower and its reliability and what the M had been able to do in decades of farming. Then, in a nearly unprecedented show of emotion, Elmer’s voice broke. He said he’d stake the M against any other tractor. Then he got down from the wagon. When the auctioneer started the sale again, the bids went sky-high.

Elmer was my great-grandfather, my mother’s father’s father. Respected and successful in his community, Elmer likely prompted the bids for the M to start high because he was trustworthy. Heavily involved in the Farm Bureau and many other organizations, including the school board, people knew that when he said something, it was so. The bids also went up, I think, for less practical reasons.

It was no secret to most at the auction that Elmer had experienced his share of hardship. His only son, my grandfather, had died suddenly at the age of 36 due to appendicitis. So Elmer had served as a father fi gure to fi ve fatherless grandchildren. He took my mother and her siblings to the mill to sell corn and soybeans, to early morning cattle auctions in St. Louis, and bowling sessions in their small town.

And he and his dear wife of 50 years, Alma, attended the rural Lutheran church with their family every Sunday. Death and loss were hard realities, but Elmer was no whiner. Like so many before him and since him, farming continued to be not only his livelihood, but his life. Being a farmer meant living life matter-of-factly, with an unfl inching courage and humble faith.

Crops abounded and crops failed, children were born and children died. Harvests began and ended, seasons came and went and the cyclical patterns of life with the soil grounded what otherwise might have seemed an existence susceptible to terrible and terribly arbitrary events. No matter the blessing, no matter the tragedy, life went on in the fi elds, and Elmer lived, too.

Most people think of romance in terms of candlelight dinners, Valentine confessions, sweet moments under the moon. They would be right, of course. But romance developed fi rst as a means of storytelling, a form of sharing adventures involving chivalry, history and legend. Knights in shining armor rode off to fi ght fi erce dragons and awful villains. Often they fought for God or for a fair lady (or both). The best romantic heroes always strove to live for something more powerful than themselves, submitting to Providence and to miracles alike.

Farmers on tractors might seem a far cry from armor-clad champions of old. But all farmers to some degree share purpose with their romantic forbearers. They set out in faith to toil and strive, despite great hardship or sacrifi ce, because the reward is great. In our materialistic age, we too often think of reward as having to do only with money. And certainly farming can bring material riches, just as knighthood could bring wealth. But all farmers — and all knights — know there are many, many other ways to turn a profi t in this world that are much less risky and dangerous to property and person alike. Yet they continue to submit to great risks and dangers to attempt miracles — growing and raising living things in a world which does not guarantee life.

In an earlier age, Elmer would have mourned the loss of a trusted horse or horses, either from age or incapacity or death. In an age of machinery, though, his trusty ride in the form of the M was outlasting his stamina. I think at the auction, Elmer understood, at a very visceral level, that the M signifi ed his worth as a man, that it was valuable not just for its reliability and strength, but for how it represented him, Elmer, to be a reliable and strong man. And it must have been a humbling moment for Elmer, trying to articulate that worth before a crowd of his friends and neighbors, in a community bound by common livelihoods steeped in honor and fortitude. This worth is not often aired like laundry for all to see. It is a matter of the heart and soul.

And this is the romanticism of Elmer and his old tractor, the M. Yes, this is my heroic, misty-eyed view of my gentle great-grandfather. But I’d venture a guess that all farmers and those who love them share the same romantic views, even if they never talk about them. You can glimpse it, though, as a man crouches and caresses and runs his fi ngers through the soil. And you can see it as he patiently polishes and admires an old tractor.

Farmers understand tractors are emblems, tangible reminders of their dedication to an honorable, often desperate, often miraculous livelihood. “He loved that tractor,” my mother has told me. Yes, he did. And he loved more than that. He loved his family, his livelihood, his life. And in a strange but beautiful act of witness, you could see it when you saw him with his tractor. I, my husband and our children can see it, too, every time we see a red tractor, or even a green one, plowing in the fields.