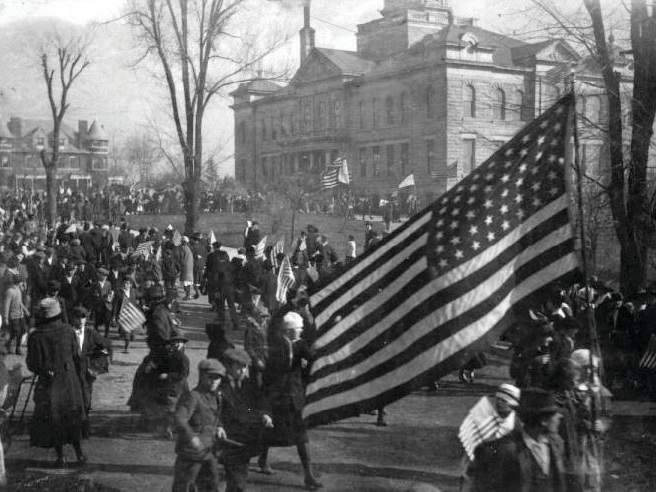 At home and abroad, Missourians were front and center for World War I

On April 6, 1917, Missourians and their fellow Americans found themselves at war. For the previous three years no one in Missouri, or anywhere else in the nation, wanted anything to do with the hideous slaughter pen that World War I had become since the conflict had erupted in 1914 between England, France, Russia and other Allies against Germany, the Austro-Hungarian Empire, the Ottoman Empire and other Central powers.

At the war’s beginning, there was no military-industrial complex (almost all artillery and arms used by Americans were provided by the French or British). In early 1917, the U.S. Army consisted of only 133,000 soldiers. A massive mobilization of men was required.

Two Missourians played key roles in creating this new fighting force. Gen. Enoch Crowder, born and raised in Edinburg, Grundy County, was tasked with implementing the Selective Service Act. Within two months of the declaration of war, he oversaw the registration of 10 million men. Within a year, a military force was assembled consisting of 2 million men. Three-fourths of them were draftees. A quarter of a million Missouri boys registered for the draft. Ultimately, 174,000 Missourians, both volunteers and draftees, served in the armed forces during the war.

To lead this massive army, another native Missourian, Gen. John J. Pershing, was tapped. He grew up near Laclede in Linn County. In 1917, Pershing was appointed to head the American Expeditionary Force in France. On his arrival in France, he paid his respects at the tomb of the American Revolutionary War hero, the Marquis de Lafayette. Pershing proclaimed, “Lafayette, we are here.”

A little over a year after the declaration of war, American doughboys saw their first action against the Germans at Chateau Thierry, just 59 miles from Paris. The hard-pressed French appealed to Gen. Pershing for assistance in beating back the enemy assault. Pershing detached two divisions of American soldiers to fight with the beleaguered French defenders. Some of the bloodiest combat came at a place called Belleau Wood. Marine Lt. Frank Becker, a Fulton native, was in this battle. At one point, during a German night assault he recounted, “We heard German … command[s] and opened up with our machine guns, etc. and stopped them dead in their tracks.”

However, the Germans were well dug in at Belleau Wood and mounted a fierce resistance. By June 6, 1918, 60% of the forces Becker fought with were dead or wounded. Ultimately, the German attack was repulsed by the “Devil Dogs,” as the Marines came to be known. The hard-fighting Marines received much credit for saving Paris from German occupation. It came at the cost of nearly 10,000 U.S. casualties. The French later renamed Belleau Wood, “Bois de la Brigade de Marine” (“Wood of the Marine Brigade”), and Pershing referred to it as the biggest U.S. battle since Appomattox during the Civil War.

On the home front, Missouri joined the nation in a massive mobilization of the civilian population to support the war effort. The general assembly of Missouri did not hold a legislative session during 1918. As a result, Missouri’s war effort was carried forward by citizen volunteers at every level from state to county to towns and townships.

The Missouri Council of Defense coordinated the operation. The most urgent priority, in order to help finance the war, was the sale of war bonds. Between 1917 and 1918, there were four bond drives. Although Missouri met all of its war bond quotas, it was not without a considerable amount of arm-twisting.

The worst fate for a Missourian was to be called a “slacker.” This ignoble title could be earned by not purchasing war bonds, refusing to sign a Hoover food conservation pledge, not registering for the draft, not having a victory garden, failure to plant a necessary crop such as wheat or uttering any word that could be construed in any way as disloyal or unsupportive of the war effort.

Missouri’s large German population came under suspicion, although they had resided in Missouri for generations in many cases. Missourians of German descent often had ancestors who had helped keep Missouri in the Union during the Civil War; they felt no need to defend their patriotism against Anglo neighbors whose ancestors were frequently Secessionists! Still, the spotlight of distrust shined on such practices as speaking the German language. Many, but not all, German-language newspapers ceased publication or switched to English. Secondary schools were pressured to cease teaching the German language. Time-honored German festivals had to be canceled or given a patriotic spin. Despite much public pressure and a few negative incidents, the continued use of the German language as well as customs managed to survive the war.

In late September 1918, the Allies teamed up for a final offensive to defeat the Germans. Along the whole Western Front they pushed forward. Pershing’s troops captured a long held salient in the German lines called St. Mihiel. Participating in this attack was the 89th Army Division, which was composed of Midwestern draftees, including many Missourians.

Pershing then led his all-American army into the Meuse Argonne sector of the Allied line. Here his soldiers were sandwiched between the rugged and heavily defended Argonne forest and the unfordable Meuse River. Pershing hoped to gain 10 miles of enemy territory on the first day of the attack. But he greatly underestimated how well the German machine-gun nests and artillery were dug in to defend the rough and difficult ground over which the American doughboys had to advance. Ahead lay 47 days of brutal combat.

Among the first units to push off against the Germans was the 35th Division, made up of Missouri and Kansas National Guardsmen. At the end of the first four days, the men of the 35th fought their way forward 6 miles. This came at a catastrophic cost. Half of their men, including many officers, were dead or wounded. They had lost contact with their leaders and became disorganized. As they fell back in confusion, effective artillery fire from a battery of the 129th Field Artillery, led by Capt. Harry Truman, covered their withdrawal.

Finally, by the middle of October, U.S. forces started to breach the Hindenburg Line. German defenses began to give way, and by the end of the month their fighting spirit started to crack. On Nov. 1, the Midwesterners of the 89th Division joined the fight and helped advance the line nearly 5 miles in a single day. America’s casualties for just six weeks of fighting were 26,277 killed, 95,786 wounded. Among these casualties were 11,172 Missourians.

On Nov. 11, 1918, at 11 a.m., an armistice was signed ending the war. President Woodrow Wilson had taken America into a war on foreign soil to “make the world safe for democracy.” But Wilson’s plan for peace was rejected by the rest of the victorious and vindictive Allies. Wilson’s dream of a League of Nations, along with the Treaty of Versailles, was defeated by the U.S. Congress, including members of Missouri’s congressional delegation. Missouri and the nation were not the benefactors of “a war to end all wars.” Instead, they inherited another far more devastating world war.