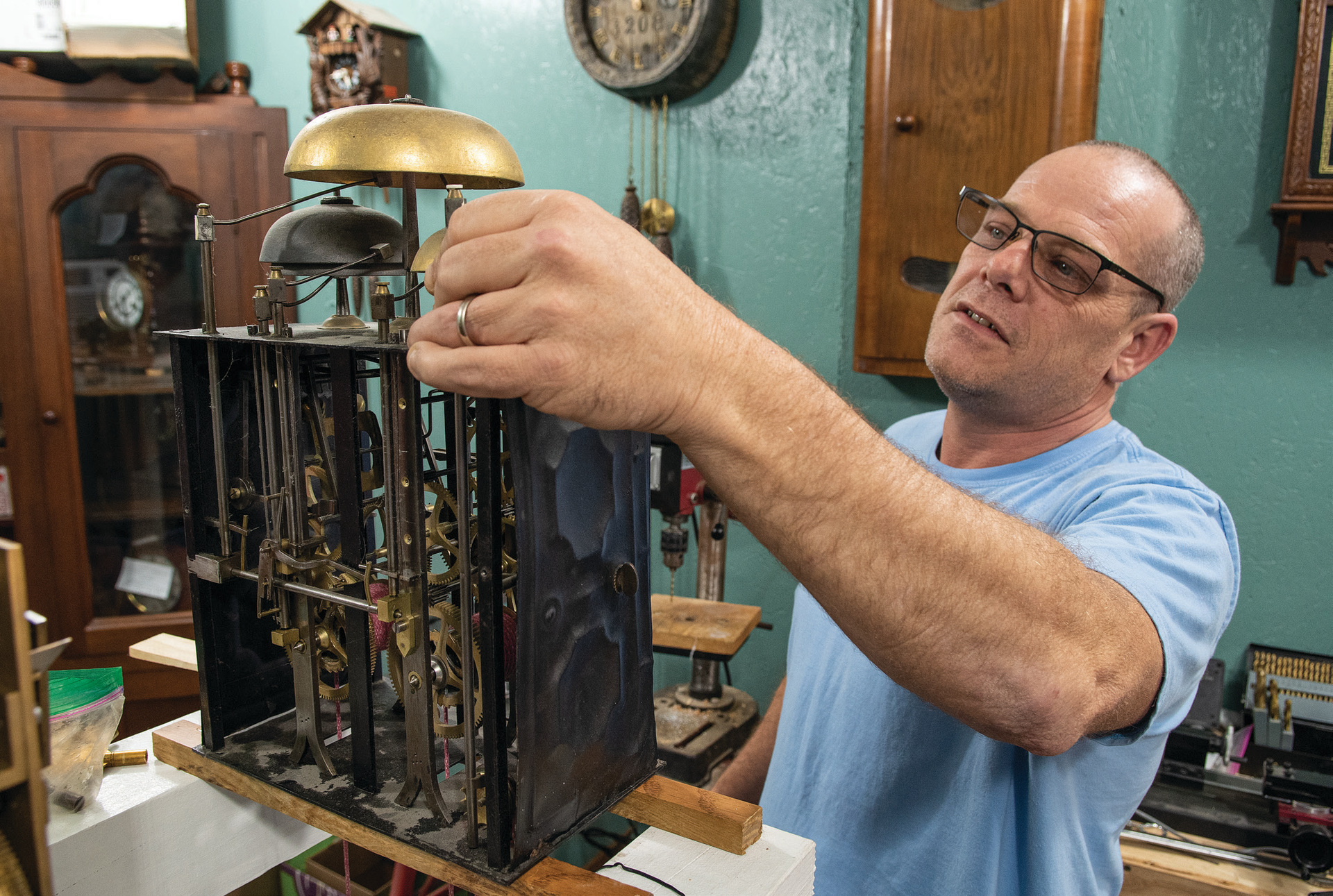 S&N Clocks puts the tick-tocks back into clocks

They hang on walls, perch on mantels and form the focal point for a room. For centuries clocks in all their forms have been marking the passage of time with a solid tick-tock. But with each beat of the mechanism, the stress of the springs and weights pulls against the gears. Eventually the tiny bushings wear, a torqued axle snaps in half or maybe a spring grows weak and breaks.

Then the measured beat falls silent and the hourly chimes sound no more.

Ironically, time is the worst enemy for these keepers of the hours and minutes, precious heirlooms passed down for generations. Once every small town had a clocksmith whose job was to put these complicated clockworks back into service. Now they are becoming fewer and farther between.

Business is good for those who remain, and that’s why Sean Barnes wakes at 3 a.m. to get a head start on a typical day at S&N Clock Repair in Cape Girardeau. This family business includes Sean’s wife, Nancy, and son, Dylan, who together keep a steady stream of rebuilt clocks moving out the door.

“It started as a hobby,” Sean recalls of his entry into clock repair. “I started with cuckoo clocks, that’s what I learned on. Then I kind of went up from there. One day, I was working on them and I had them in the house then. My wife said, ‘you’ve got to stop.’ She said we were running out of room.”

Sean’s fascination with clocks had grown so much that the collection was out of control. “I don’t even know how many he had,” says Nancy, continuing the story. “More than I can remember. Close to 100. We have over 200 in our personal collection now. We feel that every room needs a clock. Or several clocks.”

Sean takes over, saying, “Me being me at that point in time, I said, ‘I’ll show her.’ So, I started working on them for other people. Then I started making more money at that than my desk job. And one of the girls where I worked asked me, ‘What are you doing here?’ And I told her, ‘I don’t know what I am doing here.’” 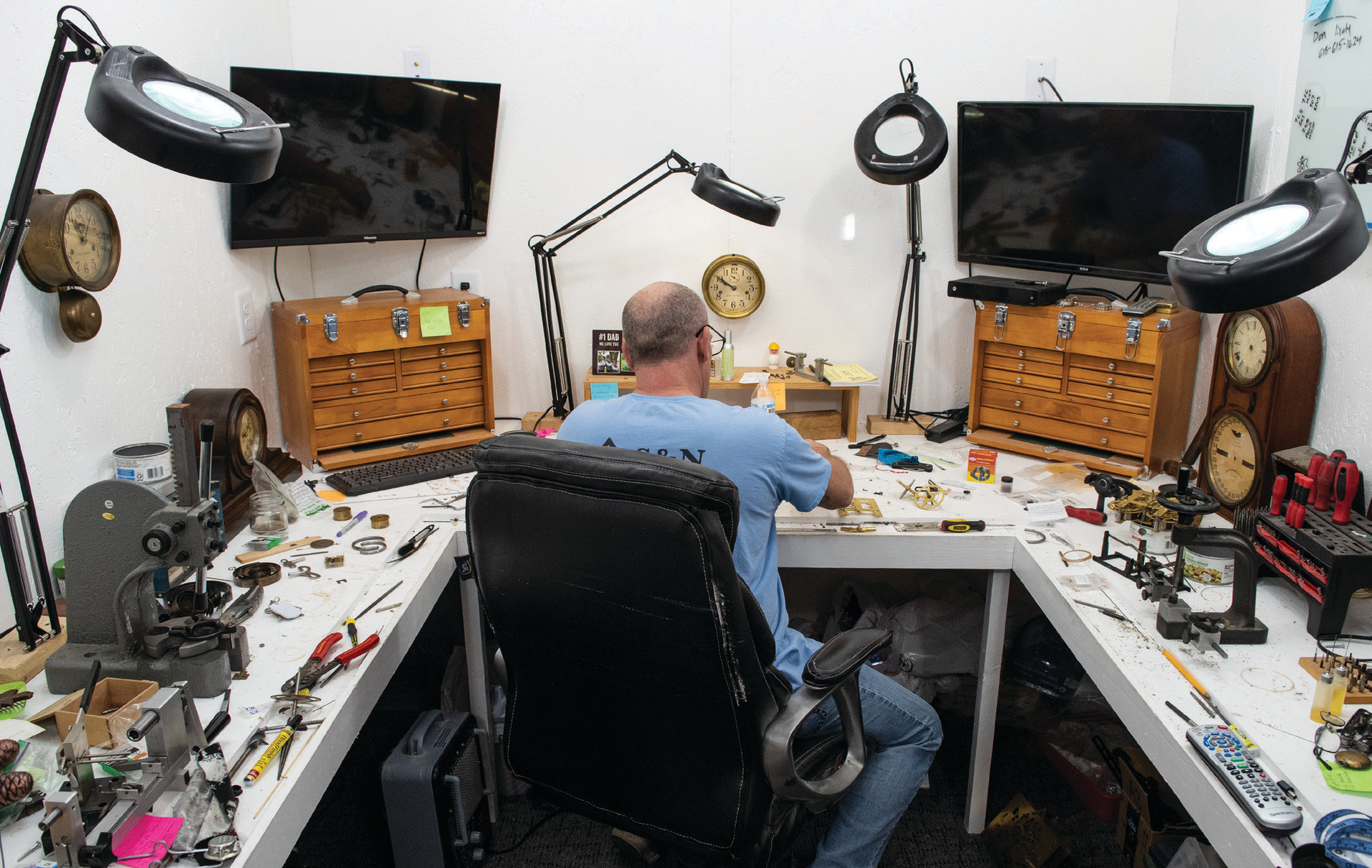 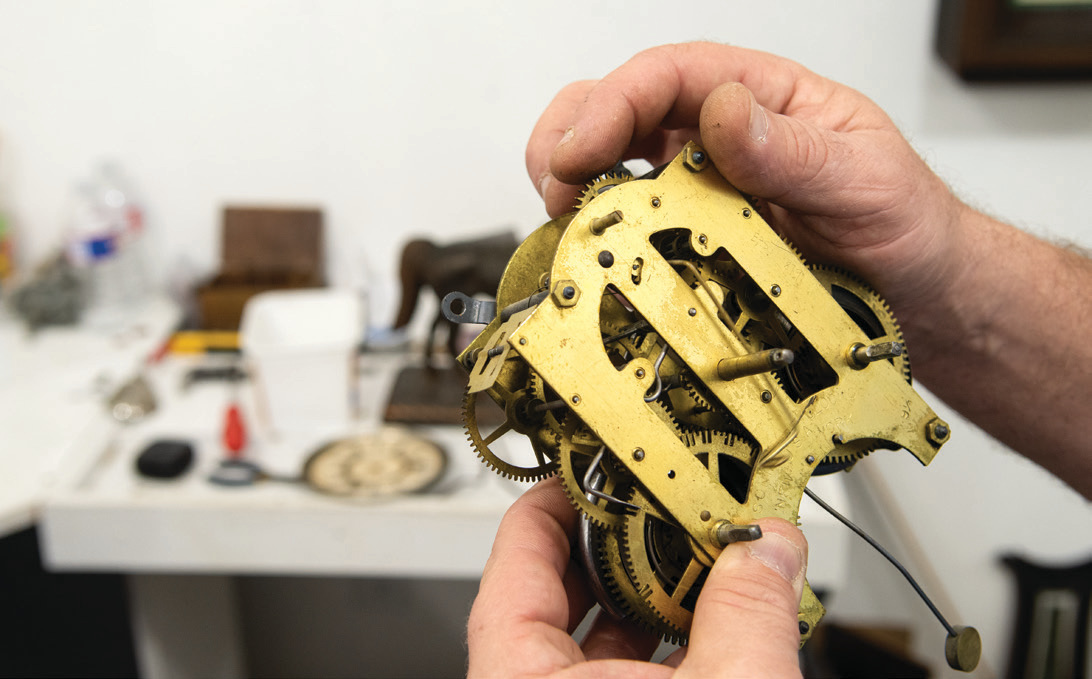 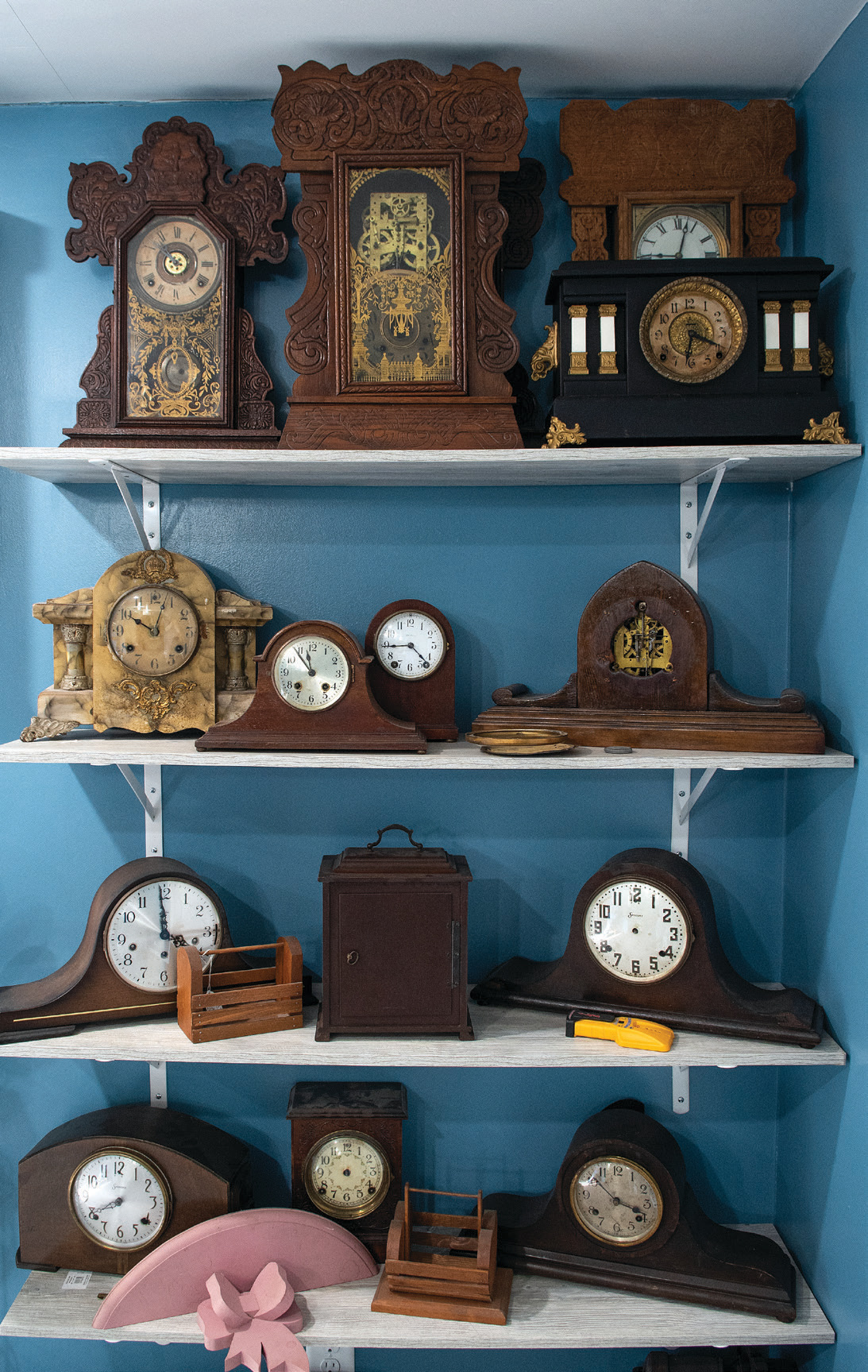 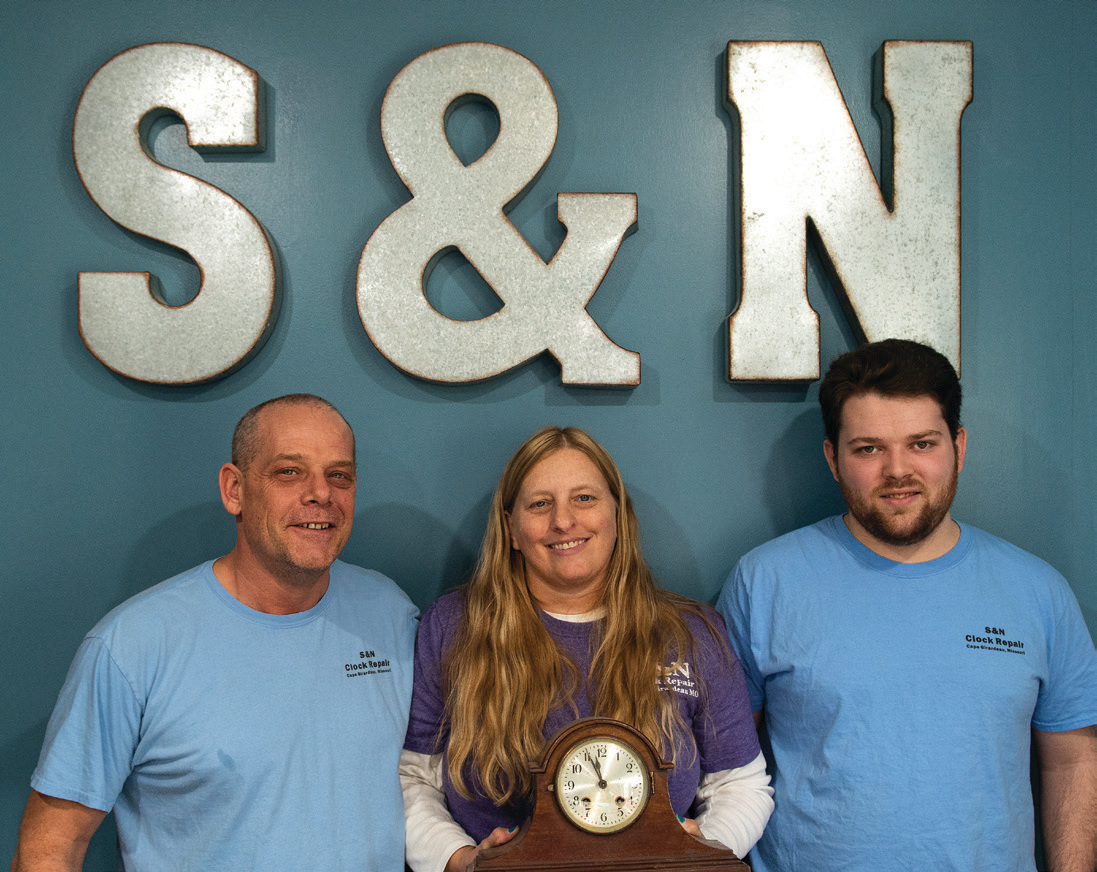 The couple talked it over and decided Sean’s skills were better suited to fixing clocks than doing inventory for a packaging company. “He came home and we talked about it and I said, ‘you are never going to know if you don’t try,’” Nancy says.

S&N Clock Repair officially opened Sept. 1, 2017 and has never seen a slow time. “We get that a lot: ‘I’ve been looking for someone for years,’” Sean says. “This is supposed to be our slow season, technically, but it’s not. It hasn’t slowed down. We got three calls this morning. We got 11 clocks in this past week.”

The owners say they never know what will walk in the door or what that clock will need. Sean proves this by pointing out some of the dozens of clocks in need of his skills. Each one has a story.

On a wooden rack is a rare movement powered by heavy weights. “This guy is so old that when he was made, people wore pointy hats and were mad at the British,” Sean says. Where most clocks this size have gongs, this one has bells. And where others might chime the hour and half hour, the French makers added notes on the quarter and three-quarter hour and it counts out the hours twice.

On another wall hangs an obviously homemade case. This one is a real survivor. “He was in London,” Sean says. “When the Blitz was going on, the Battle of Britain, it got bombed out. The lady said her family made a new case for it and they put the movement in the new case. So, it’s a homemade case with the old movement. It would have been an ornate clock. It’s what we call a spring-wound Vienna regulator.”

On his bench, the movement from an Ithaca Farmers Calendar Clock has been repaired so well it is ticking outside the case. This clock features a timepiece and a separate movement that moves rotary dials telling the date, day of the week and month.

Sean moves on to an unusual tall clock. “This one was made by John Getz in Munich, Germany in 1930. This was a handmade case. He had gone to Gustav Becker and bought the movement. He apparently was a cabinetmaker or a casemaker. This would have been an even higher end than the Gustav Becker — and Gustav Becker was pretty high end. This is one of a kind.”

The grandfather clock features wood inlays across its surface. In some places the veneer was bookmatched so that the pieces mirror each other.

There’s a pair of ship clocks, one telling normal time and the other sounding out the bells of a ship’s watch. Another clock has a glass panel advertising the “comfort and security” of a Dobbs truss.

As the minutes go by, the constant ticking of clocks is interrupted by the deep-noted gong or cuckoo as another clock — set to different times no doubt for sanity’s sake — reaches the hour.

“It’s kind of cool because of some of the stuff that comes in,” Sean says. “Some are dream clocks, stuff I only dream of getting. I get to work on them, play with them for a while. They get to live here for a while and then I send them home and wait for the next one.”

After repairing thousands of clocks he has developed a process to get them fixed and back to their owners quickly.

“Generally, our system is they come in and they get tagged, Nancy takes care of all that,” Sean says. “They go either in waiting, or Dylan pulls them and then he takes them apart. He does the cleaning. They make it to my bench, I repair them, put them back together, set them, test them and they go out the door.”

The most common problems are works gummed up from dust and oil or movements that have just worn out. After a chemical bath and cleaning with alcohol, Sean can inspect the movements to see what the problem may be. He points to the egg-shaped holes on one movement. This will be rebored and a bushing will be installed.

When parts break, Sean stocks common replacements or he can make a new one using a pair of lathes and a milling machine. “It’s not just taking them apart. You have to be able to repair the stuff. And a lot of times you have to make the part.” He prefers repairing to replacing.

Before the many tiny gears are reassembled each axle is burnished, most on a precision Swiss-made machine. For older clocks Sean will do the burnishing by hand. He can make gears, cap broken shafts and replace the tiniest pins that hold things together.

In all his years repairing clocks, Sean has only had one that defied his efforts. That was a battery-operated movement that couldn’t be disassembled.

For most repairs Sean charges a flat $200 fee. Costs vary for a clock that needs a complete restoration. He makes house calls within reasonable driving distance from Cape Girardeau. For most grandfather clocks he will pull the movement, take it to the shop, repair it and reinstall.

For his efforts, Sean has witnessed grown men cry when they see their timepiece once again ticking away. You could say this is one business that has time on its hands, figuratively and literally.

You can contact S&N Clock Repair at 573-270-0897, www.snclockrepair.com or find them on Facebook. The business is located at 512 Rolling Hills Drive in Cape Girardeau. Besides making repairs, they also sell clocks and clock movements.