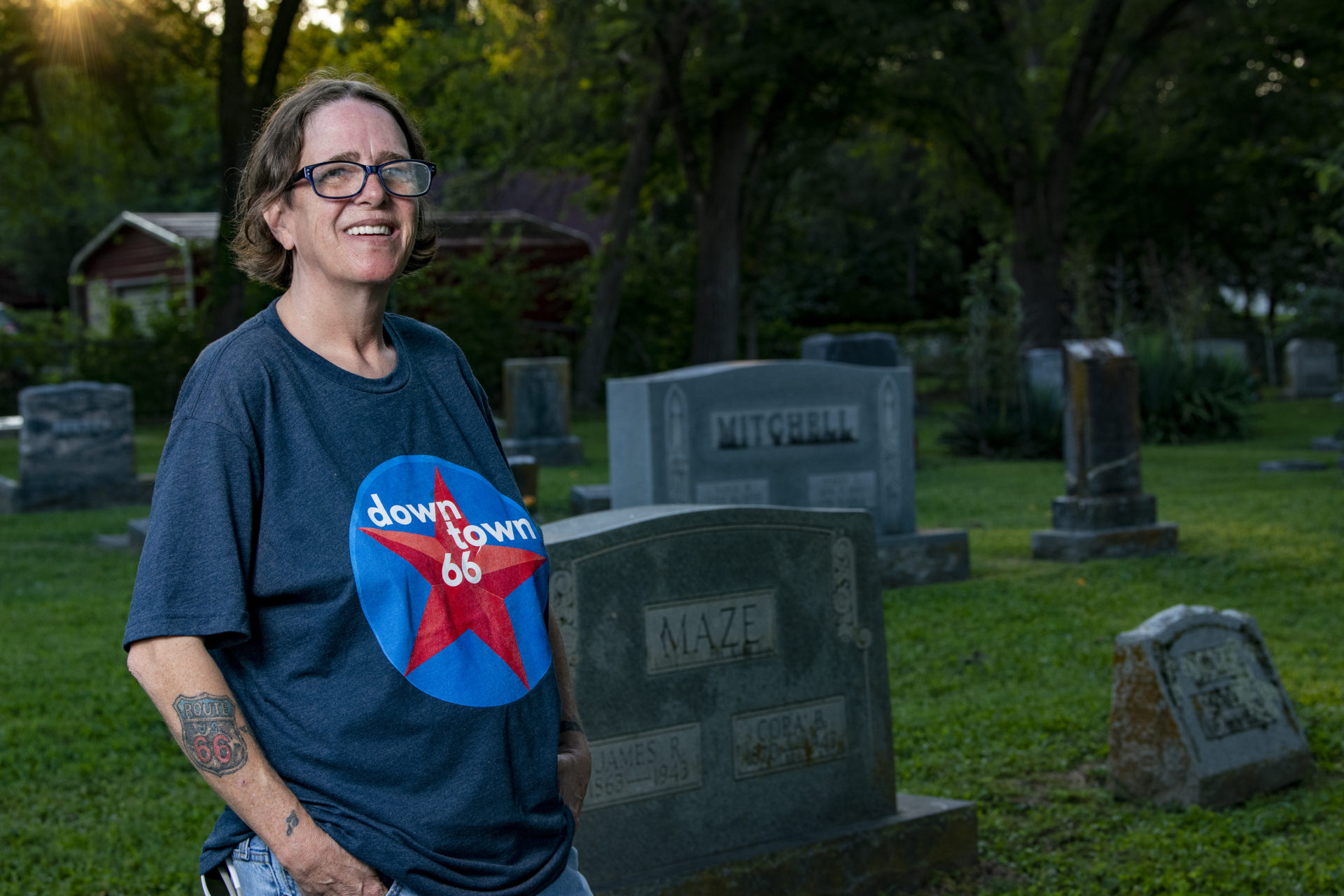 Drive through downtown Waynesville, cross Roubidoux Creek and fronting the neighborhood of Bell’s Addition you’ll find yourself at Mitchell Cemetery. On Saturday mornings, this also is where you’ll find Laura Abernathy Huffman. Over the course of an hour, she’ll introduce you to a cast of characters that have over the years become her familiar friends. There’s the doctor who redeemed a checkered past, the community pillar who shaped the town into what it is today and a young widow from the Philippines who survived a hard life in a new country so her family could thrive. Laura knows them all and rarely must glance at her stack of notecards as she tells the story of each.

“Sometimes I feel like I know these people better than some of the ones I hang out with today,” Laura says with a laugh. “It’s a little harder to hide your secrets after you’re gone.”

The local historian was drawn to the cemetery, named after the 19th-century landowners, more than a decade ago while researching the location of the Pulaski County Poor Farm and its cemetery. Spurred by her own curious nature and partially inspired by the tours given at Bellefontaine Cemetery in St. Louis, Laura pieced together the stories behind the stones.

“They do a really good job of bringing that history to life and telling those stories so that it’s all passed on,” Laura adds. “I want to have conversations with people to tell the history so that more people are aware of it.”

It’s no surprise that a military community would honor their fallen soldiers, but Waynesville’s residents did so even before the establishment of Fort Leonard Wood. Such was the case with Alfie Colley, a corporal in the 38th Infantry Regiment who survived the Philippine-American War only to contract an illness and die aboard his transport boat. A member of the Woodmen of the World Life Insurance Society, his impressive marble monument was crafted in Lebanon and attracted as many attendees when it was unveiled in 1901 as had Alfie’s funeral the year prior.

Another veteran of the war, Louis Zeigenbein, made his way to Pulaski County with his new bride, Potenciana, and budding family. Louis also met an untimely fate shortly before Christmas 1908, leaving behind a young widow and their children. Rather than return to the Philippines, Potenciana set to work as a laundress. She earned enough money over the years to add to her husband’s landholdings — a road in St. Robert still bears the family name — and her descendants would go on to form community businesses that still operate today.

Laura pauses and pats the stone in a way of greeting another resident whose name lives on in the Waynesville area: Lavega Tyce. After narrowly avoiding a prison sentence in his younger years for the murder of a Sedalia dance hall owner, Lavega went on to medical school, moved to Waynesville and made enough of an impression on the residents that Laura has tracked down as many as three later Pulaskians apparently named after the town doctor.

“It’s a true story of redemption,” Laura adds. “He had a rough start at 18, but ended up being an outstanding member of the human race who was admired by the people of the area.”

Buried at the back of the Mitchell lawn, just across the fence from the subdivision that bears his name, is Robert A. Bell. The proprietor of the iconic Bell Hotel, Robert championed the building of Route 66 through Waynesville. Later, as mayor, he shepherded the small village of 300 souls through its seemingly overnight transition into a major military installation. He went on to serve as a judge and helped develop residential areas for the swelling community. His lifetime of public service was perhaps best summarized in a tribute by his former clerk, Olive Brown: “He was the type of man with an interest in the affairs of the state and nation, but was most interested in the local affairs of his community, regardless of what level they were on.”

Although Laura never met Judge Bell, his sense of guardianship for Waynesville seems to have rubbed off on the Zalma transplant. When she’s not giving Tombstone Tales tours, Laura is likely to be found somewhere along Route 66 making a video for her YouTube channel, Downtown 66, where she examines pieces of Pulaski County history. Whether it’s a trip down to Roubidoux Creek to see the old wagon crossing or a livestream discussion on “Waynesvegas” — Laura’s forthcoming book on the town’s transitional period in the early days of Fort Leonard Wood — the channel is another way for the historian to dig deeper into the days of Waynesville past and uncover its characters along the way.

“I love a good mystery,” the researcher says. “To me, sometimes it’s one big scavenger hunt. I’m just going to keep following the journey and see where it takes me.”

For more information on Tombstone Tales, contact Laura at rubydewcreativehouse@gmail.com or subscribe to Downtown 66 at www.youtube.com/downtown66. Tour times and ticketing information can be found at facebook.com/downtown66mo. Private group tours can also be arranged.