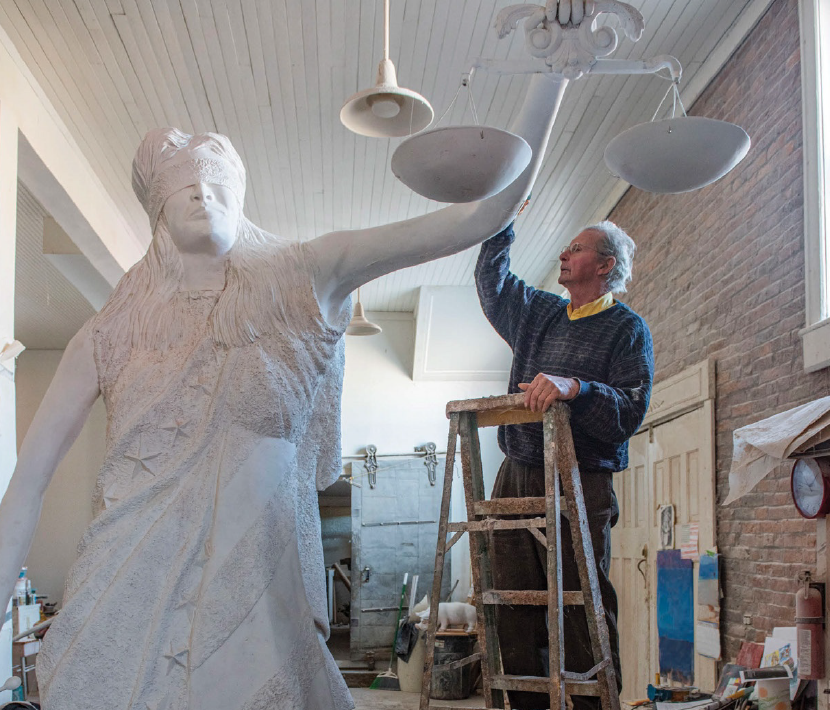 Arobed form stands in one front window holding a large electronic star while an 8-foot-4-inch-tall red dragon blows fog upward. A kite-shaped window placed in a wall boasts 3D dogwood flowers in its pattern and a 7-foot-tall dog barks at all who pass him. All that exists under the watchful eye of a large flying pig hanging from the tall ceiling. It’s a place sure to mesmerize children and adults alike.

“I look at art as creating the world I love,” says artist Brian Rance, owner of Tower House Studio in Galena.

Many Branson travelers have seen his work without knowing it. Elaborate backdrops at the popular Sight & Sound Theatre, Silver Dollar City, Branson Belle as well as entertainment theaters in the area were created by Brian. National clients include Hobby Lobby, Dollywood Theme Park and Southwest Airlines.

His British accent tells you right away he’s not from the area, yet Brian’s been a resident of rural Missouri for 35
years.

Born north of London in Hertfordshire, England, Brian worked as a London advertising artist for a local newspaper
in the late ’60s after graduating from college. One day while heading to work, he noticed a new high-end hotel going up named The Churchill. On a whim, he stopped to ask the project supervisor about submitting artwork for the hotel and was invited to offer pieces for consideration.

“Amazingly, they accepted my work samples. I was just a hard-working bloke who liked creating art,” recalls Brian, 73. “I was only 23 and overnight my world changed completely. The press took a big interest in me because I found success so young.”

Knowing nothing about the theme the hotel desired — falconry — Brian studied the bird family extensively at a local museum and completed eight pictures in six months to complement the opulent gilded decor of the hotel. The life and work of artist Brian Rance Brian Rance stands beside a sculpture which has a sensor to alert the dog to bark when someone walks by.

“Soon I was being interviewed about my work and getting commissions from other hotels and businesses for large framed pieces, as well as ceiling and wall murals,” he says. “It was quite a rush.”

In 1974, Brian made his first trip across the pond to the United States to do another series of paintings for the Lowes hotels of New York. Enamored by the new world he found himself in, he set out to see every state, painting whatever caught his artistic eye.

“I’ve seen the Andes, traveled the Amazon and worked for circuses,” he recalls. “I’ve met people who’d never seen other humans besides their own tribe before. The world is an amazing place, full of visions to paint and create.

“I played harmonica and sketched to make money as I traveled,” Brian says. “That’s not everyone’s ideal life, but I would do it over again, if I could.”

Eventually his travels led him through the Ozarks, where he fell in love with the beauty of Missouri. He eventually purchased a condemned 1890s two-story general store and began restoring it himself. Brian named the building Tower House Studio.

The large open downstairs area allows him to paint, work on sculptures and backdrops when commissioned while the
upstairs is an open loft apartment where he lives. The large space, with an expansive wall area, has allowed him to work on dozens of touring shows such as “Beauty and The Beast,” “Into The Woods,” “Little Mermaid” and “The Promise”.

He says when he works on backdrops he usually doesn’t read the script first, just listens to what the director wants so he can interpret that and make a functional, good looking piece. “I just let my imagination run with the idea,” says Brian. “That method has always worked for me.”

Most days now find Brian working in his Galena studio, usually on large sculptures, but you can see art from throughout his life framed and hanging on one large wall. The small entry room showcases some of his unique sculpture work. His most recent piece is ready to head to a foundry to be cast upon purchase.

“I call her Lady Justice,” he says of the 9-foot-7-inch figure standing in the studio. “I created her on speculation in hopes someone like The American Bar Association or a state capitol, courthouse or law school might purchase her.”

The giant dog sculpture and red dragon currently greet guests in the front entrance of the studio. “The dragon is also a rocking chair. There’s usually a line down the street at Halloween when the dragon is really spewing smoke. Everybody wants a photo taken with it.”

His sculpture, Angel at Patmos, stands in the front window and usually puzzles people, according to the artist. “It can seem a bit ominous or odd until I explain what it represents to me. It’s a little deep.”

Brian says the figure is based on the angel in the Bible who comes down to visit John as he wrote the book of Revelation while on the Island of Patmos. “In my interpretation, he’s offering mankind technology for better or worse. It’s a symbolic piece. Some people like it and some don’t, and that’s OK,” Brian says.

Sometimes he’s asked to speak to a college art class or visit with students about creating set designs and he’s glad
to do so when he’s available.

“I don’t have children, so talking to young adults who want to learn about what I do is great fun for me,” the artist
says.

Since Brian lives above the studio, he’s happy to have visitors but asks that they call first for an appointment. Occasionally he will even sell a piece or a print for framing, if the right price can be agreed upon.

“I must say it’s been great to have a career that hasn’t ever felt like a job to me,” Brian says.

Check out Brian Rance’s artwork at www.brianrance.com. To visit the studio, please call for an appointment at 417-357-6168 or email him at towerhousestudio@gmail.com.