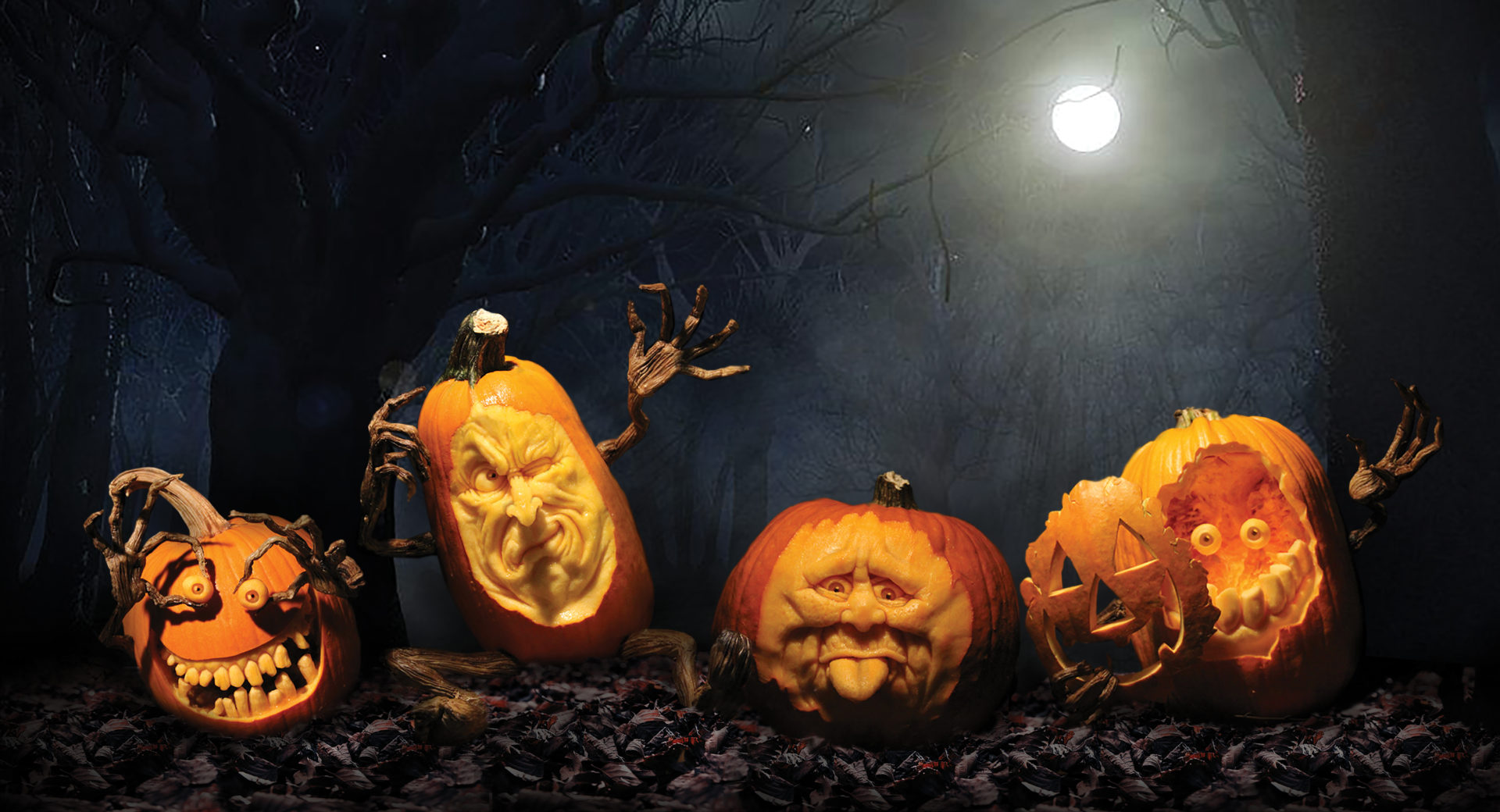 Carving imagination to life with pumpkins

The contorted reflection stares back, pauses, then smiles. One eyebrow raises as the opposite eye closes tightly, as if wrenched in pain. Mike Brown turns to pick up a small tool and begins to peel layers of pumpkin flesh, roughly marking where brows, nose and chin will soon be. Then the carver peers back into the mirror by his workstation and sticks his tongue out wildly like lead singer Gene Simmons from the rock band KISS.

“A lot of this starts with a mirror,” says Mike, owner of MB Creative Studio in Springfield. “Watching muscles move when I make faces is one of the ways I can see what I’d like my carving to end up looking like.”

A design architect by trade, Mike says carving pumpkins is similar to his day-to-day job.

“I do hyper-realistic models and animations for interiors and exteriors of businesses and homes,” says the Ozark Electric Cooperative member. “It’s pretty much the same thing when I sculpt pumpkin. I’m working with a three-dimensional object.”

The 35-year-old Missouri native didn’t grow up creating ornately carved pumpkins. But about 10 years ago, a friend showed Mike some photos of 3D sculpted pumpkins and that was all it took to get him hooked.

“Those pumpkins were carved by a guy named Ray Villafane and he’s known for turning pumpkins, potatoes and anything else into realistic works of art,” Mike says of the Arizona artist he now calls one of his sculpting mentors.

After seeing the images, Mike decided to give pumpkin sculpting a try. Instead of the one-dimensional triangle eyes and square-tooth grins most people give a jack-o’-lantern for Halloween, Mike quickly realized sculpting the firm fruit is all about subtraction.

“You scrape away parts of the pumpkin to gradually reveal the face hidden beneath,” says the architect. “If you cut too much away you usually have to rethink the entire idea.”

Often large ears, tongues, big noses and other pieces of pumpkin have been carved and glued on to the main pumpkin to add more depth to a sculpture. 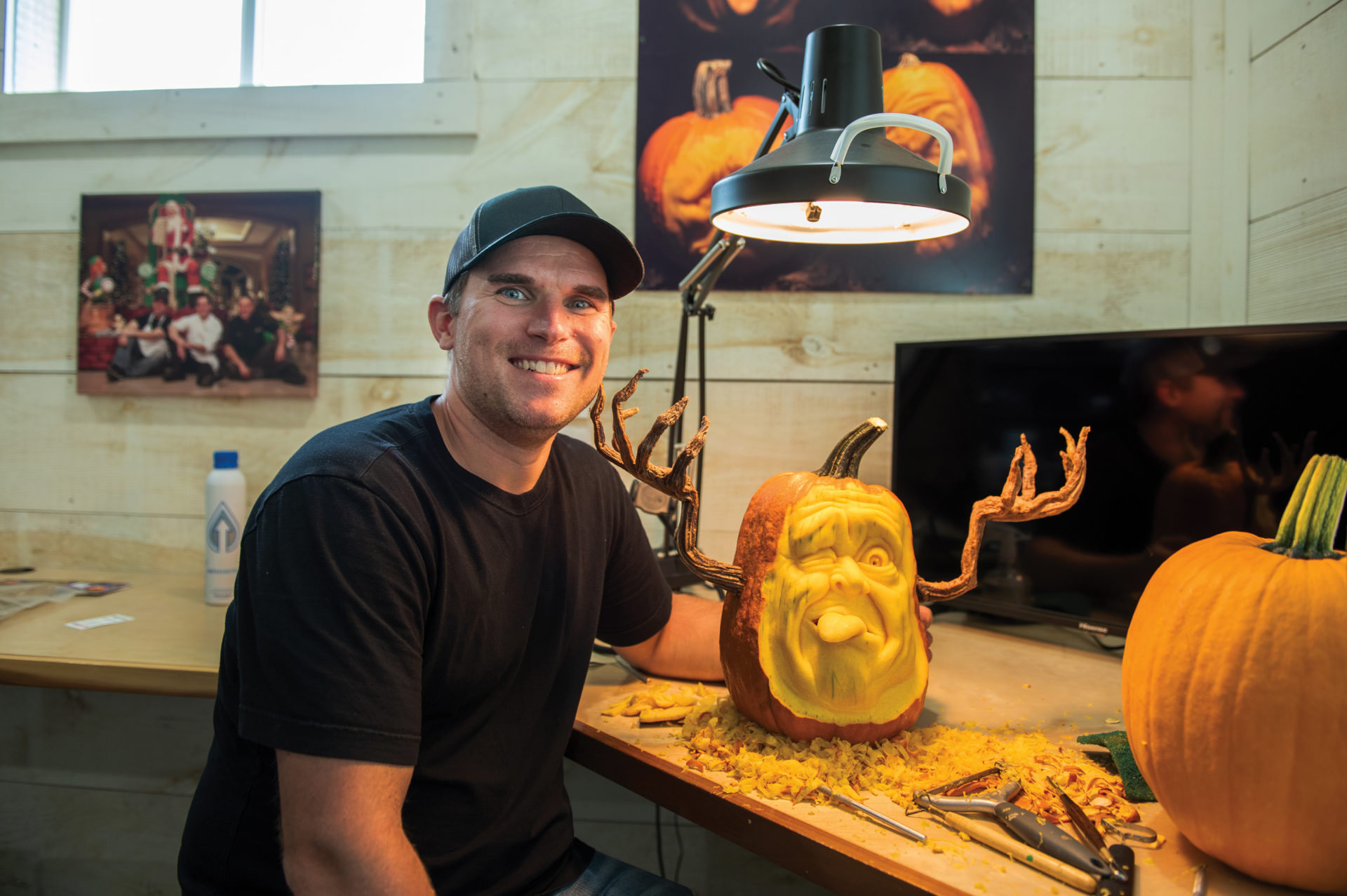 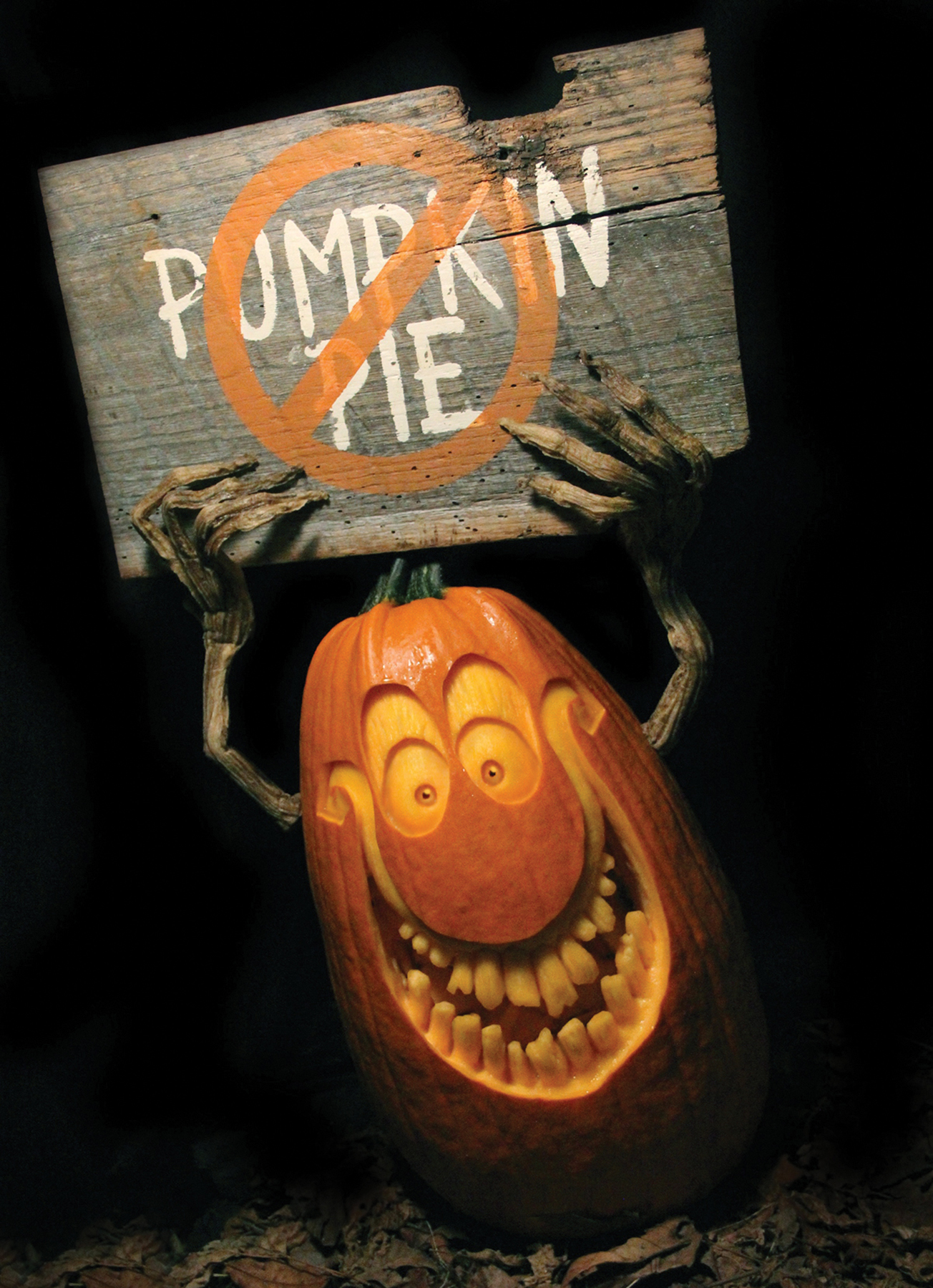 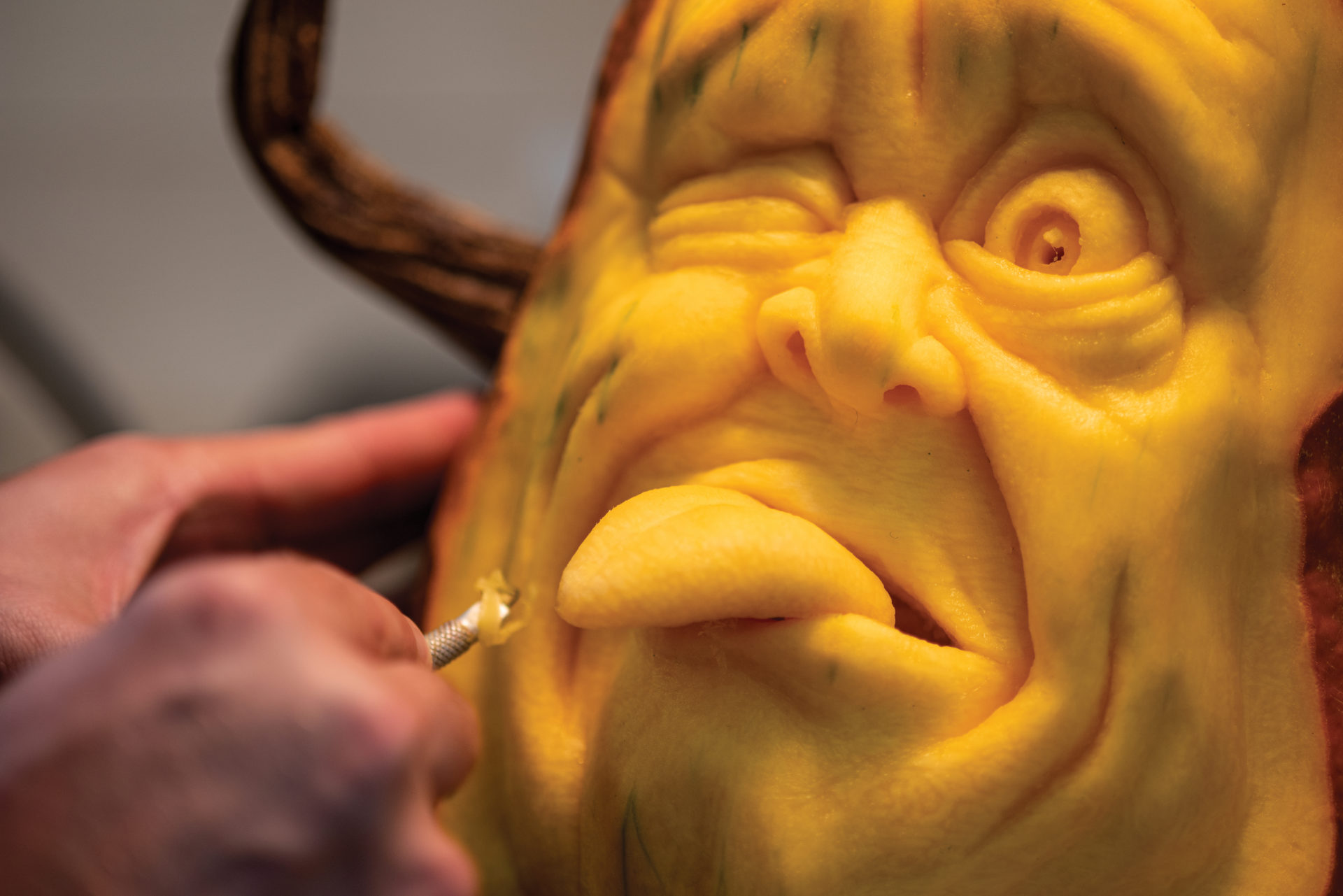 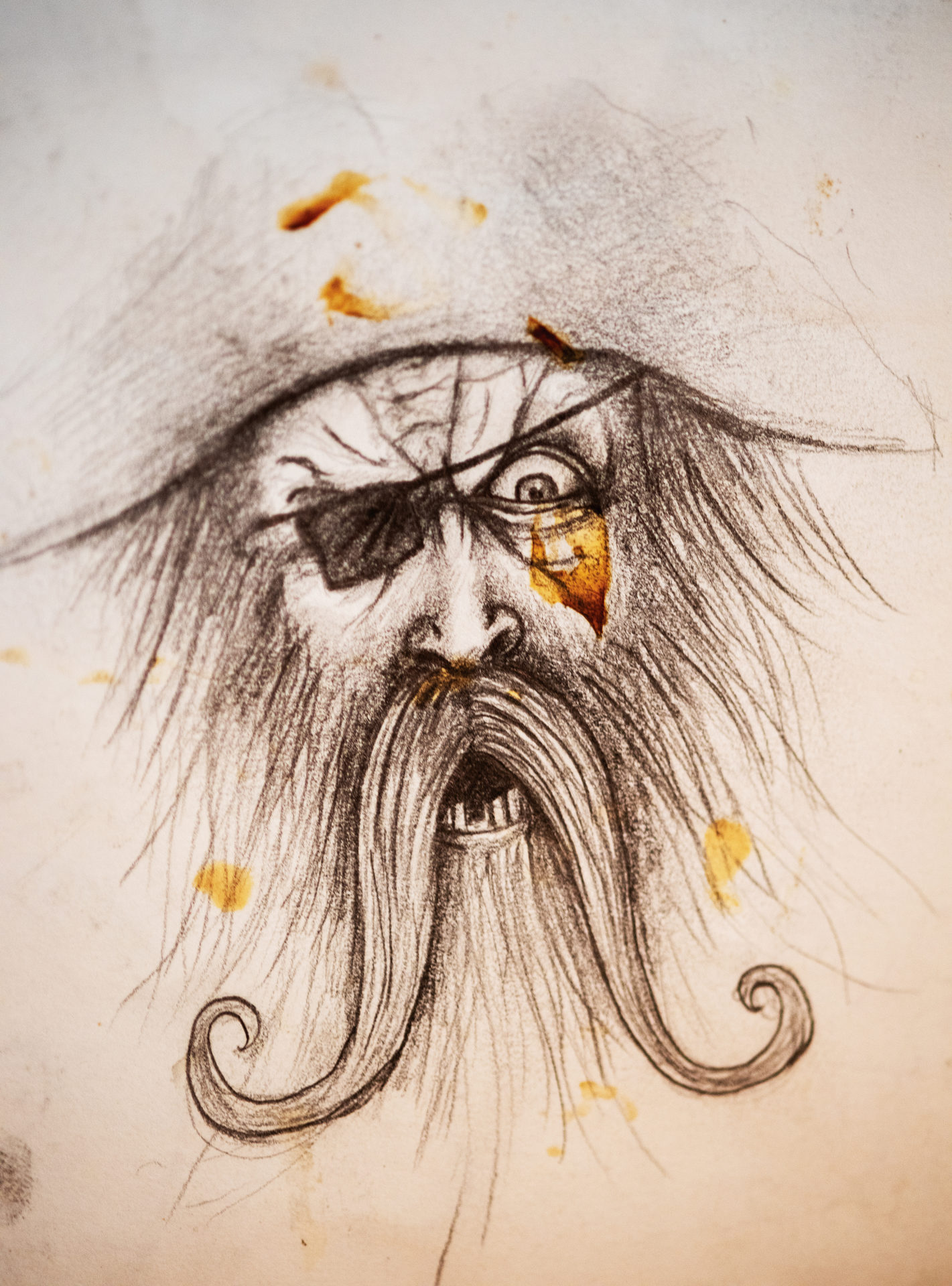 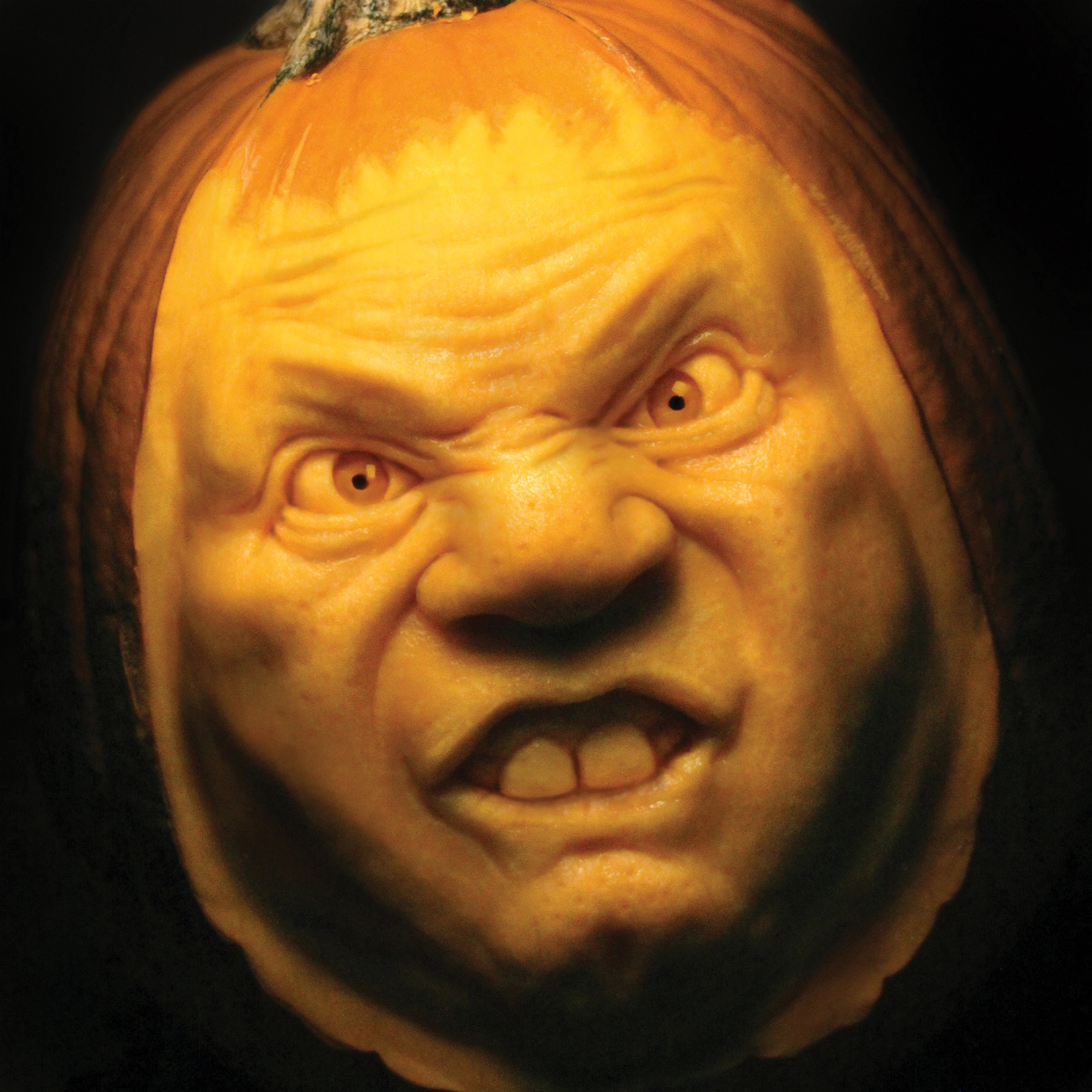 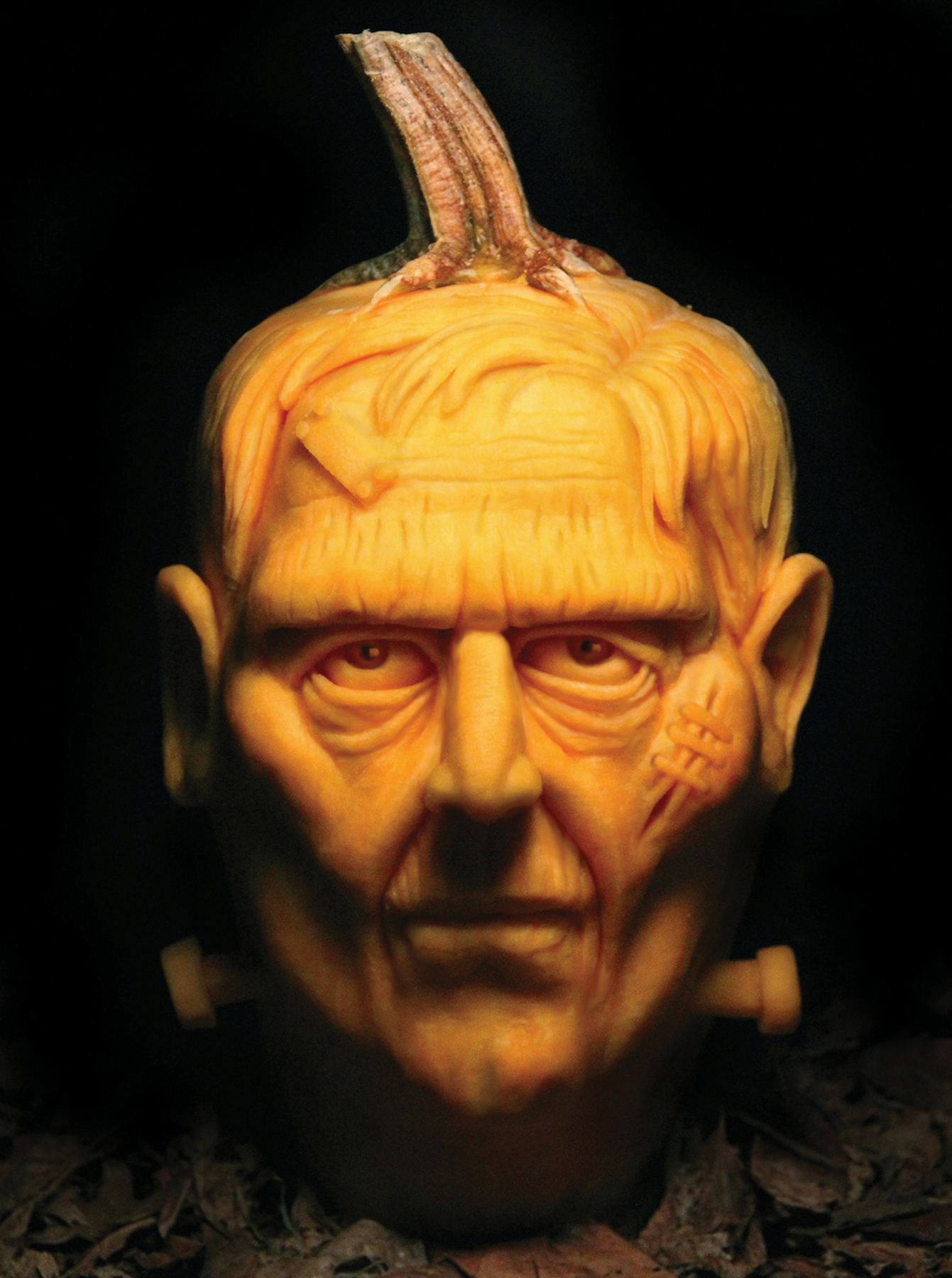 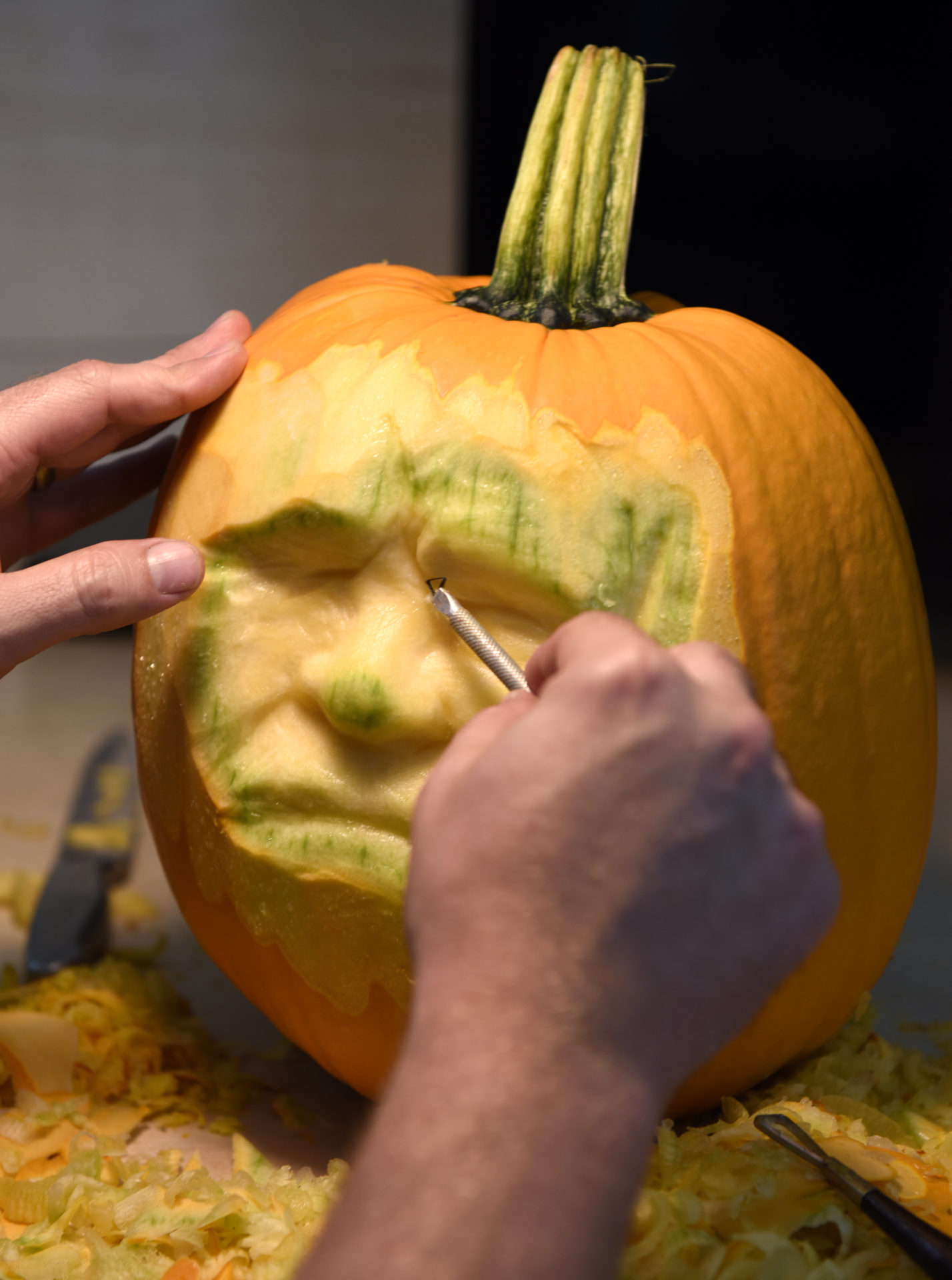 Between his day job, helping his wife, Patti, with her successful residential design and decor business, Simply Inspired Co., and playing with their four boys, Mike tries to carve out some time for his pumpkins. While he might carve a potato or squash or even dabble with creating clay figures to relax, Mike doesn’t usually begin sculpting pumpkins until late August or September. Whenever possible, he tries buying the fall fruit from farmers who live in the area.

Once he began sculpting pumpkins, Mike admits he became obsessed by it all. “I’d start carving after family went to bed and I’d carve for hours. But once you start, it’s really hard to find a stopping point because pumpkins don’t last forever.”

To pause in the middle of a carving Mike chills the pumpkins, often placing a damp cloth over the face to keep the surface moist.

Like most artists, Mike has tried every carving tool available but finds pottery tools and homemade carving tools work best. Need to smooth the skin down a bit? Get out a household scouring pad. “Some of the best things to work with are things you probably already have,” says Mike.

Mike began sharing his work on Instagram and Facebook and in 2016 his shares paid off. His work was noticed by Food Network and they contacted him to ask for an audition video. That led the architect to join the seventh season of the show “Halloween Wars,” a reality competition featuring six teams that compete by creating spooky but fun holiday themed work. The winning team — a sugar artist, baker and carver — split a sweet $50,000 after five very competitive episodes.

“When I was selected to go on the show I had no expectations of winning,” Mike says. “But our team, Team Ghoul’d, won. It still seems like a dream some days.”

The Missourian was invited back to join a new team for the ninth season of the reality show but the team didn’t win that season.

In 2018, Mike was invited to help transform a 2,077-pound pumpkin from the Elk Grove Giant Pumpkin Festival held in California. Their job? To transform the behemoth fruit into the world’s heaviest jack-o’-lantern, which they did.

“It took us about 24 hours to carve a face into the massive pumpkin,” Mike recalls, “But our efforts paid off because the pumpkin still holds the Guinness World Record as the largest carved jack-o’-lantern.”

Mike says before carving the giant pumpkin they had to cut a hole in it and gather all the seeds for the grower because “It’s all about genetics when you grow them that big. Those seeds are worth like $1,500 each!” the sculptor adds.

Several times Mike’s been invited back to California to help carve huge Christmas exhibits for a five-star resort with his former team members. One time the modeling compound was chocolate, with Santa and his elves being life-size and delicious.

When he has time, Mike still enjoys being hired to sculpt for large parties and events every fall. “But I’d love to carve at some place like Universal Studios for a big Halloween bash. And if I could get a place to provide me with giant pumpkins, I’d love to start doing 3D sculpting on a larger scale,” says the architect.

Mike says practice makes perfect when it comes to this type of pumpkin carving. “The biggest thing is to use the right tools because if you don’t, this can be a very challenging hobby,” says Mike. He also says to buy as hefty a pumpkin as possible. “If the pumpkin’s walls are too thin you won’t have a lot to work with.”

Mike turns toward the mirror again and raises an eyebrow, then turns toward his current creation. “I really am lucky,” he says. “This is just one super cool hobby that’s taken me some interesting places.”