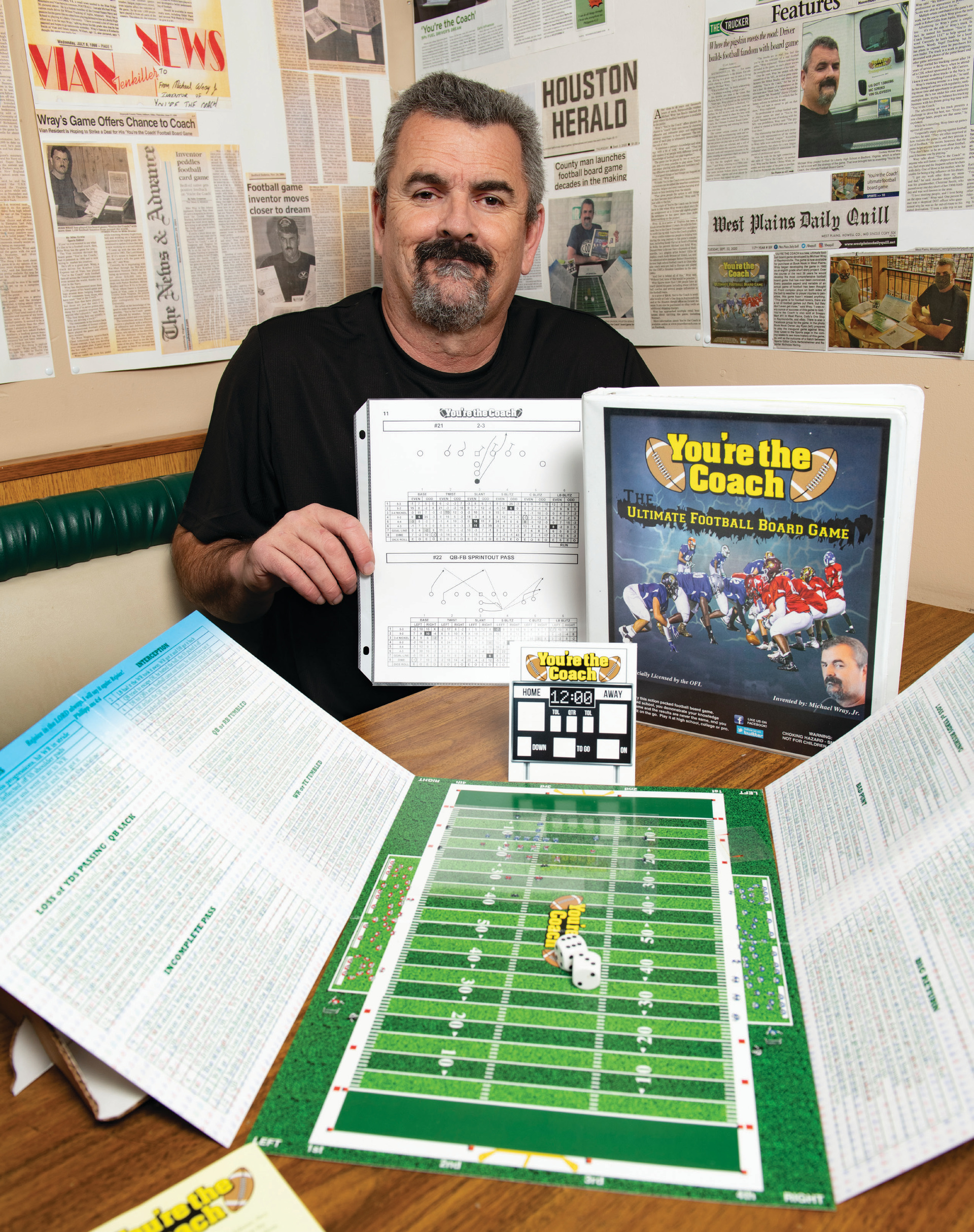 Football fans call the play in new board game

If you’re guilty of being a Monday morning quarterback after Sunday’s big game, you’re in good company — and that’s not necessarily a bad thing. Raymondville football fan Michael Wray Jr. has been considering statistics, questioning bad calls and celebrating game-winning plays every day of the week for almost 40 years. For him, it wasn’t time wasted but rather perfected on paper in the form of You’re the Coach, which Michael dubs “the ultimate football board game.”

“When coaches play it their eyes pop out of their heads,” Michael says. “It’s pretty overwhelming.”

The game’s origins date to the fall of 1982. Michael was doing a homework assignment, watching Monday Night Football and idly playing with a set of dice when inspiration struck. “Once I realized I could come up with results for the offense and defense, I was up for hours,” Michael recalls. “I don’t think I finished the schoolwork.”

A football fanatic in Bedford, Virginia, Michael went out for the Liberty Minutemen the next school year, playing on the defensive line through his high school career. Growing up in his hometown — a community memorialized for having lost proportionally the most U.S. soldiers on D-Day — had another effect on Michael’s future. He served in both the Army and Navy and never quit playing or tweaking his invention. His military experience is reflected in some of the game’s material, which pays tribute to fallen veterans and former football players. Michael had plenty of opportunities to field test his prototype with fellow soldiers and sailors. He even played his commanding officer while stationed on the USS Nassau (LHA-4).

“I took it easy on him though, because I didn’t want him in a bad mood,” Michael says with a laugh. “It was 9-8 at halftime. If I ever see him again, I’d love to finish that second half.”

Now an over-the-road truck driver, Michael estimates he’s put more than 34,000 hours of research into You’re the Coach. He’s picked the brains of coaches and former players to make the tabletop experience as accurate a representation as possible of the gridiron. Michael credits Joplin artist Robert Gillis with capturing the look of the game, from the field to the player markers to the coaches’ play sheets — all contained in the perfect coach accessory: A sturdy three-ring binder. The end result is a board game that can be played solo — “playing against the coach,” as Michael refers to it — or head-to-head with a friend.

Players match wits choosing offensive and defensive plays to try and outsmart their opponent. Gameplay involves selecting plays and rolling dice, which determine the probability of each play’s success or failure. All are basic strategies any high school football player would recognize, Michael adds. He and his fiancee, Chrissy White, plan to add modern strategies such as air raid offense and the run-pass option in an updated edition. Every down comes with an instant replay via another dice roll, which describes what occurred on the field, from a Hail Mary touchdown to an embarrassing fumble.

“It’s there to help you visualize what happens on the play,” Michael says of the entertainment factors listed on the board’s bleachers, “because a person’s mind is way stronger than a video game.”

For the stats-oriented fan like Michael, there are multiple levels of additional detail available. Players in a college or pro matchup have a power modifier, adding to their yardage on successful plays. But beware the fatigue factor, which may force a substitution if your star players run out of gas or get injured. Everything from the weather to the crowd can be determined from a dice roll, adding troublesome wind to a field goal attempt or rowdy fans giving the coach grief over a botched play. Fans of role-playing games such as Dungeons & Dragons will enjoy the ability to create an entire roster of players from scratch.

If you’re truly going to play the game the way the inventor intended, then you’d better be prepared for some real world penalties as well. Throw an interception? Get ready to run in place to simulate chasing down your turnover. Lose the game and you’re looking at two minutes of all-out situps.

“I based a lot of that off our military fitness tests,” Michael adds. “It’s also optional, but the cool thing about it is it keeps you involved.”

With some help from Rolla-based Scotts Printing, Michael made the first 500 copies of You’re the Coach this summer. The game is available from online retailers and stores in Raymondville, West Plains and Mountain Grove. With an ultimate goal toward one day playing the hosts of the ABC television series “Shark Tank,” Michael is happy to continue introducing new players to the game he loves.

“The dice bring it to life, but you’re making the decisions,” Michael says. “When you finish it, I want you to feel like you just finished playing the actual game.”